Watt quote-tweeted a now-deleted tweet from someone who said "Pretty sure you won't see @JJWatt taking a knee ..." 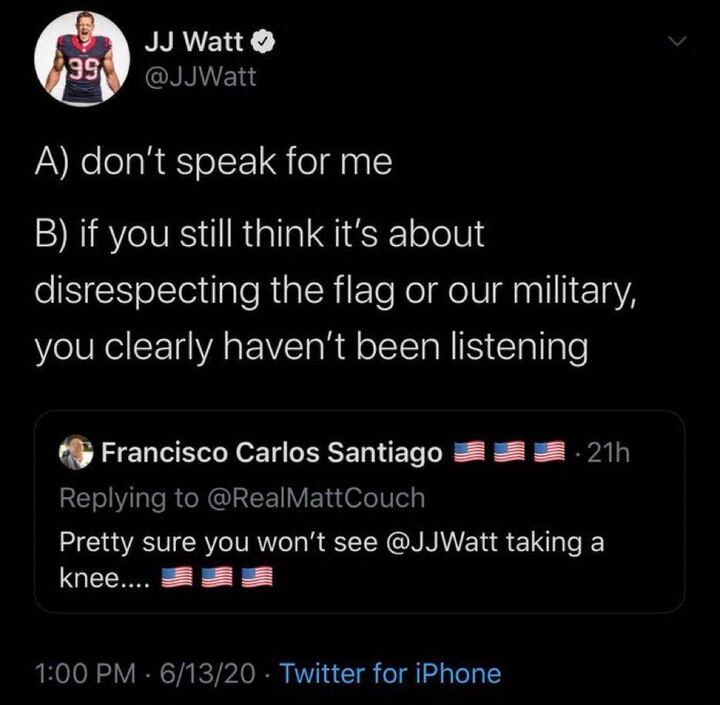 Mayfield responded to an Instagram user who said "Please tell Browns fans you're not going to be kneeling this season" by saying "I absolutely am."

After receiving backlash on social media, Mayfield posted a lengthier statement on his Instagram story. 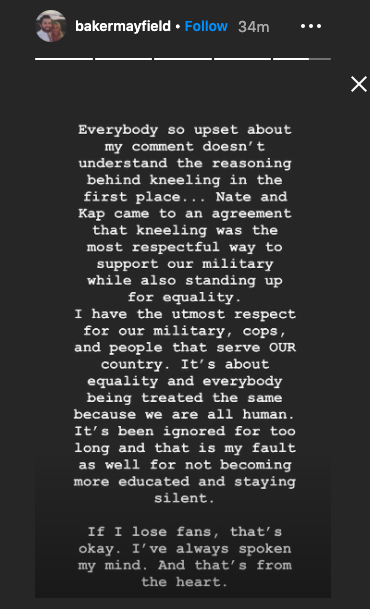 During a protest at Duncan Plaza on Saturday, protesters in New Orleans took down a statue of John McDonogh, a merchant and slave owner, and rolled it into the Mississippi River.

Mayor LaToya Cantrell released a statement through her social media channels saying, “The City of New Orleans rejects vandalism and destruction of City property. It is unlawful.”

After protesters damaged the statue, they drug it into the street and loaded it onto one of two trucks, according to a statement released by the New Orleans Police Department. The trucks took the statue to the banks of the Mississippi River and the statue was then thrown into the river, according to police.

NOPD said police have apprehended the drivers of the trucks.

Here are two videos showing the struggle between Rayshard Brooks and police before he was fatally shot.

One video is surveillance video provided by the Georgia Bureau of Investigation.

The other is eyewitness video shot from a cell phone.

Darryl “TNT” King, a protester in Seattle, spoke with CNN's Dan Simon Sunday in the part of the city that has been overtaken by protesters.

"All I gotta say to Trump is Trump you got all the Secret Service in the world, come down here and see for yourself," King said. "Get in that plane and come see for yourself. Come look at what’s going on down here, come talk to us."

King also said it's hard for Trump to emphasize with protesters because Trump has never been in their position, poor and/or oppressed.

Los Angeles Lakers center Dwight Howard said in a statement he believes the NBA and other forms of entertainment are an unneeded distraction from important issues facing the nation and the black community right now. Howard states that as much as he would like to resume the NBA season, he feels that the opportunity for unity among "my people" is a bigger priority.

"I agree with Kyrie (Irving). Basketball, or entertainment period, isn’t needed at this moment, and will only be a distraction. Sure it might not distract us the players, but we have resources at hand majority of our community don’t have. And the smallest distraction for them, can start a trickle down effect that may never stop. Especially with the way the climate is now. I would love nothing more than to win my very first NBA Championship. But the unity of My People would be an even bigger Championship, that’s just to (sic) beautiful to pass up. What better time than now for us to be focusing on our families. This is a rare opportunity that, I believe, we as a community should be taking full advantage of. When have we ever had this amount of time to sit and be with our families. This is where our Unity starts. At home! With Family!! European Colonization stripped us of our rich history, and we have yet to sit down and figure us out. The less distractions, the more we can put into action into rediscovering ourselves. Nations come out of families. Black/African American is not a Nation or Nationality. It’s time Our Families became their own Nations. No Basketball till we get things resolved."

This statement comes as the NBA and the NBA Players Association work to finalize a comprehensive season restart plan following the NBA Board of Governors' approval of a plan to resume the NBA season with 22 teams competing in Orlando, Florida.

"For more than two decades, I have served alongside some of the finest women and men in the Atlanta Police Department. Out of a deep and abiding love for this City and this department, I offered to step aside as police chief. APD has my full support, and Mayor Bottoms has my support on the future direction of this department. I have faith in the Mayor, and it is time for the city to move forward and build trust between law enforcement and the communities they serve."

In a statement, the court writes that it ended the ban on gatherings of more than 10 people, for the purpose of protesting, after calls from organizations, like France’s Human Rights League, that contested the rules, which are part of France’s coronavirus state of emergency.

The Court relied on recommendations from the High Council for Public Health, which said there was no reason to restrict movement "as long as some measures are respected (distance of 1 meter or wearing a mask in particular)."

The Council of State added that police still have the authority to ban protests in instances where there is a "disturbance to public order" or for health reasons, and protests of more than 5,000 people are still banned.

Here is her full statement:

"Well I think it's just stating the facts. We are in a health emergency right now. I think the fact that we have made this clear in terms of 'people should not gather', 'they should not protest', the police are saying this every single day as well, really speaks to a very real public health message that we are restating to the British public. I would also say one other thing, right now we are seeing the silent law-abiding majority - the British public - who are staying at home, who are following the rules, and who are thinking of the safety and the public health of others following the rules very clearly. I would urge everybody else not to protest, not to participate in these mass gatherings. This is a threat to public health, but also, we're seeing a small minority use these gatherings to subvert particular causes and to participate in thuggery and violence, that is simply wrong and as I've said they will face the full force of the law but I think we should all be very mindful of the fact that these gatherings will spread this disease and put people's health at risk, and that is simply not acceptable and we want to prevent that."

Rodney Bryant will become the interim Chief of Police in Atlanta.

Bottoms also called for the termination of an officer who killed Rayshard Brooks. Brooks was shot and killed at a Wendy’s drive-thru in south Atlanta on Friday night after he resisted arrest and a struggle over an officer’s Taser ensued, according to a statement from the Georgia Bureau of Investigation.