Our live coverage of the Black Lives Matter protests has moved here.

The mayor of a mostly white New Jersey township is apologizing for his comments during an anti-discrimination protest organized by residents of a neighboring community.

Protesters challenged Clark Township Mayor Sal Bonaccorso at a June 6 rally to say that he was "pro-black" and he responded by saying, "I am pro-black for all the good black people that I know in my life."

That didn't go over well with the crowd, and several people could be heard expressing their disapproval in a video from the event.

"Hey folks, listen, I can't say I'm for anybody if I don't know you. I'm for people. Good people, law-abiding, hard-working, good family, good friends, people with good intentions," he said. "If you're black great, if you're white, great. If you're Hispanic, great."

"It doesn't matter. I judge people on how you judge me. If you wanna be my friend and stick your hand out, I'll shake your hand. I'll look you in the eye."

He released another statement on Wednesday, writing online that "If I didn't care. I wouldn't be here."

"My goal when I spoke was to reiterate and affirm that we want Clark Township to be a place where everyone feels welcome. Looking back on what I said and seeing some of the public reaction to it, I see that I may have fallen short of that goal and I would like to clarify my answer to a question that was posed. An attendee asked me, 'Are you pro black?' The answer is of course, and unequivocally, yes. I also truly believe that Black Lives Matter," he said.

Across the United States, statues of Christopher Columbus are being taken down as protesters point to his role in violent colonization at the expense of Indigenous communities.

The conversation around race, history and violence is taking place around the world as well -- in New Zealand, a statue of a British naval captain who fought land wars with Maori was removed from public grounds after a formal request by a tribal organization.

The Hamilton City council said they decided to remove the statue of Captain John Charles Fane Hamilton after "it had become clear the status was likely to be vandalized," said the city publication "Our Hamilton."

The city was renamed after Captain Hamilton, who was a commander of the Esk and was killed at the Battle of Gate Pa, according to a guide produced by the city council.

“I know many people – in fact a growing number of people – find the statue personally and culturally offensive. We can’t ignore what is happening all over the world and nor should we. At a time when we are trying to build tolerance and understanding between cultures and in the community, I don’t think the statue helps us to bridge those gaps," said Mayor Paula Southgate, according to "Our Hamilton."

Some context: New Zealand has its own history of violent colonization by white Europeans.

Recent years have seen increased scrutiny on Captain James Cook, the preeminent British explorer of the Pacific in the eighteenth century, whose arrival opened the way for often brutal imperialism and colonialism.

Activists in New Zealand and Australia have pushed highlight this bloody history; last fall, a Maori tribe banned a replica of Captain James Cook's ship from docking at its village during a national commemoration of Cook's first encounter with indigenous New Zealanders.

Chicago Mayor Lori Lightfoot told CNN on Thursday night that the police officers filmed lounging in a congressman's office on June 1 as protests and looting occurred throughout the city was "one of the most disgraceful, disrespectful things" she has ever seen.

"We are absolutely not going to tolerate it," she said.

Asked how difficult it is to discipline officers, she said, "They do have extraordinary due process rights, which is in and of itself a problem that we've go to fix."

"We've got to start by licensing police officers, and I called for that today. We've got to change state laws so that we have a baseline of conduct that is acceptable," she said. "It is all about the will and really seizing this moment to take on the police contracts, and other things, that are an impediment to reform and accountability."

What happened: 13 Chicago police officers lounged and slept in the congressional campaign office of US Rep. Bobby Rush on June 1, while protests raged citywide.

The officers, who included three supervisors, were seen on video sleeping in the office, eating the congressman's popcorn and talking on the phone, Rush and Lightfoot said.

The incident came to light after Rush reviewed security camera footage from his office, the mayor explained at a news conference.

The Portsmouth Police Department has requested that State Police conduct the investigation into that bodily injury. Any and all charges to be placed will be determined by the Commonwealth Attorney’s Office for the city of Portsmouth, according to State Police.

Portsmouth Mayor John L. Rowe, Jr. said the police had done the right thing in confining vandalism to one piece of public property, thus protecting lives and the nearby private property.

He also noted that in 2017, the city council adopted a resolution to move the Confederate monument to a cemetery as soon as the governing laws clearly permitted its relocation. According to Rowe, that resolution remains in effect.

Also addressing the incident in Portsmouth, Norfolk Mayor Kenny Alexander issued a statement last night, asking for peaceful protests and safety in his own city, saying “an individual was seriously injured in an attempt to remove a statue in Portsmouth. We are praying for his full recovery and hope that this incident will not be repeated in other localities.”

Some context: In the past week, calls have been growing around the country to defund, demilitarize, and in some cases, even dismantle the police.

What does this mean? It's as straightforward as it sounds: Instead of funding a police department, a sizable chunk of a city's budget is invested in communities, especially marginalized ones where much of the policing occurs.

In some places, the protests have actually worked. A veto-proof supermajority of the Minneapolis city council pledged to defund and dismantle the police force.

New York Mayor Bill de Blasio announced he would move funding from the NYPD to youth and social services.

And Los Angeles Mayor Eric Garcetti agreed to slash between $100 million to $150 million from the proposed funding for the LAPD budget.

The ongoing protest in Seattle around the East Precinct police station is not a threat to public safety, said city mayor Jenny Durkan on Thursday night.

“We’ve got four blocks in Seattle… that is more like a block party atmosphere,” Durkan told CNN. “It's not an armed takeover. It's not a military junta.”

Seattle Police Chief Carmen Best expressed frustration earlier today that protesters had demanded the removal of police barricades, only to erect their own.

The police building was boarded up and emptied, and Durkan says there is no timetable yet for officers to return. “I don't know. We could have the Summer of Love,” said Durkan.

She also responded to President Donald Trump, who had tweeted earlier today, "Take back your city NOW. If you don’t do it, I will.”

"The fact that he thinks he can just tweet that, and not have ramifications, is just wrong," Durkan said. "Our country was born out of a protest. The right to gather, the right to protest, the right to challenge government when it is wrong, is our most fundamental constitutional right."

A Bronx teenager was allegedly tased on the face multiple times by police who mistook him for a rioter, his lawyer has told CNN.

Jahmel Leach, 16, was left with facial fractures and damage to his jaw, said his lawyer, Mark Shirian.

The New York Police Department did not immediately answer questions about Leach’s arrest, saying the matter was under internal review.

A source with knowledge of the investigation told CNN that a 16-year-old was arrested in the Bronx on June 1, after police saw the person pour an unknown liquid on a trash pile in the middle of the road and light it on fire.

According to his lawyer, Leach was walking home at the time, and was not part of any protests or rioting. Leach denies the allegations against him and has not been charged, Shirian told CNN.

"They had no grounds to arrest him," Shirian said. "Are we going to allow them to police the youth in that way?"

Leach's family gave a press conference on Thursday, with supporters wearing shirts saying “Justice for Jahmel Leach." Leach’s family alleged that he was released to his parents only partially clothed, in a hospital gown.

“I demand justice, and I won’t stop until I get it,” Leach’s mother Daisy Acevedo said during the news conference.

Mayor Bill de Blasio called for the internal police investigation to be completed with “speed and transparency.”

When Minneapolis-based activist Michelle Gross learned the name of the officer who planted his knee on the neck of George Floyd until after he lost consciousness, she wasn't surprised.

Gross, who has tracked 20 years' worth of complaints against Minneapolis police, identified the officer by cross-checking the badge number seen in the video of Floyd's death against her records. It belonged to Derek Chauvin -- a familiar name.

"When I saw the name I said, 'Oh, him,'" Gross told CNN. "When you start to see those same officers over and over again with multiple complaints, their names lodge in your brain."

Gross, of the non-profit Communities United Against Police Brutality, argues that Chauvin -- who had 18 prior complaints filed against him and received reprimands for only two of them -- exemplifies the way problematic officers repeatedly thwart accountability in Minneapolis.

Punishment is rare: Only about 1.5% of complaints filed against Minneapolis police have resulted in suspensions, terminations or demotions between 2013 and 2019, according to a CNN analysis of data from the city's Office of Police Conduct Review, which investigates complaints.

That office, which is separate from the police department but works with officers to resolve complaints, received about 2,013 complaints against police within its jurisdiction in that time. 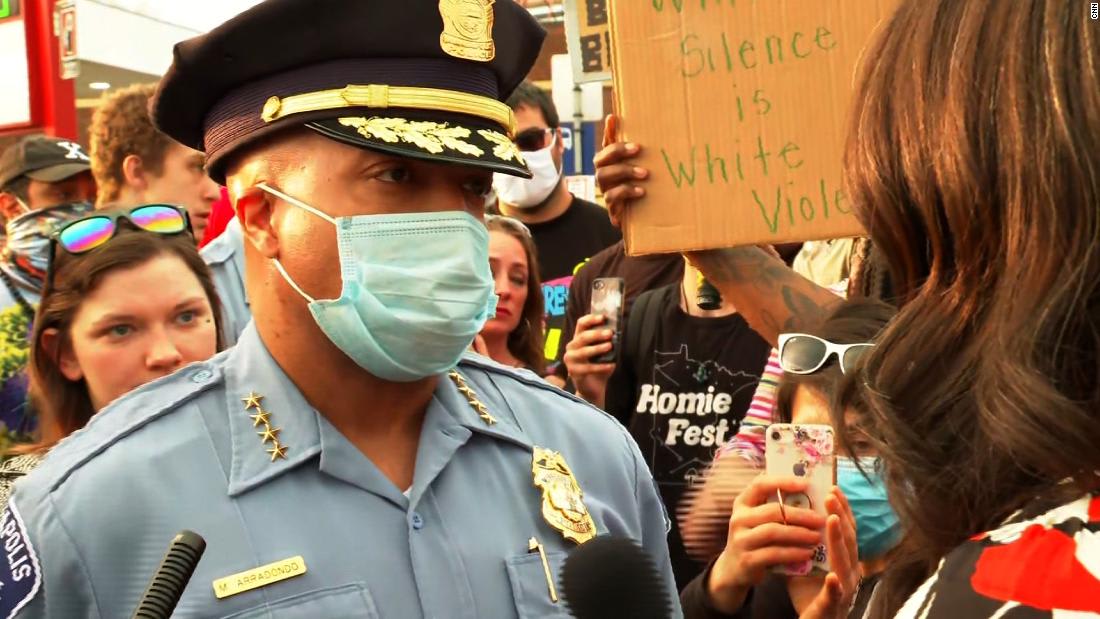