US President Donald Trump tweeted about the protests in Washington, DC, tonight.

"Much smaller crowd in DC than anticipated. National Guard, Secret Service, and DC Police have been doing a fantastic job. Thank you!" he tweeted.

Fact check: There were tens of thousands of people on the streets in DC today, in what appears to be the biggest gathering in the city since Floyd's death, said CNN Correspondent Alex Marquadt, reporting from the scene.

Things stayed peaceful all day, with no reported clashes with police. Reflecting the more peaceful nature of the protests, there is no curfew tonight.

There was also a much lighter police presence, in sharp contrast to earlier in the week, when National Guard troops and federal agencies swarmed the city. Earlier today, the commanding general for the DC National Guard told CNN that the thousands of out-of-state troops could start leaving the city as soon as Monday.

There's a growing group of dissenters who believe Americans can survive without law enforcement as we know it. America, those dissenters believe, may even be better off without it.

What does this actually mean? This proposal means instead of funding a police department, a sizable chunk of a city's budget is invested in communities, especially marginalized ones where much of the policing occurs.

The movement is a spectrum: Some supporters want to reallocate some, but not all, funds away from police departments to social services. Some want to strip all police funding and dissolve departments.

Both interpretations center on reimagining what public safety looks like.

It also means dismantling the idea that police are "public stewards" meant to protect communities, since many black communities and people of color feel unprotected by police, said Philip McHarris, a doctoral candidate in sociology at Yale University and lead research and policy associate at the Community Resource Hub for Safety and Accountability.

What about implementing reforms? Police trainings and body cameras haven't brought about the change supporters want -- and often, communities don't feel safe calling the police when they face real threats of danger and violence. Growing up, McHarris instead relied on neighbors who helped him navigate these threats.

What if, he said, those people could provide the same support they showed him on a full-time basis?

So where would the funds go? Instead of the police force, city funding could go toward social services for mental health, domestic violence and homelessness, among others.

Those dollars can be used to fund schools, hospitals, housing and food in those communities, too -- "all of the things we know increase safety," McHarris said. 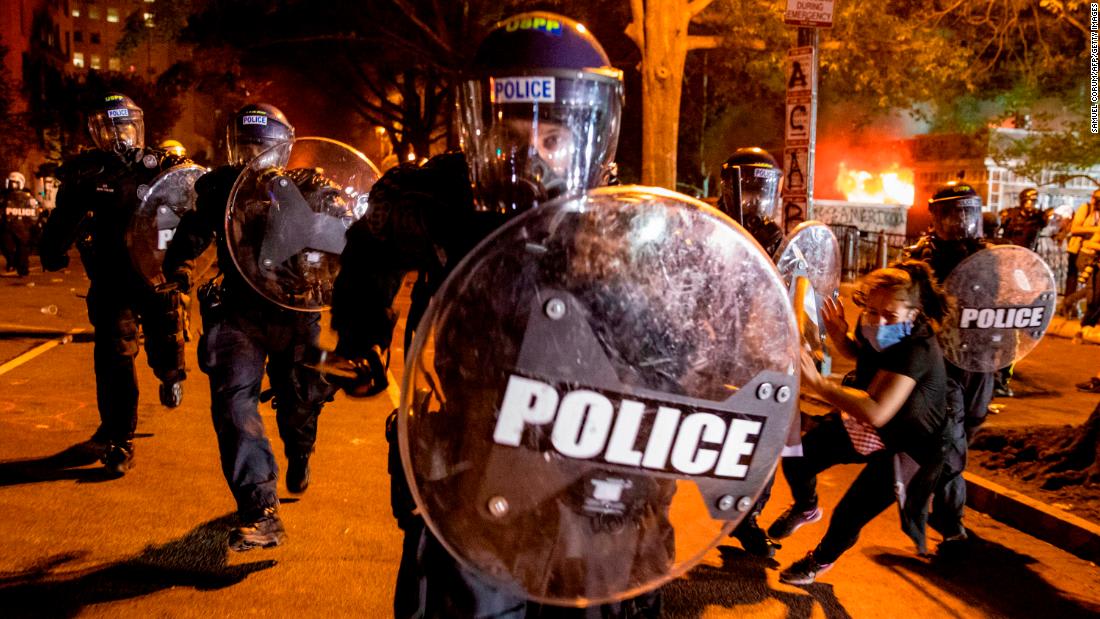 There's a growing call to defund the police. Here's what it means

In Seattle, Washington, police and protesters are clashing near Capitol Hill.

Police, standing on the other side of a fence, appear to be trying to clear protesters by using flash bangs on the street. There is smoke hanging in the air.

This comes after the Seattle police chief ordered the suspension of tear gas in crowd management on Friday.

Earlier today in Atlanta, the marches saw pockets of joy, as protesters danced to blaring music on the crowded streets.

They danced to Childish Gambino's "This is America," and did the electric slide dance near Centennial Olympic Park in the city's downtown.

The mood was light, with cheering and applause. Families marched with children; at one point, a live band even played on top of a parking garage.

“Music has completely changed the atmosphere, as you can see," the band director told CNN. "As soon as we started playing, the crowd just immediately came this way. We just want justice. We understand what’s going on. Music will bring togetherness and everybody is here now."

CNN Correspondent Martin Savidge said: "We went from a street protest to what is now a party in the street -- but still with the consciousness of what this is all about. You can dance and still chant 'Black Lives Matter.'"

It's a stark contrast to just a week ago. Last Friday, there was chaos on the streets of Atlanta, when demonstrators lit a car on fire and broke windows at the CNN Center. Protesters threw firecrackers at police and smoke bombs into buildings.

It's past curfew in the city of Buffalo, in upstate New York, but there is still a small group of protesters on the street.

They're gathered in Niagara Square, in the city's downtown -- where police officers pushed over and injured a 75-year-old man, Martin Gugino, during protests on Thursday night.

Video of the demonstration shows a row of officers walking toward Gugino and two pushing him. His head bleeds onto the sidewalk as officers walk past him, some looking down at him.

Gugino was hospitalized with a head injury.

New York Gov. Andrew Cuomo called the incident "wholly unjustified and utterly disgraceful," and said on Twitter that "police officers must enforce — NOT ABUSE — the law."

Officers plea not guilty: The two officers were suspended without pay, and pleaded not guilty earlier today to charges of assault in the second degree.

Following their suspension, 57 Buffalo police officers resigned from the force's emergency response team. They did not resign from the force.

In New York, protesters are marching through Greenwich Village in downtown Manhattan. Curfew was at 8 p.m., but there isn't a heavy police presence tonight, and police haven't been enforcing the curfew with arrests like earlier this week.

The protesters have been marching for hours now. Some of the organizers and leaders keep morale up with call-and-response chants like "Do not engage, we are united, we are peaceful" and "United, the people will never be defeated."

In Washington, DC, crowds are massive tonight -- perhaps the biggest since they began, said CNN Correspondent Alex Marquadt on the scene.

Curfew was lifted earlier this week, and protests remain peaceful. People are gathering on the edge of Lafayette Park, close to the White House, taking photos with a new street sign that reads "Black Lives Matter Plaza."

There are some members of law enforcement and National Guard troops in sight -- but nowhere near the aggressive numbers seen earlier in the week, Marquadt said.

In Los Angeles, curfew has also been lifted and protests remain peaceful, with the mood light tonight.

"The community vibe is really notable," she said. "There's a lot of folks walking around handing out snacks, masks, hand sanitizer, food for the demonstrators ... One of the beautiful things on a human level we've seen is, as they go past various apartment buildings, people come out to their balconies, start clapping pot and pans in solidarity of the protest."

The Black Lives Matter movement and ongoing US protests have struck a chord with many around the world -- perhaps most notably in Paris, where protesters have been demonstrating throughout the week, and are on the streets again on Saturday.

The Paris protesters are marching in solidarity with those in the United States -- but also to protest racial injustice and police brutality in their own country.

At least 20,000 people demonstrated in Paris on Tuesday, in support of the family of Adama Traoré, a black man who died in 2016 in Paris police custody.

Traoré died on his 24th birthday after he was taken into police custody for fleeing an identity check.

His sister, Assa Traoré, says police told her his final words were "I can't breathe."

Adama and George Floyd "died in the exact same way. They carried the weight of ... three cops on them. They had the same words," she told CNN.

The protests on Saturday: Earlier in the day, several thousand people demonstrated in Paris as well as other French cities.

Traoré's name appears often in these protests, on signs and in chants -- but protesters here have also adopted some of the slogans from their counterparts in the US, like "No justice, no peace."

"You really sense this is a movement that's been given inspiration," said CNN Correspondent Melissa Bell at the scene.

The protests are seeing large crowds gather in close quarters across the country -- and, experts warn, could lead to a second wave of Covid-19 infections.

"Honestly, I am worried about a new spike. But I was worried about this new spike well before there were protests," said epidemiologist and former Detroit health commissioner Abdul El-Sayed.

But, he added, "I don't want to folks to think that we're pitting public health against the protests -- because we know that in excess of 83,000 black Americans die every year because of racism and that itself is also a public health issue."

Instead of framing it as a choice between protesting and coronavirus, here are some things he suggested protesters do to keep themselves as safe as possible:

Authorities have a responsibility to address these concerns too, he said: keeping people tightly packed together in vans or cells can be dangerous for potential infection.