The Minneapolis City Council passed a restraining order against the city's police department at an afternoon meeting.

"We cannot let George Floyd's death be in vain," one commissioner said.

The restraining order is temporary and will still need a judge’s approval before being enacted.

The order bans the use of chokeholds by police and also requires police to report and intervene if the banned practice is used.

Additionally, the Minneapolis police chief must authorize the use of crowd control weapons, such as rubber bullets and tear gas, according to the order.

"This is a moment in time where we can totally change the way our police department operates," Mayor Jacob Frey said.

Frey said there were difficulties in the past to make change like this and "now we can finally get this right."

In the order, which was obtained by CNN, the city council said it hopes to build "toward systematic change."

Velma Korbel, director of civil rights for Minneapolis, said she hopes "state legislature will be compelled to act, to change the laws that impede the city for making the deep systemic change required, and the community has the demanding for decades."

Ohio Gov. Mike DeWine announced that a member of the Ohio National Guard has been removed from the mission in Washington, DC, after the FBI uncovered information that the guardsman expressed white supremacist ideology on the internet, prior to this assignment.

“While I fully support everyone's right to free speech, guardsmen and women are sworn to protect all of us, regardless of race, ethnic background, or religion. Ohio National Guard members are in a position of trust and authority during times of crisis, and anyone who displays malice toward specific groups of Americans has no place in the Ohio National Guard,” DeWine said Friday.

According to the governor, the Ohio National Guard and the Ohio Department of Public Safety are cooperating with the FBI in its investigation of the incident, and the guardsman has been suspended from all missions, effective immediately.

“Following due process, it is highly likely, when these facts are confirmed, that he will be permanently removed from the Ohio National Guard,” DeWine added.

The governor said he has directed Major General John Harris, the adjutant general of Ohio, to work with Public Safety Director Tom Stickrath to set up a procedure so occurrences like this don't happen in the future.

Secretary of Defense Mark Esper has ordered the remaining active duty troops who were brought to the Washington, DC, area to return to their home base of Fort Drum in New York, Army Secretary Ryan McCarthy said Friday.

On Thursday, roughly 700 of the 1,600 active duty troops who were brought to the Washington, DC, area were returning to Fort Bragg.

A small active duty of the “old guard” based in Arlington remain on stand by for assistance, McCarthy said.

A black officer and a white officer from the Ocean City Police Department in New Jersey took a knee alongside protesters on Tuesday.

CNN affiliate WPVI identified the black Ocean City police officer as Tyrone Rolls. He gave a passionate speech about being able to feel both sides, saying he’s not recognized as an officer when he’s not in uniform.

“I get it because I’m not recognized when I’m not in uniform,” Rolls said in the video. “I understand, I get it from both sides. But the problem is a lack of education. Our education system is failing us. We don’t teach the real American history of where it comes from. We don’t teach the ancestry of black leaders, what they went through to get here.”

The Ocean City Police Department thanked those who participated in the Tuesday protest against police brutality.

“You set the standard for the country to follow,” police said on Facebook. “You were courageous and inspiring. You have our respect and support. Your voices were heard. We join you in demanding an end to police brutality. Today, we, the OCPD, thank you and commit to work tirelessly with you to ensure real change.”

Watch the moment Rolls and his fellow officer took a knee:

New Jersey police are monitoring about 30 demonstrations today, and they are expecting upwards of 100 demonstrations across the state across both Saturday and Sunday, New Jersey State Police Superintendent Colonel Pat Callahan said Friday.

Overall protests have largely been peaceful in the state.

New Jersey Gov. Phil Murphy repeatedly urged protestors to wear face coverings, try to maintain social distancing and to get tested for Covid-19 if they can.

The number of National Guard members responding to protests and civil unrest across the country has grown to 41,500 in 33 states and the District of Columbia.

On Thursday, there were 32,400 Guard members in 32 states and District of Columbia

New York Gov. Andrew Cuomo said the Buffalo police officers who pushed a 75-year-old man at a protest Thursday should be fired.

“I would say I think the city should pursue firing,” Cuomo said at his daily presser. “When I saw the video I got sick to my stomach.”

Cuomo also said the district attorney should look into the situation for possible criminal charges and that he should move “fairly but quickly.”

“I would encourage the district attorney not to do what happened in Minneapolis, which the delay itself caused issues,” said the governor, adding, “People don’t want vaguery. They are upset and want answers.”

Some background: Two police officers in Buffalo, New York, were suspended without pay Thursday after video showed them pushing a 75-year-old man, causing him to fall back and hit his head on the sidewalk, Buffalo Police Department spokesperson Mike DeGeorge told CNN.

Cuomo said in the news conference today that he has spoken to the man.

Washington DC, Mayor Muriel Bowser unveiled “Black Lives Matter Plz NW," on the corner of H and 16th Streets, separated from the White House only by Lafayette Park. A new street sign was put up today.

This is in the same area that she also commissioned the words "Black Lives Matter" to be painted in bright yellow onto the street.

Bowser told reporters outside of St John’s Church next to Lafayette Park, that she and DC Council members were there “as Washingtonians — we simply all want to be here together in peace to demonstrate that in America — you can peacefully assemble, you can bring grievances to your government, and you can demand change.”

“We’re here peacefully as Americans, on American streets, on DC streets,” Bowser said, seeming to reference the recent clash that she has had with the federal government over their attempts to police DC streets.

President Trump held a photo-op outside St John’s Church on Monday night, after federal law enforcement forcibly cleared out protesters from Lafayette Park. On Tuesday morning Bowser told CNN “we were very shocked and quite frankly outraged” by the clearing out.

Cuomo explained in a news conference today that the reform agenda comes from the "long list of names of people we have seen who have been abused by police officers, by the justice system." Cuomo noted that George Floyd is the latest name "in a very long list."

"Mr. Floyd's murder was the breaking point of a long list of deaths that were unnecessary and which were abusive. That is a fact. And people are saying enough is enough. That is a fact. What people are saying is we must change and we must stop the abuse. And that is a fact. And New York should be at the forefront of that. That has always been New York's legacy as the progressive capital. We are the ones who hold the standard of what is the right progressive reform," Cuomo said. 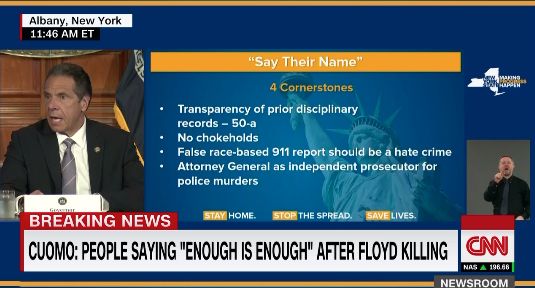