Nationwide protests against police brutality and racial injustice were largely peaceful on Thursday, with many cities lifting their curfews to reflect the calmer demonstrations. It's now just past 11:30 p.m. in Los Angeles, but in many major cities, small crowds remain on the streets.

The Rev. Al Sharpton announced Thursday that he's organizing a March on Washington in late August to mark the 57th anniversary of the historic demonstration for civil rights as protests over the death of George Floyd sweep the nation.

Sharpton said the event will be led by the families of black people who have died at the hands of police officers, including Floyd's family. Sharpton made the announcement while speaking at Floyd's memorial service on Thursday.

"On August 28, the 57th anniversary of the March on Washington, we're going back to Washington," Sharpton said as he delivered a eulogy for Floyd, a black man who was killed last week by a white police officer in Minneapolis, during the memorial service.

"We're going back this August 28 to restore and recommit that dream (of Dr. Martin Luther King Jr.) ... We need to go back to Washington and stand up, black, white, Latino, Arab, in the shadows of Lincoln and tell them this is the time to stop this," Sharpton said.

Sharpton said the march is going to be led by the families that "know the pain" and know what it's like to be "neglected," including the families of Floyd and Eric Garner, a black man who was choked to death in 2014 by a police officer in New York. 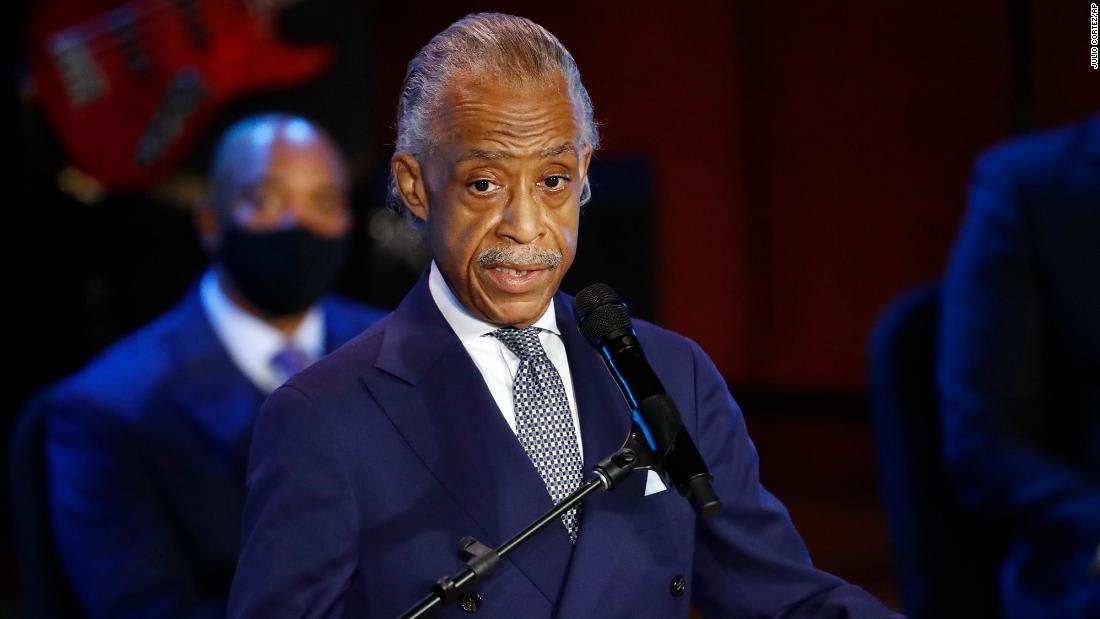 Lee Merritt, the attorney for Ahmaud Arbery's family, told CNN on Thursday that Arbery's killing was "an intentional act by men who were motivated by hate."

Arbery, a black man, was shot and killed while jogging in Brunswick, Georgia, on February 23. In a preliminary hearing today, the investigator testified that Arbery's killer had allegedly used a racial slur.

"You know, I understand how hard that was for (Arbery's mother) to get through, but what we learned from the testimony that went forward, that this was an intentional act by men who were motivated by hate," Merritt said.

"We heard the N-word used repeatedly, but every interaction they had with Ahmaud seemed to be based on a fear of his black skin. And we just heard it over and over and over again as they walked through the narrative, and it seemed like the defense was leaning into that as a defense, that Ahmaud was a menacing black man, even as he ran away," Merritt said.

Arbery's mother, Wanda Cooper, told CNN it was "heartbreaking" to hear about the slur.

"I often imagine the last minutes of my son���s life. I didn't imagine it would be that harsh, but to learn that that statement was made in the last seconds of his life -- again, it was very heartbreaking," she said.

Part of America is tiptoeing toward an uncomfortable self-examination about race. But President Donald Trump, bunkered down in his fortress behind high fences now ringing the White House, is spurning a building wave of national reflection.

Sensing a moment of national reckoning, some major corporations, company managers, major sports leagues and white politicians have felt compelled to speak out. Anecdotal signs of a shift can be seen in Amazon bestseller lists dominated by books about racial prejudice. A story about a heart-to-heart about race between an airline executive and a flight attendant from a rival carrier was a feel-good moment in a wrenching week.

There is a notable absentee from this broadening debate: Trump. While he has condemned Floyd's death and promised justice several times, the President, who has a history of flinging racist rhetoric, is not examining his own prejudices.

Instead, Trump has amplified accusations that former President Barack Obama inflamed racial angst, boasted that he's done more for African Americans than any President but Abraham Lincoln, had federal forces charge peaceful protesters so he could have a divisive photo-op and threatened to send troops into the states.

Trump defended heavy handed action by federal security forces in Washington, DC, on Thursday, doubling down on the tough guy persona that he hopes will reverse his current polling deficit to Democrat Joe Biden in the presidential election race.

And then, later on Thursday, Trump shared a letter on Twitter that referred to the peaceful protesters who were forcibly dispersed from a park near the White House as "terrorists."

In Buffalo, New York, two police officers have been suspended without pay after knocking down a 75-year-old man during the protests, Buffalo Mayor Byron Brown said in a statement on Thursday night.

Brown said he was "deeply disturbed" by video of the incident, and that the police commissioner has directed an immediate investigation into the matter.

“Tonight, after a physical altercation between two separate groups of protesters participating in an illegal demonstration beyond the curfew, two Buffalo Police officers knocked down a 75-year-old man. The victim is in stable but serious condition at ECMC," Brown said in the statement.

"After days of peaceful protests and several meetings between myself, police leadership and members of the community, tonight’s event is disheartening," he said. "My thoughts are with the victim tonight.”

The video shows the man falling backward after being pushed and lying still with what appears to be blood on the ground below his head.

New York Gov. Andrew Cuomo also condemned the incident, saying he had spoken with Brown about it.

"This incident is wholly unjustified and utterly disgraceful. I've spoken with Buffalo Mayor Byron Brown and we agree that the officers involved should be immediately suspended pending a formal investigation. Police Officers must enforce — NOT ABUSE — the law," Cuomo tweeted.

As night falls in Los Angeles, protests are still continuing in full force.

There is no curfew in the city today, and demonstrations have stayed peaceful all day, without violent confrontations or clashes, according to CNN Correspondent Kyung Lah at the scene.

One group of protesters is now marching through a tunnel in downtown LA, Lah said.

Protesters chant slogans as they march, with music and drum beats blaring in the background. Cars are slowly moving through the tunnel along with marchers, with many drivers and passengers holding protest signs or raised fists out of their windows to show support.

"It is loud, it is raucous, but also very peaceful," said Lah. "The police tactic today has been to allow them to march."

"Last night we, saw some people arrested, but overall, most of the thousands who filled the streets of Los Angeles yesterday, did go home. There are fewer people on the streets today, but still ... (there are) sizable crowds," she said.

Protesters are still demonstrating in Washington, DC, even after a heavy downpour that swept through the downtown earlier today.

There is no curfew in the city tonight, reflecting the more peaceful nature of the protests these past few nights, according to CNN Correspondent Alex Marquardt on the scene.

"There were no arrests last night, and the metropolitan police department said they were not going to enforce that curfew as long as people stayed peaceful," Marquardt said.

Many of the protesters are now standing on the other side of a fence that had been put up earlier in the week following violent confrontations with law enforcement. On the other side of the fence, bright floodlights are being directed at the crowd.

"They have been lowered to eye height, so they're pointing right into the faces of the protesters so you can't see the forces behind the lights," Marquardt said. "Those forces have become a huge point of contention."

Some context: A huge influx of federal law enforcement has entered DC this week -- members of the National Guard, FBI, ICE, TSA, and more -- eliciting criticism from DC officials.

Police in New York have begun arresting protesters in Manhattan's Midtown district, as crowds remain out on the streets in violation of the citywide 8 p.m. curfew.

After a day of mostly peaceful protests, the last remaining group of Manhattan demonstrators spent the past few hours marching north, starting from the lower end of Midtown up toward Central Park.

Then, as night fell and the protesters reached 57th Street, "officers just started moving in and making arrests," said CNN Correspondent Shimon Prokupecz, reporting from the scene. "One of the officers was swinging his baton, and the captain actually pulled him back after seeing this officer doing this."

Officers then began making arrests without any warning or announcement beforehand, Prokupecz said, estimating the police numbered in the hundreds.

"They came east, they came west, and they just swarmed this area. It was clear that they wanted to move in and take these demonstrators off the street," Prokupecz said.

On the other side of the East River, protesters also faced off with police in Brooklyn -- but here, they managed to defuse some of the tension in a moment of shared unity.

Tensions threatened briefly to boil over when protesters, numbering a little over a hundred, were met with a line of police officers. Then, one of the police chiefs reached out to speak with the protesters, shook some of their hands, and deescalated the situation, said CNN Correspondent Jason Carroll.

"It's the first time since we've been out here where we've seen police engage some of these protesters in this way," Carroll said. "It's an incredible thing you see there, Chief (Jeffrey) Maddrey still talking and engaging with these young men and women ... These officers are trying to engage with the community."

Gen. John Allen, the former commander of American forces in Afghanistan and former special presidential envoy for the Global Coalition to Counter ISIS under the Obama administration, added to his criticism of US President Donald Trump’s handling of the unrest and protests across the country.

"Instead of debating whether to commit federal troops against American citizens, let’s debate how we can pursue real reform," Allen told CNN Thursday night.

Allen said Washington should "partner with governors and with mayors rather than upbraid them, to see how we can take this moment and rather than treat the American people as a potential enemy, treat the American people as a population with guaranteed rights under the Constitution who are in enormous pain right now, pain from the pandemic and pain from the realities of what was ultimately at the heart of the death of George Floyd."

Some context: On Wednesday, Allen joined former Defense Secretary James Mattis and a chorus of other former military leaders in condemning the President.

He penned a blistering op-ed in Foreign Policy writing that change will "have to come from the bottom up. For at the White House, there is no one home.”

Allen told CNN the American people are looking for "leadership at the most senior level and this is a chance for the President to truly unite the country."

"It's a moment, an incredible moment for us in a context of we can take this as an opportunity to look at those factors that have brought hundreds of thousands of Americans into the streets to protest massive social injustice, centuries of racism and discrimination.
"Or we can make this a security problem and ultimately treat those individuals as a security problem themselves as they are seeking to exercise their first amendment rights, of freedom of speech and freedom of assembly," Allen said.