For 38 years, George Floyd’s second grade teacher Waynel Sexton has held on to a report he did about future famous Americans during Black History Month.

He had described his future aspirations of being a Supreme Court judge.

“When I grow up, I want to be a Supreme Court judge. When people say, ‘your honor, he did rob the bank,’ I will say, ‘be seated.’ And if he doesn't, I will beat the hammer on my desk and everybody will be quiet,” Floyd had written.

Sexton said she always kept one of the projects her class did each year and Floyd’s project is one of the several she has.

“How could we have known that the little eight-year-old who drew this precious delightful picture about justice and wanting to be a Justice, 38 years later, his life would be taken. Sadly, I'm sure this isn't the way he envisioned being famous or bringing justice,” she said.

Sexton added that she remembers him as a quiet student, who enjoyed dancing and singing as part of classroom activities.

Shea told CNN’s Jim Sciutto in an interview that New York City does not need active-duty military to control protests, as Trump has threatened to do.

“This is not about Minneapolis. This is a long-simmering problem that has been permeating society and really has been brought to the forefront, in my opinion, with this flashpoint. It’s certainly about policing and racism and law enforcement. But … it’s about divisiveness and how much I think that that is hurting us now,” Shea said.

Shea said there have been "multiple incidents" in the city during the past week where police officers have been attacked.

“I impress upon everyone, there are problems. But they are not going to get better or be solved by continued violence,” he said.

While there have been videos widely shared of NYPD officers using excessive force on protesters, Shea said the city has changed its way of policing overall.

“Me saying there's been changes isn't good enough, and people aren't believing it, people aren't seeing it fast enough, and I recognize that,” Shea said.
“...The saddest part of all this is that we have done so much good that has been now knocked backwards, in terms of building relationships with community members,” he added.

Shea said the responsibility falls on him to listen to residents about their concerns and how officers respond.

Shea said he will back up his officers when acting appropriately but also call them out when not.

While the city is still seeing huge protest crowds, they have been largely peaceful and Shea said the department is “in a much better place,” even though there is still looting and arrests.

“Somewhere in the middle is where we're landing here. We have been very fluid the last couple of nights, there have still been arrests unfortunately made, but all and all, it is better,” Shea said.

Senate Democrats held a moment of silence for 8 minutes and 46 seconds Thursday morning at the US Capitol to honor the deaths of George Floyd, Ahmaud Arbery and Breonna Taylor.

Senate Chaplain Barry Black opened the event saying we “stand in solidarity with courageous Americans who are peacefully protesting against racial injustice across our nation.”

Sen. Cory Booker gave a short tribute to Floyd, and said that “we gather here in solemn reverence here to not just mark his tragic death but give honor to his life.”

At the end of the 8:46 minutes — the amount of time an officer had his knee on Floyd's neck — Booker, a New Jersey Democrat, read the three names, and said “may we honor those dead while protecting all who are alive.”

Police in Sacramento, California, are investigating officers’ use of a neck restraint tactic on a teenager Monday, which was captured on amateur video.

“The video captures the end of an incident where officers were attempting to effect an arrest for looting,” said officer Karl Chan in a statement to CNN.

Police say Tyzhon Johnson, 18, was actively looting a business and ran when they attempted to detain him.

“Johnson was arrested on looting charges and resisting arrest. He was booked into the Sacramento County Main Jail. The use of force has been documented and will be reviewed per department policy as with any use of force,” according to police.

Johnson was released on Tuesday, according to Sacramento county jail records.

CNN is pursuing the amateur video and comment from Johnson.

Despite consecutive days of peaceful protests, construction of additional fencing along the White House complex began before dawn Thursday – perhaps illustrating security concerns ahead of the weekend.

By 8 a.m. ET, the fencing extended well past the EEOB toward Constitution Ave.

This is in addition to the fencing that went up at 17th and Pennsylvania Avenue and along H Street earlier this week.

At the 17th and Pennsylvania intersection, workers were seen installing reinforcing concrete barriers behind that fencing.

The new issue of Time magazine is a special report on the protests surrounding the death of George Floyd.

The cover image features a painting by artist Titus Kaphar, who also created a painting for Time in 2014 marking the protests in Ferguson.

According to a statement by the magazine, for the first time, the red border of Time’s front page includes the names of people: 35 black men and women whose deaths, in many cases by police, were the result of systemic racism and helped fuel the rise of the Black Lives Matter movement.

New Orleans Saints quarterback Drew Brees issued an apology Thursday for his "insensitive" comments made yesterday in an interview with Yahoo Finance.

"I would like to apologize to my friends, teammates, the City of New Orleans, the black community, NFL community and anyone I hurt with my comments yesterday. In speaking with some of you, it breaks my heart to know the pain I have caused," Brees said.

Brees was met with backlash after saying he will "never agree with anybody disrespecting the flag," a reference to players taking a knee in protest during NFL games.

"In an attempt to talk about respect, unity, and solidarity centered around the American flag and the national anthem, I made comments that were insensitive and completely missed the mark on the issues we are facing right now as a country. They lacked awareness and any type of compassion or empathy. Instead, those words have become divisive and hurtful and have misled people into believing that somehow I am an enemy. This could not be further from the truth, and is not an accurate reflection of my heart or my character," Brees continued.

He concluded the apology by saying, "I have ALWAYS been an ally, never an enemy. I am sick about the way my comments were perceived yesterday, but I take full responsibility and accountability. I recognize that I should do less talking and more listening...and when the black community is talking about their pain, we all need to listen.For that, I am very sorry and I ask your forgiveness."

Some of Brees' teammates and other professional athletes quickly criticized his remarks. Black players make up about 70% of the NFL.

Stephen Jackson, former NBA player and friend of George Floyd, said that Floyd’s death could be a catalyst for justice across the world.

“They said that this conviction would not fix all the Freddie Grays, the Philando Castiles, the Trayvon Martins; it might not fix those, but for black people, it may … This can be a big step in fixing things and getting justice for black people,” he said in an interview with CNN’s John Berman.

“It was emotional. I just want to lift her spirits. I want her next days to be her best days. That's all I care about,” Jackson said. “…I am my brother's keeper, so I'm going to do that.”

Jackson discussed how exactly Floyd has “changed the world.”

“We’ve never seen 50 states protest at one time. Look around the world. In Iran — every place you can name — Somalia, France, the Netherlands, I've been getting pictures from everywhere in support of justice for my brother George Floyd,” he said.

Jackson said that Floyd would be smiling if he saw what was happening across the country and the world right now.

“I just see the smile on his face. … This is a guy that showed love for everybody, he tried his best to be a protector and provider for everybody,” Jackson said. “The love that everybody [is] showing him is the way he showed love to everybody else.”

Jackson also said he strongly disagrees with New Orleans Saints quarterback Drew Brees’ comments on players kneeling during the national anthem. Brees said he will “never agree with anybody disrespecting the flag.”

Jackson said Brees is missing the point of players’ actions.

“As intelligent as Drew Brees is, how is he still that naive?” Jackson said.

“If you're not with us, if you're not standing on the side of right, then obviously you are the problem, or you are part of the problem. … There’s no more straddling the fence. Either you're with us or you're against us. And obviously, by his comment, he's not with us. But I love the fact that his teammates stood up and spoke, because they know him best, but we can’t…tolerate that no more. You’re either with us or against us,” he added.

Beyoncé Knowles-Carter is encouraging her fans to remain "focused" in the fight for justice for George Floyd.

The Grammy-winning artist shared a poignant message on Instagram Wednesday, which featured an aerial photo of thousands of Black Lives Matter demonstrators filling the streets of Minneapolis, Minnesota.

Accompanying the picture were the words: "The world came together for George Floyd. We know there is a long road ahead. Let's remain aligned and focused in our call for real justice." 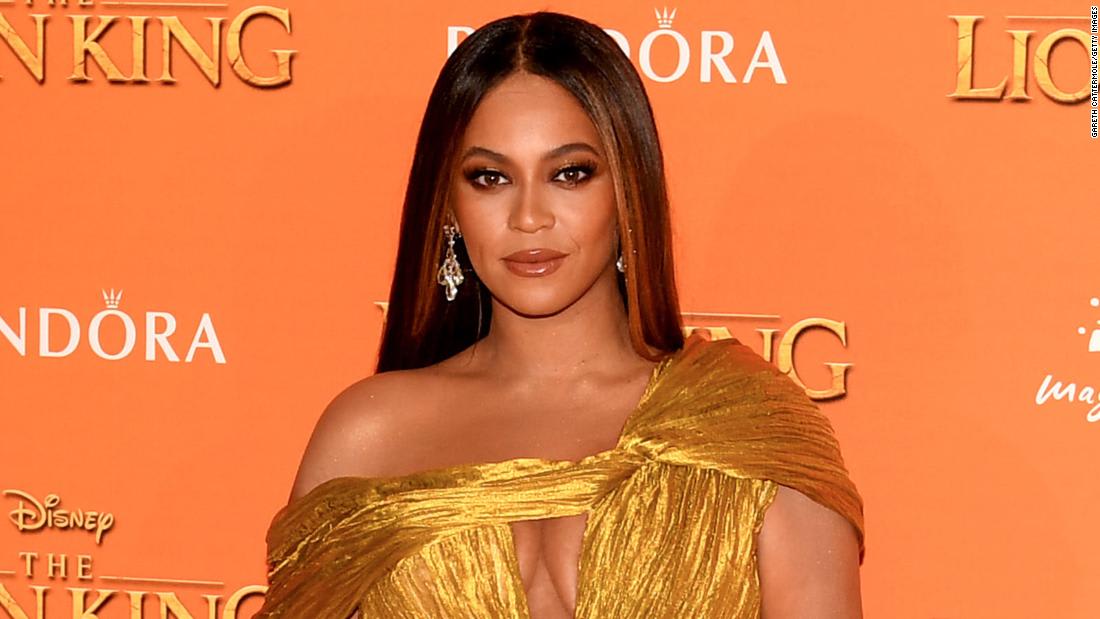