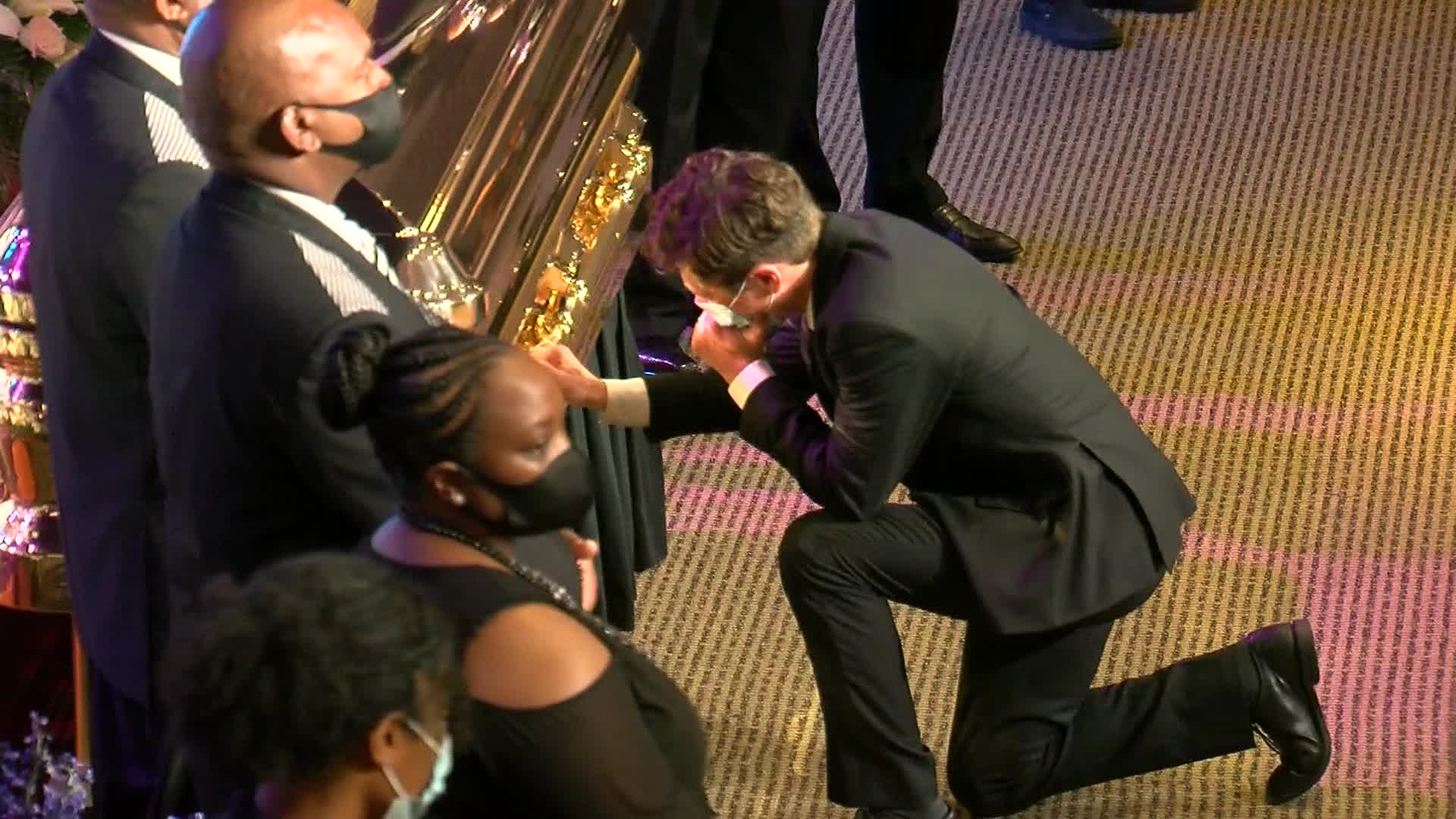 As guests gather for the memorial service for George Floyd, Minneapolis Mayor Jacob Frey was seen paying his respects at Floyd's casket.

The mayor kneeled, and then broke down and cried beside the casket.

The service is set to begin any moment now. Rev. Al Sharpton, the founder of the National Action Network, will deliver a eulogy to honor Floyd's life.

House Speaker Nancy Pelosi sent a letter to President Trump on Thursday expressing concern over the increased presence of federal law enforcement in the nation's capital.

In the letter, she demands clarity and answers from the administration on the situation and why members of the National Guard from other states are operating in Washington, DC.

“We are concerned about the increased militarization and lack of clarity that may increase chaos. I am writing to request a full list of the agencies involved and clarifications of the roles and responsibilities of the troops and federal law enforcement resources operating in the city," Pelosi writes. "Congress and the American people need to know who is in charge, what is the chain of command, what is the mission, and by what authority is the National Guard from other states operating in the capital.”

At a news conference Thursday afternoon, DC Mayor Muriel Bowser thanked Pelosi for reaching out to the city earlier this morning about the situation.

“We want the military; we want troops from out of state out of Washington DC,” Bowser said when asked if she would like the military police to reduce their presence in the district.

Pelosi signed the letter earlier while on a Zoom webinar hosted by the Jewish Democratic Council of America. She paused her remarks to read portions of the letter out loud.

Attorney General William Barr defended the tactics deployed by law enforcement earlier this week as they dealt with protesters who gathered in Washington because of the death of George Floyd.

The attorney general, flanked by other federal leaders, spoke publicly for the first time since Monday’s demonstration, when Barr ordered authorities to clear a crowd of protesters that had gathered near the White House moments before President Trump's televised address from the Rose Garden.

On Thursday, Barr said there was “very serious” rioting, a break in and fires set at historic churches and buildings over the weekend.

“The rioters used crowbars to dig out the pavers” and then used them as projectiles to throw at law enforcement, he said.

Barr said there were at least 114 injuries to law enforcement — "most of those to federal agents and most of those inflicted around the White House.” He said that it is “the responsibility of the federal government” to protect that property and keep everyone safe.

Some background: On Monday, Barr and other top officials from agencies responsible for securing the White House had previously planned to secure a wider perimeter around Lafayette Square. During Thursday’s news conference, Barr said it was a coincidence that law enforcement cleared the area later used for the President's walk to the nearby St. John's Episcopal Church, where he posed for a photo.

There have been 624 arrests by the Multi-Agency Command Center (MACC) in Minnesota since May 31, according to a tweet Thursday from the Minnesota Department of Public Safety (MDPS).

MDPS established the MACC, a coordinated effort between Minnesota law enforcement and the National Guard, on May 31 to "coordinate public safety response to protests following the death of George Floyd," according to a tweet from May 31.

The private memorial begins at 2 p.m. ET at the sanctuary on the downtown Minneapolis campus of North Central University.

Jackson walked up to the casket, still closed, raised his hands over the coffin, and was then escorted to his seat.

Several notable community members and celebrities are expected to be in attendance at the memorial service.

Ohio Gov. Mike DeWine is asking all Ohioans to observe an eight-minute moment of silence at 2 p.m. ET to honor the life of George Floyd, according to a statement from his office.

The moment of silence is meant to correspond with the Minneapolis memorial service to honor Floyd that starts at that time, the statement said.

Asked if she wanted military presence reduced in the nation's capital, Mayor Muriel Bowser said in a news conference today that “we want the military; we want troops from out of state out of Washington, DC.”

Bowser said she was “very concerned” about how the federal law enforcement expanded from the federal complex Monday evening.

Bowser said that at no time would she support President Trump taking over authority of the Metropolitan Police Department (MPD).

After visiting protests Wednesday and seeing the expanded perimeter that federal law enforcement officials had created, Bowser requested that DC Police Chief Peter Newsham talk to the federal leaders to get the perimeter line pushed back, as DC streets are under the jurisdiction of the MPD.

Newsham said he has had “multiple conversations with federal leadership” to push federal law enforcement back to the federal complex, and he said that federal forces agreed. They also agreed to move back Thursday morning when asked.

The chief clarified that on the DC streets, MPD is in charge, and around federal properties, federal resources are in charge.

Asked about the confusion of some law enforcement officials not wearing badges to identify what division they are with, Newsham said that all MPD are required to identify themselves and that the DC National Guard uniform has the DC flag on it.

Bowser said that Maryland is part of a "compact agreement," and could request help that Maryland send troops. As of now, the mayor said she has not requested troops from any state.

Washington, DC, will not impose a curfew Thursday night, after protests were peaceful and no arrests were made Wednesday night.

Metropolitan Police Chief Peter Newsham said he expects a large protest — bigger than any protest in recent times — this Saturday.

Attorney General William Barr said the US is currently facing "two serious challenges to the rule of law" — the brutality that led to George Floyd's death and those who have "hijacked protests to engage in lawlessness."

Barr, just about an hour ahead of today's memorial service for Floyd, said, "today is a day of mourning. He said justice must be served.

However, Barr also denounced violence stemming from some protests.

"While many have peacefully expressed their anger and grief, others have hijacked protests to engage in lawlessness," he said. "Such senseless acts of anarchy are not exercises of First Amendment rights."

Some background: It was Barr who on Monday evening ordered authorities — clad in military-grade guard and head shields — to clear a crowd of peaceful protesters that had gathered near the White House, according to a Justice Department official.

Soon after, President Trump addressed the press from the White House Rose Garden, threatening governors and local officials to quell the protests in their states or he would move to involve US military — something he doesn't have the absolute legal authority to do. He subsequently walked past the area where protesters had just been cleared to take a photo with a Bible at a church damaged by demonstrators.