Less than 24 hours after law enforcement officials violently dispersed peaceful protesters outside the White House with pepper balls and rubber bullets, Secretary of State Mike Pompeo met with survivors of China's brutal 1989 crackdown on the pro-democracy protesters in Tiananmen Square.

Although the protests raging in Washington and across the US did not come up in the meeting, one of those survivors, Henry Li, told CNN that they are worried.

"The US is the leader of the world. It is very tough for Americans right now," he said on Tuesday, a day after President Donald Trump called on state governors to pursue "total domination" amid violent crackdowns on protesters and journalists in cities across America.

Current and former diplomats tell CNN the events at home are "scary" and "heartbreaking" to watch -- and also undermine their mission.

Former US Ambassador to Bulgaria Nancy McEldowney noted that "under any other circumstances, it would of course be wonderful for the American Secretary of State to meet with the survivors of the Tiananmen Square Massacre, because that's what the United States stands for." 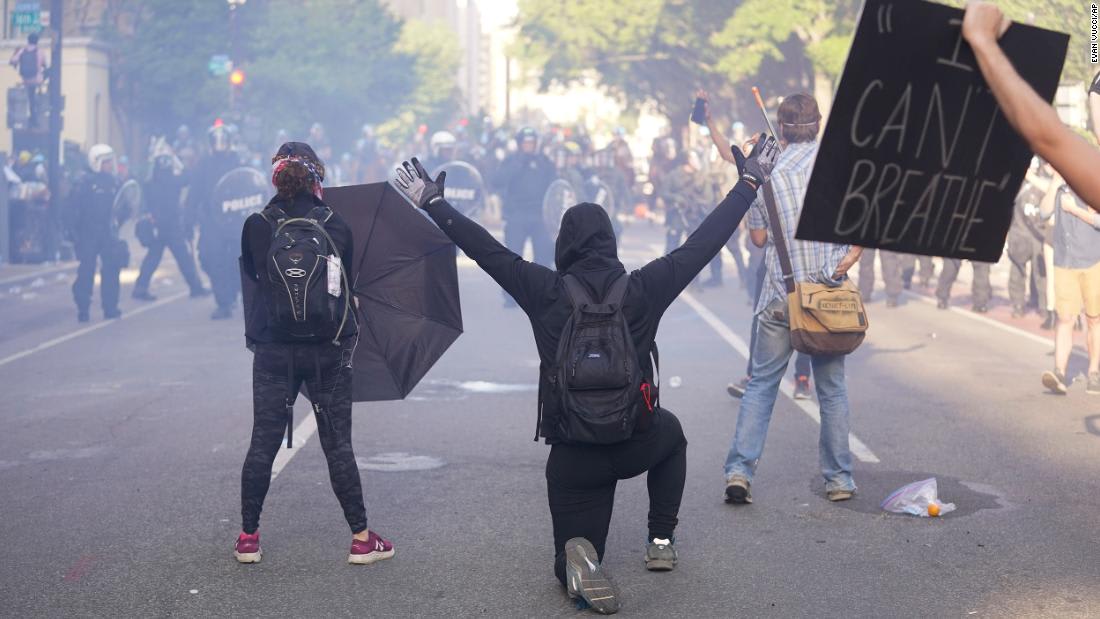 Thabo Sefolosha knows far too well about police brutality against black people -- in 2015, it happened to him, when he suffered injuries by New York City police and was wrongly arrested.

Sefolosha, 36, is a 14-year NBA veteran from Switzerland. Earlier today, he told CNN that he could see himself in George Floyd, who was killed while in police custody in Minneapolis.

"I think every black man in America, in my opinion, from the 14 years I've lived here, can feel that way," Sefolosha said. "It's that ultimate bullying. ... I think it's just an abuse of power that you've seen in preschool, middle school bullying, and it's at such a high level that the people have to be fed up and something has to be done about it."

He said when he saw the video of George Floyd's death, he felt "a sense of just being totally disconnected.

"How can a human being do that to somebody else and just sit on his neck for nine minutes? Intentionally in broad daylight killing someone like this. And the anger is extended to the other officers that are just around just watching. Like, what is your purpose in life? Why did you decide to become a police officer? Everything is to be put in question at this point. So I can't really blame people that are in the street just angry," he said.

Read more about his story here: 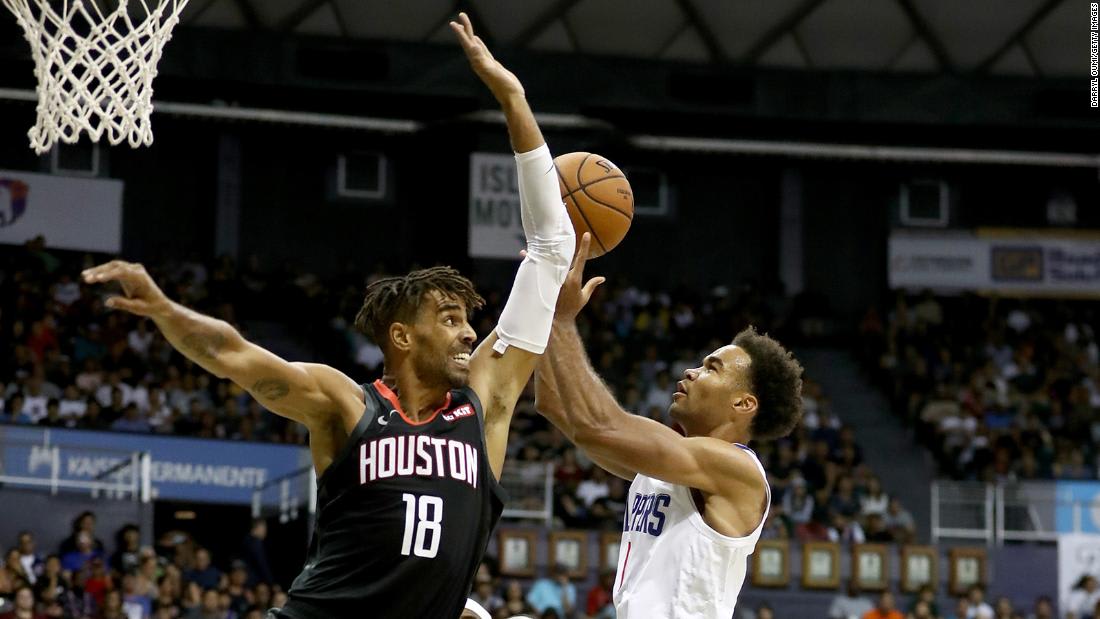 Thabo Sefolosha, a victim of police brutality himself, opens up about George Floyd's death

Police in New Orleans fired tear gas Wednesday night to disperse protesters who police say refused to comply with orders to not walk across the Crescent City Connection, a bridge that stretches across the Mississippi River.

“Escalation and confrontation hurts us all. NOPD is committed to respectful protection of our residents’ First Amendment rights. However, tonight we were compelled to deploy gas on the CCC in response to escalating, physical confrontation with our officers," tweeted the New Orleans Police Department.

While addressing plans to reform the Los Angeles police department earlier today, Mayor Eric Garcetti said he will not be increasing the police budget.

He explained that “this is bigger than just a budget,” and “it is time to move our rhetoric towards action to end racism in our society.”

He announced that the city had identified $250 million in cuts to be invested in jobs, health, education, and healing, focusing on the city’s black community as well as “communities of color, women, and people who have been left behind for too long.”

Decker said the Commission would also:

Mayor Garcetti also addressed the importance of having a civilian oversight team for the police department.

A team of five unpaid volunteers appointed by the mayor will look at policies that guide the police department, oversee its operations, and review all officer-involved shootings, said Garcetti.

The commission and the police chief will have a public meeting every week where residents are given the opportunity to speak directly to the entire leadership of the department, said the mayor.

Three men who allegedly sought to exploit protests and incite violence in Las Vegas have been charged, according to the US Attorney’s Office for the District of Nevada.

In a federal complaint filed on Tuesday, each man was charged with one count of conspiracy to damage and destroy by fire and explosive, and one count of possession of unregistered firearms. They are currently in state custody.

All three were Las Vegas residents and alleged members of the “Boogaloo” movement, “a term used by extremists to signify a coming civil war and/or collapse of society,” according to a press release by the Attorney's Office today.

According to the complaint, authorities seized numerous accelerants, including gasoline, fuel injector cleaner, hair spray, strips of clothes, and four glass jars filled with a liquid that tested positive as gasoline, from one of the men's vehicles.

They also found multiple rags, cans of hairspray, a plastic bag full of fireworks, a 12-gauge shotgun with numerous shotgun shells and a 45 ACP pistol in his vehicle.

“Violent instigators have hijacked peaceful protests and demonstrations across the country, including Nevada, exploiting the real and legitimate outrage over Mr. Floyd’s death for their own radical agendas,” said US Attorney Nicholas A. Trutanich in the press release.

Ongoing investigations nationwide: Federal law enforcement officials have told CNN that investigators believe extremists from both left and right have been involved. Investigations are still ongoing and prosecutors often add information to the charging documents.

So far federal prosecutors have charged at least a dozen people with crimes related to the disturbances in the cities of Nashville, Chicago, Newark, Dallas, Minneapolis, Buffalo, and Brooklyn.

The Seattle mayor has announced an immediate end to the city's curfew, walking back her decision just yesterday to extend the curfew through the end of the week.

Mayor Jenny Durkan said on Twitter that the major change in policy was in response to a request from community leaders at a meeting she attended today with Police Chief Carmen Best.

“Chief Best believes we can balance public safety and ensure peaceful protests can continue without a curfew,” Mayor Durkan tweeted.

“For those peacefully demonstrating tonight, please know you can continue to demonstrate. We want you to continue making your voice heard.”

Reversing the extension: She had announced just yesterday that the curfew would be in effect every night all this week -- but the Seattle Police Department reported that it arrested only two people during protests on Tuesday.

All three former Minneapolis police officers who were arrested Wednesday on charges of aiding and abetting the murder of George Floyd will have their first court appearances on Thursday afternoon.

The three officers -- J. Alexander Keung, Thomas Lane and Tou Thao -- are set to appear before the judicial officer at 1:45 p.m. ET.

The hearings were pushed up by 45 minutes from their original schedule, according to court records.

No official reason was given, but the original start times would have had the former officers appearing in court at the same time as a televised memorial for George Floyd in Minneapolis, to be attended by his family.

In Minneapolis, the city where George Floyd died, protests have become largely peaceful and calm after the initial violence over the weekend.

Mourners and protesters have set up a memorial for Floyd at the site of his death, with a wall mural and bouquets of flowers and tributes on the ground below.

"Today and the past two days, (protests) have been nothing more than peaceful, quite beautiful," said CNN Correspondent Sara Sidner, reporting from the scene.

"There has been an incredible caring sentiment here. There was a piano that was rolled in. Different people, including children, were playing songs on the piano. There was free food for anyone who needed it or wanted it. There were grab bags with diapers and Similac and canned food and vegetables. This was a place of healing for the last couple of days."

Though some shops in the neighborhood have boarded up their windows, they have largely been left alone by the crowds, Sidner said.

"There's a reason for that -- this is considered a sacred place, and time and again people have come out here and treated it as a sacred place because it is the place where George Floyd was killed and people want to recognize that," Sidner said.