Protestors in New York City last night appeared to be briefly boxed in on the Manhattan Bridge, with police waiting on either end — but officers eventually allowed them to walk off and leave the area.

Several posts on social media indicated the protestors had been “trapped,” including a post from Alexandria Ocasio Cortez that it was “dangerous” and the she was heading to the scene.

The protesters on the bridge had splintered off from a larger group that had been demonstrating in Brooklyn earlier in the day, according to CNN correspondent Jason Carroll, who reported from the scene. The splinter group tried to make their way to Manhattan when they were stopped on the bridge.

Carroll reported that police officers around the bridge were seen waiting on both ends, some with white zip ties used to detain protesters.

Later, Carroll reported that police allowed the boxed-in protesters walk away and leave the area. The demonstrators were seen slowly walk off, back to the Brooklyn side, as police stood to the side.

"We haven't seen them make arrests or taking folks into custody, allowing those on the bridge to make their way off the bridge," Carroll said.

What the Mayor's office says: Later, the Communications Director for Mayor Bill de Blasio tweeted that only the Manhattan side of the bridge was ever closed.

“Clarification on what unfolded here. Police presence on both sides of the bridge, but only the Manhattan side was ever blocked off,” Wiley Norvell tweeted. “After attempting to cross into Manhattan but halted by police on that side, the group ultimately dispersed back over to Brooklyn where they are now.”

The nation’s top business lobbying group, citing an unemployment rate that is twice as high for black Americans as it is for whites, says it will redouble efforts to address racial inequality.

The US Chamber of Commerce promised to address “inequality of opportunity through education, employment, entrepreneurship, and criminal justice reform.”

“The senseless death of George Floyd has called renewed attention to the inequality and injustice in America," the statement said. “As a nation, we must address this issue with a robust plan of action.”

The group named a national steering committee for the initiative that includes black business leaders.

The lobbying group promised to build on to two programs—one to help companies build diverse pipelines of talent and another is the chamber’s partnership with historically black colleges.

The chamber will hold a town hall on June 25 to address racial inequality and how corporate American can help fix it.

The groups says it represents the interests of more than 3 million businesses of "all sizes, sectors, and regions, as well as state and local chambers and industry associations."

Two college students said they were traumatized after police used tasers and dragged them from a vehicle at a protest on Saturday night.

The six Atlanta police officers are being charged with using excessive force, according to officials.

The officers were filmed in downtown Atlanta breaking windows of a vehicle, yanking a woman out of the car and tasing a man. The two victims were later identified as college students at Spelman and Morehouse, both historically black schools, and were returning from protests calling for an end to police violence against black citizens.

Taniyah Pilgrim, the Spelman College student, said she thought she might be killed in that moment. “I was thinking, OK, this is the end,” she said.

Morehouse College student Messiah Young told CNN’s Alisyn Camerota that he has not yet watched the video of the incident. “I’m not trying to relive that moment at this point. It's a little too much right now, and I’d rather, you know, just recover, honestly,” he said.

“It’s probably one of the hardest moments that I've had to face in my life. I just can't even fathom what happened. At this point, I'm just so far gone, it's like I'm trying to remove myself from that situation, but it’s really hard to cope with,” Young said, growing emotional.

Young’s wrist was broken, he got 20 stitches in his forearm and he said he felt lingering effects of being tasered.

Pilgrim said the effects on her are “traumatizing.”

“I haven't even processed the situation and everything that happened. … I don't want this to continue to happen and have more victims who are traumatized that can't sleep, can't eat. I don't want that for anyone else. This is disgusting. This isn't right,” Pilgrim said.

“Once they approached the car, they literally swarmed the car. I just was shellshocked. I've seen the situation so many times, you know. We have George Floyd, we have so many people dying and it's just senseless. Breonna Taylor, Ahmaud Arbery, all these people are dying every day, and people are out protesting for this reason. It's still happening at these protests. We see this literally daily. And it's just not OK,” Young added.

“As we've seen in the past, [there was an] attempt to assassinate the character of these young people to say there was a gun. There was never a gun,” said Young’s attorney Mawuli Davis. “… The culture in policing in America and in Atlanta must change and it must change immediately, or innocent people risk literally losing their lives.”

“Change is really all that needs to come from this. There needs to be a total reset in policing,” he said. “…There needs to be a sense of trust and safeness and security dealing with law enforcement. We just need to see a total shift in the way things are done because at this point we're going to continue having these protests. We're going to continue losing black lives, brown lives.”

Protests continued last night across the United States following the death of George Floyd at the hands of a now-jailed former Minneapolis police officer.

Here's what it was like at the protests last night:

Joe Biden struggled to win over young voters in the Democratic primary.

Now, as the 77-year-old turns his sights to the general election, many young people -- a number of whom rallied behind some of his more progressive rivals in the primary -- want to see if the presumptive Democratic nominee can give them the inspiration and bold change that they crave.

Ja'mal Green, a 24-year-old activist from Chicago, said young people want "a candidate who is going to change their lives." Green was in Minneapolis over the weekend protesting the death of George Floyd, a black man who was killed in police custody after a white officer kneeled on his neck.

"What it all boils down to is: Can Joe Biden be bold for America? We need him to start being bold," Green told CNN. "What is he going to do to about police shooting people because of the color of their skin?"

Green supported Vermont Sen. Bernie Sanders in the 2016 and 2020 primaries, and pointed to criminal justice reform, "Medicare for All," the climate crisis and the elimination of student debt as key issues for young voters.

If Biden does not move to the left on these issues, Green said he and young people on the left of the political spectrum "won't support either candidate."

Biden has in recent weeks ramped up efforts to engage young voters. 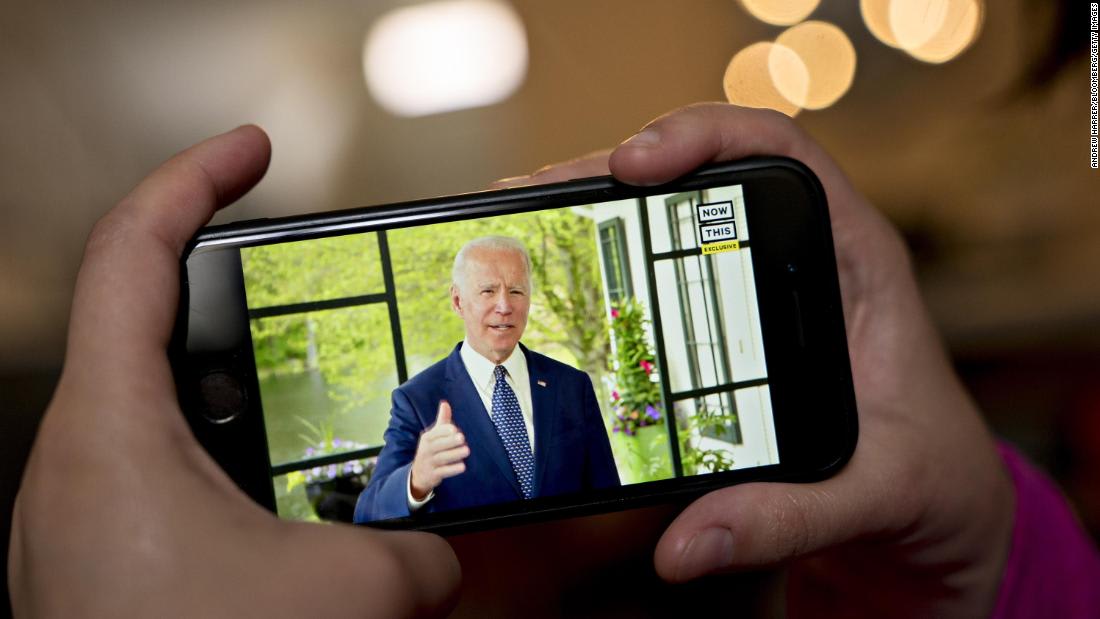 'We need him to start being bold:' Young voters are craving inspiration from Joe Biden

China's Ministry of Foreign Affairs has again voiced its hope that the United States will take "concrete" measures against racial discrimination.

"We hope the US government will take concrete measures to fulfil its obligations under the international convention on the elimination of all forms of racial discrimination to protect the legal rights of minorities," Zhao Lijian, a spokesperson for China's Foreign Ministry, said Wednesday

Traditionally, Beijing has portrayed racism as a Western problem. But China itself has come under heavy criticism in recent weeks for its treatment of Africans in the country.

Last month, many Africans were subject to forced coronavirus testing and arbitrary 14-day self-quarantine in the southern Chinese city of Guangzhou, regardless of their recent travel history, and scores were left homeless after being evicted by landlords and rejected by hotels under the guise of various virus containment measures.

The incident caused a rupture in China-Africa relations, with the foreign ministries of several African nations -- and even the African Union -- demanding answers from China.

Yet China's official response stopped short of admitting that discrimination took place -- or apologizing for it.

China has also faced criticism over its treatment of the predominantly Muslim Uyghur minority in Xinjiang. The United States was among 23 nations to issue a joint statement at the United Nations General Assembly last year raising concerns over alleged human rights abuses in Xinjiang. 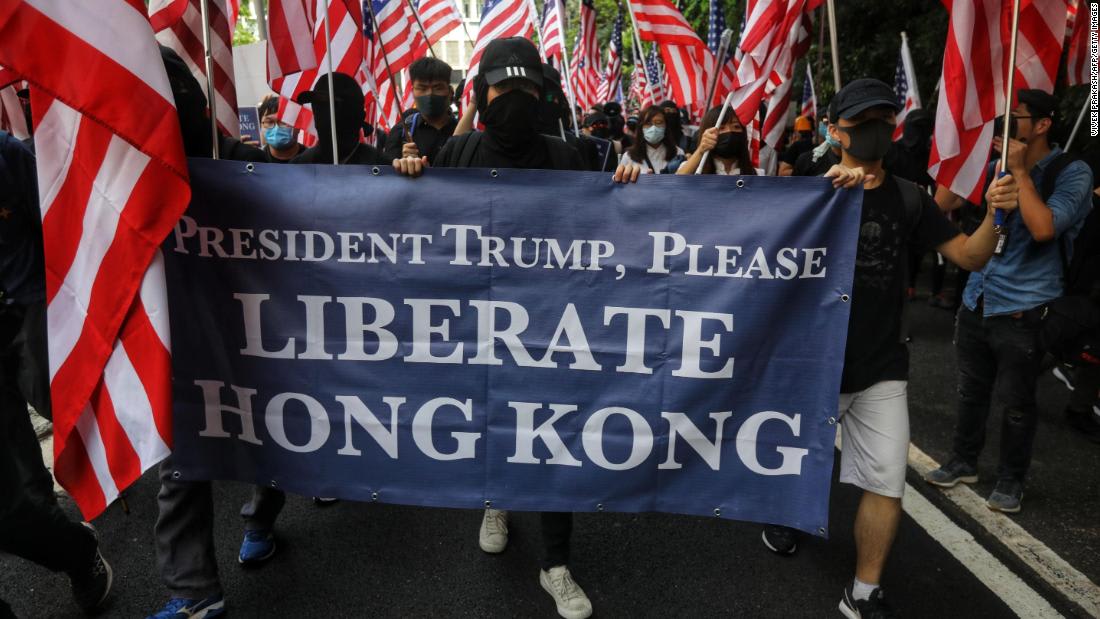 Tuesday was the eighth consecutive day of protests across the United States over the death of George Floyd.

On a national level, it was comparatively calmer than the violent clashes seen over the weekend and Monday. But despite the broadly peaceful nature of the protests, a number of violent confrontations between police and protesters occurred in several major cities.

Here are some of the biggest developments overnight:

Pope Francis spoke out on Wednesday morning in the Vatican about the "tragic" death of George Floyd.

Speaking at his weekly Angelus prayer, the Pope said, “Dear brothers and sisters in the United States, I have witnessed with great concern the disturbing social unrest in your nation in these past days, following the tragic death of Mr. George Floyd."
“My friends, we cannot tolerate or turn a blind eye to racism and exclusion in any form and yet claim to defend the sacredness of every human life. At the same time, we have to recognize that the violence of recent nights is self-destructive and self-defeating. Nothing is gained by violence and so much is lost."

Francis added that he is praying for the “repose of the soul of George Floyd and of all those others who have lost their lives as a result of the sin of racism.”

US Surgeon General Dr. Jerome Adams warned the nation to expect new outbreaks of coronavirus resulting from the George Floyd protests that have seen thousands of people gather in close proximity.

"I remain concerned about the public health consequences both of individual and institutional racism (and) people out protesting in a way that is harmful to themselves and to their communities," Adams told Politico in an interview published Monday.
"Based on the way the disease spreads, there is every reason to expect that we will see new clusters and potentially new outbreaks moving forward," he added.

The US hasn't even contained its current outbreak, let alone prepare for a second wave. The nation is still seeing about 20,000 new cases of Covid-19 every day.

Some states are doing better than others -- but the entire West Coast is still seeing its infection rate tick upward, as well as South Carolina, which was one of the first states to start reopening.