The Minnesota Attorney General's office has finished its initial review of evidence in the investigation of four former police officers involved in the death of George Floyd and has rendered a decision regarding additional charges, two law enforcement officials briefed on the state's investigation tell CNN.

One of the officials said the state's Attorney General will be making a significant announcement in the case early this afternoon. The officials would not reveal what the decision was.

A total of three now-former officers can be seen on video on top of George Floyd before his death on May 25. They include Derek Chauvin — now charged with third-degree murder and manslaughter — as well as officers Thomas Lane and J.A. Keung. A fourth former officer, Tou Thao, is seen on the video near the others.

Benjamin Crump, an attorney for the Floyd family, told CNN Wednesday that he is confident the other officers will be charged before Thursday's public memorial in Minneapolis.

"I am confident that these officers will be charged before people in Minneapolis say their final goodbyes to George Floyd, may he rest in peace."

Protests across New York City last night were "overwhelmingly peaceful," and the new strategies employed by the city's police department to address the protests were effective, Mayor Bill de Blasio said in a news conference this morning.

“We saw peaceful protests during the day – some tense moments, undoubtedly, but overwhelmingly peaceful protests,” he said, adding there were a few incidents of illegal or violent activity around the protests.

“Overwhelmingly, it was a very different reality in New York City last night, and the areas that had been particularly effected in midtown, Manhattan and in part of The Bronx the night before did not see that kind of activity in any meaningful number last night,” de Blasio said.

New strategies employed by the NYPD were created in light "of what happened 9 p.m. Sunday through Monday night," he said, and he thanked NYPD Commissioner Dermot Shea and the officers around the city.

"They’ve been asked to do a lot over the past few days – a lot of them are exhausted from working so hard, but they are going out there, doing their jobs, protecting all of us and showing a lot of restraint in the process ... Anyone who wants to put on that uniform takes an oath, agrees to a higher calling, and agrees that restraint will be part of their life and ‘keeping the peace’ means every sense of those words. That's what our officers and their commanders understand," de Blasio said.

Cities and counties in California have imposed curfews in response to violent protests across the country this weekend.

Here are the latest curfews in the state (All are local times): 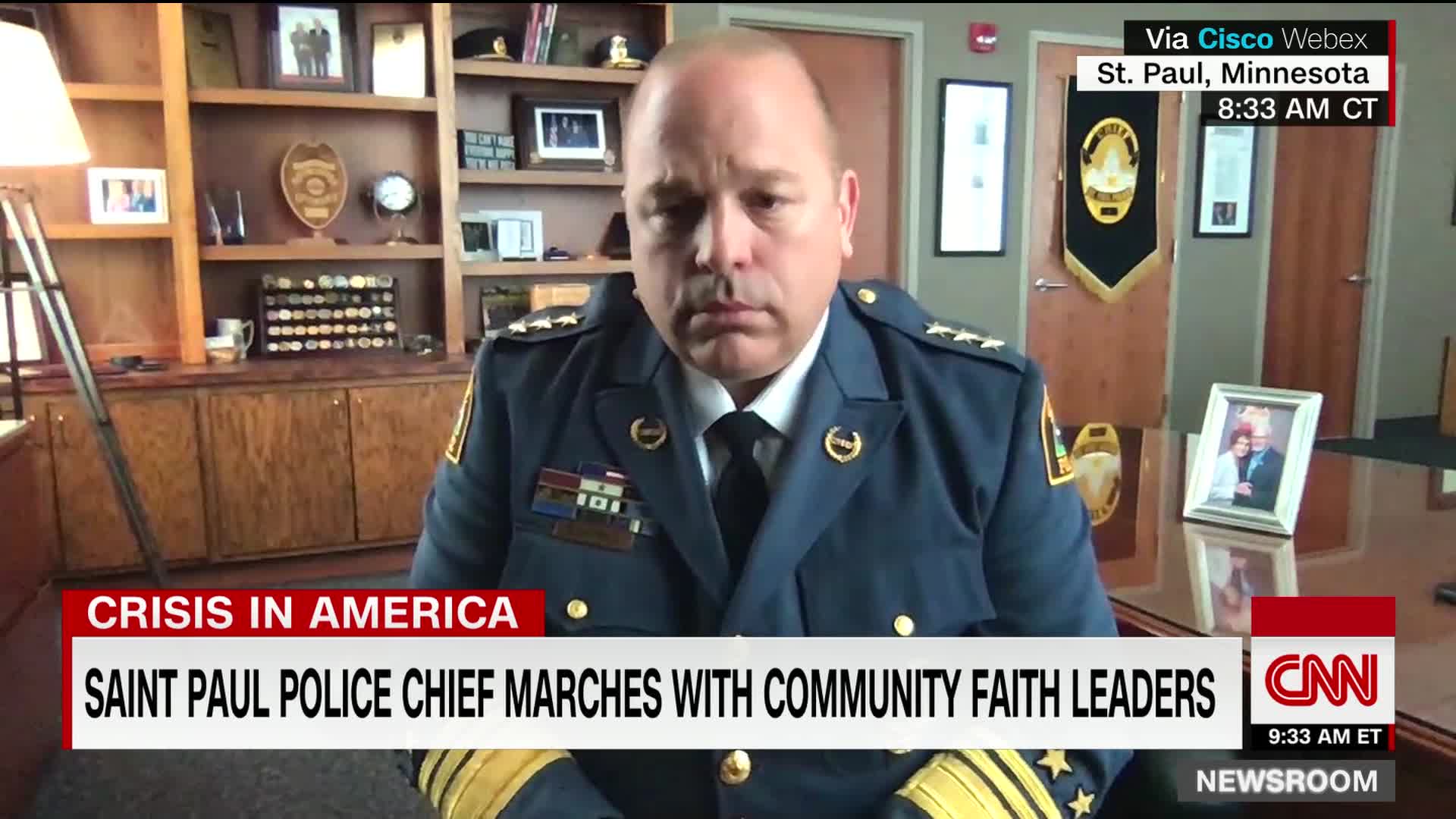 Todd Axtell, the police chief of St. Paul, Minnesota, said that if any officers think that the use of force against George Floyd was reasonable, they should turn in their badges.

“We have been dealing with traumatic and challenging times, but…I want to make sure that all chiefs and sheriffs throughout this country join me in this clearing call to our officers. When they watch that video, if they think in any way, shape or form that that’s acceptable or reasonable uses of force — I told my officers, if they think that's reasonable, I want you to turn your badge in to me and do it immediately,” Axtell told CNN’s Poppy Harlow.

Axtell said that there is systemic racism embedded in most systems in the United States.

“It is not just in police departments across this country. My goodness, there’s systemic racism within pretty much everything in this country,” he said. “…If we turn a blind eye to that, we're never going to move forward together.”

“It was such a touching moment for me personally to be in solidarity with a lot of the pain that's occurring throughout our city and throughout this country. Now is our moment to move forward together, use this tragedy as an opportunity to do what has been needed to be done for many, many years,” Axtell said.

Defense Secretary Mark Esper said Wednesday that he had advance notice of President Donald Trump’s visit to St. John’s Church in Lafayette Park Monday night, but was not aware that the visit would turn into a photo opportunity.

“Well I did know that we were going to the church. I was not aware that a photo-op was happening,” Esper told reporters at the Pentagon.

Esper has drawn criticism from lawmakers and former defense officials over his decision to accompany Trump to the area minutes after law enforcement officers used riot control agents to clear the area of largely peaceful protesters.

Esper said he had not been briefed on plans to clear the park, but added that he would not expect to be briefed on such an operations.

Minnesota Gov. Tim Walz apologized to CNN correspondent Omar Jimenez after police arrested him and his crew on Friday while they were covering protests in Minneapolis.

“Thank you for the professionalism, thank you for understanding and I’m deeply sorry. And you know that we’ve made other mistakes on this as far as making sure that you have access, but protocols and everything else we're learning have to change, because we have to create the space for you to tell the story,” Walz told Jimenez during an interview.

Walz also explained why he felt it was important for him to be out on the streets of Minneapolis. It was the first time that the governor visited the memorial at the site of George Floyd's death.

“I have to personally and viscerally feel this. It’s unfortunate I've become friends with mothers only because their sons were killed,” he said.

“I don't think we get another chance to fix this in the country. I really don't. I don't think that's hyperbole. I think being at the heart of this and seeing the community's pain so viscerally, this is going to have to be that change we look for,” Walz added.

Speaking at a Pentagon media briefing Wednesday, Defense Secretary Mark Esper said he does not support the use of the Insurrection Act, adding that it should only be used as a last resort.

“The option to use active duty forces in a law enforcement role should only be used as a matter of last resort, and only in the most urgent and dire of situations. We are not in one of those situations now. I do not support invoking the Insurrection Act,” Esper said.

Some background: President Trump on Monday threatened to invoke the Insurrection Act of 1807 and take the unusual step of deploying active duty US soldiers to police US streets.

While Trump claims the move would break up anti-fascists, or Antifa, who he says are organizing violent riots that have led to looting, it would also effectively squelch peaceful protests for racial justice after the death last week of a black man, George Floyd, after a police officer used lethal force during a stop.

The law was most notably used in the 1950s to enforce desegregation. And later, in the 1960s, to address riots in Detroit.

Secretary of Defense Mark Esper called the killing of George Floyd a “horrible crime” and said the officers on the scene that day should be "held accountable for his murder."

"Let me say upfront, the killing of George Floyd by a Minneapolis policeman is a horrible crime. The officers on the scene that day should be held accountable for his murder. It is a tragedy that we have seen repeat itself too many times," Esper said while speaking during a media briefing at the Pentagon.

Esper said, “racism is real in America, and we must all do our very best to recognize it, to confront it, and to eradicate it.”

Some context: Derek Chauvin, the officer seen kneeling on Floyd's neck for nearly nine minutes, was charged on Friday with third-degree murder and second-degree manslaughter.

Still, three other officers on scene — Thomas Lane, J.A. Kueng and Tou Thao — have not been charged, despite the family's and protesters' wishes. All four were fired by Chief Medaria Arradondo last week after video of the incident sparked outrage.

President Trump claimed Wednesday that his decision to visit St. John’s Episcopal Church has been widely praised by religious leaders.

The White House is facing ongoing fallout from the events of Monday evening, where peaceful protesters were dispersed with tear gas and rubber bullets before curfew so Trump could participate in a photo opportunity with a Bible outside the church, which suffered a fire during protests over the weekend. The move has been widely criticized by clergy.

Asked his response to criticism from Rev. James Martin, a Jesuit Priest, who called it a “photo opportunity,” Trump said, “My response is simple – most religious leaders loved it.” He cited praise from political allies Franklin Graham and Robert Jeffress and cast blame on his rivals and the protesters.

Trump also claimed he was unaware of the tactics used to clear the park ahead of his visit – even though press widely reported the explosions could be heard from his address in the Rose Garden.

“When I said go to the church, I didn’t know, protesters or not, nobody tells me that. They say, ‘Yes sir, we’ll go to the church,’” he said, claiming law enforcement in the area “didn’t use tear gas,” which is untrue, per his own CDC.

Trump said that “many religious leaders loved it” when he held up the Bible.