A large police presence was visible outside City Hall in New York City as crowds gathered to demand justice over the killing of George Floyd.

The demonstration comes after a night of violence in the city that saw widespread looting. Speaking earlier in the day, New York Gov. Cuomo condemned the violence, calling out the city's police and mayor for not doing their job.

“The police in New York City were not effective at doing their job last night, period, they have to do a better job,” Cuomo said.

The governor acknowledged that most of the city's protests have been peaceful and urged protesters to maintain peace and take the necessary precautions amid the coronavirus pandemic. 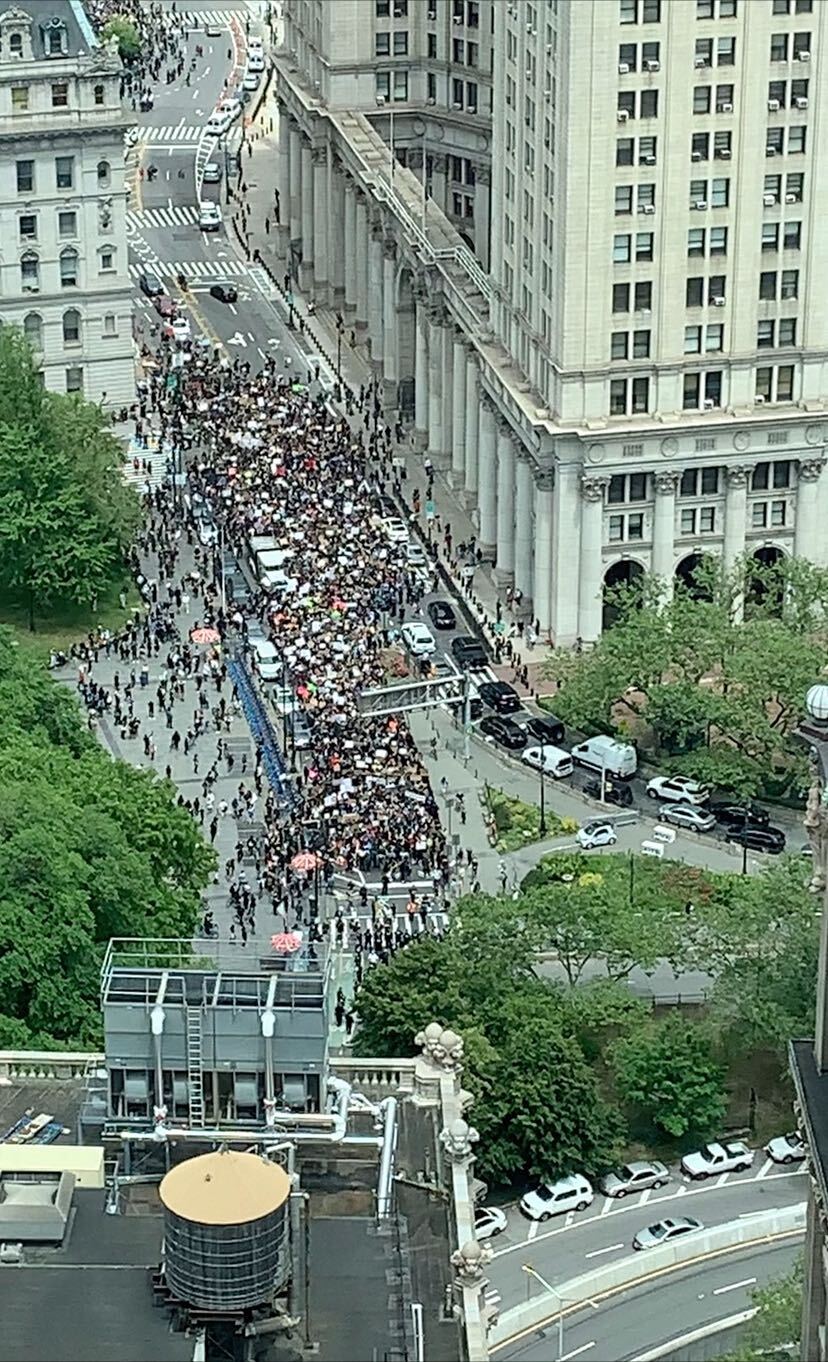 The owner of Cup Foods, the store whose employee called the police on George Floyd, says he and his employees will no longer be calling police when people try and use fake bills at his store.

"Until the police stop killing innocent people, we will handle incidents like this one using non-violent tactics that do not involve police," Cup Foods owner Mahmoud Abumayyaleh said in a Facebook post Sunday.

Abumayyaleh, who was not present at the store at the time of Floyd's arrest, said even though it is state policy to call the police in the case of counterfeit bills, police "have shown time and time again that they do not know how to peacefully handle conflicts in our community."

"By simply following procedure we are putting our communities in danger," Abumayyaleh said. "Police are supposed to protect and serve their communities. Instead, what we’ve seen over and over again is the police abusing their power and violating the people’s trust.  We realize now that escalating situations to the police almost always does more harm than good, even for something as harmless as a fake bill."

Abumayyaleh said his nephew, who was present at the time of Floyd's arrest, was yelling at the police to stop and was pushed back by one of the officers, according to the Facebook post.

Abumayyaleh expressed his support of the Floyd family and said he is donating money to help pay for Floyd's funeral. Abumayyaleh also called on his community to continue advocating for the end of "institutional racism" and police brutality.

"We will continue fighting with our South Minneapolis community until justice is served, not only for George Floyd, Ahmaud Arbery, and Breonna Taylor, but for everybody who is affected by police violence in our country," Abumayyaleh said.

“Last night was a more peaceful night in the District of Columbia. Working together, federal and local law enforcement made significant progress in restoring order to the nation’s capital," Barr said.

"There will be even greater law enforcement resources and support in the region tonight. The most basic function of government is to provide security for people to live their lives and exercise their rights, and we will meet that responsibility here in the nation’s capital," he said.

Philadelphia Police Commissioner Danielle Outlaw addressed reports of vigilante law enforcement in the city and said, "We do not endorse or condone any form of vigilante justice.”

Asked about vigilante groups who were allowed to stay out past curfew, and why there was a disparity between them and others arrested after curfew, Philadelphia Mayor Jim Kenney said, "I don't know but we're going to find out."

Outlaw and Kenney continued to defend the use of tear gas on protesters who went on to the interstate and the mayor characterized it as a "last resort."

Kenney called the incident where an officer allegedly pulled down a protester's mask and used pepper spray "totally unacceptable."

The Bureau of Alcohol Tobacco and Firearms is taking the lead on the investigation into ATM explosions, according to Outlaw.

"We're working with the ATF who is taking the lead on these investigations to figure out exactly who is behind this. We believe that (they are) organized efforts, and coordinated efforts as well.”

Philadelphia Police tweeted today that there have been a total of 692 arrests from noon on Saturday until 9 a.m. ET today.

Crowds have begun filling the streets around the High Court in Paris for a protest against an alleged case of racist police brutality, despite the gathering being declared illegal by the police earlier Tuesday, according to CNN’s team on the ground.

Police in riot gear and around 50 police vans are also present as the protest is considered illegal on the grounds that gatherings of more than 10 people in a public space are forbidden as part of coronavirus restrictions.

In an echo of the Black Lives Matter protests in the US, this protest was organized by Assa Traoré, whose brother Adama died while being detained by police in 2016. The hashtag #JusticePourAdama (Justice for Adama) is trending in France.

Speaking to a crowd that gathered outside City Hall Tuesday, Richmond, Virginia, Mayor Levar Stoney issued an apology to protesters who were gassed by the police department during a peaceful protest on Monday night.

Stoney told the crowd that every person should be allowed to peacefully protest and that it's their right.

“We violated that yesterday," he said.

Stoney attempted to answer questions and demands by those gathered at City Hall, many of whom were at Monday’s protest. He said that disciplinary action would be taken and that he was looking at video of the incident.

Asked if he would march with them tonight, Stoney said he would.

Senate Democrats unveiled a new resolution Tuesday saying that “Congress condemns the President of the United States for ordering federal officers to use gas and rubber bullets against the Americans who were peacefully protesting.”

Washington, DC, Mayor Muriel Bowser announced that there will be another curfew Tuesday evening beginning at 7 p.m. ET and ending at 6 a.m. ET Wednesday.

"The curfew is 7 p.m. And that doesn't mean you're leaving at 7 p.m., that means you're off the street at 7 p.m.," Bowser said. "It is very important that everybody complies with the curfew. There are exceptions. If you are essential, if you're working, if you're voting, then you are able to do all of those things. But we're asking people to comply with the curfew."

Bowser noted that polls are open until 8 p.m. ET and those going to vote will be permitted to do so.

"You won't have any problems going to vote anywhere in the District of Columbia, through 8 p.m. today," she said. Canadian Prime Minister Justin Trudeau was silent for more than 20 seconds during a news conference Tuesday after he was asked what he thought of the forceful dispersal of protesters and President Trump calling for military intervention.

During the pause, Trudeau clearly looked uncomfortable, and seemed to be considering his response before finally answering that Canada has challenges with racism, too.

“We all watch in horror and consternation what’s going on in the United States, it is a time to pull people together, but it is a time to listen, it is time to learn what injustice is and it continues despite progress over years and decades. But it is a time for us as Canadians to recognize that we, too, have our challenges that Black Canadians and racialized Canadians face discrimination as a lived reality every single day. There is systemic discrimination in Canada, which means our systems treat Canadians of color, Canadians who are racialized differently than they do others,” said Trudeau during his daily news conference Tuesday from Ottawa.

Several cities, including Montreal and Toronto, staged sizable demonstrations over the last several days. With chants of "black lives matter," protesters showed solidarity with the family of George Floyd but also called on Canadian leaders to acknowledge that racism is a still a problem in Canada.

While most protests are continuing peacefully, Montreal Police reported that at least 11 people were arrested Sunday and investigations continue after looting and acts of mischief in the downtown core.