New York State Sen. Zellnor Myrie had been peacefully protesting with a crowd in Brooklyn when he was handcuffed and pepper sprayed by police, he told CNN late Monday night.

"I am from Brooklyn. I happen to represent a huge swath of central Brooklyn and when I heard there was a group of folks protesting police brutality I decided to make my way down," he said.

He wanted to join not only to show solidarity -- but also potentially act as a liaison between protesters and law enforcement, given his position as an elected official, he said.

Once he arrived, he alerted police of his presence, and wore a neon green shirt with his name and title on it. But still, he got caught up in escalating scuffles, he said.

"As I was obeying orders, they were telling us to back up, I was backing up. Trying to protect some of the protesters behind me. Being compliant. I started getting hit in my back by bicycles wielded by the police officers. I was pushed. I was shoved. Ultimately pepper-sprayed, and subsequently handcuffed. Simply because I was there to forcefully protest," he told CNN.

He said it took a little while for law enforcement to realize who he was -- and he was finally released and given medical attention.

But this treatment was "only because of my title," he said. "Had I not had the luxury of my title, I would have been in the system and processed, much like any of the other protesters."

A Twitter account that tweeted a call to violence and claimed to be representing the position of "Antifa" was in fact created by a known white supremacist group, Twitter said Monday. The company removed the account.

Although the account only had a few hundred followers, it is an example of white supremacists seeking to inflame tensions in the United States by posing as left-wing activists online.

Antifa, short for anti-fascists, describes an extremely broad, loosely-organized group of people whose political beliefs lean toward the left — often the far-left — but do not conform with the Democratic Party platform.

The revelation of the deceptive account comes as President Donald Trump increasingly blames left-wing activists for violence occurring at protests. On Sunday, he tweeted he would designate Antifa a terrorist organization, despite the US government having no existing legal authority to do so. 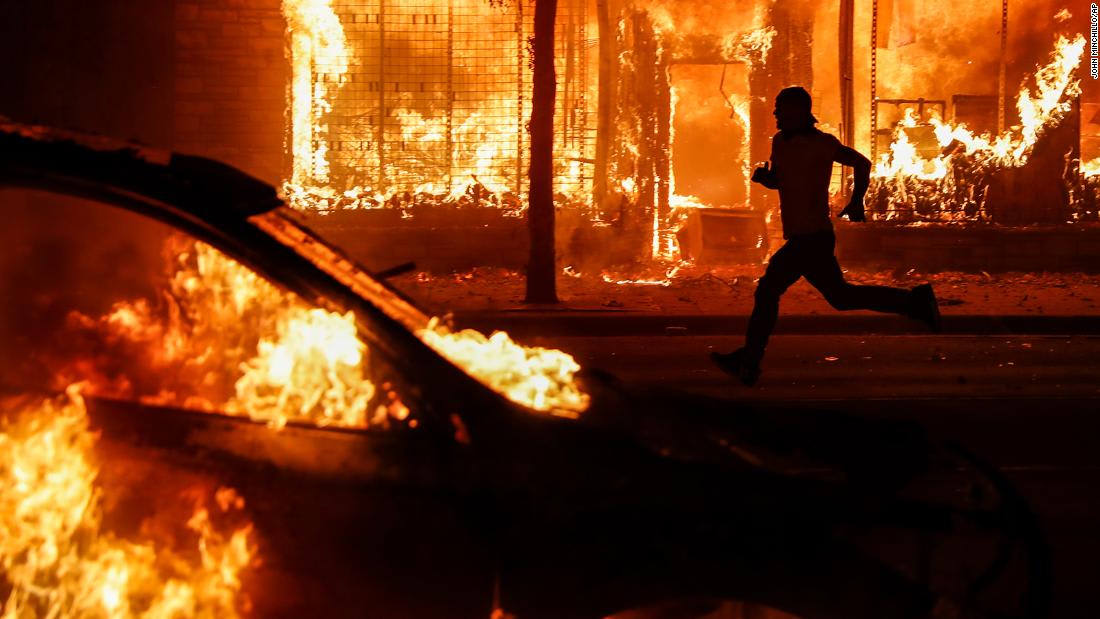 The mayor of Washington, DC, Muriel Bowser, tweeted that the actions of the federal police at the White House on Sunday had been "shameful."

"I imposed a curfew at 7 p.m. A full 25 minutes before the curfew & without provocation, federal police used munitions on peaceful protestors in front of the White House, an act that will make the job of (DC Police Department) officers more difficult. Shameful!"

She also urged residents to go home and stay safe.

What happened today: On Monday evening, Trump delivered remarks in the White House Rose Garden, before walking to the church to take a photo with a Bible.

Before his remarks, police released tear gas and fired rubber bullets at protesters near the White House in an effort to disperse the crowd for the visit to the church.

Minnesota authorities are now saying a man who drove a tanker truck toward protesters may not have done so intentionally.

What happened: On Sunday, Bogdan Vechirko drove a tanker truck toward a group of protesters on the I-35W bridge near Minneapolis. It doesn't appear anybody was injured. He was subsequently arrested and charged with assault.

On Sunday, Public Safety Commissioner John Harrington's department tweeted that the driver was “inciting a crowd of peaceful demonstrators.”

But Harrington walked it back today, saying, “We don't have any information that makes this seem like this was an intentional act."

Harrington says the state had not yet finished putting up roadblocks when Vechirko was on the freeway. “He saw the crowd, and from what it looked like, panicked,” said Harrington.

Vechirko is being interviewed by investigators, but Department of Corrections Commissioner Paul Schnell says it will be up to the county attorney whether to pursue the case.

Jail records show that Vechirko was still in custody without bail Monday night.

The autopsy: Independent medical examiners hired by Floyd's family said today that the cause of death was asphyxiation due to compression of the neck.

The examiner added that “compression of the back” from other officers who knelt against Floyd’s back also interfered with Floyd’s breathing.

"Hopefully, (Minnesota) Attorney General Keith Ellison will now consider that as he looks at the other officers," Crump told CNN tonight. "The ambulance was the hearse for George Floyd ... because he was dead at the scene."

In Oakland, California, just east of San Francisco, peaceful protesters are being detained and arrested for being on the streets past the curfew.

"This follows a very peaceful protest that we saw this afternoon. We saw hundreds of youth throughout Oakland marching throughout the streets. There was a rally at a local high school, then they came downtown," said CNN Correspondent Dan Simon on the scene.

The Oakland Police Department said in a tweet that it had detained more than 40 people for violating curfew, and urged people to stay home.

The curfew went into effect at 8 p.m. local time, and will stay in place until 5 a.m. Tuesday morning.

It's not just Oakland: Further south along California, police in Los Angeles also arrested protesters who are out after curfew. A small crowd was detained in Sunset Boulevard, in the middle of Hollywood, with their hands held by zip ties.

Police officers in squad cars were seen shouting out their windows that it was a curfew, and that those still out would be arrested and have their cars impounded.

The Los Angeles police said on Twitter that "dozens" had been arrested for burglary after a drugstore had been looted earlier in the day.

Oakland mayor on freedom of protest: Oakland Mayor Libby Schaaf acknowledged earlier today that there is a painful history of curfews in America used as a form of government oppression -- but that this was about safety and security rather than censorship.

“I want to be clear that this is in no way to quell what we are passionate about and that is free speech and protest,” she said.

Even as it approached midnight in Washington, DC, earlier tonight, protesters were still out in large numbers in the national capital.

At least one military helicopter was seen flying overhead and hovering in an attempt to disperse the crowds.

The helicopter was seen making slow low-level passes, using its propellers to kick up strong wind and debris. The tactic, known as a show of force, is commonly used by the US military in combat zones overseas to drive targets away from a specific area.

Protesters responded by raising their fists aloft in defiance.

The city curfew went into effect at 7 p.m. local time.

In Midtown Manhattan, there was widespread looting along the eastern portion of the neighborhood -- along the high-end shopping district Fifth Avenue and Madison Avenue, close to Trump Tower.

"I witnessed an eyeglass shop being looted. In some cases, just windows being smashed. And other cases stores are being broken into. This has been going on for at least two hours," he said. "Between 9 and 11 p.m., it was a real sense of anarchy on the streets in Midtown Manhattan."

The looting also extended further south into Herald Square and the iconic Macy's building, which was broken into, he said. There were also fires set and buildings vandalized.

Across the East River, there were up to a thousand protesters peacefully marching in Brooklyn, despite the citywide curfew in place.

When asked whether they will go home, protesters told CNN reporters they need to get their message across against police brutality.

Atlanta police have made 350 arrests related to the George Floyd protests since Friday, the department said on Monday.

Skirmishes after curfew: On Monday night, police and protesters clashed after the curfew came into effect at 9 p.m. ET, with protesters hurling projectiles and police responding by firing tear gas.

After the skirmish, the National Guard and Atlanta police got into formation and swept through the city's downtown, clearing out protesters quickly.