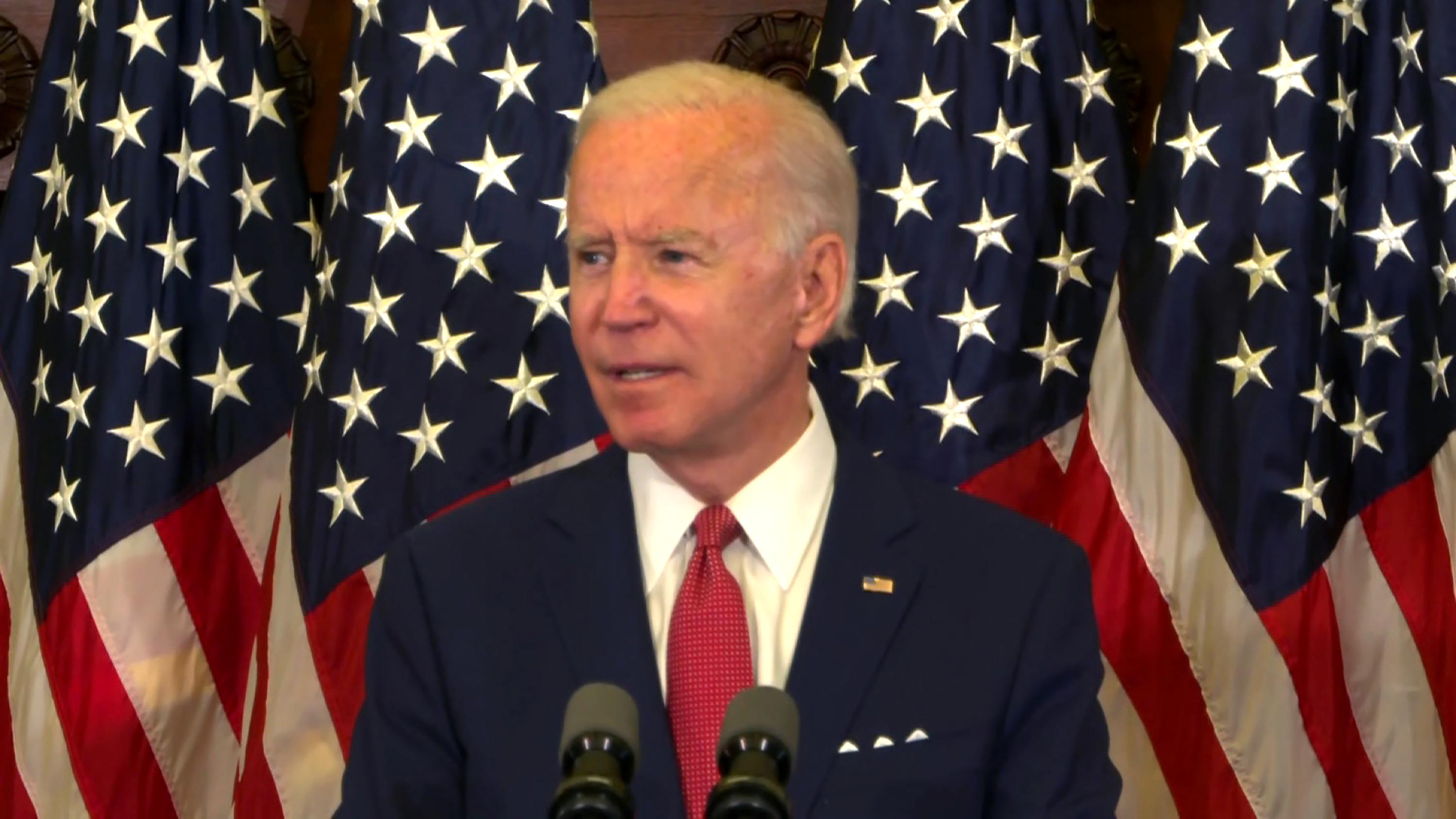 “When peaceful protestors dispersed in order for a President, a President, from the doorstep of the people's house, the White House, using tear gas and flash grenades in order to stage a photo op — a photo op — on one of the most historic churches in the country, or at least in Washington, DC, we can be forgiven for believing the President is more interested in power than in principle, more interested in serving the passions of his base the the needs of the people in his care,” Biden said in an address in Philadelphia.

Trump yesterday held up the Bible in front of a boarded-up St. John’s Episcopal Church and declared “we have the greatest country in the world" while surrounded by aides.

“The President held up the Bible at St. John's church yesterday. I just wish he opened it once in a while instead of brandishing it. If he opened it, he could have learned something. We are all called to love one another as we love ourselves. It's really hard work, but it's the work of America,” Biden said.

Biden referenced the Constitution's First Amendment, guaranteeing freedom to assemble and freedom of speech, for the protesters.

"We're not [going to] allow any president to quiet our voice. We won't let those who see this as an opportunity to sow chaos throw up a smokescreen to distract us from the real legitimate grievances at the heart of these protests," Biden said.

Leave them below and they may be used in a special event airing on Saturday at 10 a.m. ET: "Coming Together: Standing Up to Racism. A CNN/Sesame Street Town Hall for Kids and Families."

Please leave your name and contact information and someone may get in touch with additional questions.

George Floyd's family says the memorial and celebration of life services will be held on Monday and Tuesday next week, according to a release from the Fort Bend Memorial Planning Center.

"Floyd, a 46-year-old man who was raised in Houston’s Third Ward, was killed during an encounter with Minneapolis police officers," the statement says.

The public memorial for Floyd will take place on Monday at The Fountain of Praise Church in Houston, the statement says.

There will be a private service at an undisclosed location on June 9, according to the statement.

The statement says former professional boxer Floyd Mayweather will pay for the services. The statement also notes that other notable guests are expected at the private service, but does not detail who those guests will be.

The statement mentions the protests that have taken place across the country and asks those are participating "to do so peacefully." It also mentions the Covid-19 outbreak and asks all who are attending the memorial to wear a mask and gloves.

Former US Attorney General Loretta Lynch said President Trump’s decision to walk across the area near the White House where protesters were demonstrating was a “missed opportunity.”

“You don't have to agree, you don't have to accept what they're saying. People are saying loud and clear ‘we want to be heard, we want our governors to bond to us, not walk past us and take a picture.’ So I think it was a tremendous missed opportunity. … I don't think it was helpful at all,” Lynch said to CNN’s Alisyn Camerota.

Attorney General William Barr accompanied Trump when the President made the trip from the White House to St. John’s Episcopal Church to hold up a Bible.

Trump also threatened yesterday to invoke the Insurrection Act of 1807 law and take the unusual step of deploying active duty US soldiers to police US streets.

“We don't condone the loss of life for anyone, protesters and certainly not the police. But the issue here should be de-escalation. It should be how do we listen to people, how do we hear their concerns? And then how do we focus the appropriate law enforcement response on those who are trying to hijack these peaceful protests and engage in looting and violence for the sake of violence? … We have seen some tragic results, but we're not at the point of having the army train its guns on civilians,” Lynch said.

The President has tweeted about last night’s protests in New York after a night of unrest and widespread looting.

“New York was lost to the looters, thugs, Radical Left, and all others forms of Lowlife & Scum. The Governor refuses to accept my offer of a dominating National Guard. NYC was ripped to pieces,” he tweeted.

On Monday, Gov. Andrew Cuomo and Mayor Bill de Blasio ordered a curfew from 11 p.m. until 5 a.m., and an 8 p.m. curfew for Tuesday.

A little over 20,000 National Guard have now been activated to support civil unrest response, according to a Defense Department official.

At least 28 states and Washington, DC, have activated their National Guard forces.

In his first tweet of the morning, President Trump took a victory lap saying there were “no problems” in Washington, DC or Minneapolis last night.

This comes a day after peaceful protests outside the White House before curfew were dispersed with tear gas and rubber bullets, and military helicopters hovered over city streets, breaking some windows.

On a call Monday, Trump called on the nation’s governors to “get tougher” and “dominate.”

“The word is dominate. If you don’t dominate your city and your state, they’re gonna walk away with you,” he said, according to audio of the call on Monday obtained by CNN.

Washington, DC, Mayor Muriel Bowser spoke with CNN’s Alisyn Camerota on New Day about the way protesters were cleared from the area in front of St. John’s church yesterday.

"We were very shocked and quite frankly outraged that people who were not violating the curfew, and who did not seem to have provoked attack, were attacked in a move out by the federal law enforcement officials who were directed to clear the way for the president," Bowser said.

“At no time do we think it was appropriate that people who had not violated the curfew or anything else receive that treatment,” she said.

When asked about the military being sent in to the nation’s capital to assist police, the mayor said it would be “inappropriate.”

“Police have policing power. And bringing in the military to police work is inappropriate, in any state, in the United States of America, without the consent of the governor and it will be inappropriate in Washington, DC.”

Bishop Mariann Edgar Budde of the Episcopal Diocese of Washington, DC, slammed President Trump’s photo op at a church near the White House as a “charade.”

“This was a charade that in some ways was meant to bolster a message that does nothing to calm — to calm the soul and to reassure the nation that we can recover from this moment, which is what we need from a President,” Budde said in an interview with CNN's John Berman.

About the visit: Peaceful protesters just outside the White House gates were dispersed yesterday with tear gas, flash grenades and rubber bullets, before Trump walked from the White House to St. John’s Episcopal Church after giving an address in the Rose Garden. Trump held up a Bible outside of the church and said “we have the greatest country in the world.”

Budde said Trump doesn’t frequent the church or any other in the diocese.

“He did nothing to say to them that your future is before you and I will protect you and do all that we can to make this country worthy of you — all the things that we need and deserve from anyone who is in leadership, spiritual or political, at this time," she added.

St. John’s sustained damage from a fire in one part of the building, but Budde said the church is structurally fine.

“We will rebuild; buildings can be rebuilt, lives cannot be brought back from the dead,” she said.