These are the cities and states with curfews Tuesday night due to the protests across the country in response to George Floyd’s death in Minneapolis, Minnesota.

Former NBA player Stephen Jackson said the reason his longtime friend George Floyd moved away from his hometown of Houston, Texas, to Minneapolis, Minnesota, was to "provide for his family, be a better father."

Jackson joined Roxie Washington, the mother of George Floyd's 6-year-old daughter, as she delivered emotional remarks to the media this afternoon.

"He was a good man as a father," Washington said of Floyd as she wept. "He was so happy to have her... he loved her. He loved her so much."

"He took care for us, he provided for us," she added.

Declining to go into numbers, a senior official with the New York City Police Department tells CNN that there will be “enhanced deployment” tonight.

“The goal is to minimize risk to the public and maximize efficient use of resources," the official said.

On Monday, in a statement, New York Gov. Andrew Cuomo's office said that the number of NYPD officers on the street would double from 4,000 to 8,000.

Roxie Washington, the mother of George Floyd's daughter Gianna, told reporters she wants to see justice for Floyd and for her daughter.

"I don't have a lot to say because I can't get my words together right now, but I want everybody to know that this is what those officers took. At the end of the day, they get to go home and be with their families. Gianna does not have a father. He will never see her grow up, graduate. He will never walk her down the aisle. If there is a problem she's having where she needs her dad, she does not have that anymore," she said.

Asked about President Trump’s comments to the nation’s governors yesterday on a call where he admonished them for not doing more to quell the violence during recent protests, Kentucky Gov. Andy Beshear said the Trump's statements were not helpful.

“The President’s statements about bringing in the military are not appropriate,” Beshear said. “I don’t know if he’s speaking out of frustration, but what we have seen here in Kentucky … no, no he should not do it.”

“While I hope that we ultimately come out of this and go on forward, handle things appropriately, we do not need the federal government coming in here and taking any of those actions,” he added.

Former Capt. Eric Adams with the New York City Police Department told CNN's Wolf Blitzer George Floyd's killing "reminded me as a child being beaten by police, and urinating blood for weeks after that beating."

Adams, who is now Brooklyn Borough President, said, "This is a moment for me," adding that the "emotion is unbelievable."

On the protests in New York and around the country, Adams said the peaceful protests "brings me joy." Adams said he is also concerned about "professional agitators" who he believes are trying to "hijack a righteous fight to end police abuse"

"Their goal is to see our cities burn and we cannot allow that to happen," he said.

Adams said he supports NYC's 8 p.m. curfew "as long as it's not tool that's used to stop people from voicing their right to protest."

On President Trump's rhetoric and comments that he'll send in the military to police cities, Adams said, "The President has been a complete embarrassment to our nation."

He added that "advice" from Trump is "something that we don't need right now." 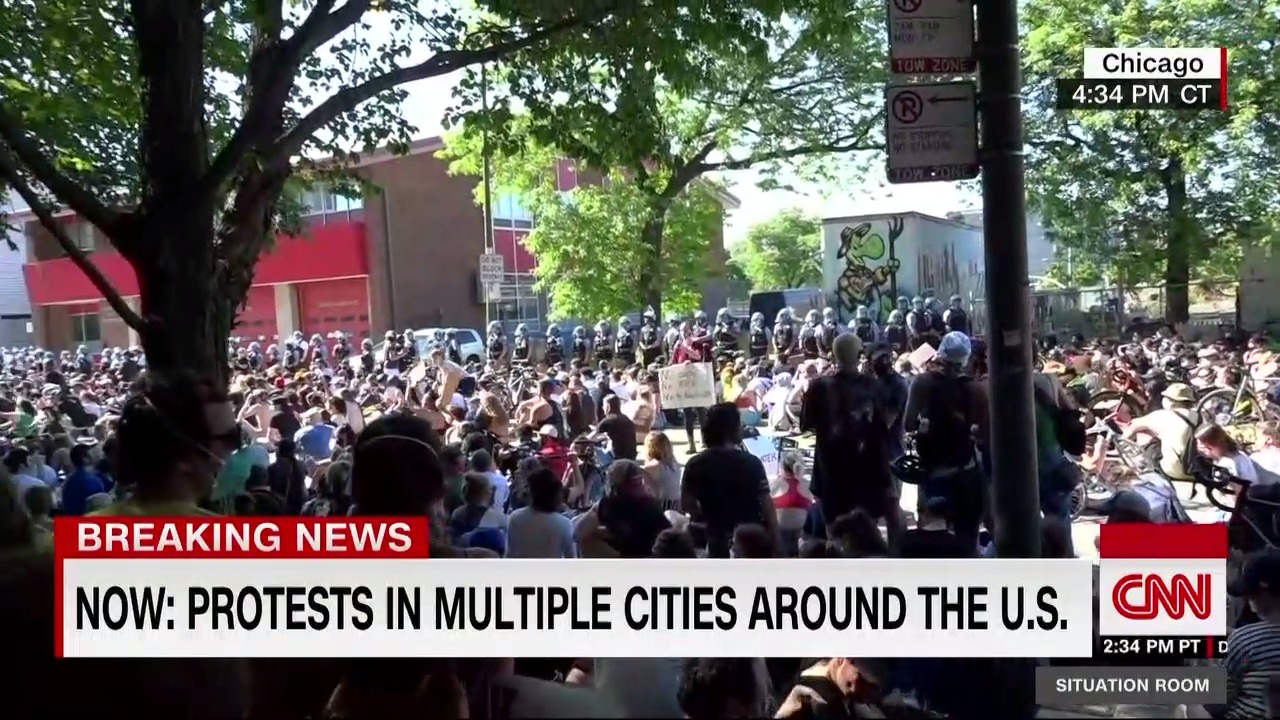 Thousands of people peacefully protested and marched in Chicago this afternoon.

CNN's Ryan Young gathered with protesters as they marched through city streets. They eventually settled into a spot, where they appeared to be sitting and facing officers.

"This protest has been remaining absolutely peaceful," Young said.

"They've been having the sort of meetings and conversations and different intersections that sort of talk about the platforms they want to get out there. On some occasions they engage with police officers. Right now there is a group of speakers is talking to them. This is such a big difference between what we saw over the weekend when some large protests went out of hand. That's not the case here," he reported.

Protesters have asked police for reforms, they've talked about George Floyd and have requested a civilian review board so they can start seeing differences throughout the country when it comes to policing, Young said. 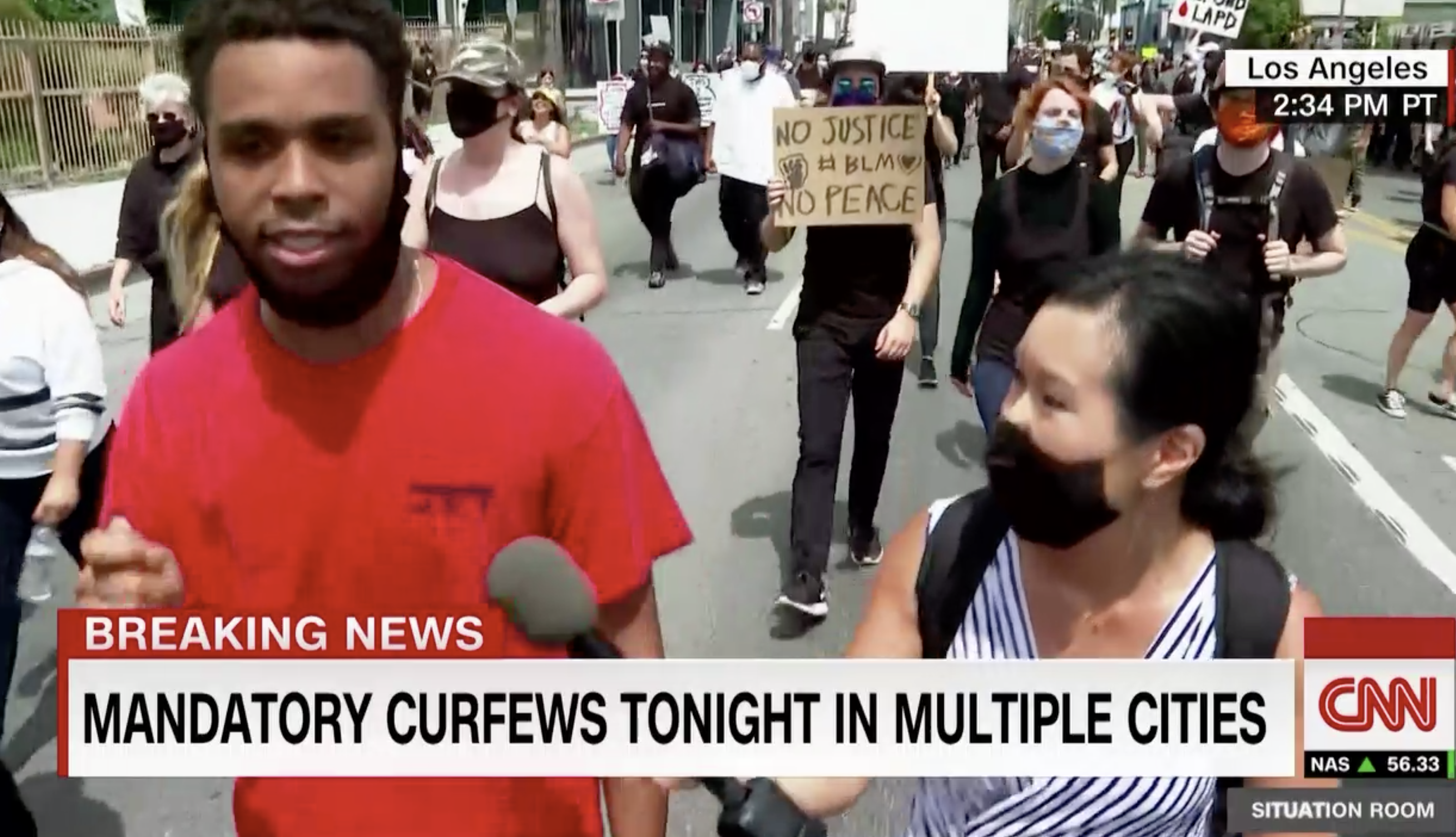 A protester marching today in Los Angeles told CNN's Kyung Lah that protesters want "peace" and are "standing in solidarity for a system that has oppressed people for hundreds of years."

"We want peace. You look at all these wonderful people out here, look at us. This is not just black people, these are all people out here," he said. "We're trying to tell the police all over the country, if you just march with us, you're showing you're not standing in solidarity for a system that has oppressed people for hundreds of years. We just want you to show that you are with us. Because this is the America that I want my kids to live in and be proud of. That finally stands up to the meaning of its creed."

Memorials for George Floyd will take place in three cities beginning on Thursday, according to a release from family attorney Benjamin Crump.

Here's what we know about the memorials: