Over the weekend, demonstrators gathered in London, Berlin and Auckland, among other cities, to protest against police brutality in solidarity with the US crowds.

Britain: In London, protesters rallied in Trafalgar Square on Sunday morning, in defiance of Britain's lockdown rules which prohibit large gatherings. Some participants marched to the US embassy.

Germany: Crowds gathered in Berlin in front of the US embassy on Saturday and Sunday. Participants wore face masks and carried signs declaring "Black lives matter" and "Justice can't wait."

France: Activists in Paris wearing black clothing and face masks took a knee and held up signs reading "I can't breathe," "We are all George Floyd" and "Racism chokes us" in Paris on Monday.

Denmark: Chants of "no justice, no peace" were heard In the streets of Copenhagen on Sunday, as protesters marched over Floyd's death. Some rallied outside the Danish capital's US embassy.

Italy: In Milan, crowds held a flashmob near the city's US consulate on Thursday.

Brazil: People protested outside the Guanabara Palace, the home of the state government, in Rio de Janeiro on Sunday, while in Sao Paulo, some brought signs showing solidarity with the US protests to an existing demonstration against President Jair Bolsonaro. 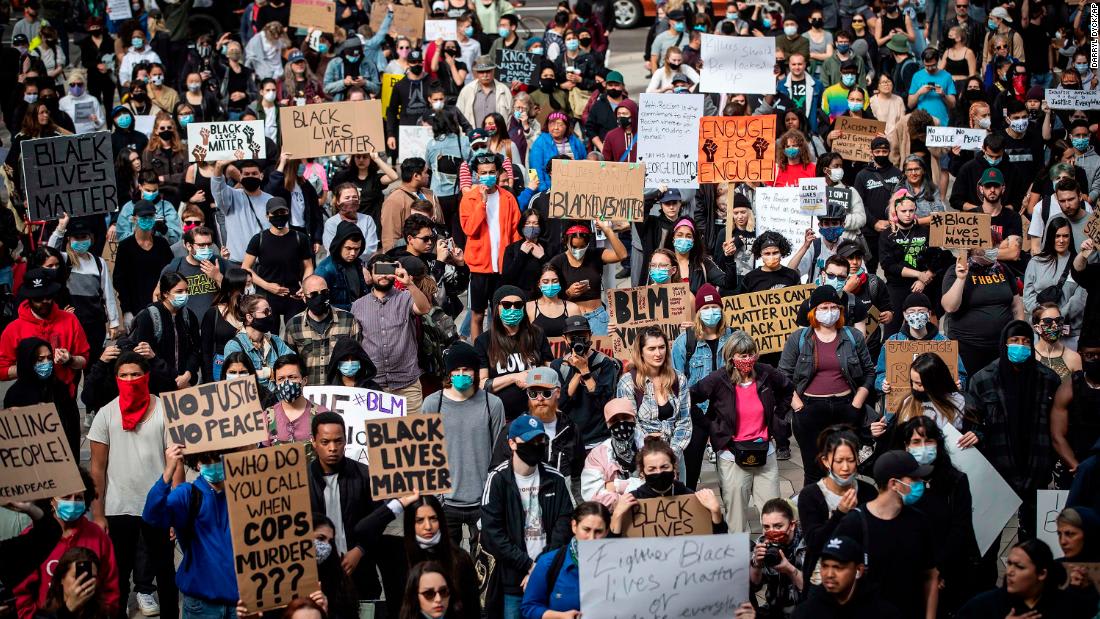 The family of a black man killed by a white bar owner during protests in Omaha, Nebraska, said a prosecutor rushed to judgment by declaring the shooting an act of self-defense.

On Monday, Douglas County Attorney Don Kleine said that after viewing videos of the incident with police officials and homicide detectives, he decided not to charge Jake Gardner in Saturday night's death of James Scurlock.

But attorney Justin Wayne, who represents the Scurlock family, said the 22-year-old should not have been shot during a scuffle on Saturday night, and that the case should go to a grand jury.

"I would like to see my day in court," said Scurlock's father, James Scurlock II.

What happened: Two videos depict scenes from the incident. As described by prosecutors, Gardner's father asked demonstrators outside the Gatsby bar to leave and pushed one protester.

An unidentified man can be seen pushing the elder Gardner back, and the son intervened. Wayne claims Scurlock was not part of that group.

Jake Gardner had a handgun tucked in his waistband and lifted his shirt to show it during his confrontation with protesters, Kleine said of one video.

Two people jumped on Gardner's back and he fired two warning shots, the county attorney said. Within moments, Scurlock jumped into the fray, according to authorities.

Gardner told police he was put in a chokehold and he begged for the assailant to get off of him, Kleine told reporters.

That's when Scurlock was shot in the clavicle and killed. 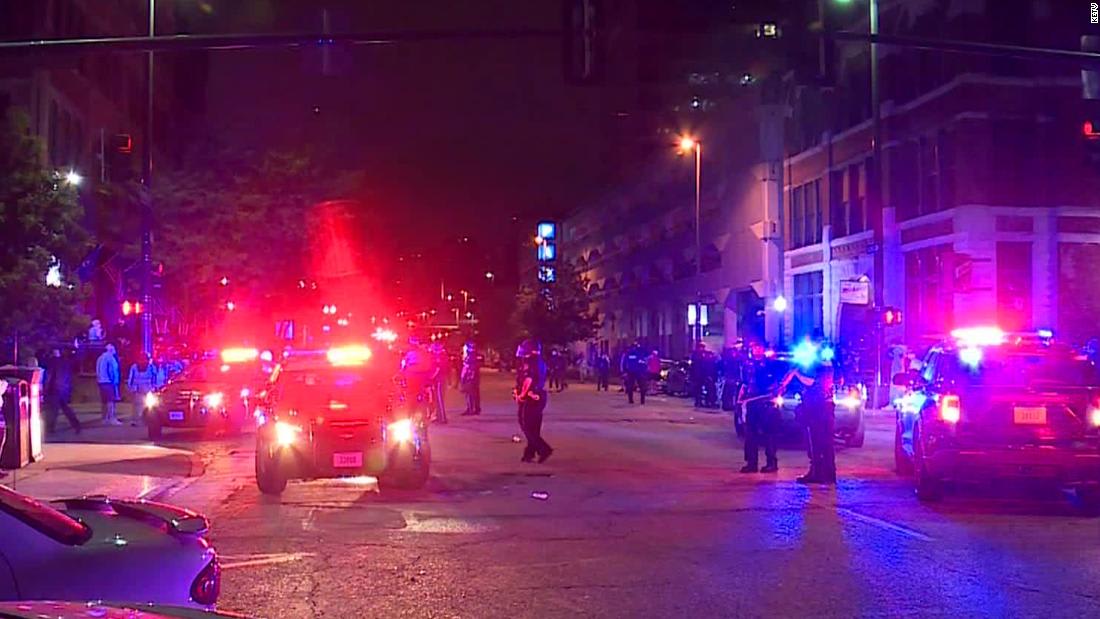 There are between 7,000 to 10,000 people demonstrating in Portland, Oregon today, according to Portland police spokesperson Michael Roberts.

He said there are two main groups of protesters -- one that started at Pioneer Courthouse Square and one at Revolutionary Hall.

“The group from Revolutionary Hall marched across the Burnside bridge to mid-span where they all laid down for a brief period,” said Roberts. “They are continuing downtown and it had been peaceful thus far. We have not made any arrests related to this demonstration at this time.”

There is still a small group of protesters in Los Angeles outside the mayor's residence, and police are now beginning to make arrests, hours after curfew.

Many of the protesters are still sitting on the ground, with their hands up together, chanting "Peaceful protest," said CNN Correspondent Kyung Lah on the scene.

As the protesters are led away, the remaining crowd sitting on the ground cheer for them. The arrested protesters are then lined up against a wall, where they give the police their information and are bused out to be further processed elsewhere, said Lah.

Compared to the scuffles and arrests taking place in other parts of the country, this scene is remarkably calm and orderly -- in line with the peaceful tone of the protests all day.

"They have been supportive of one another. People in the apartments and the houses that they've walked by have run out to give them water, encouraging them to keep going."

The protests took place in different parts of the city and county today, including Hollywood, Downtown Los Angeles, and the residential neighborhood of Hancock Park, where Mayor Eric Garcetti resides.

Since George Floyd's death, nine New York Democratic elected officials have at least partially reallocated their police and crime-related campaign donations, most of them to bail funds in New York City.

It all started with a 19-year-old college student from Queens.

Since sharing his "Who's Taking Cop Money?" Google spreadsheet on Twitter on May 29, eight Democrats -- including a state senator, state assembly members and New York councilmembers -- have vowed to donate their police-funded contributions to bail funds or criminal justice reform organizations.

Fernando said he requires these elected officials to send him proof of their reallocated money before updating his spreadsheet.

"Your contributors are a reflection of who you are," he said. "I think it's fair to ask politicians to take money that aligns with the values they espouse. If you're going to fight to end solitary confinement in New York, you shouldn't be taking money from corrections officers." 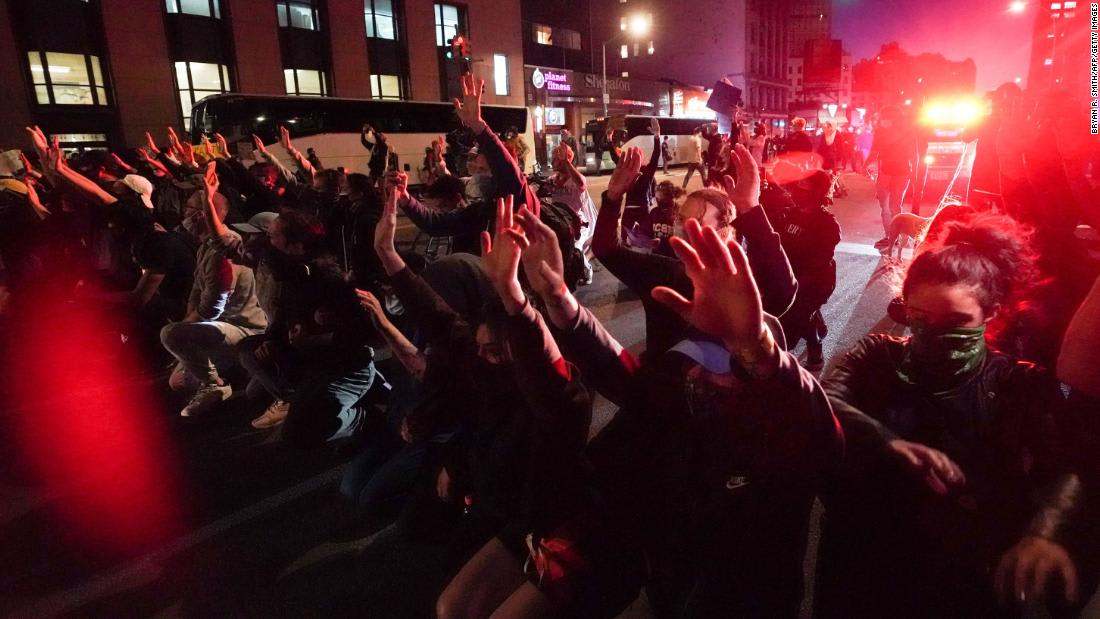 A 19-year-old called out New York Democrats accepting police campaign donations. To his surprise, many have listened

Seattle Mayor Jenny A. Durkan signed a civil emergency order on Tuesday extending the evening curfew through June 6, according to a copy of the order obtained by CNN.

The curfew extends every night from 9 p.m. local time until 5 a.m. the next morning. In the order, Durkan cited violence and looting as factors prompting the curfew, as well as the dangers of Covid-19 infection that are still present.

The curfew does not apply to law enforcement, emergency personnel, city and government officials, members of the news media authorized in advance, and workers engaged in essential functions like medical care, according to the order.

Those who violate the curfew could face imprisonment and/or a fine of up to $500.

As protests over police brutality erupt across the United States, reports are on the rise of officers responding with chemical agents, rubber bullets and other forceful tactics.

In some cases, police leaders say violence in the streets leaves them with no other choice. And President Trump has pushed for local officials to ramp up their show of force. But protesters and police critics argue that some officers are escalating tensions with their actions.

"They're making the argument for the demonstrators, that American policing remains unreformed and out of control," says Alex Vitale, a professor of sociology at Brooklyn College who studies police response to protest.

Sometimes the tear gas is being fired in response to violence and looting, and sometimes protesters allege it's being fired without provocation.

Excessive force: Authorities in several cities have said they're investigating allegations that some officers have used excessive force in their responses to protests.

In Atlanta, two officers were fired after police say they broke the windows of a vehicle, yanked two protesters out of the car and tased one of them.

Targeting journalists: Through it all, reports of journalists being arrested and assaulted while covering the protests have also been growing.

A photographer in Minneapolis said she was blinded by a rubber bullet. Also in Minneapolis, a CNN crew was arrested while giving a live television report on Friday -- and then released about an hour later 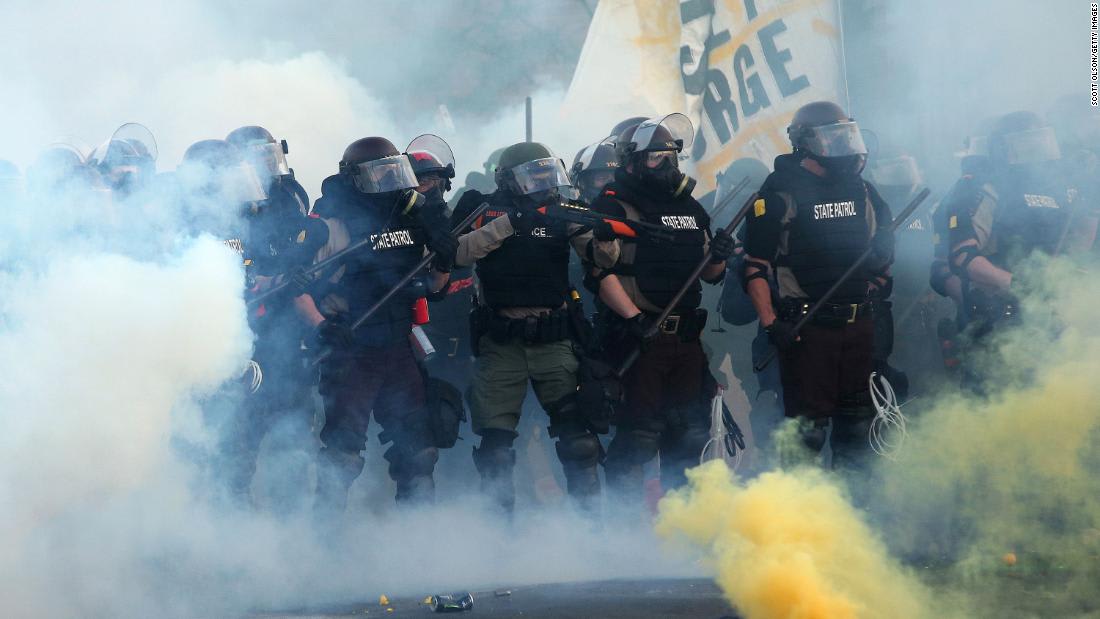 Police brutality prompted the protests. In some cities, the police response only proved the protesters' point

Uber, Lyft and other "for hire vehicles" in New York City will cease ride services Tuesday night into Wednesday morning, in keeping with the city's curfew.

The move comes at the request of the city, a source familiar with the matter told CNN.

For-hire vehicle services shut down at 8 p.m. local time Tuesday and will resume at 12:30 a.m. Wednesday, the source said. Yellow cabs will continue to operate.

The move means essential workers, who are exempt from the curfew, will be limited to walking, biking, taking yellow cabs or using public transportation to get around New York City on Tuesday night. Many people are still wary of using the subway because of the continued risk of Covid-19.

Lyft is taking similar actions in other cities where it operates, according to the app. In Santa Monica, California, for example, the Lyft app says ride services are suspended during curfew, from 2 p.m. Tuesday to 5:30 a.m. Wednesday.

An Uber spokesperson said the company is working with cities across the United States to determine how it should operate during curfews. 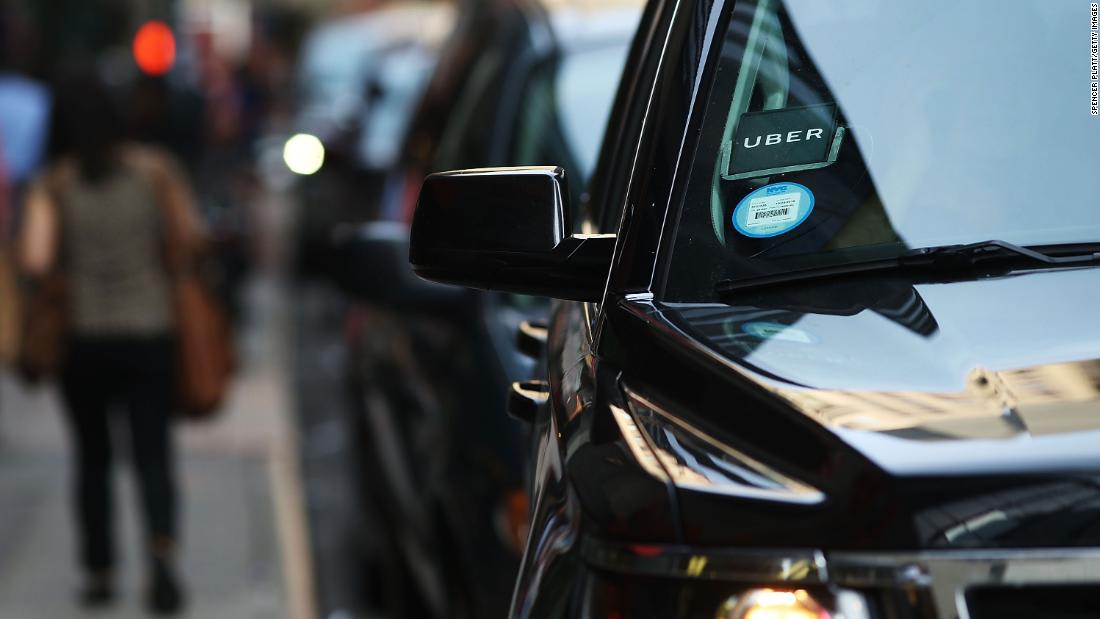 Police in Charlotte, North Carolina, said they had arrested a protester who was armed with "an AR Rifle with two 30-round magazines," according to a statement on Twitter.

The police department also said officers were deploying "Riot Control Agents to disperse the crowd for safety," and described some people throwing bottles.

Earlier tonight, the police said on Twitter that they had deployed chemical agents after being targeted with projectiles.

“After being assaulted with bottles, rocks, and chemical agents multiple dispersal orders were given,” the police tweeted. “Officers gave protestors multiple avenues to leave the area. After refusal to leave, chemical agents were deployed to protect officers and the public.”