The medical examiner’s office in Hennepin County, Minnesota, released a report that said George Floyd’s death was a homicide resulting from being restrained.

The statement said the cause of death is “cardiopulmonary arrest complicating law enforcement subdual, restrain, and neck compression.”

It further added that Floyd died from experiencing a “cardiopulmonary arrest while being restrained by law enforcement officer(s).”

The medical examiner’s office statement said Floyd had indications of heart disease including “arteriosclerotic and hypertensive heart disease,” as well as fentanyl intoxication and recent methamphetamine use.

Amid nationwide protests in the aftermath of George Floyd's death, journalist Jemele Hill urged America to keep the focus on the substance of the message.

While many cities have been overcome with violence in recent days, Hill noted that such "moments only take away from [the movement] if you allow those moments to have more power than they're worth."

Hill, who writes for "The Atlantic," insisted that those engaging in looting and destruction are in fact not the groups seeking change.

"A lot of those more violent moments are not coming from the people who went there with the intent of being heard, of making people understand the gravity of this problem in America," she told CNN's Jake Tapper.

The protesters truly speaking out against police brutality and racial injustice aren't "coming there looking for violence. They're coming there because they feel ignored. They're frustrated and they're angry," Hill said.

Speaking live with Tapper during "The Lead," Hill was clear in her insistence that shining too bright a light on those who arrive at protests with a goal of "not disrupting in a constructive way" opens the door for anyone hoping to ignore the actual issues at hand.

"As we've seen similar unrest and rebellions that have occurred after major national tragedies, you have seen that the method becomes what people want to talk about versus the message," she said.

Quoting Martin Luther King Jr., who famously labeled rioting as "the language of the unheard," Hill told Tapper, "I implore to people right now, if you're caught up on looting... you just don't want to hear the message."

Federal authorities have charged a man for civil disorder, carrying on a riot, and possession of unregistered destructive devices associated with recent clashes between violent protesters and police in Minneapolis, according to a federal criminal complaint obtained by CNN.

In videos allegedly posted to his Facebook account on May 29, Matthew Lee Rupert, 28, was seen passing out explosive devices to other rioters and encouraged them to throw the devices at law enforcement officers, according to the complaint.

After handing an explosive device to another rioter and telling the person to throw it at police SWAT officers, the complaint states that Rupert is heard on video saying “he’s throwing my bombs,” adding, “he’s going to bomb the police with them."

After an audible explosion is heard, Rupert is heard saying, “good shot my boy,” according to the complaint, as well as, “F*** 12,” a derogatory phrase often directed at law enforcement.

In one video, the complaint alleges Rupert asked for lighter fluid, entered a Sprint cell phone store, and is later heard on video saying, “I lit it on fire.”

Rupert was arrested early Sunday morning by Chicago police officers after allegedly violating the city’s emergency curfew order, the complaint states. After searching his vehicle, authorities found several destructive devices, according to the complaint. He was subsequently transferred into federal custody, according to a Justice Department statement. 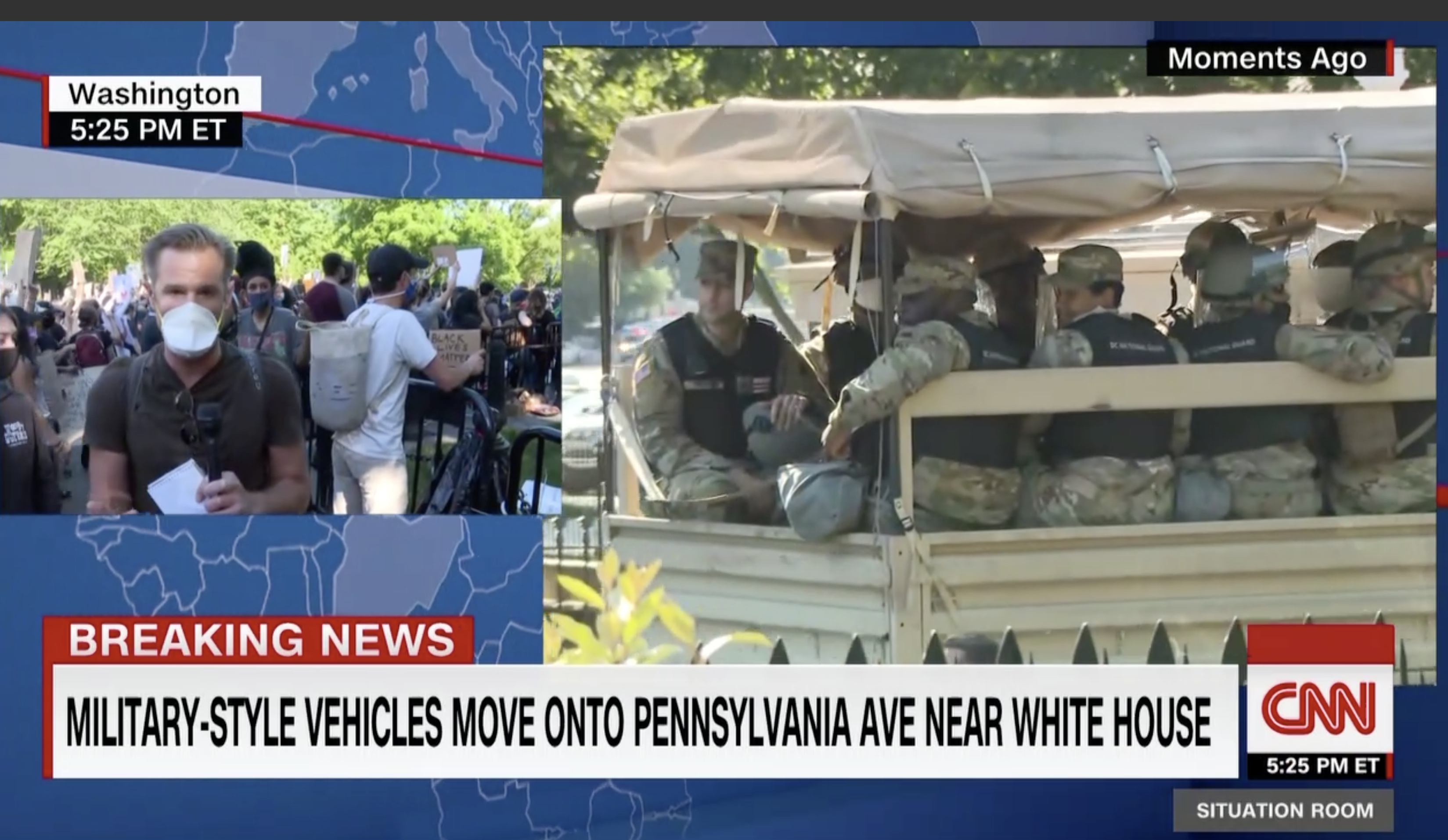 As protests continue in the nation's capital, military vehicles were spotted moving to Pennsylvania Avenue, near the White House.

An active duty military police battalion consisting of 200 to 250 military personnel is now in the process of deploying to Washington, DC, and could be in the nation's capital as soon as tonight, three US defense officials tell CNN.

The troops are expected to provide security in the nation's capital but not perform law enforcement duties such as arrest and detention of protesters or rioters.

Two defense officials said the troops will be coming from a unit at Fort Bragg in North Carolina.

Because of Washington, DC's unique status, the deployment does not require local authorization.

There is no indication that President Trump is invoking the Insurrection Act, which is not required due to the fact that the forces will not be performing law enforcement actions.

The Pentagon did not immediately respond for request for comment.

Senate Majority Whip John Thune told CNN he believed President Trump should have a different "tone" when addressing the country during this unrest following the death of George Floyd in Minnesota.

“I think the country is definitely looking for healing and for calm," he said. "And I think that’s the tone the President needs to project when talking about what’s happening around the country. I think leaders right need to have empathy and humility and respect.”

“I think he needs to strike a tone that fits the level of frustration country's experiencing right now, and I hope in the future, he’ll do that,” Thune said, adding that some of Trump’s tweets are “not helpful.”

Sen. John Cornyn, a member of Senate GOP leadership, said he believed Trump should address the nation "sooner rather than later.”

He said he believed "it’s important” for Trump to offer more of a unifying message in the midst of the deep unrest across the county.

Cornyn sidestepped a question about Trump’s tweet when he said “when the looting starts, the shooting starts,” noting the country is divided between pro-Trump and anti-Trump factions.

"He repeatedly and viciously attacked governors who are doing everything we can to keep the peace while we're working to save lives in a once in a generation pandemic," she said at a news conference.

She continued: “It was galling because we are at a point in time where people need hope and unity and a strategy to pull people together and to save lives."

She said Trump's comments feed "into that anxiety, that understandable exhaustion, that my African American friends talk about."

"To assert that we should be dominating and if we don't, they're going to come in and do it is the antithesis of what we need right now is a country which is a leader who can bring us together, can focus us and say we're going to get through this and give us the kind of pep talk the nation need," she said. "It just sow more seeds of division and it makes it more dangerous."

Miami has lifted a curfew that was issued Saturday due to protests, according to a statement from the city.

The curfew in unincorporated Miami-Dade County remains in effect from 9 p.m. to 6 a.m. local time until further notice.

White House aides have been instructed to prepare for a possible statement from President Trump from the Rose Garden, an official told CNN, where he could address racial unrest gripping the nation for the first time since protests broke out across the country

The official said the statement could come at 6 p.m. or 6:30 p.m. ET, but said plans could still change.