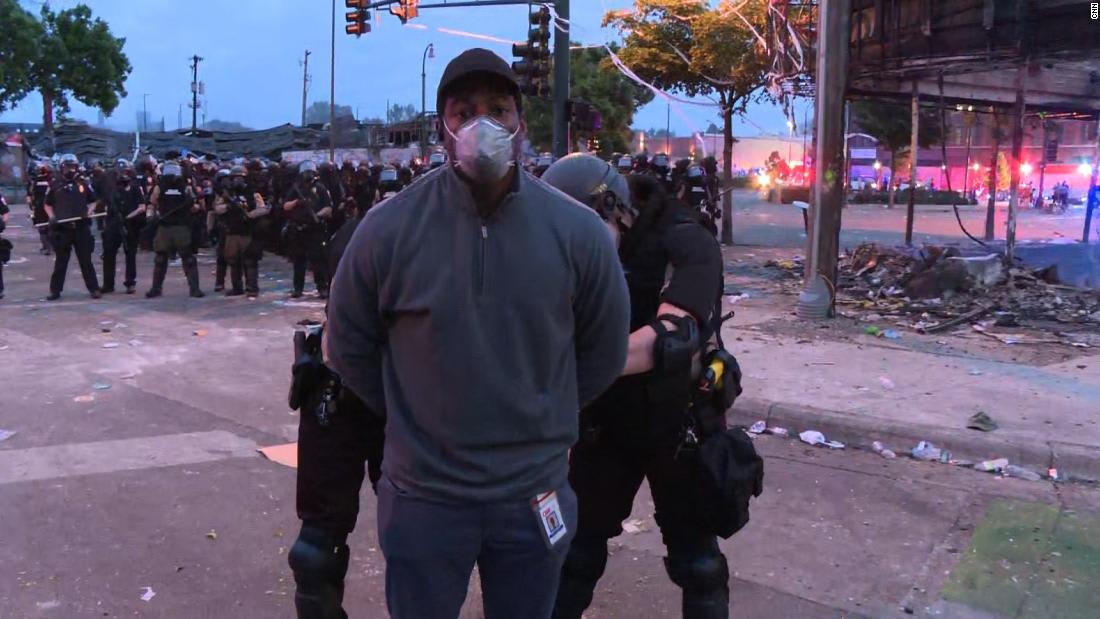 Laura Coates, CNN's legal analyst, said the arrest of CNN reporter Omar Jimenez is "why people don't have faith in what might happen in Hennepin County."

Jimenez, who identifies as both black and Latino, was arrested early on Friday while reporting live on the protests in Minneapolis. Coates pointed out that Josh Campbell, another CNN journalist on the ground in Minneapolis, was treated very differently.

"He was asked the same line of questions that Omar Jimenez was. One was arrested ... the letters CNN, meant nothing for Omar, they meant everything, apparently, to add the credibility that was given and extended to Josh Campbell by default," Coates said.

Coates added: "Four officers who were involved in the killing of an unarmed black man whose body was on the street and handcuffed behind his back, they have not been arrested since Monday or charged with any crime. Omar Jimenez shows a credential, a camera is running, his crew and producers are saying who they are and they were arrested sooner. Optically, this is why people don't have faith in what might happen in county."

Jimenez, whose mother is black and father identifies as Colombian, worked in Baltimore at WBAL-TV before joining CNN in 2017.

In Maryland, he covered the trials for the officers charged in the death of Freddie Gray, was the lead story on the station's Emmy award-winning special on opioids, and published pieces on opioid influence in the state and the fight against child sex trafficking.

Jimenez first worked with CNN's Newsource, based in Washington, DC.

While at Newsource, Jimenez reported from the ground in Paris in the aftermath of the Notre Dame Cathedral fire, from Las Vegas just hours after the mass shooting there, the deadliest in modern American history and from Florida and Texas during the 2017 hurricanes.

He graduated from the Medill School of Journalism at Northwestern University, where he also played on the varsity men's basketball team. While in school, Jimenez was also an intern with CNN.

Learn more about Jimenez's career below:

CNN's reporter Omar Jimenez, who was released from custody in the past few minutes after he was earlier arrested live on air, said he was comforted by the fact that at least people could see what was happening.

"That gave me a little bit of comfort knowing that you guys saw what was happening, I was living what was happening and the country was seeing what was happening unfold in real-time before their eyes.
As we were walking away, and you were taking in the entire neighborhood that had been decimated from the passion of the protesters and unfortunately some of the rioting and looting that we had seen, it did cross my mind that, what is really happening here?"
Watch:

CNN correspondent Omar Jimenez and his crew have been released from police custody.

Jimenez, along with producer Bill Kirkos and photojournalist Leonel Mendez, were arrested shortly after 6 a.m. ET live on CNN air, while reporting on the protests in Minneapolis.

The team was released from the Hennepin County Public Safety facility in downtown Minneapolis just a few minutes ago.

CNN president Jeff Zucker spoke with the governor of Minnesota, Tim Walz on Friday morning, following the arrest of CNN's team in Minneapolis,

Walz said he "deeply apologizes" for what happened and is working to have the CNN team released immediately.

Walz described the arrests as "unacceptable," said CNN's team clearly has the right to be there, and said he wants the media to be in Minnesota to cover the protests.