Nine members of the Minneapolis City Council on Sunday announced they intend to defund and dismantle the city's police department following the police killing of George Floyd.

Council President Lisa Bender spoke to CNN's Chris Cuomo about what that would really mean.

"What we pledged was to start a year-long conversation with Minneapolis residents to help us reimagine what public safety looks like as we make those short-term fixes that are so clearly needed in our department," Bender said.

Bender said the pledge was a "long-term commitment" in which the city would need to "build up those systems of public safety as the highest priority, along with getting more accountability in our police department."

Would someone still respond to 911 calls? "If something is happening there needs to be someone to call. We need to make sure every single person in our community feels safe. But we have a crisis of confidence in our police department," Bender said.

How would that work? "We've looked at every reason that folks call 911. Why are people in Minneapolis calling for help? And we're starting to pair what's the right response to those calls. In the short term that helps our police officers focus on the work that they're trained to do, while we have a better response to people who have a mental health crisis or a physical health crisis," Bender added.

Policing "isn't working" for many: "The system of policing isn't working for a lot of victims of crime. We have thousands of rape kits that have gone untested. We need to improve our response to all kinds of different violations of public safety, because again that trust in the system is so eroded that our community is across the board," Bender said.

"We should look at budget, community safety, our city's charter, and understand ways we can adjust our charter, which would include potentially going to a vote of the people to make some of these longer term changes," Bender said. "The commitment we made is real, the work is serious, and it builds on years of investment in our community. And those answers will absolutely be made in partnership with our community. With lots of community engagement."

A crowd of police officers in Philadelphia gathered outside their local union headquarters on Monday to show their support for one of their own -- a staff inspector facing assault charges after allegedly beating a college student at an anti-racism protest last week.

Like all criminal defendants, Philadelphia Police Staff Inspector Joseph Bologna is innocent until proven guilty. But it seemed like the crowd of more than 100 applauding officers already made up their minds, despite viral footage of Bologna hitting the student in the back of the head with a metal baton, sending him to the hospital.

Following the rally, the union that represents Bologna issued a statement, saying it "will not stand-by and watch Inspector Bologna get railroaded."

As public opinion shifts on issues of police violence and racial discrimination, and cities begin to rethink their approach to law enforcement, powerful police unions across the country are digging in, and preparing for a once-in-a-generation showdown over policing. 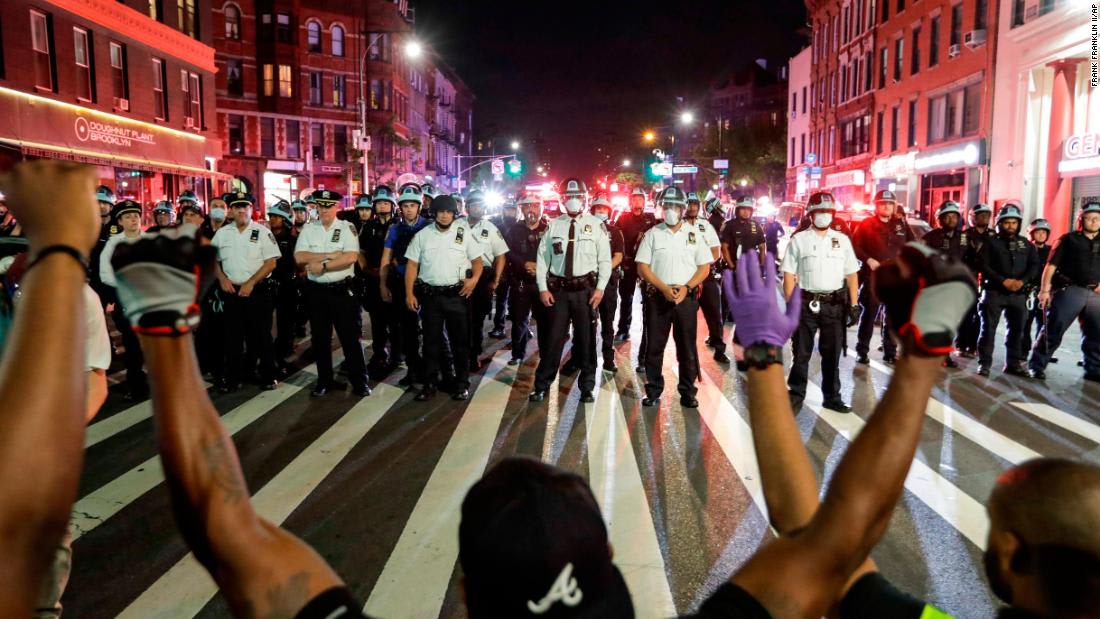 Police unions dig in as calls for reform grow

Williams said that she was "deeply saddened that it has taken multiple acts of police brutality to make people painfully aware of the racism that still pervades America." But she also said she was "amazed at the solidarity that has erupted across the USA."

“In the past, I had the honor of fighting for equal prize money for all women’s players at the grand slams in tennis. To make this even more simple to understand, just as sexism is not only a ‘women's issue,’ racism is not only a ‘black issue.’
When we fought for and won equal prize money, everyone pitched in, men and women, all colors all races. And we won," Williams said. “When the majority groups stay quiet, when they sit in the chair of disbelief, they unwittingly condone the oppression of marginalized groups. Those with power and privilege actually have an easier time getting heard. They must CONTINUALLY exercise that privilege!"

“We MUST win!" she said. “We cannot let systematic racism persist.”

A black man dancing in the street of a Northern California city was pinned to the ground and placed under arrest by police after officers were called to the scene, newly-released officer bodycam video shows.

The incident in Alameda has prompted the city’s police chief to request an independent investigation into the officers’ actions.

What happened: The May 23 arrest occurred after police received a call from a woman who said “an African-American man is dancing in the street and clearly something is wrong with him.”

A series of bodycam videos released on Saturday shows police officers approach the man, identified as Mali Watkins, as he stood next to a sidewalk in a street.

Man is pushed to the ground: Officers question the man, who says he had been dancing as a form of exercise, and as he tries to walk away, police grab his wrists, push him to the ground and handcuff him. He implores a witness, a woman across the street, to record the incident. He repeatedly asks police why ​they are touching him and refusing to let him go. Police tell him he is resisting arrest.

"Resisting arrest": City of Alameda spokesperson Sarah Henry said Watkins, who is a city resident, was arrested and cited for resisting arrest. She would not say if the officers have been placed on leave or faced any disciplinary action, citing department policy not to release such information.

Watkins could not be reached for comment. The Alameda District Attorney’s Office did not immediately respond to a CNN request for comment.

The arrest was condemned by the city’s vice mayor, who called for an independent investigation into the incident.

“I am outraged and I am sad and I am committed to ensuring that there is a full, independent investigation and that there is accountability for those involved, including those who created a system that allowed this to happen,” Alameda Vice Mayor John Knox White said in a statement.

Washington state Gov. Jay Inslee said he wants police across the state to restrict the use of chokeholds in restraining suspects, following large protests in the wake of the death of George Floyd.

“We need to rethink the use of police force, and look more broadly at police tactics,” Inslee said at a news conference Monday.

Inslee said the Washington State Patrol already tightly regulates the use of chokeholds that restrict a person’s airflow, with limited exceptions when an officer’s life is in danger. He added that he wants all law enforcement agencies to adopt similar rules.

“Possibly there are things where life itself is in danger ... but police are going to have to convince us that that’s the situation,” Inslee said.

The governor is calling for independent state investigations of all police misconduct allegations that involve a person being seriously hurt or killed. He also proposes reform allowing police who fail to report misconduct by other officers to be held personally responsible.

At the same time, Inslee said he is not in favor of proposals to dramatically cut law enforcement budgets.

“If some woman’s being domestically abused, they want to get that call answered pronto so that, that can be a police response,” he said. “We don’t want to lose that response.”

Attorney General William Barr said that he understands why some view George Floyd’s death as “manifestations of institutional racism in police departments,” but argued that there’s been great reform already over the past half-century, and that the actions of a few bad officers doesn’t mean there is a systemic problem.

“Every organization has individuals who engage in misconduct and we have to be very careful before we say the whole organization is rotten,” Barr said.

Barr wouldn’t comment on the police reform proposal introduced by congressional Democrats on Monday, saying that he hasn’t reviewed it yet, but said that the Trump administration’s own policing commission would be releasing its own reform proposals “very shortly.” He said he thought there will need to be “strong federal participation” in the broader reform effort to “help set standards.”

The attorney general said that chokeholds should be banned as a police tactic except in cases when police officers are confronted with lethal force. That stance has been backed previously by national policing groups, and stops short of reform put in place in cities across the country in the wake of Floyd’s death, including Minneapolis, to ban the maneuver altogether.

The Los Angeles County Sheriff’s Department (LASD) issued an immediate moratorium on the use of carotid restraints on Monday.

“There will be an immediate moratorium on the use of the LASD carotid restraint in all situations which do not rise to the level of deadly force,” the department said in a statement.

According to the statement, which lists eight use of force policies the department currently uses, “all LASD personnel are prohibited from using chokeholds, strangleholds, and carotid restraints performed with legs, knees, or feet.”

Gov. Gavin Newsom on Friday directed police departments in California to stop training officers to use carotid holds, calling the technique “a strangle hold that puts people’s lives at risk.”

The brothers of George Floyd spoke today in Houston on the eve of his funeral.

They remembered him as a “gentle giant,” a “huge role model,” and “wonderful man, father, human being.”

“If he was told he would have to sacrifice his life to bring the world together, and knowing him, I know he would’ve did it,” his younger brother Rodney Floyd said.

Philonise Floyd vowed to get justice for his brother.

“We will get justice. We will get it. We will not let this door close,” Philonise Floyd said.

The police chief of Houston, Texas, said calls to “defund the police” as a way of reforming law enforcement are misguided.

Acevedo said he believes activists who are advocating defunding or dismantling police are out of touch with underserved communities who are upset by racism, but still want a safe place to live.

Acevedo said the outrage over Floyd’s death is a real turning point, and he told that to the family.

“There's a great awakening that this death has caused like I've never seen before, and George Floyd's death will end up leading to systemic change in our country,” Acevedo said. “God used him as a vessel, and they need to really believe that.”