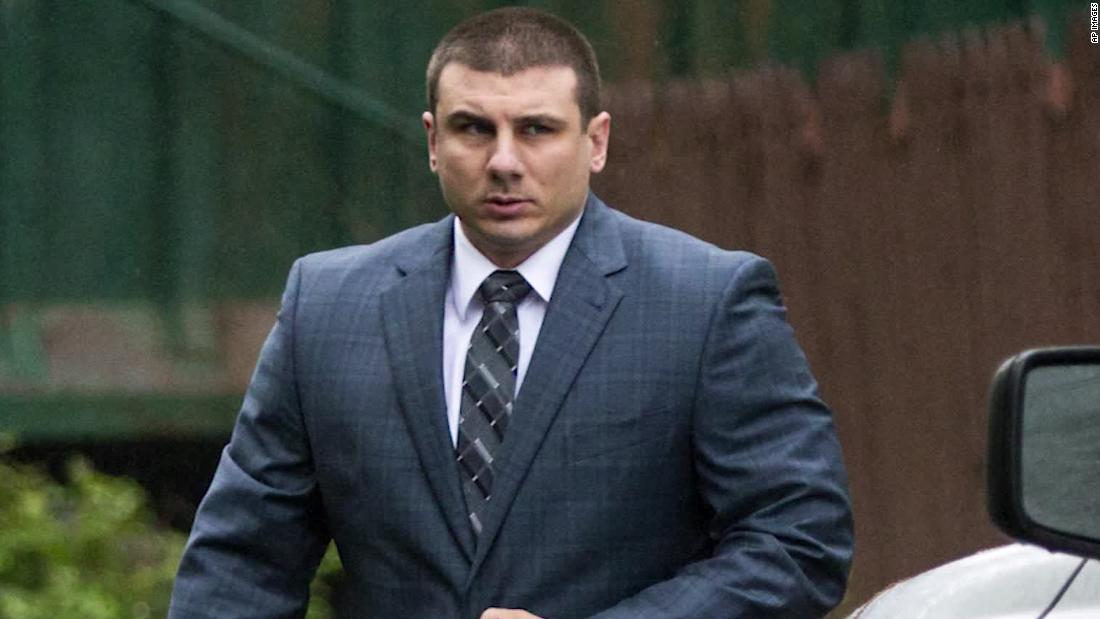 Here's what you need to know about the case:

Daniel Pantaleo is "obviously disappointed" by a judge's recommendation that he be fired following his controversial involvement in the death of Eric Garner, his attorney Stuart London said today.

"He wants to fight going forward, we will do that," London said at a news conference.

London called Pantaleo a "strong individual" who "understands the process."

London said that his firm has until Aug. 14 to submit "discrepancies" about the judge's recommendation.

"At this point we are going full steam ahead," London said, adding that he believes Pantaleo did not commit misconduct.

New York City Mayor Bill de Blasio would not say if he believes Daniel Pantaleo should be fired from the New York City Police Department.

Earlier today, a judge recommended that Pantaleo be fired following his controversial involvement in the death of Eric Garner. So far, he's been suspended from the department, but the Police Commissioner James O'Neal will make the final decision on his employment.

A reporter just asked the mayor this: "Do you agree that he should be fired?"

"Again, what I am talking about today is a fair and impartial process has occurred. That’s all I have to say," said de Blasio, who is also a 2020 Democratic presidential candidate.

Later, another reporter asked, "Mayor, do you believe that the recommendation was just?"

"I believe the process was fair and impartial," he responded.

New York City Mayor Bill de Blasio said today's decision calling for the termination of an NYPD officer, who is accused of fatally choking Eric Garner, is "a step towards justice and accountability."

"Today we finally saw a step towards justice and accountability," he said at a news conference this afternoon. "We saw a process that was actually fair and impartial and I hope that this will now bring the Garner family a sense of closure and the beginning of some peace."

De Blasio went on to say that policing in the city was reevaluated after Garner's death.

"We have waited five years and the time is now for justice," she said.

"Today’s decision confirms what we already knew but we are reinforced by the Judge’s recommendation to fire Daniel Pantaleo. He committed police misconduct causing the death of my father Eric Garner. We have waited five years and the time is now for justice. We are calling on Commissioner James O’Neal to follow the recommendation and fire Daniel Pantaleo now. We hope that the congressional hearing in the Fall that Rev. Al Sharpton and NAN have called for will further our quest for justice and be the basis for continued global scrutiny on the way my father’s case was botched."

Some background: Pantaleo is accused of killing Garner by putting him in a chokehold in 2014.

Today, a NYPD judge recommended that Pantaleo be terminated, but the final decision will be made by O'Neal. A senior law enforcement official said O'Neal is expected to follow the recommendation.

"This decision is purely political insanity. If it's allowed to stand, it will paralyze the NYPD for years to come," Lynch said in a statement.

In a statement, Walzak said this is “longstanding practice” when the recommendation is termination.

Remember: NYPD Commissioner James O’Neill will make the final decision on Pantaleo's future with the department.

Here's the full statement from Walzak:

“The Police Commissioner is aware of media reports and public statements today regarding the Pantaleo trial. Consistent with the NYPD disciplinary process, the Police Commissioner has not been provided the draft report. It has been shared with the CCRB and the defense, for a standard period of final comment from each. The Deputy Commissioner of Trials will then deliver the completed report, with those comments, to the Police Commissioner for final disposition – to be determined this month. Officer Pantaleo has been suspended, effective today, as is the longstanding practice in these matters when the recommendation is termination.
All of New York City understandably seeks closure to this difficult chapter in our City’s history. Premature statements or judgments before the process is complete however cannot and will not be made. In order to protect the integrity of the trial proceedings and conclusion, the NYPD will not comment further until the Police Commissioner makes the final determination.”

A top official from the agency that prosecuted the internal trial of the officer in the Eric Garner case said in a statement Friday that the evidence the prosecutor presented was "more than sufficient to prove that Pantaleo is unfit to serve."

“Today’s decision confirms what the Civilian Complaint Review Board always has maintained: Officer Daniel Pantaleo committed misconduct on July 17, 2014, and his actions caused the death of Eric Garner.
“The evidence the CCRB’s prosecutors brought forth at trial was more than sufficient to prove that Pantaleo is unfit to serve. Commissioner O’Neill must uphold this verdict and dismiss Pantaleo from the Department, as was recommended by both the CCRB and the Deputy Commissioner of Trials.” 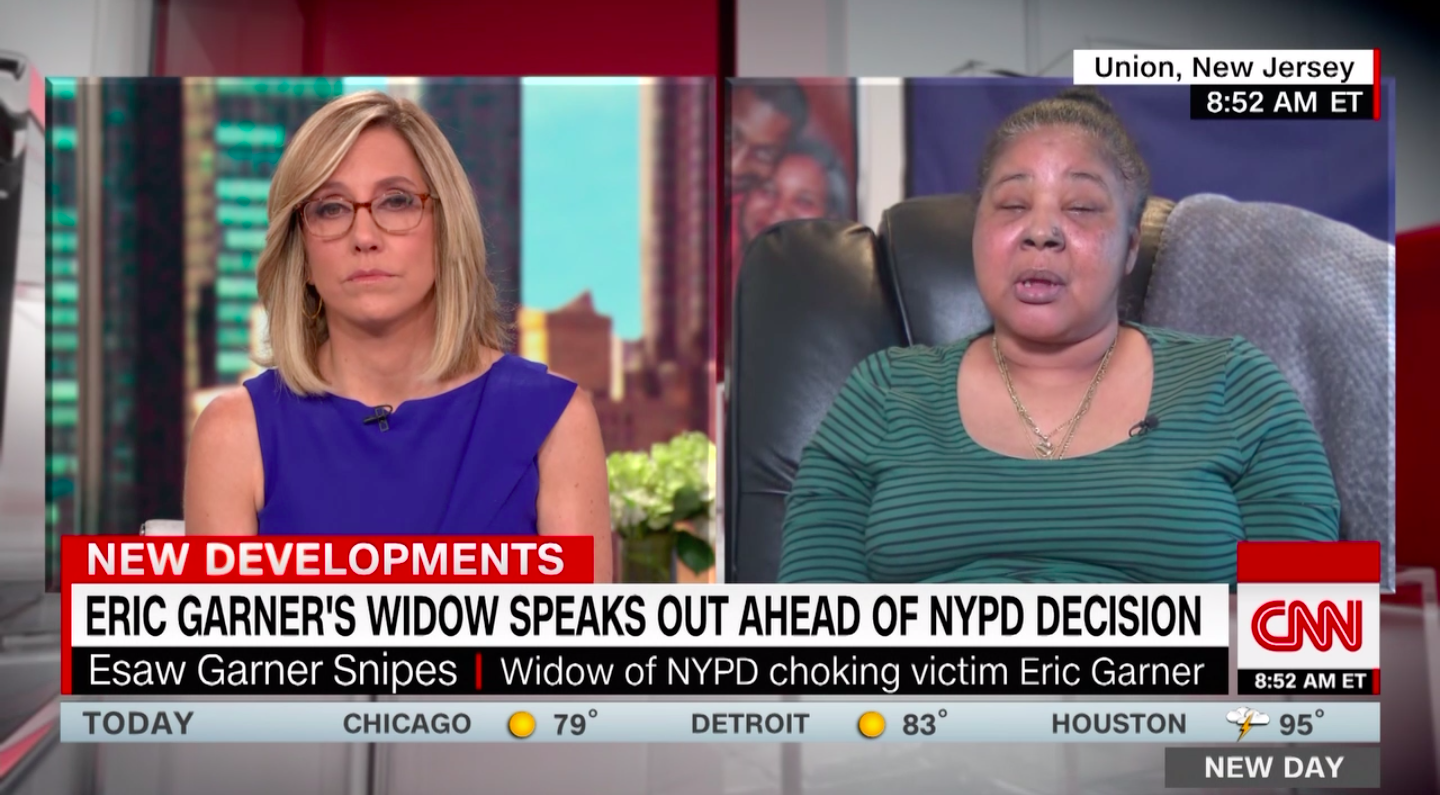 Eric Garner's widow has been calling for NYPD to fire the officer accused of fatally choking her husband since 2014, and today, an internal judge recommended action.

A New York Police Department judge recommended that Daniel Pantaleo be terminated. The police commissioner will make a final determination, according to a source.

Earlier today, before the verdict was released, Esaw Garner Snipes said she is "grateful" for the people who have been protesting her husband's death since 2014. Garner's case, and last words, "I can't breathe," became a rallying cry in the Black Lives Matter movement.

She told CNN's Alisyn Camerota on New Day that she knew there would be "civil unrest."

"I wasn't surprised at all because we said there would be civil unrest until they fire Pantaleo. They need to fire him. Eleven days, for 11 times that he screamed he can't breathe, and I'm not able physically to get out there and protest like I want to, but my children have stepped up, and they're fighting for justice," Garner Snipes said.