Derek Chauvin is on trial for George Floyd's death

Our live coverage of the trial has ended for the day. Read more about the trial here.

They detailed what they found during the course of examining George Floyd's death.

Here's what they said today in court:

Dr. Andrew Baker, the Hennepin County chief medical examiner who performed Floyd's autopsy, said he still classifies Floyd's death as a homicide, and that his opinion remains unchanged. He told the court that Floyd's heart disease and use of fentanyl were contributing factors to his death, but they were not the direct cause.

Asked about the autopsy and Floyd's death certificate, Baker described the "top line of the cause of death" as "what you think is the most important thing that precipitated the death."

"Other things that you think played a role in the death but were not direct causes get relegated to what's known as the 'other significant conditions' part of the death certificate," he said. "For example, you know, Mr. Floyd's use of fentanyl did not cause the subdual or neck restraint. His heart disease did not cause the subdual or the neck restraint."

Chauvin's defense attorney, Eric Nelson, has argued that Floyd died as a result of drugs and preexisting health conditions. And under cross examination, Baker said he believed those factors played a role. But Baker reiterated he stood by the cause of death he wrote on Floyd's death certificate and his finding that Floyd's death was a homicide, which to a medical examiner means his death was caused by another person and does not necessarily indicate guilt.

Forensic pathologist Dr. Lindsey Thomas, who has worked as a medical examiner herself, including in the Hennepin County Medical Examiner's Office, and who was part of Baker's training, agreed with Baker's finding in the cause of death, adding she believed the "primary mechanism of death is asphyxia or low oxygen."

Because of the restraint and his position, she said, Floyd was "unable to get enough oxygen in" to support his body's functions.

Thomas explained the technical wording of the medical examiner's finding in the cause of death, saying, "What it means to me is that the activities of the law enforcement officers resulted in Mr. Floyd's death. And that specifically those activities were the subdual, the restraint and the neck compression."

"There's no evidence," she later added, "to suggest he would have died that night except for the interactions with law enforcement."

Court is adjourned until Monday morning when testimony is expected to resume in the trial of former Minneapolis Police officer Derek Chauvin.

The medical examiner who ruled George Floyd’s death a homicide last year says due to the 46-year-old's underlying health conditions, his body was simply not able to survive being subdued by police.

“He has a heart that already needs more oxygen than a normal heart by virtue of its size and its limited in its ability to step up to provide more oxygen when there's demand because of the narrowing of his coronary arteries,” Dr. Andrew Baker, Hennepin County's chief medical examiner, told prosecutor Jerry Blackwell. “The law enforcement subdue will restrain to the neck compression was just more than Mr. Floyd could take by virtue of that those heart conditions.”

Baker explained to the jury in the trial of Derek Chauvin how he examined Floyd’s body to identify any injuries and found cuts and bruises on Floyd’s face and hands from the interaction with police.

“These are blunt force injuries, these are abrasions and lacerations, again, that's damage to the skin from blunt trauma. These would be entirely consistent with him, having been in an altercation with another person,” Baker testified.

He looked under the skin on Floyd’s back to see if there were any signs of bruising and found none. “Sometimes, fresh bruises can be difficult to see in some people, so we look underneath the skin to make sure we have a missed something,” he testified.

Baker did not photograph Floyd’s heart since it appeared normal, though the weight was slightly larger due to high blood pressure, he said.

“The weight of the heart is a very good predictor as to whether that heart is normal or not, people who have high blood pressure for a long period of time, their heart will actually get heavier, just like any muscle that’s worked hard. The heart will grow in response to that kind of stress,” Baker testified.

Floyd’s arteries were dissected looking for narrowing or blockages and significant hardening was found. “You should be seeing through a round hole in each of those but they're pretty severely narrowed,” Baker told the jury as they looked at photos of the dissected blood vessels.

He said there was no sign of clots in his coronary artery and no damage to the heart muscle itself. 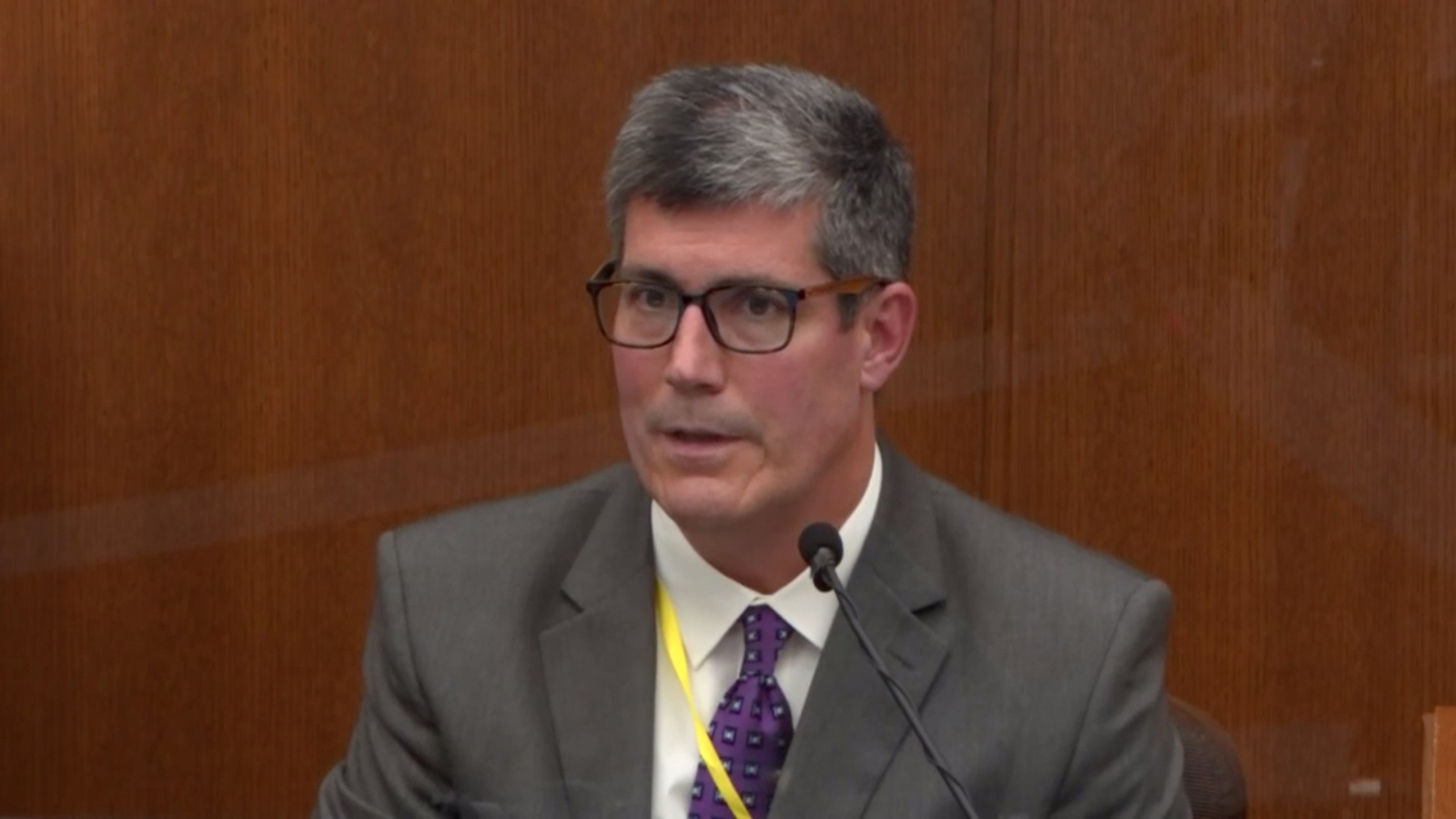 Dr. Andrew Baker, the Hennepin County chief medical examiner who performed George Floyd's autopsy, said he still classifies Floyd's death as a homicide which, in the medical world, is not an assignment of guilt or malicious intent necessarily.

"My opinion remains unchanged. It's what I put on the death certificate last June. That's cardiopulmonary arrest, complicating law enforcement subdual, restraint and neck compression. That was my top line then and it would stay my top line now," Baker said during the trial of former officer Derek Chauvin today.

In regards to any underlying medical conditions Floyd may have suffered from or what may have been in his system in May 2020, Baker said "they are not direct causes of Mr. Floyd's death."

"They're contributing causes," he added. "I would still classify it as a homicide today."

The underlying heart disease George Floyd suffered from "contributed" but was not "the direct cause" of his death, Dr. Andrew Baker, the Hennepin County Chief Medical Examiner who performed Floyd's autopsy, testified in court today.

"I don't know that we specifically got to it, counselor, but Mr. Floyd also had what we call hypertensive heart disease, meaning his heart weighed more than it should," Baker said to prosecuting attorney Jerry Blackwell. "He has a heart that already needs more oxygen than a normal heart by virtue of its size, and it's limited in its ability to step up to provide more oxygen when there's demand because of the narrowing of his coronary arteries."

Baker went on to explain what Floyd's heart was likely put through in May 2020 during the incident with police.

"Now, in the context of an altercation with other people that involves things like physical restraint, that involves things like being held to the ground, that involves things like the pain you would incur from having your cheek up against the asphalt and abrasion on your shoulder, those events are going to cause stress hormones to pour out into your body like adrenaline," Baker added. "The adrenaline will ask your heart to beat faster, it will ask your body for more oxygen so that you can get through that altercation. And, in my opinion, the law enforcement subdual restraint and neck compression was just more than Mr. Floyd could take by virtue of those heart conditions."

Dr. Andrew Baker, the Hennepin County Chief Medical Examiner who performed George Floyd's autopsy, told the court he has "no reason to believe" Floyd's tumor – a paraganglioma – discovered in his pelvis had anything to do with his  death.

"Short answer is, I don't feel Mr. Floyd's paraganglioma had anything to do with his death," Baker said.

"What we're talking about is an incidental tumor I happened to find in his pelvis during the autopsy. I did look at it under the microscope. The likely diagnosis is a paraganglioma but I have no reason to believe that had anything to do with Mr. Floyd's death," he continued.

"Sickle cell trait is carried by about 8% of Americans of African heritage. What it means is that one of the genes that codes for the beta chain of hemoglobin has an abnormal substitution in it. If you just have sickle cell trait, chances are you will go through life and never have any symptoms from it because you make plenty of normal hemoglobin," Baker told the court.

"So, it's really just a fluke that it got picked up at autopsy. In my opinion, it doesn't have anything to do with why he died," he added.

Baker ruled Floyd's death last May was a homicide, identifying the cause as "cardiopulmonary arrest" that occurred during "law enforcement subdual, restraint, and neck compression."

Dr. Andrew Baker, the Hennepin County chief medical examiner, testified today that George Floyd's autopsy revealed that he did not have have any prior heart damage before the incident in May 2020.

"Mr. Floyd had no visible or microscopic previous damage to his heart muscle," Baker said.

Earlier today: Dr. Lindsey Thomas, a forensic pathologist, said the "subdual, restraint and compression" of law enforcement of Floyd was "ultimately" the immediate cause of death.

Asked by the prosecution to explain what the terms "subdual restraint and neck compression" mean, Thomas said:

"Those were activities by the law enforcement agency officers involved. Subdual is subduing someone, trying to restrain them. In Mr. Floyd's case, involved handcuffing him, his positioning on the ground, the prone position. The people kneeling on him. And the net compression is the knee on the neck specifically. Additionally, there was some back and other things being compressed by the officers."

Dr. Andrew Baker, the Hennepin County Chief Medical Examiner, testified today that George Floyd's autopsy revealed that he had suffered "several injuries to his face" in May 2020.

"And these were specifically taken to illustrate the injuries you see on the corner of his left eyebrow and on his left cheek," Baker said in response to being shown autopsy photos today in court of Floyd's body. "You can see the bruising and the abrasion. That's fancy medical lingo for the big scrape on the left side of his forehead. You can see the scrape or the abrasion on the left side of his cheek. It's a very common for abrasions post-mortem to take on the dark black color. After death, the moisture in the abrasion on you or me isn't there any more and they tend to dry out and look more like what you see in the photo."

Baker added: "These would be entirely consistent with the left side of his face being pinned against the asphalt or road surface he was on the night before."

Hennepin County Chief Medical Examiner Dr. Andrew Baker, who performed George Floyd's autopsy, told the prosecuting attorney that he did not view videos of Floyd's death before examining the body.

"I was aware at least one video had gone viral on the internet. But I intentionally chose not to look at that until I had examined Mr. Floyd. I did not want to bias my exam by going in with preconceived notions that might lead me down one pathway or another," Baker said.

Baker ruled Floyd's death last May was a homicide, identifying the cause as "cardiopulmonary arrest" that occurred during "law enforcement subdual, restraint, and neck compression."

The medical examiner saw the videos upon completing the autopsy.

"One video I saw shortly after the autopsy, that was the one most of the public had seen through Facebook or other social media, the other videos such as the cub surveillance video and the body worn camera videos, I did not see until three or four days after the autopsy," Baker said.