Derek Chauvin is on trial for George Floyd's death

Our live coverage of the trial has ended for the day. Read more about the trial here.

The high-ranking officers described what they saw on May 25, 2020, at the scene after George Floyd died. Trial proceedings ended early Friday, but will resume Monday morning.

Here's what happened today in court:

What else happened this week: Jurors heard testimony from bystanders described the moment they witnessed Chauvin kneel on Floyd's neck. Here's a recap of their statements:

Proceedings in the trial of former Minneapolis police officer Derek Chauvin have wrapped for the day.

The most senior officer on the Minneapolis police department testified Thursday that actions like those used on George Floyd are not part of police department training, saying “if your knee is on a person’s neck, that could kill them.”

Lt. Richard Zimmerman, who supervises the Minneapolis Police Department homicide unit, testified that actions like those used on Floyd are not part of police department training.

Former Minneapolis Police officer Derek Chauvin put his knee on Floyd’s neck while he lay handcuffed outside of Cup Foods as Floyd told Chauvin and three other officers that he could not breathe.

Zimmerman is the longest serving officer in the department, he told prosecutor Matthew Frank, and has been trained every year in the use of force.

He said he has never been trained by the Minneapolis Police Department to kneel on the back of a suspect.

“That would be the top tier, the deadly force,” Zimmerman told prosecutor Matthew Frank.

There is a continuum of force that officers can use depending on the situation, that ranges from simply being on scene, to verbal skills, a “soft” technique like escorting a person by their arm, or hard techniques like handcuffs, all the way up to deadly force.

Once a person is in custody, their safety and well-being are the officers’ responsibility.

“Once you secure a person you need to get them out of the prone position as soon as possible because it restricts their breathing,” Zimmerman told the court. “Once a person is cuffed, you need to turn them on their side or have them sit up.”

Suspects are a much smaller threat to officers after they are in handcuffs.

“Once a person is cuffed, the threat level goes down all the way. They are cuffed, how can they really hurt you,” he said. “You getting injured is way down. You could have some guy try to kick you or something, but you can move out of the way. That person is handcuffed, you know, so the threat level is just not there.”

When someone stops resisting, officers should work to calm them down.

“If they become less combative, you may just have them sit down on a curb. The idea is to calm the person down and if they are not a threat to you at that point, you try to help them so that they are not as upset as they may have been in the beginning,” Zimmerman testified.

On the night Floyd died, Zimmerman arrived at the corner where Cup Foods is located around 10 p.m. and walked up to officers J. Alexander Kueng and Thomas Lane, body camera video showed.

Zimmerman determined they were “involved officers” and needed to go to city hall to be interviewed, he said.

Other officers were needed at the scene, so he testified he called in an on-call homicide team.

The state Bureau of Criminal Apprehension (BCA) took over the case when the hospital determined Floyd had died, Zimmerman explained to the court.

Lt. Richard Zimmerman, head of the Minneapolis Police's homicide unit, said the use of force by former officer Derek Chauvin against George Floyd was “totally unnecessary.”

“Pulling him down to the ground face down, and putting your knee on a neck for that amount of time is just uncalled for. I saw no reason why the officers felt they were in danger — if that's what they felt — and that's what they would have to feel to be able to use that kind of force,” Zimmerman said.

Zimmerman said the restraint should have “absolutely” stopped once Floyd was handcuffed and on the ground.

The trial of former police officer Derek Chauvin is back in session after a quick recess and witness testimony continues.

Earlier this morning, two Minneapolis police officers took the stand in the fifth day of testimony.

Remember: Today will be a shorter day than the first four days of testimony. The jury will be dismissed around 1 p.m. ET (noon local).

Judge Peter Cahill noted Thursday that the trial is ahead of schedule and there were some legal matters that needed to be addressed. It’s not clear if those legal issues will be discussed in open court after the jury leaves, or behind the scenes.

Minneapolis Police Lt. Richard Zimmerman took the stand in the trial of former officer Derek Chauvin, and he is being questioned by the prosecution.

He said he has been a police officer in Minneapolis since 1985 and currently works in the homicide unit. 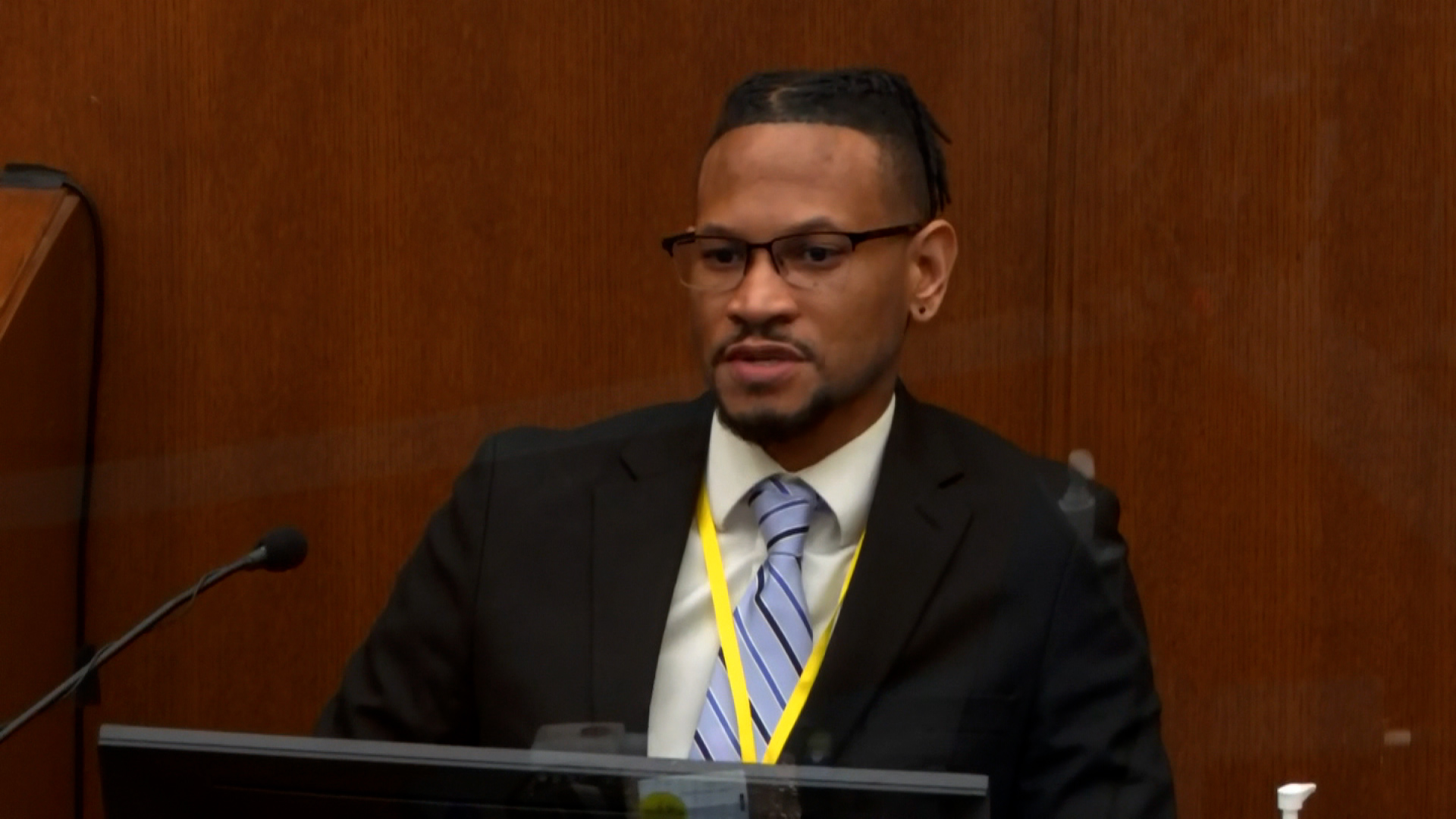 Jon Curtis Edwards, a sergeant with the Minneapolis Police, just took the stand in the trial of former officer Derek Chauvin, who is charged in the death of George Floyd.

He's been with the department since 2007, he testified. The prosecution is asking him details about the crime scene and reviewing footage from his body camera.

Edwards was an overnight sergeant working at the department’s third precinct the night Floyd died.

Edwards worked the shift after Sgt. David Pleoger, who testified Thursday that the force being used by Chauvin on Floyd should have stopped earlier.

Edwards told the court Pleoger called him and asked him to report to the scene of Floyd’s arrest at Cup Foods. The sergeant said he went to the location of the incident to "secure that area" and make contact with any "officers that were there on the scene still."

Edwards said that he arrived to scene — 38th and Chicago — around 9:35 p.m. ET and only saw two officers there: J. Alexander Kueng and Thomas Lane in their police car. "There weren't many other people around when I arrived there," he noted.

Edwards said he had his body camera activated when he arrived, but neither officer had their body camera on when he met them. He asked both of them to activate them.

The officers told Edwards where the incident with Floyd took place, and he instructed them to place crime scene tape around the area "so that we could preserve any potential evidence that was there."

Other officers arrived, Edwards instructed them to guard the scene and look for witnesses.

He secured Kueng and Lane’s police car as well as the vehicle Floyd was driving until investigators came and towed them away.

Inside Cup Foods, Edwards spoke with the manager, he testified.

Two homicide officers arrived at the scene, including Sgt. Robert Dale and Lt. Richard Zimmerman, who took command of the scene and asked for more officers and a crime scene log. Dale later told Edwards that Floyd had died, he testified.

Lane and Kueng were separately taken to city hall to be questioned.

Special Agent Michael Phill with the Minnesota Bureau of Criminal Apprehension (BCA) arrived and took over the scene around 11 p.m., Edwards testified.

After the BCA completed their investigation, Edwards helped take down the police tape and left the scene.

The defense did not cross examine Edwards.

We're expecting to hear from more witnesses today, but it will be a shorter day than the first four. The jury will be dismissed around 1 p.m. ET (noon local).

Judge Peter Cahill noted Thursday that the trial is ahead of schedule and there were some legal matters that needed to be addressed. It’s not clear if those legal issues will be discussed in open court after the jury leaves, or behind the scenes.

More on the trial: Chauvin put his knee on George Floyd’s neck on May 25, 2020 as Floyd told Chauvin and three other officers that he could not breathe.

Witness testimony will continue soon in the trial of former Minneapolis Police officer Derek Chauvin, who's been charged in the death of George Floyd.

Floyd, a 46-year-old Black man, died in May 2020 after Chauvin placed his knee on Floyd's neck while he pleaded, "I can't breathe."

Hearing witnesses testify and dissect second-by-second accounts of the circumstances surrounding Floyd's death can be tough.

Here are some resources that may help:

You can contact any of the organizations above to find peer groups and other group counseling services. These organizations often have affiliates in cities that host group meetings. They offer coping mechanisms to deal with stress, depression, anxiety and other mental health conditions.

It's always important to speak to someone and not feel that you're facing this alone.

You can find more CNN resources that may help here.