Our live coverage has ended. Read more about his sentencing here.

President Biden reacted Friday to the sentencing verdict in the murder trial of former Minneapolis police officer Derek Chauvin, telling reporters in the Oval Office, “I don’t know all the circumstances that were considered, but it seems to me, under the guidelines, that seems to be appropriate.”

Chauvin was sentenced earlier Friday to 22 and a half years for the second-degree unintentional murder of George Floyd. Sentences for the lesser convictions of second-degree manslaughter and third-degree murder were not adjudicated.

Biden, when asked to react to the sentence, told reporters in the Oval Office, “I’ve not been able to hear anything about what’s happened,” prompting a reporter to inform him of Chauvin’s sentence.

Attorney Ben Crump, who represents George Floyd's family, said the prison sentence for Derek Chauvin should "not be the exception when a Black person is killed by brutality by police."

"Today represents an opportunity to be a turning point in America. This is the longest sentence that a police officer has ever been sentenced to in the history of the state of Minnesota," Crump said in a speech following Chauvin's sentencing in Minneapolis. "But this should not be the exception when a Black person is killed by brutality by police. It should be the norm. And so when we think about real justice, real justice would be George Floyd still being here with his family."

Rev. Al Sharpton was critical of the 22.5 year jail sentence imposed on Derek Chauvin this afternoon, saying the former police officer should have received the maximum sentence.

"This verdict and this sentencing is the longest sentence we've seen, but it is not justice because George Floyd is in a grave tonight even though Chauvin will be in jail," Sharpton said during a speech in Minneapolis. "So let us not feel that we're here to celebrate because justice would've been George Floyd never had been killed. Justice would've been the maximum."

Sharpton added: "We got more than we thought only because we have been disappointed so many times before,  22 and a half years is longer than we've ever got. But shorter than what we should've gotten in the past."

Minnesota Attorney General Keith Ellison placed the sentencing of Derek Chauvin this afternoon in perspective, saying he hopes "this moment gives us pause and allows us to rededicate ourselves to the real societal change that will move us much further along the road to justice."

"My hope is that he takes the time to learn something about the man whose life he took and about the movement that rolls up to call for justice in the wake of George Floyd's torture and death. Today is also an important moment for our country. The outcome of this case is critically important. But by itself, it's not enough. My hope for our country is that this moment gives us pause and allows us to rededicate ourselves to the real societal change that will move us much further along the road to justice."

Ellison went on to call for the passage of The George Floyd Justice and Policing Act, which remains stalled in Congress.

"I call on leaders and members of Congress to pass the best and strongest version of this bill that can be passed and to pass it now. President Biden called on the Congress to pass this bill. It must be passed. Lives are depending upon it. It's just that simple," he said.

“This historic sentence brings the Floyd family and our nation one step closer to healing by delivering closure and accountability. For once, a police officer who wrongly took the life of a Black man was held to account,” Crump and the Floyd family said in Friday’s statement.

“Day after day, year after year, police kill Black people without consequence. But today, with Chauvin’s sentence, we take a significant step forward – something that was unimaginable a very short time ago,” the statement continued.

Bridgett Floyd, George Floyd's sister and founder of the George Floyd Memorial Foundation, issued a statement moments after Derek Chauvin was sentenced to 22 and a half years in prison for Floyd’s murder Friday afternoon.

"The sentence handed down today to the Minneapolis police officer who killed my brother George Floyd shows that matters of police brutality are finally being taken seriously," the statement said. "However, we have a long way to go and many changes to make before Black and Brown people finally feel like they are being treated fairly and humanely by law enforcement in this country."

"Our focus at the George Floyd Memorial Foundation will now move to building support to ensure that the George Floyd Justice in Policing Act becomes law and brings with it the hope for the substantive change that we need so desperately in this country," the statement continued. 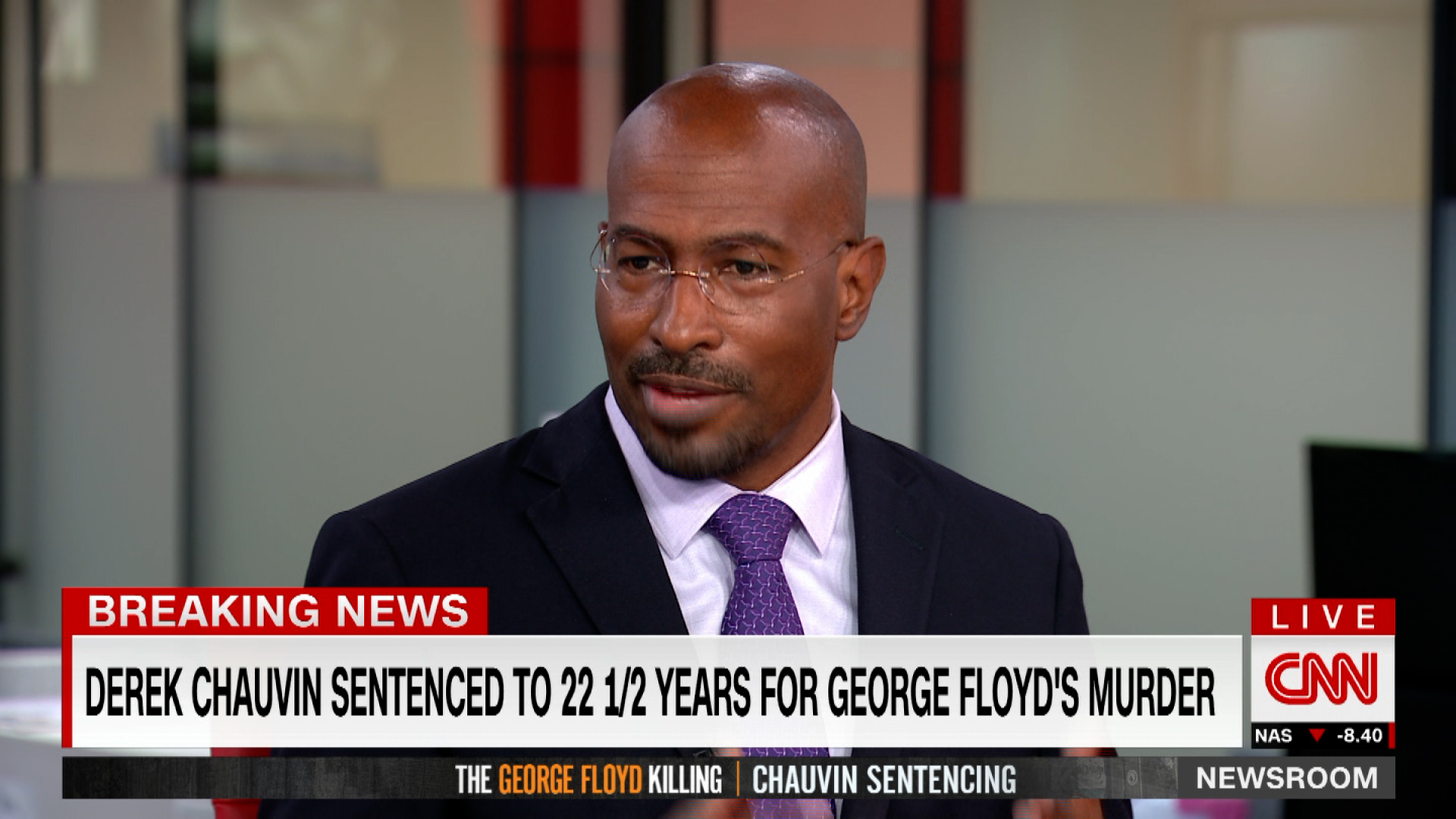 CNN political commentator Van Jones reacted moments after the judged sentenced Derek Chauvin to 22 1/2 years in prison, calling the sentence "very disappointing" and saying the judge should have handed down the maximum possible penalty for the murder of George Floyd.

"I know people doing 15 years for nothing, for victimless crimes of drug possession," said Jones, referring to the minimum time Chauvin is likely to serve in the case. "Very disappointing."

Jones pointed to aggravating factors the judge had identified in the case, saying they should have resulted in harsher sentence both as a punitive measure for Chauvin, but also as a warning to other law enforcement officials.

"Any one of those aggravators, what this man did, it should've been the maximum of the maximum," said Jones. "It's a punch in the gut."

"Law enforcement across the country should look at something like this and say, look, you can't do this type of stuff, you're never going to come back home," Jones said. "It's disappointing."

Former Minneapolis Police officer Derek Chauvin has been sentenced to 22 and a half years in prison in the 2020 murder of George Floyd.

However, Chauvin has no prior criminal record. State guidelines say that for such a person, the presumptive sentence for both second-degree and third-degree murder is 12 1/2 years. The judge was given discretion to hand down a sentence between 10 years and eight months and 15 years for each.

Second-degree manslaughter carries a presumptive sentence of four years for someone with no record, according to the guidelines. The judge's discretion ranged from three years and five months to four years and eight months.

Hennepin County District Court Judge Peter Cahill expressed his condolences for the family of George Floyd moments before handing down his sentence for Derek Chauvin.

He said the sentence was "not based on emotion or sympathy."

"But at the same time I want to acknowledge the deep and tremendous pain that all the families are feeling, especially the Floyd family. You have our sympathies," Cahill said. "It has been painful throughout Hennepin County, throughout the state of Minnesota, and even the country. But most importantly we need to recognize the pain of the Floyd family."