In both cities, the President visited hospitals and met with victims' families, first responders and doctors.

We're wrapping up our live coverage, but here's what you need to know about the President's visits:

Taylor Gould, a friend and former classmate of Megan Betts, said Dayton shooter Connor Betts tried to choke her and put his hands around her neck, when she tried to intervene on Megan’s behalf during a sleepover at the Betts’ home,

“He choked me out for standing up [to] him,” she told the CNN.

The choking incident, which was first reported by the Cincinnati Enquirer, happened when Gould was in middle school, and Connor was a high school freshman.

She said Connor only let her go after his mother began crying and begging him to stop.

The El Paso shooting suspect’s mother called the Allen Police Department weeks before the shooting because she was concerned about her son owning an “AK” type firearm, lawyers for the family confirmed to CNN.

The mother contacted police because she was worried about her son owning the weapon given his age, maturity level and lack of experience handling such a firearm, attorneys Chris Ayres and R. Jack Ayres said.

During the call, the mother was transferred to a public safety officer who told her that —based on her description of the situation — her son, 21, was legally allowed to purchase the weapon, the attorneys said. The mother did not provide her name or her son’s name, and police did not seek any additional information from her before the call concluded, they added.

It is not known whether the gun the mother inquired about is the weapon used in the attack.

In response to public records requests for information on alleged shooter Patrick Crusius, the Allen Police Department provided no reports documenting the call from the mother.

The police said in a statement only three minor incidents — one, a false burglar alarm at the family home, another when Crusius was a passenger in a bus involved in a minor traffic accident and a third when he ran away from home but returned 30 minutes later — “are the entirety of our dealings with Mr. Crusius, in any capacity, be it suspect, witness, reporting party, or in any other manner.”

According to the family’s attorneys, the mother’s inquiry was “informational” in nature and was not motivated out of a concern that her son posed a threat to anybody.

“This was not a volatile, explosive, erratic behaving kid,” Chris Ayres said. “It’s not like alarm bells were going off.”

Some background: Crusius is accused of opening fire at an El Paso Walmart Saturday killing 22 people and injuring more than two dozen others. Before the shooing, he posted a manifesto online proclaiming white nationalist and racist views against Hispanics and immigrants.

He has been charged with capital murder and is being held without bond. District Attorney Jaime Esparza said his office will seek the death penalty.

Dayton Mayor Nan Whaley reacted tonight to President Trump who accused her and Ohio Sen. Sherrod Brown of misrepresenting the reception Trump received from shooting victims during his visit to a hospital today.

"Look, I mean, I think I've known and watched President Trump's Twitter feed for awhile. He is a bully and coward and it's fine that he wants to bully me and Senator Brown. We're okay. We can take it, but the citizens of Dayton deserve action. And we're hoping that, you know, this isn't a typical politician that's all talk and no action. We want to see and the citizens of Dayton want to see him do something around common sense gun legislation," she said.

Some background: At a news conference following their hospital visit with Trump, Brown said Trump was "received well by the patients," was "comforting" and "did the right things." At the press conference and in an interview with CNN, Whaley said victims were "grateful" to see Trump and that he was "treated well by the victims, for sure."

Brown did call Trump and his past rhetoric "racist." Whaley called Trump's past rhetoric "divisive" and said it was good he did not visit the district where the shooting occurred because of local "anger" about him.

But neither of the two Democrats alleged that Trump was badly received at the hospital.

When Whaley was later shown the Trump tweet in which he accused her of "totally misrepresenting what took place inside of the hospital," she responded, "I'm really confused."

He visited both El Paso and Dayton, Ohio, today. Dayton was the scene of Sunday's mass shooting.

In El Paso, Trump visited a hospital and the city's Emergency Operations Center. Protesters and supporters were gathered today at a memorial site and outside the hospital.

Trump met victims' families at the University Medical Center of El Paso and visited the city's Emergency Operations Center today in the wake of a mass shooting that left 22 people dead at a Walmart.

Ben Dominguez, who is a human services investigator, said people need to focus on the good things the President has done during the trip.

"Even though I don't agree with some of President's rhetoric, I think it's important to show that he respects what has happened," Dominguez said. "He's paid his respects to the families. We need to get focused on that."

German Gomez, who owns a car dealership, said he wasn't for or against Trump, "but you do need to respect him because he's our President."

He continued that when it comes to gun violence, he believes it's about the person, not the firearm.

"People are easy to blame the guns. I'm a gun owner and I know it's the person that owns the gun, not the firearms," Gomez said. "We have a divided crowd, but it's our right to own guns." 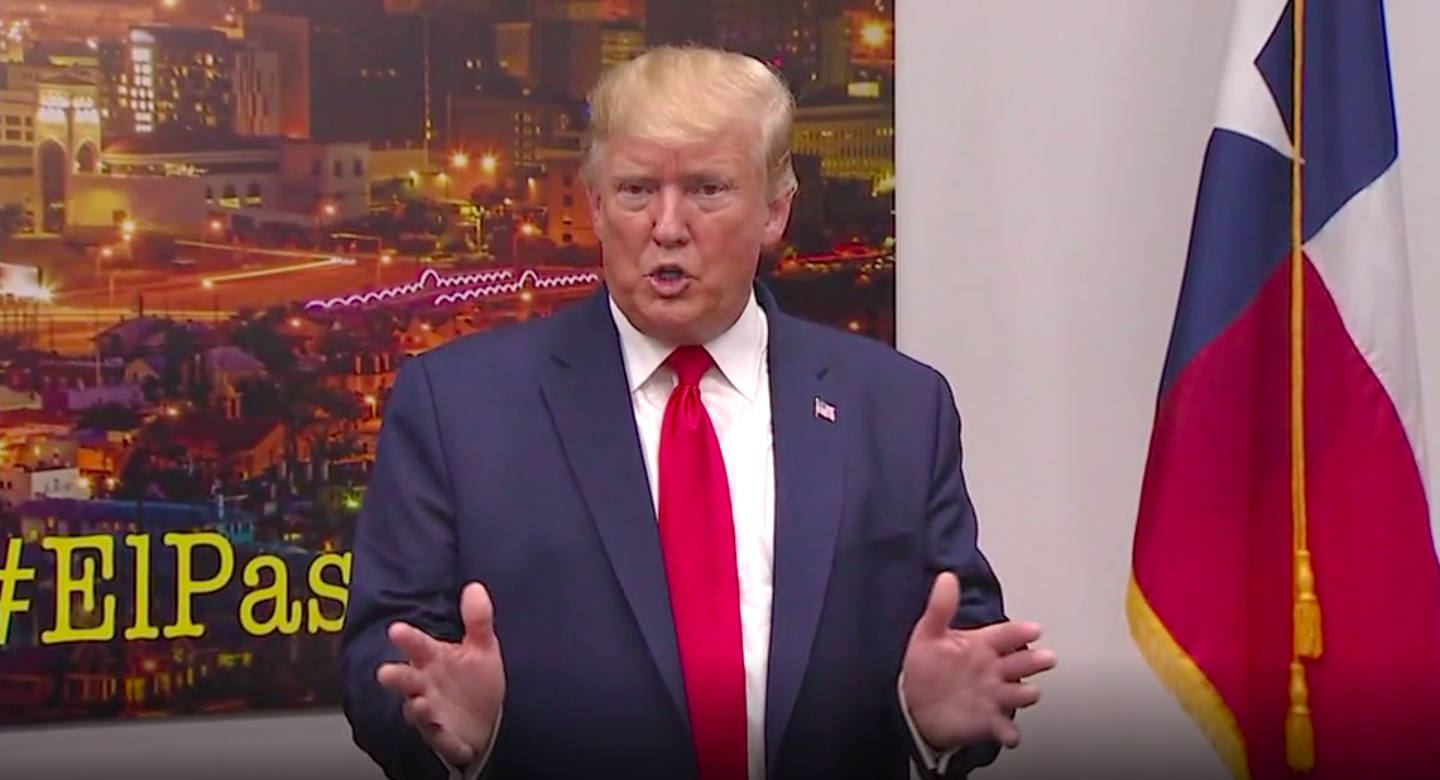 However, he quickly changed his tone and began to criticize Nan Whaley, the Democratic mayor of Dayton, Ohio, and the state's Democratic Sen. Sherrod Brown.

"They shouldn’t be politicking today. I had it with Sherrod Brown. He and the mayor Nan Whaley they asked to go in, 'Could we possibly go in and make the tour with you.' I said, 'Yeah, let’s do it.' They couldn’t believe what they saw. And they said it to people. They’ve never seen anything like it. The entire hospital, no different than what we had in El Paso, the entire hospital, was, I mean everybody was so proud of the job they did. Because they did a great job," Trump said.

He then called them very dishonest, saying, "I get on Air Force One where they do have a lot of televisions, I turn on the television and there they are saying, 'Well, I don’t know if it was appropriate for the President to be here.'"

Some background: Earlier today, Trump, his press secretary and his director of social media accused Brown and Whaley of misrepresenting the reception the President received from shooting victims during his visit to a Dayton hospital.

Facts First: This is false. While both Brown and Whaley criticized Trump's past rhetoric, they were only complimentary about his visit to the hospital.

At a press conference following their joint hospital visit with Trump, Brown said Trump was "received well by the patients," was "comforting" and "did the right things." At the press conference and in an interview with CNN, Whaley said victims were "grateful" to see Trump and that he was "treated well by the victims, for sure."

Brown did call Trump and his past rhetoric "racist." Whaley called Trump's past rhetoric "divisive" and said it was good he did not visit the district where the shooting occurred because of local "anger" about him.

But neither of the two Democrats alleged that Trump was badly received at the hospital. 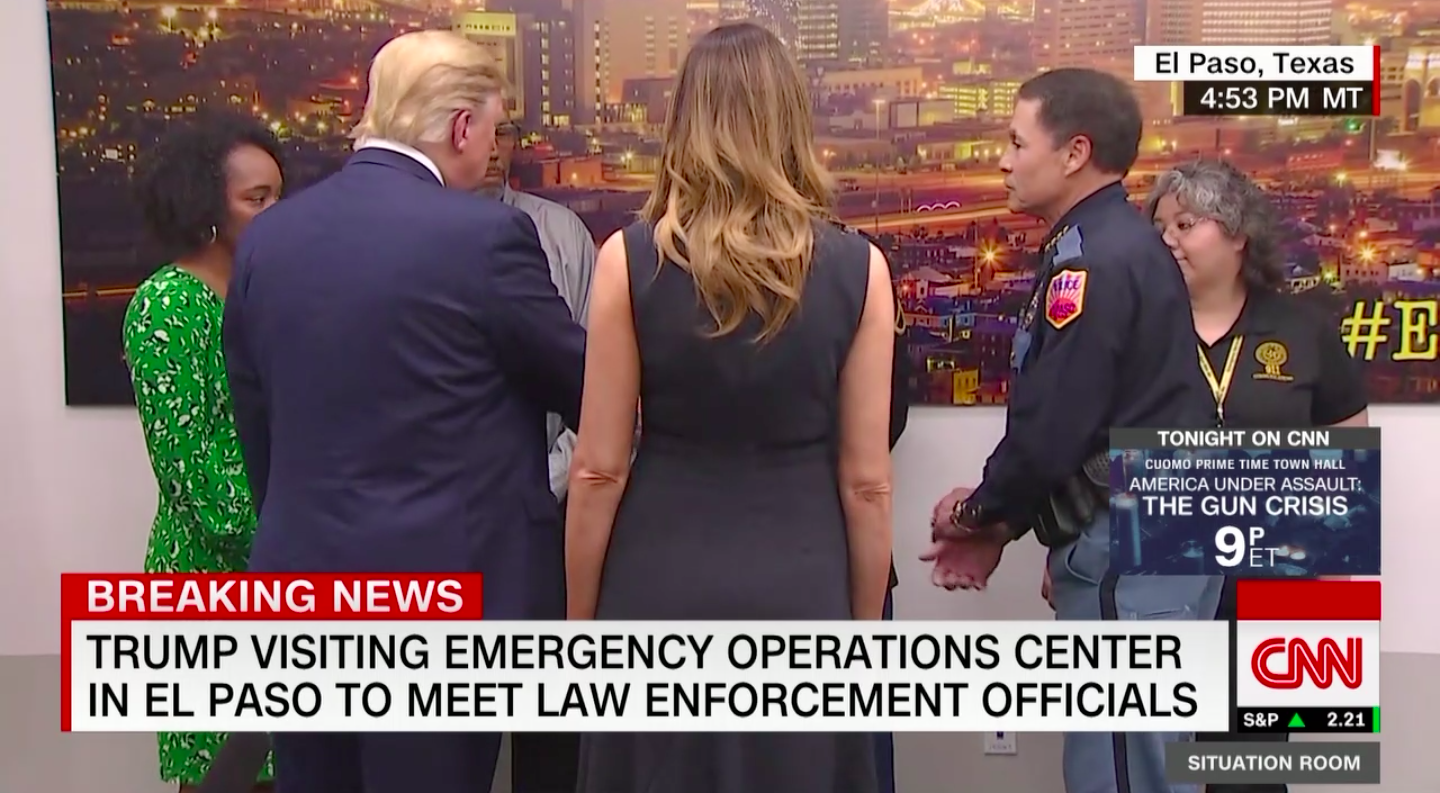 Mark Morgan, acting commissioner for US Customs and Border Protection, and John Bash, US attorney for the Western District of Texas, are also joining the President.

An Ohio football team is donating $75,000 to help families who were affected by the mass shooting in Dayton over the weekend.

The Cincinnati Bengals are partnering with the National Football League Foundation. The money will be donated to the Dayton Oregon District Tragedy Fund, through the Dayton Foundation.

The Dayton Foundation will then work with local officials to allocate the money to families.

"Dayton is part of our community and we are saddened by the tragic events that took place this weekend," Katie Blackburn, the team's executive vice president, said in a statement.