"Very powerful moments for all!" Grisham said in a tweet. 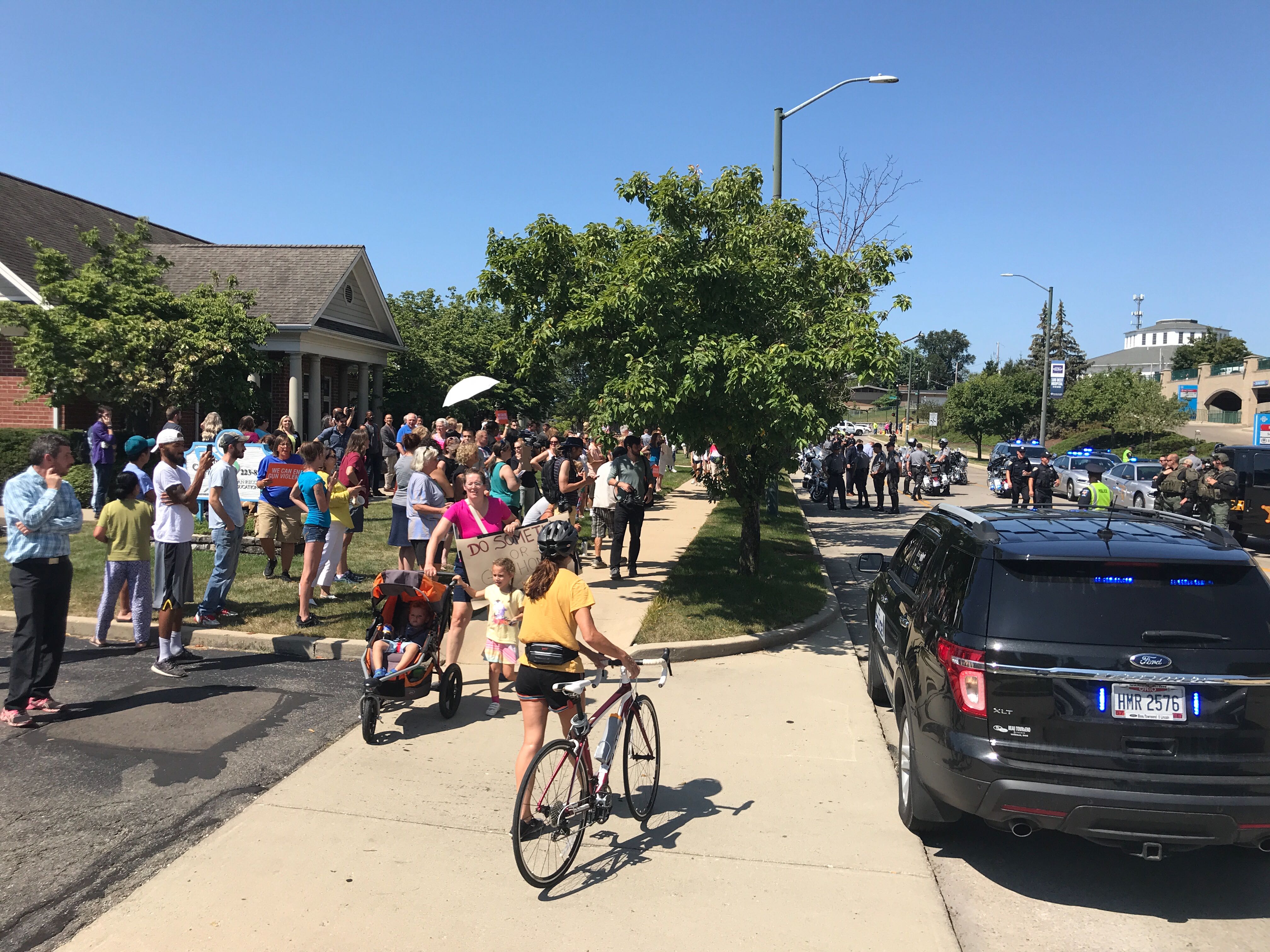 President Trump and the first lady arrived to the Miami Valley Hospital��in Dayton, Ohio, moments ago.

The protesters came, too.

Protesters chanted "No more hate!" and "Dayton strong!" as black SUVs pulled into the hospital. They later sang, "hey hey, ho ho! Donald Trump has got to go!"

While visiting the hospital, Trump is expected to meet first responders, medical professionals and some victims and families.

She painted a gun control sign with them: (in the photo above, from left) 8-year-old Avery, 6-year-old Abby and 8-year-old and Aly.

Asked why she brought her girls out today, she got teary-eyed and told CNN:

“Kids are dying. ... They need to see that these are the kids that could be taken.” 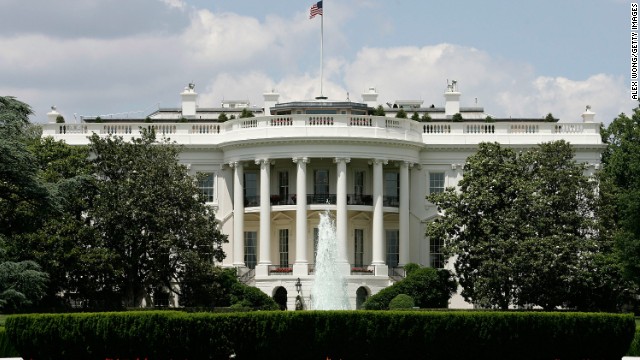 "The staff-led meeting will take place Friday and include senior administration officials along with representatives of a range of companies," White House spokesman Judd Deere said.

President Trump is not expected to attend the session. A list of participants isn't yet available.

President Trump will visit Miami Valley Hospital in Dayton, Ohio, during his stop in the grief-stricken city.

Trump is expected to meet with first responders, hospital staff and possibly some survivors of the shooting while at the facility.

The protesters have set up a "Trump Baby" balloon, and many are holding signs. Some of the messages read:

Check out more of the signs in the clip below: 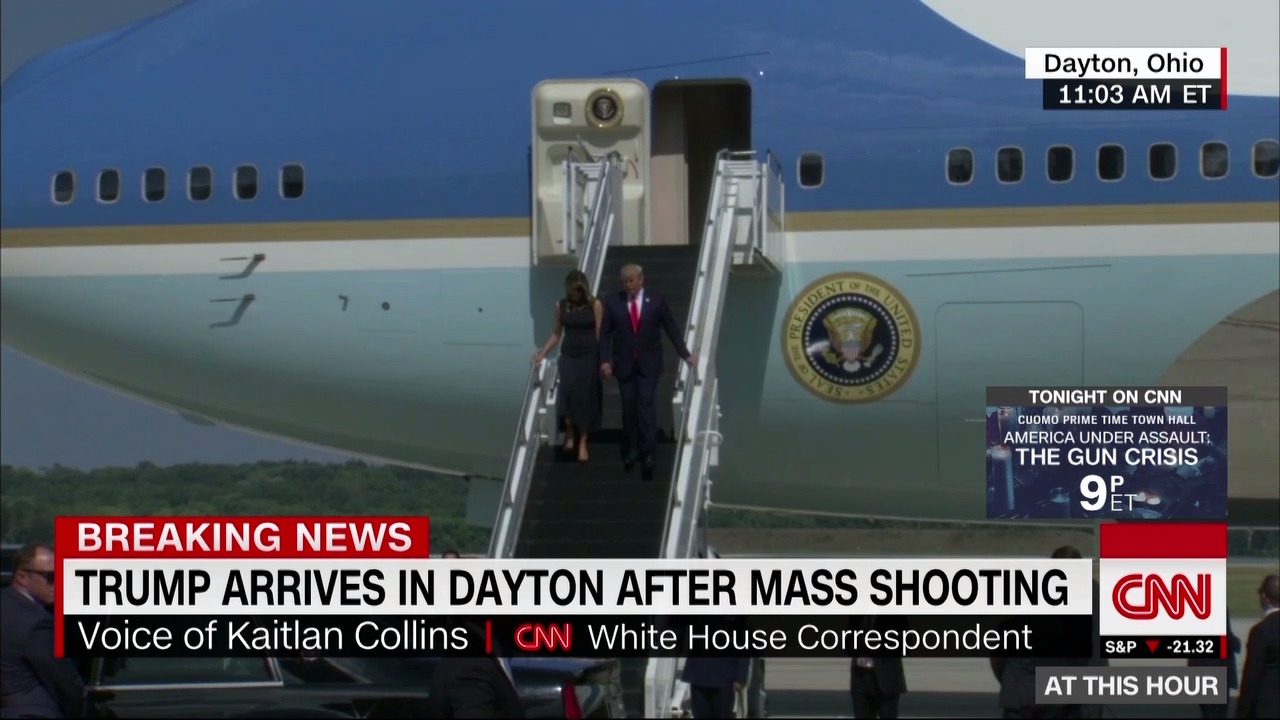 Here's who is greeting them on the tarmac, according to the White House: 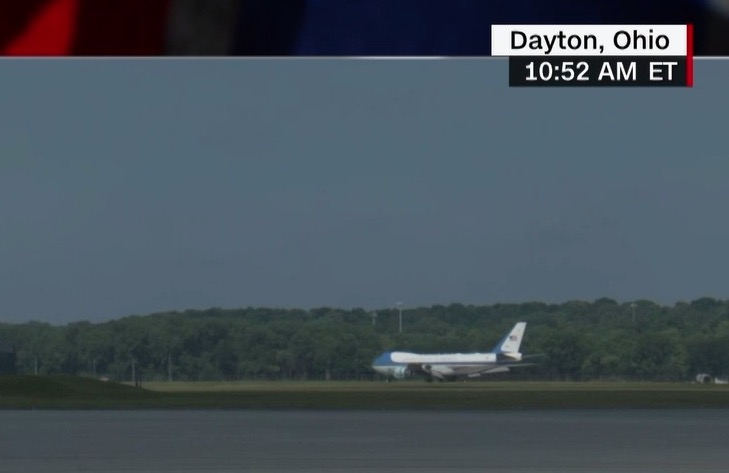 President Trump has arrived in Dayton, Ohio, where nine people were killed in a shooting on Sunday.

We're not sure what's on Trump's schedule, but he's expected to meet with first responders, members of law enforcement and potentially some victims.

President Trump and Republican Sen. Pat Toomey — a key proponent of expanding background checks on gun sales — have spoken “several” times this week about the long-stalled background check bill he co-sponsored with Democrat Joe Manchin, an aide to Toomey says.

The aide said Trump has “expressed a willingness to work with Sens. Toomey and Manchin on the issue.”

Remember: A background check proposal would be a tough sell for conservatives who still harbor reservations about legislation that could be perceived as infringing on Second Amendment rights, but there are a few factors that could be opening the door to expanding background checks that were not there six years ago, when the Toomey-Manchin measure was last seriously considered.

Aides say that the reality is the NRA is not as strong as it once was. Leadership infighting has led to questions about whether they will have the influence they once had in the next election. And while the membership is still strong, expanding background checks generally polls highly even among gun owners.

Asked generally about the NRA dynamic, one GOP Senate aide said “This might be a good moment to do something.”

“There is a growing disdain for that part of the gun culture that thinks the essence of the Second Amendment is being able to walk around with a military grade weapon,” the aide said.

The same aide said Sen. Lindsey Graham, by virtue of his chairmanship of the Judiciary Committee, will be tasked with just how far to go on background checks — and obviously there is already more support for incentivizing states to adopt “red flag” laws.

But the Senate aide said that anything could be possible if Trump put his sustained weight behind it. As we have said repeatedly, a month-long recess is an eternity in congressional negotiations.