Jean-Pierre declined to say whether President Biden has asked the Department of Justice if a federal vaccine mandate was possible, telling reporters Friday, “I don't have any more to add to that,” but pointed to the President’s remarks Thursday during remarks from the East Room.

“I had asked the Justice Department to determine whether that is, they're able to [pass vaccine mandates] legally,” Biden said Thursday, “and they can, local communities can do that, local businesses can do that. It's still a question whether the federal government can mandate the whole country. I don't know that yet.”

More than 80% of the US population — about 274 million people — live in a county considered to have “high” or “substantial” Covid-19 transmission, according to a CNN analysis of data published Friday by the US Centers for Disease Control and Prevention.

This includes more than half of the US population — nearly 55% — who live in areas with "high" transmission, and another 28% live in counties with "substantial" transmission.

That’s about 25 million additional people since Thursday who live in a county where, according to the latest CDC guidance, even fully vaccinated people should mask up indoors.

Less than 1% of the population — fewer than 2 million people — live in areas with “low” transmission.

White House principal deputy press secretary Karine Jean-Pierre defended the administration’s communication efforts after it updated Covid-19 guidance following rising cases and the dominance of the Delta variant, telling reporters at Friday’s briefing that while they haven’t held a Covid-19 briefing this week or had any health officials join the White House briefings, “I would argue that we had the President of the United States speak to this yesterday, he gave a more than 30 minute speech about where we are as a country.”

“We heard from the President yesterday, we heard from the President about the Delta variant and vaccinations in general the day before yesterday when he was in Pennsylvania where he was supposed to talk about ‘Buy American,’ which he did, but he led off talking about the vaccinations, we have had our doctors on your networks on many of the networks that are here talking probably all of them, talking about the Delta variant, all throughout these last couple of days, so they have been out there, they've been talking about it,” Jean-Pierre said.

“The doctors have been on national television all week, speaking to this, answering the questions on your networks, so they've been out there talking about, they're not hiding,” she added.

Jean-Pierre also told reporters, “our message has always been clear throughout — we need more people to get vaccinated to stop the spread of this variant, and so, we have to continue to make that effort.”

Jean-Pierre also pointed to data released by the CDC today in their weekly Morbidity and Mortality Weekly Report (MMWR) that led to new mask guidance, telling reporters Friday, “The CDC’s first and foremost priority is getting the American people information as quickly as possible, and so, that's what they did on Tuesday, they got it as quickly as they can.”

“They're going to be releasing this data today, as you know, and it was clear that the vaccine — it was clear that vaccinated people have the ability to transmit, and action needed to be taken quickly, and that's why they did it.”

The US Food and Drug Administration has expanded the use of Regeneron’s antibody therapy so it could be used as a preventative treatment for certain people who have been exposed to Covid-19, the company said on Friday.

The FDA’s expanded authorization will allow the antibody treatment to be used in people who are not fully vaccinated or are not expected to mount an adequate immune response after they have been exposed to someone who is infectious or for those who are at high risk of exposure to someone with Covid-19 in an institutional setting.

It is not authorized as a substitute for vaccination, the FDA said.

Regeneron’s late-stage trial data showed an 81% reduced risk of symptomatic infections in people who came into close contact with someone with Covid-19.

Regeneron’s antibody therapy is the only one that is currently authorized to be used both to treat and prevent Covid-19 infections. It was the treatment given to former President Trump when he became infected last year, as well as several other high-profile politicians.

The initial authorization allowed doctors to use the treatment for any patient who is 12 years old or older who tests positive for Covid-19 and is at high risk for severe disease, but is not yet hospitalized.

In May, the US stopped the distribution of Eli Lilly’s monoclonal antibody treatment since it didn’t seem to be as effective against virus variants.

At least one Trauma Service Area (TSA) in Texas had zero intensive care unit beds available on Wednesday, according to the most recent data available on the Texas Department of State Health Services Covid-19 Tests and Hospitals dashboard.

Area N, located around Bryan, Texas which is north of Houston and east of Austin, showed no available ICU beds and 49 available hospital beds on the dashboard.

At least seven other TSAs had less than ten ICU beds left, the dashboard reports. Those include areas around Amarillo, Wichita Falls, Abilene, Killeen, Waco, Beaumont, and Victoria, according to the dashboard.

AdventHealth has elevated its Covid-19 status to "black" due to increased hospitalizations in the Central Florida network. This means that all non-emergency inpatient and outpatient surgeries and procedures will be rescheduled. Time-sensitive pediatric procedures will be carried out with the approval of AdventHealth's chief medical officer.

"None of these patients thought they would get the virus, but the Delta variant has proven to be so highly contagious that even the young and the healthy, including pregnant patients, are now starting to fill up our hospitals," he said.

Finkler said that those vaccinated people who end up being hospitalized are there because they have comorbidities that would put them at risk because their immune system is not functioning normally.

The World Health Organization is in “very positive” discussions with countries – including China – on the direction of the next phase of its investigation into the origins of the novel coronavirus, Dr. Mike Ryan, director of WHO’s Health Emergencies Program, said on Friday.

“I think we're (in) very positive consultations now with a large number of member states, including our colleagues in China, to look at what we need to move forward next,” Ryan said at a WHO news briefing.

Following the Phase 1 report on the mission, “Many, many studies were proposed going forward, and we do know our Chinese colleagues are implementing some, if not all, of those studies at the moment,” he said.

“We’re expecting all countries, all member states of WHO, to cooperate and support this process. And I suspect that we will get that cooperation.”

“The one consistent thing we've heard from all countries has been, ‘Let's not politicize the science,’ and the next thing that happens is the science is politicized,” Ryan said. “We want to reassure our colleagues in China that this process is still, and is, and has always been, driven by science,” he continued.

“We have stuck to the principles of the process of this from the very beginning, we've not ceded to pressures on one side or the other. The (director-general) has tried to steer at a path that has been driven by science, by evidence, taking no sides, and trying to reach the objectives that we all want,” Ryan added.

CNN's chief medical correspondent Sanjay Gupta broke down the US Centers for Disease Control and Prevention's new study about the Delta Covid-19 variant spread— and what its findings could mean for vaccinated and unvaccinated Americans across the country.

"The idea that people who were vaccinated still were far less likely to develop severe symptoms, hospitalizations, deaths, all the things that we've talked about since the vaccines were first authorized, remain true. The vaccines work, in that regard, but the idea that someone [who is vaccinated] could test positive and still develop enough virus in their nose and mouth to transmit is really what this data is showing," Gupta told CNN's Ana Cabrera following the release of the study.

The study, published by CDC Friday, describes 469 Massachusetts residents who were infected in a July outbreak in Barnstable County, which includes the summer vacation destination Provincetown. No deaths were reported among them.

About 74% — or 346 cases —had been fully vaccinated. Of those cases, 79% reported symptoms. Genetically sequenced cases revealed the Delta variant as the main culprit.

"I still want to reiterate just how effective the vaccines can be at doing the things that people I think looked for them to do the most. Prevent severe hospitalization and death. But it is clear that this Delta variant is far more transmissible and as a result of that, probably even vaccinated people are transmitting this at a higher rate than we thought," Gupta said.

In terms of what comes next, Gupta said this study will likely spark new questions about preventative measures, including masking and when Americans may need a booster shot.

"They're saying this is really, really contagious. So even if there's not a lot of viral transmission now, it's likely to increase, because of the contagiousness of this and also because we're going into cooler and dryer weather where we know virus tend to transmit more easily anyway," Gupta said. "So, I think there's going to be some changes that come about here, with regard to those recommendations, both on boosters and masking, you know, throughout the country."

On Tuesday, Walensky previewed these findings while unveiling guidance that people in areas with "high" or "substantial" Covid-19 transmission should resume wearing masks indoors. Over 75% of the US population live in these areas.

Here's a look at some of the key findings of the study: 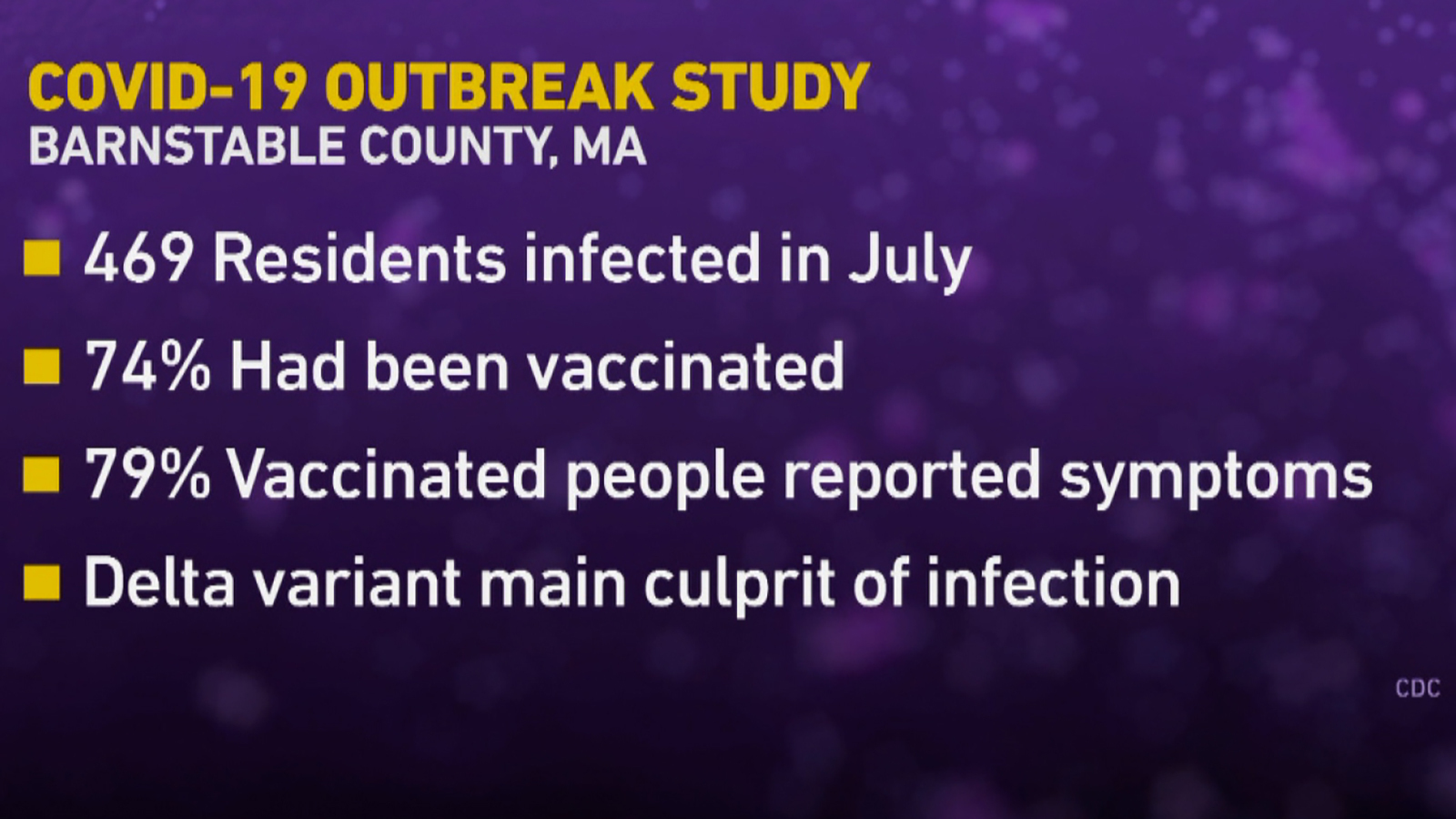 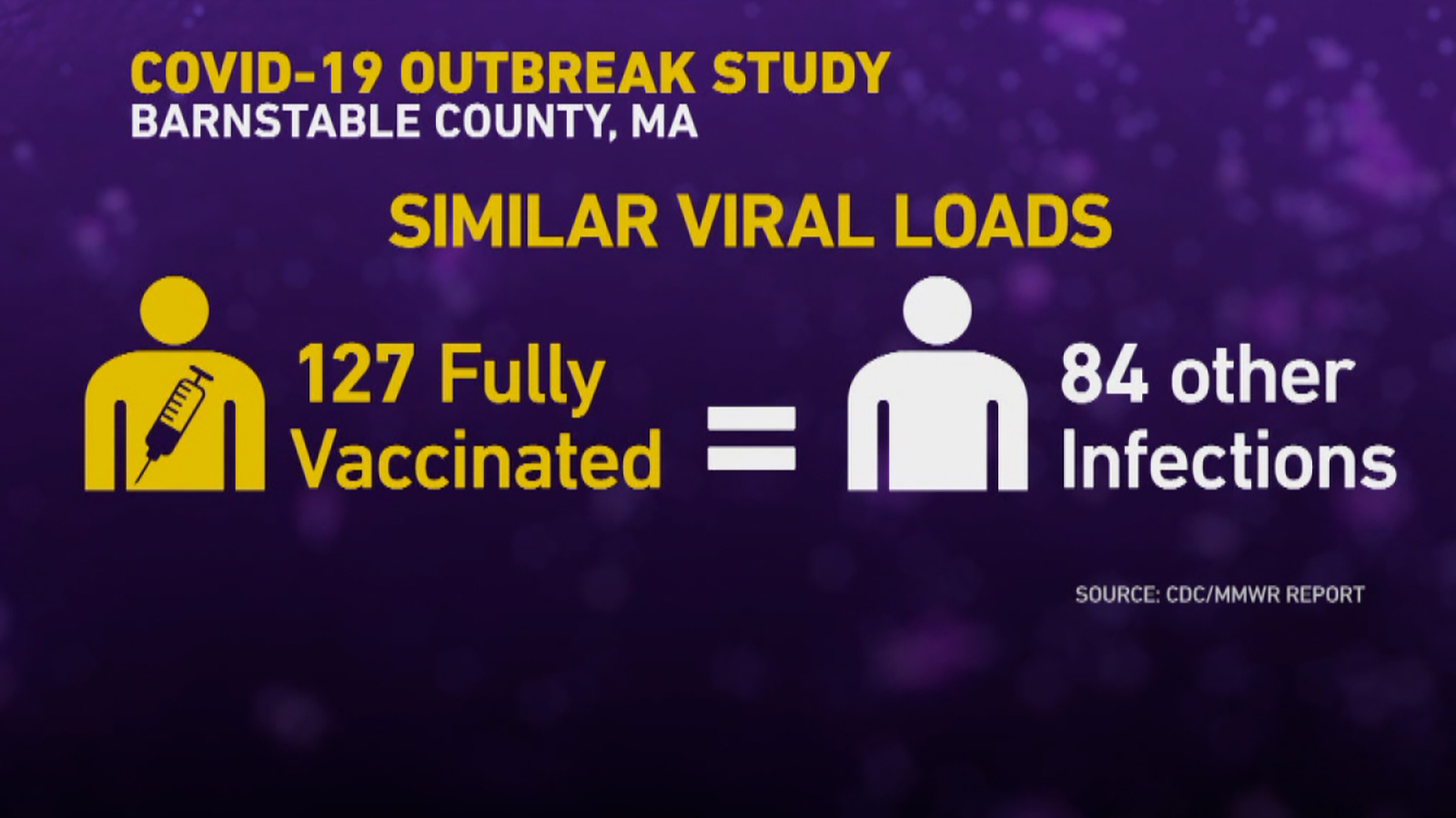 Among millions of adolescents who have received the Pfizer/BioNTech coronavirus vaccine, new data show that most of those who have reported side effects experienced non-serious conditions – and the heart condition myocarditis was listed among 4.3% of all reports.

Data published Friday by the US Centers for Disease Control and Prevention finds that among 8.9 million adolescents vaccinated between December and July, reports of adverse events were received for about 1 per 1,000 vaccines.

Overall, 8,383 or 90.7% of reports were for non-serious events and 9.3% were for serious events, including death. No reports of death were determined to be the result of myocarditis.

Among the rare serious reports only, the most common were: chest pain at 56.4%; increased troponin, which can indicate a problem with the heart, at 41.7%; and myocarditis, or inflammation of the heart muscle, at 40.3%, according to the report.

Some more background: Beginning in June, reported cases of myocarditis emerged among young people after receiving the vaccine, primarily among boys. Later that month, the US Food and Drug Administration added a warning to the fact sheets for the Moderna and Pfizer/BioNTech coronavirus vaccines.

CDC researchers wrote in the new data that, as of July 16, the federal government's Vaccine Adverse Event Reporting System, or VAERS, received 9,246 reports among 12- to 17-year-olds after receiving the Pfizer/BioNTech vaccine, out of about 8.9 million adolescents vaccinated. The VAERS surveillance system relies on people to submit reports and might not be generalizable to the overall vaccinated population. Common conditions reported were dizziness, temporary loss of consciousness and headache.

"The findings summarized in this report are consistent with the safety data observed in preauthorization trials for Pfizer- BioNTech after vaccination among persons aged 12–25 years, with the exception of myocarditis, a serious adverse event detected in postauthorization safety monitoring," CDC researchers wrote in the report.

"Local and systemic reactions after vaccination with Pfizer-BioNTech vaccine were commonly reported by adolescents aged 12–17 years to U.S. vaccine safety monitoring systems, especially after dose 2," the researchers wrote. "A small proportion of these reactions are consistent with myocarditis."