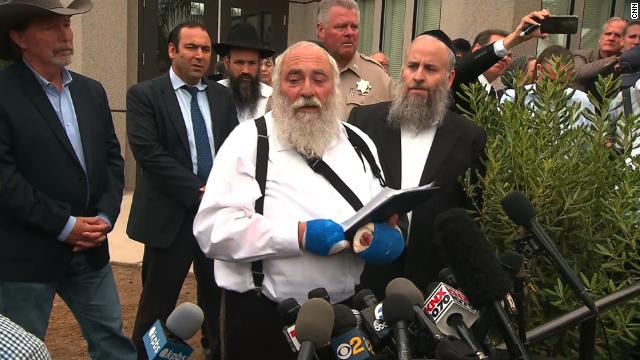 Rabbi Yisroel Goldstein, leader of Congregation Chabad, gave an emotional account of his encounter with the shooter.

Speaking at a press conference on Sunday, Goldstein said he came face-to-face with the shooter in the lobby of his synagogue, saying he saw "a young man standing with a rifle, pointing right at me."

Goldstein was shot in the hands, losing an index finger in the attack.

The gunman was able to run away, got into his car and fled the scene.

Goldstein said Morales had recently discovered his Jewish roots and traveled 3 ½ hours from El Centro, California, to pray with the congregation on Passover. The rabbi had previously told Morales to arm himself when he comes to their congregation, saying he told Morales, "we never know when we will need it."

Goldstein choked up as he talked about his friend Lori Kaye, who died in Saturday's shooting. "She died to protect all of us," he said. "She didn't deserve to die right in front of my eyes."

Goldstein recalled grabbing a prayer shawl to wrap his arm and bleeding fingers. He said he saw his congregation outside and felt compelled to do something, so he stood on a chair and declared:

"We are a Jewish nation that will stand tall, we will not let anyone or anything take us down. Terrorism like this will not take us down."

Artemis Moshtaghian contributed to this report 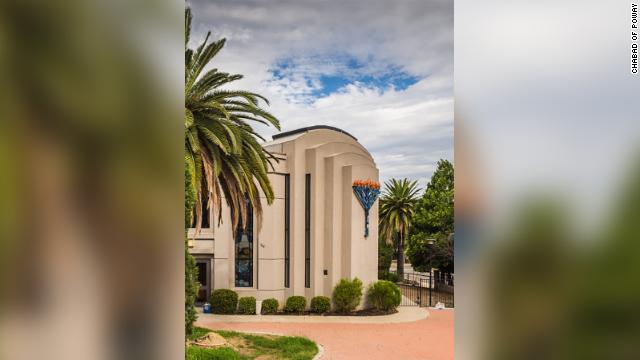 A person by the username Cam N has started a GoFundMe campaign to collect donations for victims of the synagogue shooting.

According to the description on the page, the funds will go directly to the Chabad of Poway.

"These donations would be used to pay for for any necessary medical operations for the victims, funeral services, synagogue reparations or anything else the synagogue would need assistance with," the description reads. "With your help, we can get the victims the help they need. Thank you."

The person who started the campaign wrote on the page that while they don't worship at the synagogue in Poway, seeing an attack on a place of worship horrified them and motivated them to start the campaign.

The page for the campaign can be found here. 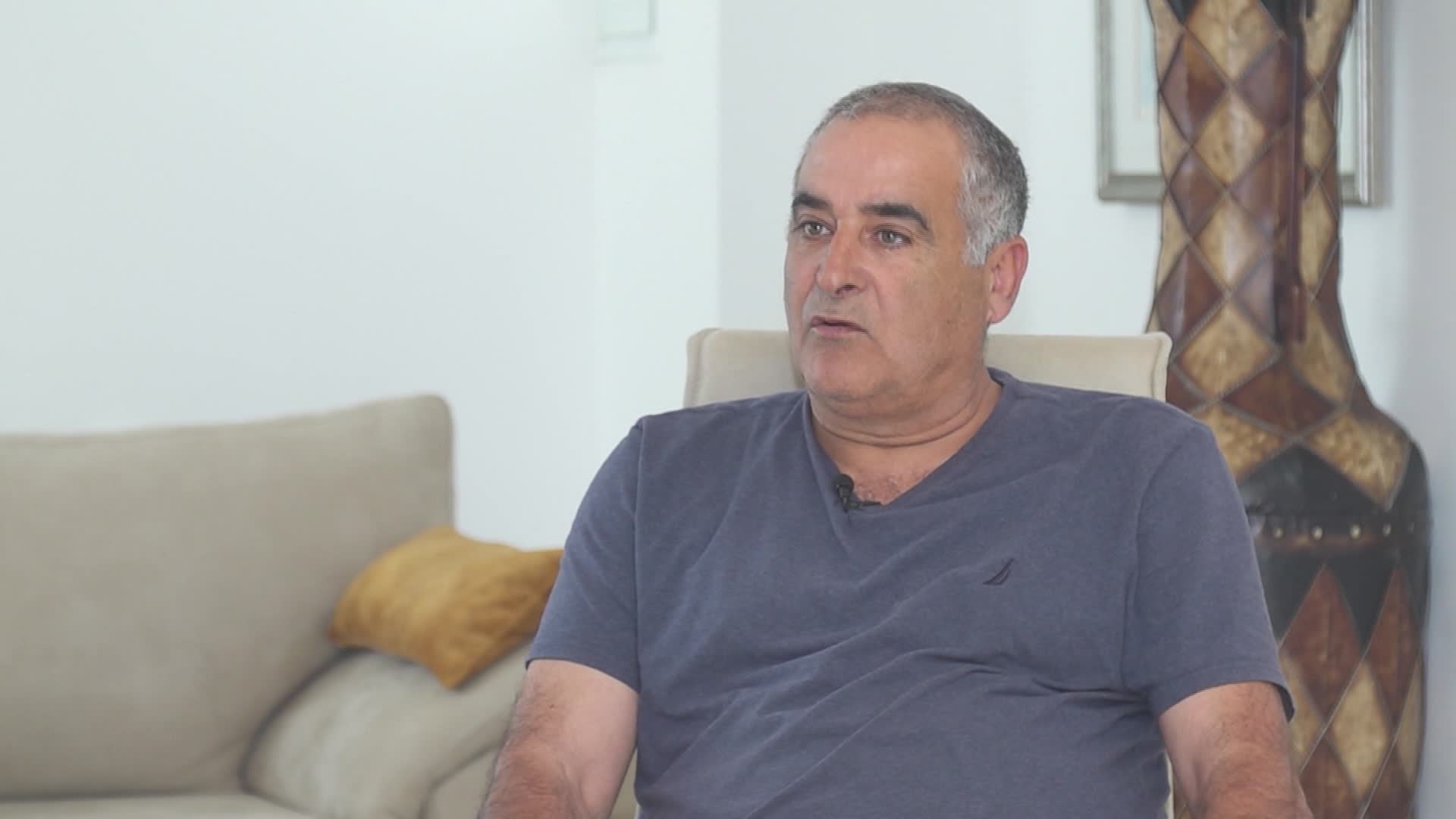 The father of Almog Peretz, who was wounded in the synagogue shooting, said he never believed something like this could happen to his family in the United States.

Aharon Peretz, who lives in Israel, heard about the shooting on Saturday evening after the end of Sabbath. He tried to call his son, Almog, and his daughter, Eden Dahan, who attend the Chabad synagogue, but he says their phones were off because it was still the Sabbath in the US.

“My wife and I were very afraid,” Peretz told CNN’s Oren Liebermann. “We started to run to figure out how to get ahold of them.”

Peretz was eventually able to get in touch with a neighbor in California, who told him his son and granddaughter had been lightly injured in the shooting.

He said his children left Israel to escape regional violence.

“The children always said, ‘Let’s leave, Let’s leave.’ But my wife and I stayed here, and they left for the United States,” Peretz explained.

"The fact that violence still found them in the US is “unbelievable,” he added.

Still, Peretz was happy to hear about how his son rushed children out of an emergency exit to safety during the shooting.

“My son is a hero — truly a hero. I know him — he’s a serious man. He saved the kids. All the best to him,” said Peretz. “It’s good that he saved young children when someone came to kill them. He cared for them and saved them and put them in a place where they can be safe.”

Irena Slovskayah, who was at an anti-hate rally in Long Beach on Sunday, told CNN's Paul Vercammen she was horrified by the synagogue shooting in Poway and by anti-Semitic rhetoric in the US.

"I just feel unsafe," she said. "I feel unsafe with the rhetoric and people keep asking me if I'm Jewish, and I don't understand why that's even relevant."

Slovskayah added that the shooting has made her afraid to attend synagogue.

All the victims from the shooting at Congregation Chabad synagogue on Saturday have been discharged from Palomar Health in San Diego County, a hospital spokesperson says.

Rabbi Yisroel Goldstein will be holding a press conference at the synagogue today at 5 p.m. EST. 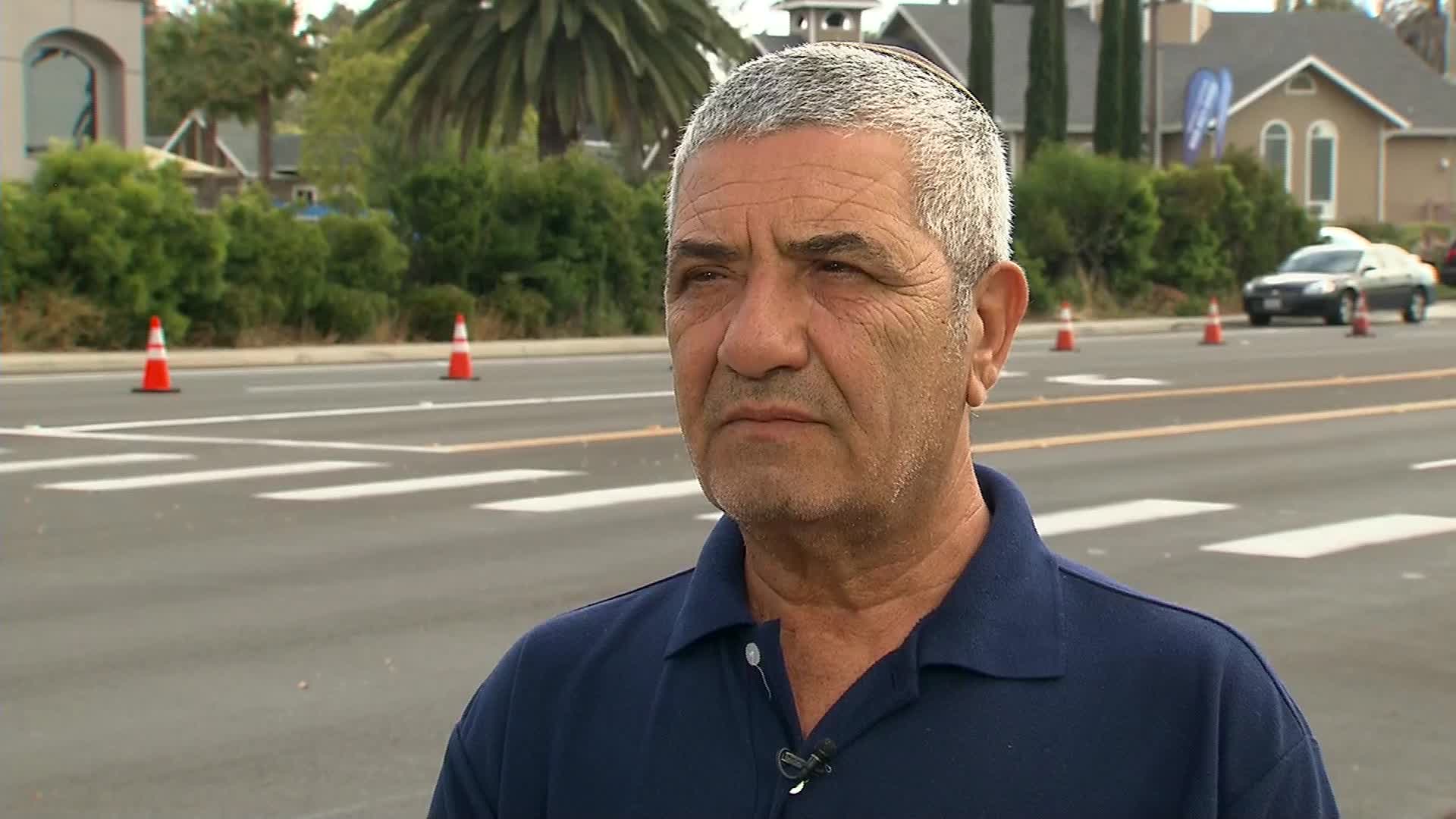 Shimon Abitbul is visiting the US from Israel and was at Congregation Chabad in Poway during Saturday's shooting. He talked to CNN's Nick Watt about the experience.

Abitbul said he first tried to protect his grandson from the shooter by lying on top of the child. Once he heard a pause in the gunfire, he took his grandson and ran away from the synagogue and into the neighborhood. Abitbul's granddaughter was being led to safety by Almog Peretz, who then got shot in the leg.

According to Abitbul, his grandchildren didn't understand what was going on. They thought they were playing, and there wasn't a real shooting.

Abitbul also described the heart-wrenching moments when Lori Kaye's husband, who is a doctor, tried to save her life. Abitdul, who is a paramedic in Israel, said they saw a hole in her chest and tried to perform CPR on her. Kaye ultimately died. 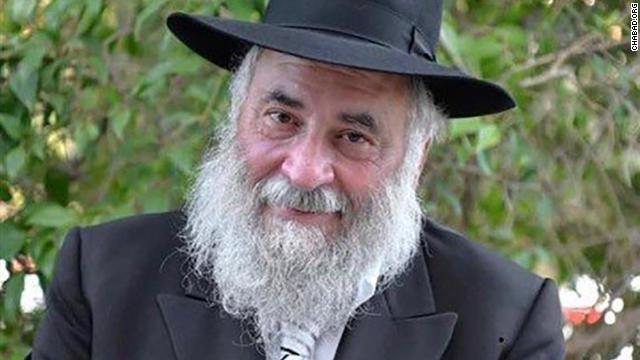 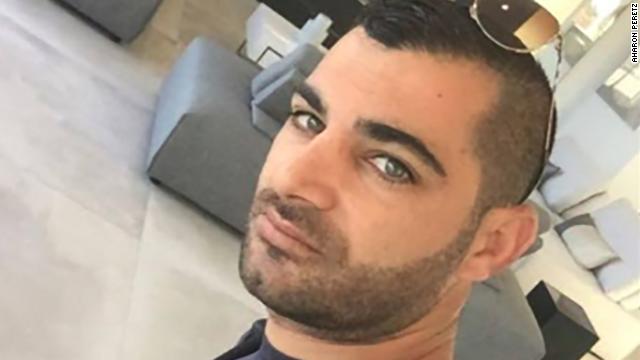