At least 8 dead in boat fire off California coast

Five people have been rescued from the Conception, a diving boat that caught fire early this morning near Santa Cruz Island, according to US Coast Guard Petty Officer Mark Barney.

Two of the people rescued reportedly have leg injuries.

The Conception is a 75-foot boat that left Saturday for a three-day diving trip. It was scheduled to return later today, according to the company website.

A boat on a three-day Labor Day diving excursion has "burned down," according to the Santa Barbara County Fire Department.

The incident happened on the north side of Santa Cruz Island that faces the inland.

The Conception set out from Santa Barbara on Saturday and visited several diving spots around Santa Cruz Island, an image of the boat's track from MarineTraffic.com shows.

Here are images of the route the boat took after leaving Santa Barbara:

Four crewmembers from the Conception diving vessel are being brought to shore, according to US Coast Guard Los Angeles Chief Warrant Officer Josue Mendez.

Mendez tells CNN that the captain of Conception is still on scene.

Crew injuries are unknown at this time.

The Conception, the boat set ablaze on early this morning, set out from Santa Barbara on Saturday for a diving excursion, according to the website for the diving company, Truth Aquatics.

The boat was set to return to shore today at 5 p.m.

"On the Labor Day trip, divers have the unique opportunity to explore the pinnacles of San Miguel Island," Truth Aquatics said on its website. "The beginning of September is the best time to be at San Mig, which see strong winds and swell during much of the year."

The company's website said the crew was using the Conception this weekend to visit San Miguel where divers were expecting to see a variety of interesting sea life.

"This rarely visited island is loaded with color: anemones, crabs, nudibranchs covering every inch of wall with a rainbow. Great for macro-photography," the website said.

Other possible destinations during the trip included Santa Rosa, Santa Cruz, Anacapa, and Santa Barbara Islands, according to the website.

The itinerary: Divers were scheduled to meet at the Santa Barbara Harbor on Friday night, boarding anytime after 8 p.m. The Conception was scheduled to depart at 4 a.m. Saturday, then return on Monday afternoon.

Firefighters are responding to the dive boat fire, which is off the north side of Santa Cruz Island. There are 34 people missing.

Here's a map showing where the island is located off the California coast in the Channel Islands National Park:

Thirty-four people are confirmed missing in a boat fire off the coast of Southern California, according to Santa Barbara County Fire Department PIO Mike Eliason.

“They are unaccounted for, but it's very foggy out there,” he said.

"We're still holding hope that someone may have swam to shore. When they anchor overnight they're pretty close to shore. We have to hope, but we plan for worst case scenario," Eliason said.

Santa Barbara County Fire Department received a mayday call of a vessel in distress off the Channel Islands at 3:30 a.m. local time.

According to Eliason, the boat involved is a popular overnight dive boat and fishing boat.

Santa Barbara County Fire does not have assets involved in the rescue.

Coast Guard Senior Chief Aaron Bemis told CNN the fire on the boat keeps re-flashing, hampering efforts to board the boat and look for survivors.

“Multiple coast guard and local Ventura County Fire Department assets on scene, but we're not able to yet breach the hull and see if there's any survivors at this point,” Bemis said.

Bemis could not confirm any fatalities, “I'm unaware of any survivors at this time, and I'm also no confirmed casualties at this time. It's too early to tell.”

"It's a 75-foot commercial dive vessel that reportedly had 39 people on board. The five crew members able to disembark because they were in the main cabin. The 34 passengers were below decks," Bemis added.

"The report we got was they were trapped by the fire. The fire was so intense that even after it was put out, we're not able to actually embark the vessel and, you know, look for survivors at this point. It's still ongoing," he said. 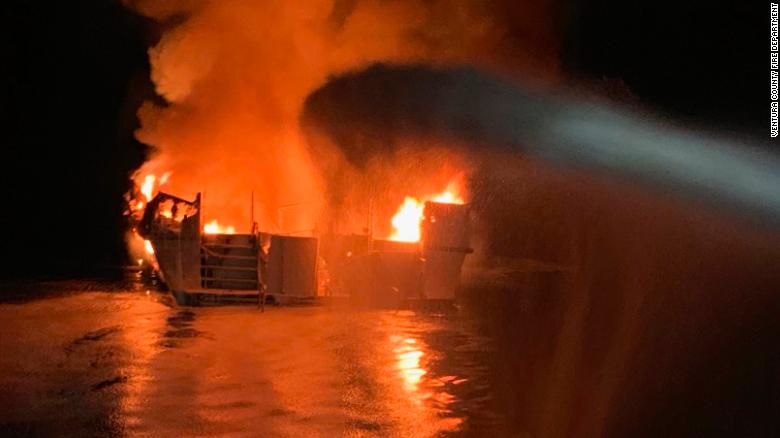 The Ventura County Fire Department shared photos on Twitter of the VCFD personnel responding to the fire early Monday morning.

VCFD said its firefighters reached the boat fire off the north side of Santa Cruz Island at approximately 3:28 a.m. local time. The department said the Coast Guard is supporting rescue efforts. 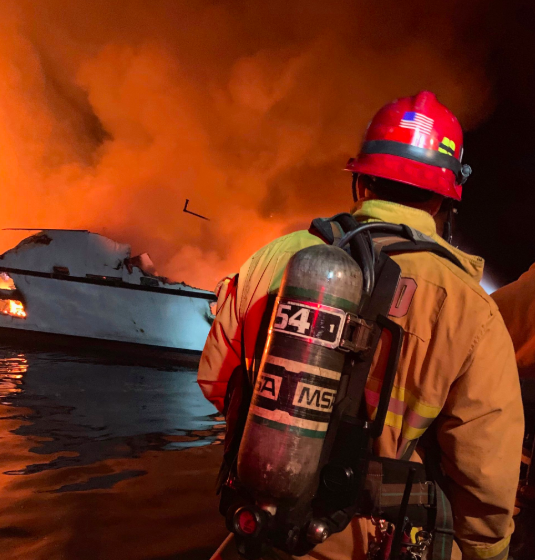