Protesters in Seattle, Washington, have started clashing with law enforcement, according to the Seattle Police Department.

Police added that they had fired pepper spray after protesters cut security cameras at the East Precinct.

Eight people have been arrested so far, police said.

The FBI Louisville office is asking for the public’s help for information on those who were involved in the shooting of two police officers in Louisville, Kentucky tonight during the protests.

“FBI Louisville Is Seeking Information on Individuals Inciting Violence to Include the Shooting of Two Louisville Police Officers on September 23, 2020 During First Amendment-Protected Peaceful Demonstrations," according to a post on the FBI’s site.
"We are asking for the public’s help to submit any videos related to the shooting of two LMPD officers on September 23, 2020, at approximately 8:30 PM near Broadway and South Brook Street.”

It's just past 11:30 p.m. PT on the West Coast, but crowds of protesters are still marching after today's news of the indictment in the Breonna Taylor case.

Protesters are also on the streets of Portland, Oregon, where they have gathered near the Justice Center.

People marched in cities across the United States Wednesday, including New York, Philadelphia, Louisville, and Nashville.

Police ordered hundreds of protesters to disperse from downtown San Diego tonight, after clashes between demonstrators and law enforcement.

"In response to acts of violence and vandalism, the protest in front of the SDPD Headquarters building (1401 Broadway) has now been declared an unlawful assembly," the police department said in a statement.

The police said demonstrators may be arrested if they do not disperse. Officers also said there are several routes allowing free movement out of the area.

There are also other protests happening across the West Coast, including in Los Angeles, California and Portland, Oregon.

Tamika Palmer, Breonna Taylor's mother, was surrounded by her youngest daughter, sister, and attorneys when she learned that only one officer would be indicted for wanton endangerment.

There was "a lot of sadness and weeping," said Christopher 2X, a community activist who is assisting Palmer and who stood outside the room when Attorney General Daniel Cameron announced the decision.

"It saddens me to witness, again, a mother of a victim in such excruciating pain ... But it was expected in regards to how things have evolved over time in the Louisville Metro community, they usually always end up like this when those families who are looking for justice don't receive it."

As Palmer wiped away her tears, she was embraced by her daughter Bianca Austin and attorney Lonita Baker, who attempted to comfort her.

Baker described it as a "tough" situation and said they were "just loving on each other as a family."

"We didn't fathom that it would be a situation where they would indict on charges against the neighbors and absolutely nothing on Breonna," she said.

“Tonight, I’m thinking of Breonna Taylor’s family who is still grieving the loss of a daughter and sister," she wrote.

"We must never stop speaking Breonna’s name as we work to reform our justice system, including overhauling no-knock warrants.”

Former Vice President and Democratic presidential nominee Joe Biden has tweeted his thoughts on tonight’s protests and the shooting of two police officers in Louisville:

"Even amidst the profound grief & anger today's decision generated, violence is never & can never be the answer. Those who engage in it must be held accountable. Jill & I are keeping the officers shot tonight in Louisville in our prayers. We wish them both a swift & full recovery."

Editor's note: Laura Coates is a CNN senior legal analyst. She is a former assistant US attorney for the District of Columbia and trial attorney in the Civil Rights Division of the Department of Justice. The views expressed in this commentary are her own.

After 195 days, no officer has been arrested or charged for killing Breonna Taylor.

Wednesday's grand jury indictment of former Louisville Det. Brett Hankison hasn't brought justice for the death of Breonna Taylor. Hankison was charged with first-degree wanton endangerment charges because, prosecutors say, bullets from his firearm entered a neighboring apartment where three residents were home. In truth, this has changed nothing.

Justice feels like the elusive carrot that is dangled but never caught.

Consider the fact that Hankison was charged for shooting in the manner that could have killed someone.

No officer has been charged for the fact that someone actually did die.

Here's the apparent logic behind that decision: Sgt. John Mattingly, Det. Myles Cosgrove and now-fired Det. Hankison executed a warrant on Taylor's residence. Her boyfriend, Kenneth Walker, inside the home at the time, feared they were the victims of a home invasion when the officers banged on the door but, according to Walker, didn't respond when Taylor asked "Who is it?" before breaking down the door.

As the front door was broken down, Walker fired one shot at the first person to enter the apartment, hitting Mattingly. Mattingly and Cosgrove, returning fire in the direction of Walker, shot six and 16 times respectively, Kentucky Attorney General Daniel Cameron said. Hankison, meanwhile, indiscriminately and, according to interim Louisville Police chief Robert Schroeder, "blindly" fired 10 rounds into the apartment.

Collectively, the three officers fired more than 30 rounds. Cameron, citing medical evidence obtained by his team, said that six bullets struck Breonna Taylor, with one being fatal. Taylor was in the hallway with Walker when she was struck. Prosecutors could not determine who fired the fatal shot or if Hankinson ever shot Taylor, but ultimately concluded that Mattingly and Cosgrove were justified in their use of force and would not be charged in Taylor's death. Hankison's attorney has declined to comment. 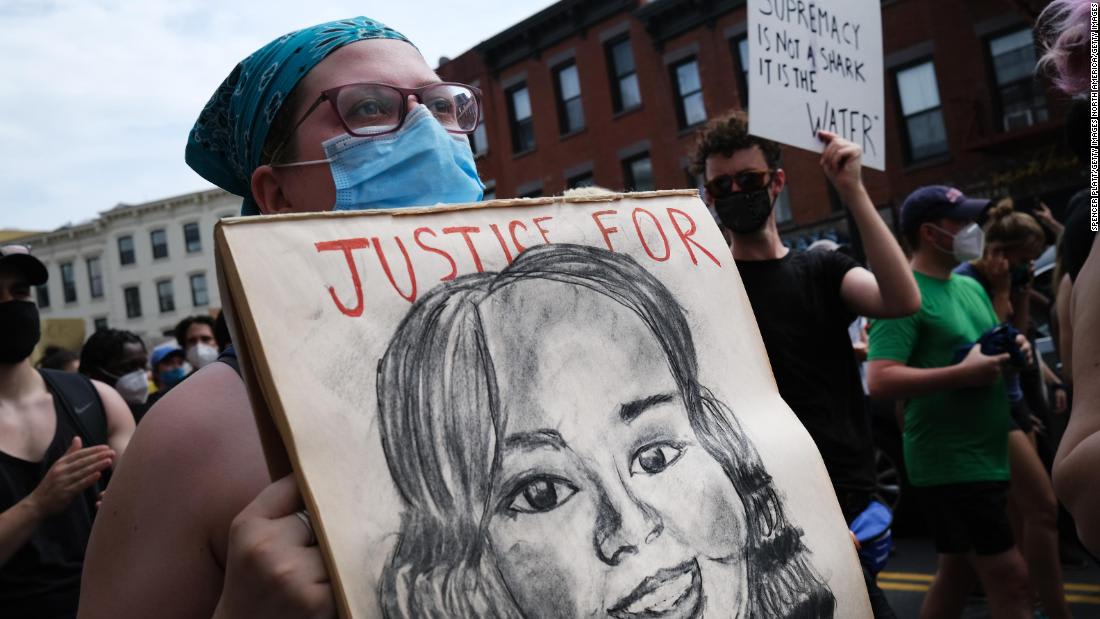 Athletes -- many of whom have used their platforms to take stances against police brutality over the past few months -- expressed their disappointment Wednesday after a grand jury in Louisville decided not to charge officers with killing Breonna Taylor.

"I'm devastated, hurt, sad, mad! We want Justice for Breonna yet justice was met for her neighbors apartment walls and not her beautiful life. Was I surprised at the verdict. Absolutely not but damnit I was & still am hurt and heavy hearted! I send my love to Breonna mother, family and friends! I'm sorry! I'm sorry! I'm sorry!!"

WNBA player Kayla McBride, a guard on the Las Vegas Aces, said the news is "a tough pill to swallow, because it's a large part of why we're here."

USWNT star Megan Rapinoe also wrote on Twitter, "My heart is with the family of Breonna Taylor right now. My god. This is devastating and unfortunately not surprising. Black and brown folx in this country deserve so much more."