President Donald Trump returned to the campaign trail in Tulsa on Saturday, as protests over racism and police brutality swept the country.

Trump held his first rally since the coronavirus pandemic began on a tense Juneteenth weekend in the Oklahoma city, where the 1921 Tulsa race massacre left up to 300 Black residents dead and the Black Greenwood District in ruins.

Thousands of people, many wearing MAGA hats and waving American flags, arrived at Tulsa's Bank of Oklahoma Center arena, while a group of protesters chanted "Black lives matter" near one of the site's entrances.

After the number of people at Saturday's rally was smaller than initially expected, Trump thanked those who attended the event.

"You are warriors. We had some very bad people outside. They were doing bad things. But I really do appreciate it," Trump said.

Later, the President said there were "very bad people" outside, describing protesters as "thugs."

There were large groups of protesters in downtown Tulsa near the site of the rally, police said, but they were demonstrating peacefully. 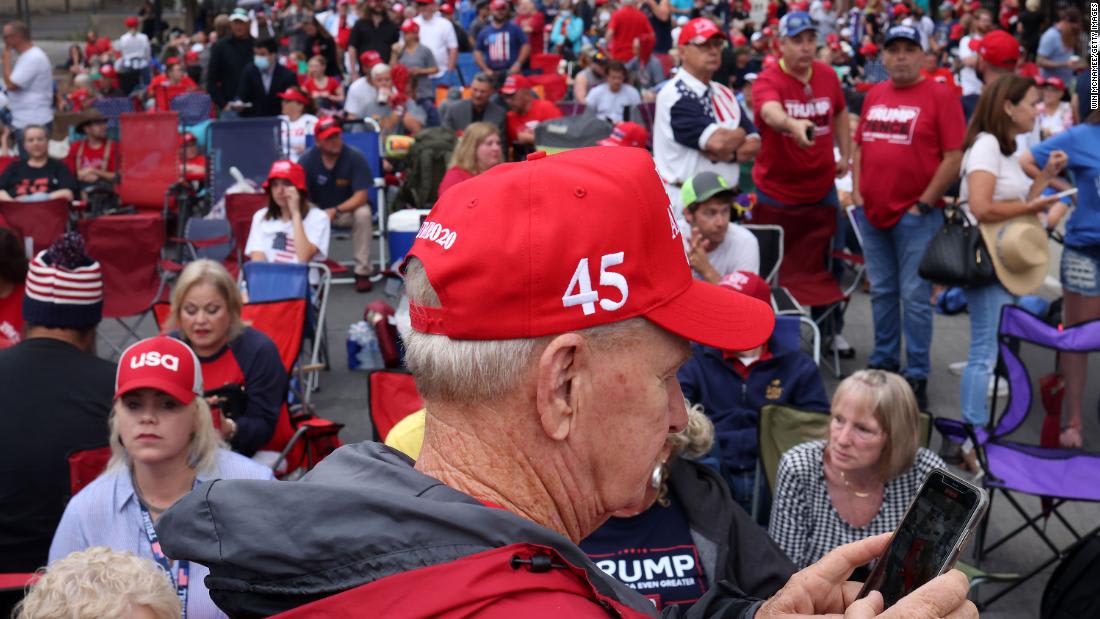 There are large groups of demonstrators walking around downtown Tulsa near where President Donald Trump is holding his rally tonight, according to a tweet by the Tulsa Police Department.

“These groups are causing traffic issues, however, they have been demonstrating peacefully,” Tulsa police tweeted.

Police are asking people to avoid the downtown Tulsa, if possible.

President Donald Trump suggested passing legislation to make flag-burning illegal during his remarks at his rally in Tulsa, Oklahoma, lamenting demonstrations he’s seen across the country.

“Tonight, we know leftist radicals in Portland, Oregon, ripped down a statue of George Washington, and wrapped it in an American flag, and set the American flag on fire. Democrats! All Democrats!” Trump told supporters gathered in the half-filled arena.

“And you know, we oughta do something, Mr Senators, we have two great senators, we oughta come up with legislation that if you burn the American flag, you go to jail for one year,” the president added, turning to Oklahoma Senators Jim Inhofe and James Lankford. “Jim and James, you know we oughta do it. You know, they talk about freedom of speech, and I believe in freedom of speech. But that’s desecration.”

Trump told governors on a call earlier this month he thought the Supreme Court Decision that protected flag burning as free speech should be revisited, calling the act a “disgrace.”

"We have a different court and I think that it's time that we review that again. Because when I see flags being burned -- they wanted to crawl up flag poles in Washington and try and burn flags but we stopped them," the President told governors, according to audio of the call obtained by CNN.

“The unhinged left-wing mob is trying to vandalize our history, desecrate our monuments, our beautiful monuments, tear down our statutes, and punish, cancel and persecute anyone who does not conform their demands for absolute and total control. We’re not conforming.”

Trump went on to add: “This cruel campaign of censorship and exclusion violates everything we hold dear as Americans. They want to demolish our heritage so they can impose a new oppressive regime it its place.”

On Wednesday, an official pushed back against reports the Trump administration was considering renaming bases named for Confederate generals, telling CNN’s Jason Hoffman: “This is incorrect. The President reiterated today that we won’t be erasing our history and isn’t considering changing the names of bases.”

Some context: The death of George Floyd is leading to the removal — by protesters, in some cases, and city leaders, in others — of contentious statues that have riled some residents for decades, if not longer.

Controversial monuments, especially Confederate monuments, have been the subject of nationwide debate, particularly since Dylann Roof killed nine African Americans in a Charleston, South Carolina, church in 2015 in an effort to "start a race war."

And it flared up again after white nationalists marched in 2017 to protest the removal of a Robert E. Lee statue in Charlottesville, Virginia, where a counter protester was killed amid violent clashes between demonstrators.

Some say they mark history and honor heritage. Others argue they are racist symbols of America's dark legacy of slavery. While some cities have already made efforts to remove them, others have passed laws to protect them.

Another person has been shot at the intersection near the Wendy's restaurant where Rayshard Brooks was fatally shot by an Atlanta police officer.

Atlanta Police spokesman Anthony Grant told CNN the incident happened around 6 p.m. when officers found a 35-year-old man shot in the leg at the intersection of University Avenue and Pryor Road NW.

The man, alert and conscious, was taken to a hospital for treatment. Preliminary investigation shows the man was shot by a suspect driving a gray Dodge Challenger, police said.

Atlanta police tell CNN they are investigating the shooting as a drive-by.

"If you call 911, an officer will respond," interim Atlanta Police Chief Rodney Bryant said during a press conference Saturday afternoon.

He said he was addressing both "officers who serve the Atlanta Police Department and the community that we serve."

Bryant's comments come after three days of reports saying Atlanta police officers weren't showing up for their shifts in the wake of two officers being charged in the fatal shooting of Rayshard Brooks.

"It is factual that over the past few days, we've seen higher than average number of officers call in sick, which caused us to shift resources to ensure proper coverage ... The explanation for calling out sick varies and includes officers questioning their training, officers being challenged and attacked, and unease about officers seeing their colleague criminally charged so quickly ... Neither APD leadership nor the administration are dismissive of these notions. I want each of you to know that we are in this together and we are here to support you," Bryant said.

Bryant added that "over the past few days we stretched our resources to address demonstrators, simultaneously responding to 911 calls. This volume of activity can be taxing on any department. We have the largest police department in the state and have the resources to ensure safety."

R&B Singer Trey Songz is hosting a three-day fundraiser in his hometown of Petersburg, Virginia, which is south of Richmond, according to CNN affiliate WRIC-TV.

Songz hosted a candlelight vigil Friday in Richmond. On Saturday, he held the "Feed the City Challenge," a food drive in Petersburg to help feed those affected by Covid-19. Saturday's event also provided groceries and essential PPE to community members via a non-contact drive-thru, according to a city of Petersburg news release.

Rapper Pusha T, who is from Virginia Beach, attended Saturday's event in Petersburg.

"I don't know how in this regard for me to stay kind of above that as a statesman in this other than finding myself as a really angry citizen," Walz said. "That is just irresponsible and malpractice of what should have happened here."

Walz said he'll own his share of the blame for why the bill wasn't passed, but he is still there to get the deal done while others have gone home.

The governor said that he felt that relationships were being repaired before the bill failed.

"I have to tell you I question how serious it was to reach some type of deal," Walz said.

Walz said he is worried that the public will be mad that the bill wasn't finished and urged his counterparts to "come back to this Capitol and we'll decide on this."

North Carolina Gov. Roy Cooper ordered that all Confederate monuments on capitol grounds be removed to protect public safety, according to a statement released by his office on Saturday.

“I am concerned about the dangerous efforts to pull down and carry off large, heavy statues and the strong potential for violent clashes at the site,” Cooper said. "Monuments to white supremacy don’t belong in places of allegiance, and it’s past time that these painful memorials be moved in a legal, safe way."