The Southeastern Conference (SEC) is calling for the state of Mississippi to change its flag saying it wants student-athletes to be able to compete in an inclusive environment.

“It is past time for change to be made to the flag of the State of Mississippi. Our students deserve an opportunity to learn and compete in environment that are inclusive and welcoming to all," Southeastern Conference Commissioner Greg Sankey said in a statement.

“In the event there is no change, there will be consideration of precluding Southeastern Conference championship events from being conducted in the State of Mississippi until the state flag is changed," the statement added.

The University of Mississippi and Mississippi State are both members of the Southeastern Conference.

Colgate has announced a review of its toothpaste brand Darlie, which once featured a smiling White man in blackface, as companies around the world reconsider their use of racist stereotypes following the killing of George Floyd.

The popular brand, which is sold in China, the Philippines, Thailand and other Asian countries, has long been criticized for using racist imagery. The brand is marketed in Chinese as "Black Person Toothpaste" and was sold using the racial epithet Darkie until its name was changed in 1989.

Darlie is the top brand by market share in China, according to Colgate-Palmolive. The brand — whose logo is still of a man in a top hat and tuxedo, though he is meant to be racially ambiguous — is under review.

"For more than 35 years, we have been working together to evolve the brand, including substantial changes to the name, logo and packaging. We are currently working with our partner to review and further evolve all aspects of the brand, including the brand name," the company said in a statement to Reuters.

The company did not respond to a request for comment outside of regular office hours. It linked to the Reuters report from its official Twitter account.

Protests have erupted around the world following the killing of Floyd, an unarmed Black man, by a White police officer in Minneapolis, Minnesota. The campaign against racial injustice has also sparked a reckoning in the corporate world, with some firms choosing to acknowledge the racist roots of their business. 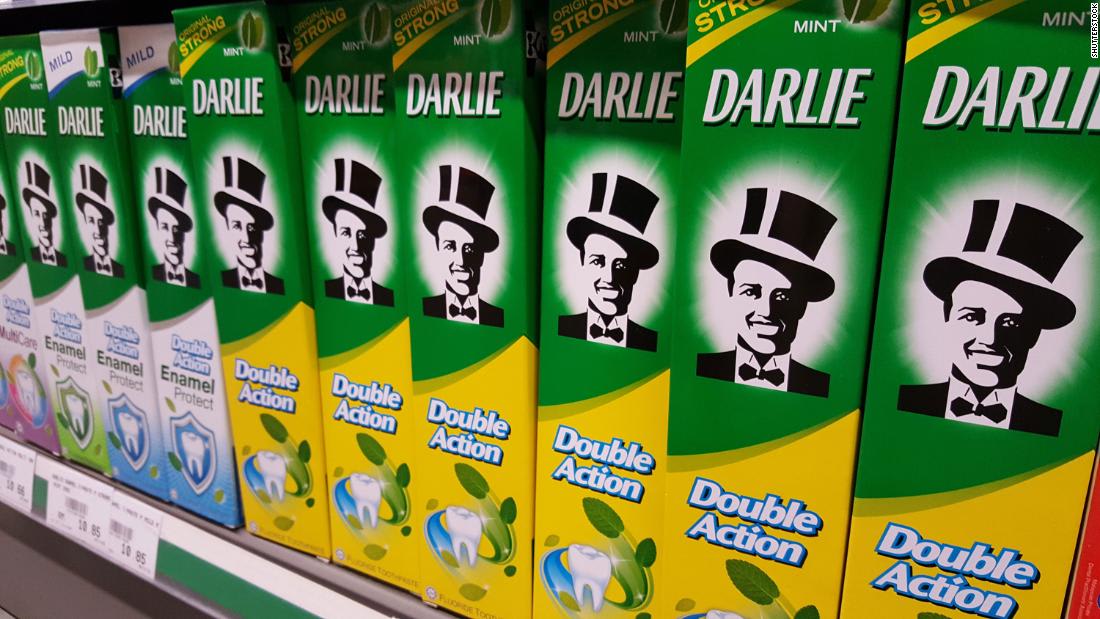 England's rugby union authority is reviewing the use of the slave-era song "Swing Low, Sweet Chariot" as a chant by fans, saying many may not be aware of its "historical context."

The Rugby Football Union (RFU) did not immediately respond to CNN but in a statement released to British media the organization said it was determined to "accelerate change and grow awareness," as the Black Lives Matter movement prompts corporations and institutions to rethink how they operate.

In recent weeks following George Floyd's death, a number of British organizations, such as the Bank of England, and businesses have been reviewing their historical associations with slavery.

"The RFU has stated we need to do more to achieve diversity and we are determined to accelerate change and grow awareness," the governing body said in a statement.

"The Swing Low, Sweet Chariot song has long been part of the culture of rugby and is sung by many who have no awareness of its origins or its sensitivities.

"We are reviewing its historical context and our role in educating fans to make informed decisions." 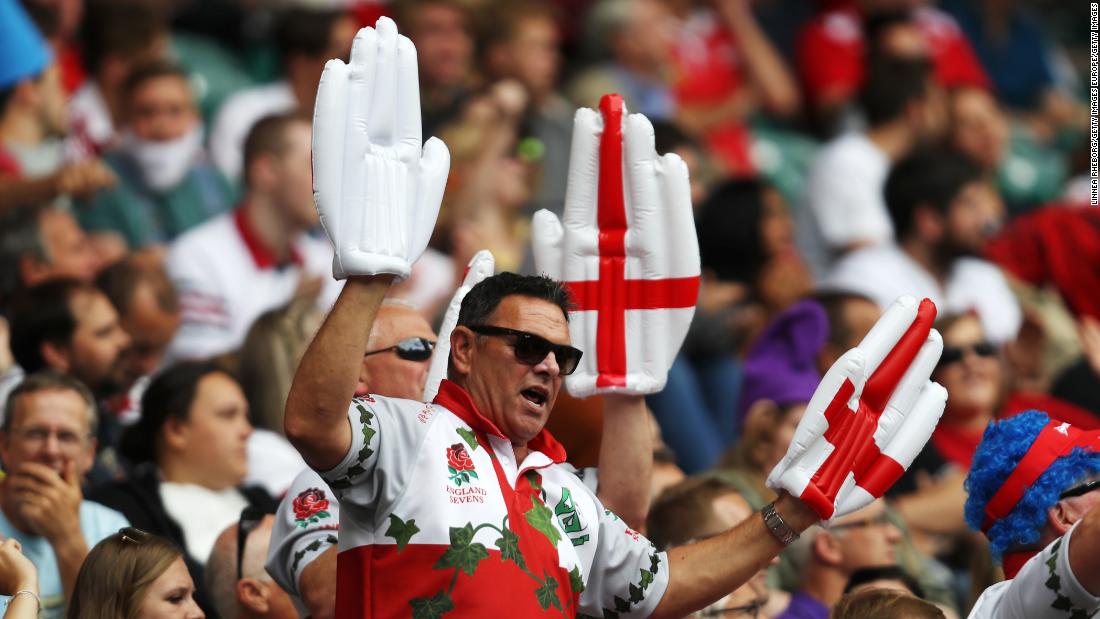 You might see another red, white and blue flag flying today over state capitols and city buildings in the United States.

That banner with a bursting star in the middle is the Juneteenth Flag, a symbolic representation of the end of slavery in the US.

The flag is the brainchild of activist Ben Haith, founder of the National Juneteenth Celebration Foundation (NJCF). Haith created the flag in 1997 with the help of collaborators, and Boston-based illustrator Lisa Jeanne Graf brought their vision to life.

The flag was revised in 2000 into the version we know today, according to the National Juneteenth Observation Foundation. Seven years later, the date "June 19, 1865" was added, commemorating the day that Union Army Maj. Gen. Gordon Granger rode into Galveston, Texas, and told enslaved African Americans of their emancipation.

For two decades now, communities around the country have held flag-raising ceremonies on Juneteenth in celebration of their freedom.

This country has so many aspects to it that are spiritual, and I believe this flag is of that nature," Haith said. "It (the idea for the design) just came through me."

Designing the flag and its symbols was a deliberate process and each element has meaning, Haith said.

The white star in the center of the flag, for example, has a dual purpose, representing Texas, the Lone Star State, and the freedom of African Americans in all 50 states. 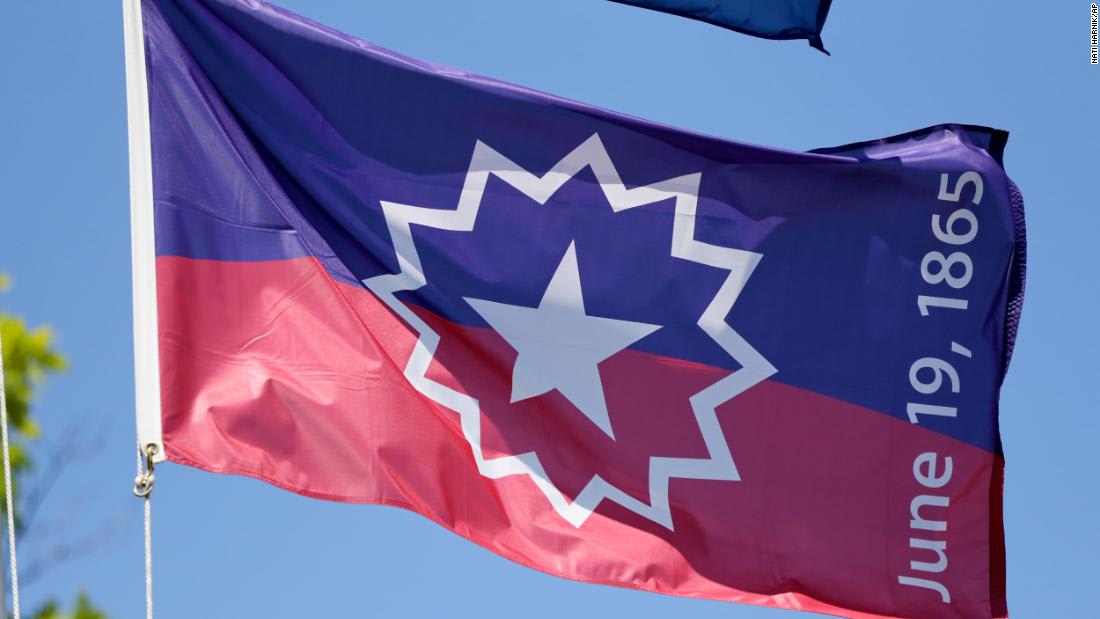 The Juneteenth flag is full of symbols. Here's what they mean

The Bank of England has issued an apology Friday regarding “some inexcusable connections” of former governors and directors to slavery.

“There can be no doubt that the eighteenth and nineteenth century slave trade was an unacceptable part of English history. As an institution, the Bank of England was never itself directly involved in the slave trade, but is aware of some inexcusable connections involving former Governors and Directors and apologises for them,” the British central bank said in a statement.

The bank says it has commenced “a thorough review of its collection of images of former Governors and Directors to ensure none with any such involvement in the slave trade remain on display anywhere in the Bank.”

It says it is also improving diversity and actively engaging with staff and particularly its Black, Asian and Minority Ethnic (BAME) employees, to become more inclusive.

Anti-racist protests continue to spread following the death of George Floyd, leading to calls to defund police departments and take down historic statues.

If you're just joining us, here are the latest developments.

Senior US State Department official resigns: Mary Elizabeth Taylor, assistant secretary of state for legislative affairs, is resigning from her post over President Donald Trump's response to the surge of protests against racial injustice and police brutality, The Washington Post reported.

Indictment in Cameron Lamb case: Jackson County grand jury has indicted Kansas City police officer Eric DeValkenaere in the fatal shooting of Cameron Lamb in December 2019. Lamb was shot while sitting in his pickup truck as he was backing into his garage. DeValkenaere is charged with involuntary manslaughter and armed criminal action.

Rayshard Brooks' viewing: The viewing will be held on June 22 at Atlanta's Ebenezer Baptist Church from 3 p.m. to 7 p.m. ET, according to information from the office of L. Chris Stewart Trial Attorneys. The viewing is open to the public.

New York City Council passes sweeping police reform bills: The package comes after a years-long battle for the bills to be voted on, some which have been in the works since the death of Eric Garner in 2014. The six bills include one that requires officers’ badge numbers to be visible, an official ban on chokeholds or any other maneuver that restricts blood or air flow and one requiring the NYPD to disclose how they use surveillance technology.

The testimony came at a virtual public hearing hosted by New York Attorney General Letitia James on Wednesday and Thursday. Stories of broken bones from baton strikes, agony from pepper spray and hours and hours in a holding cell while others wailed in pain took center stage.

"People have taken to the street because they are desperate to be heard. But more importantly, they really want to see change in their lifetime and they are demanding change," said James at the conclusion of the hearing on Thursday.
"They are tired of seeing Black men and women abused and who have died at the hands of those who are supposed to protect them and I want them to know that I hear them and I hear every person that came before us."

Ivonne Rayo said she held her hands up to show officers she wasn't a threat during a protest in Brooklyn.

"I was hit with a baton on my left arm right above the elbow," Rayo said. "We were unarmed peaceful protesters and did not warrant this hate and brutality from the NYPD. We were standing up for the victims of police brutality at the hands of the police and specifically, the NYPD." 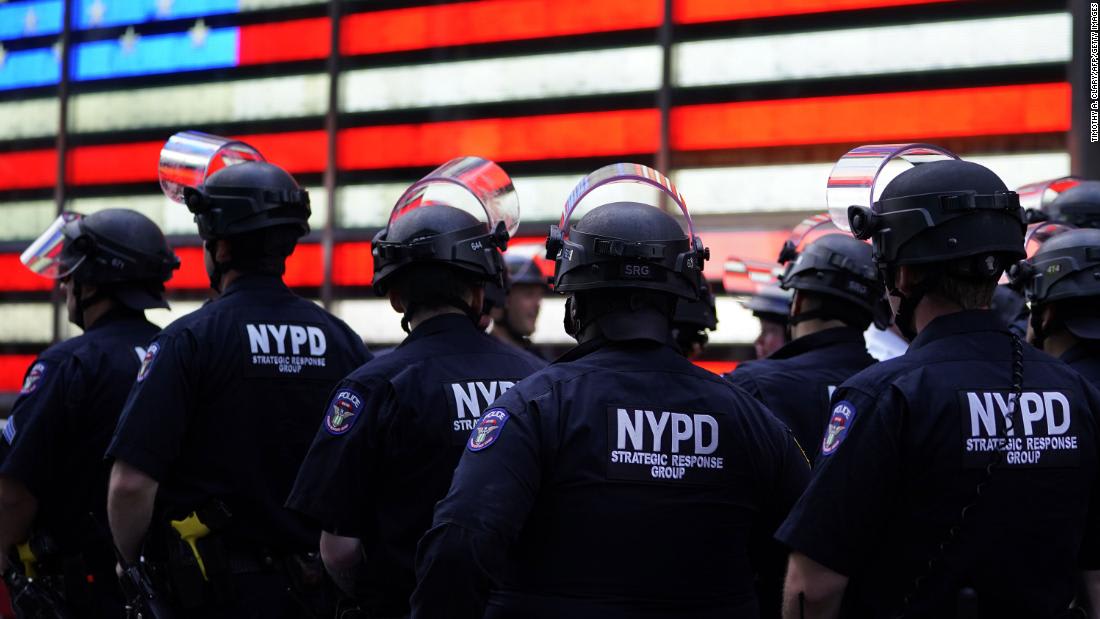 A crowd gathered in the Atlanta suburb of Decatur to watch the removal of a Confederate monument -- the latest controversial symbol toppled in the wake of the George Floyd protests.

A judge last week ordered the relocation of the 30-foot obelisk at Decatur Square after the city argued it'd become a threat to public safety during recent protests.

As a large crane pulled down the obelisk just before midnight Thursday, people chanted, "Take it down! Take it down!" Others applauded.

Others statues removed this month include:

Other states removed controversial statues last month, including a 115-year-old monument yanked down during a protest in Birmingham, Alabama. 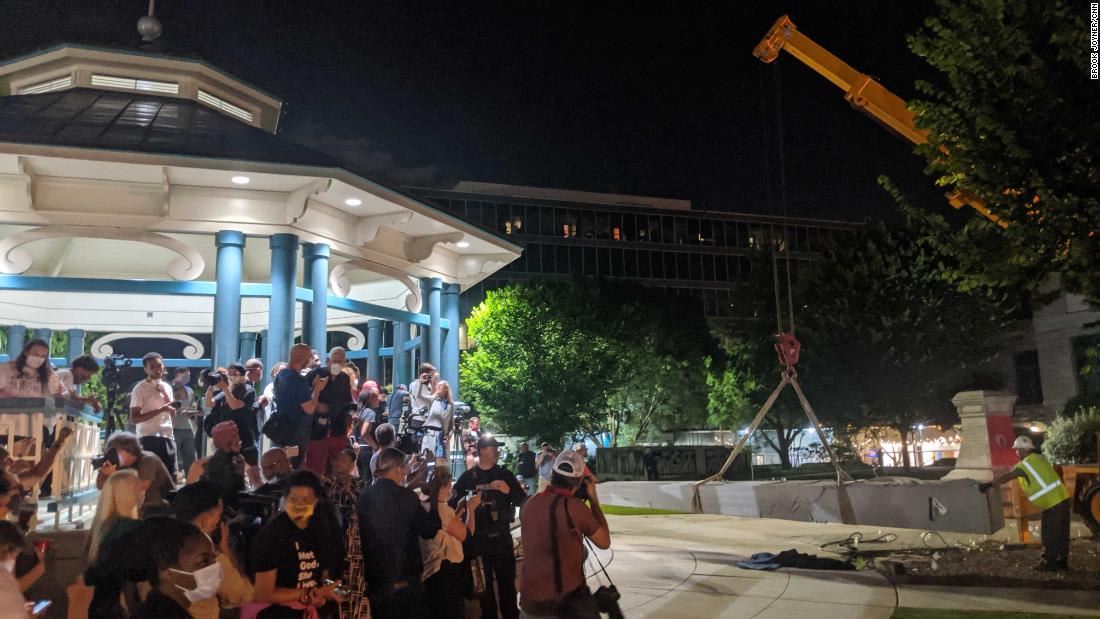 The soundtrack of American politics is now animated by demonstrations across the country, with anger toward President Donald Trump resonating far louder than admiration for former Vice President Joe Biden.

Mariah Smith, 28, has been marching. And come November, she said she will be voting.

In Milwaukee, one of the nation's most segregated cities, a summer of unrest is now part of the presidential race that will test the degree to which protesters have awakened a political movement.

Trump carried Wisconsin by only 23,000 voters in 2016, with a substantial decline in turnout among black voters from the 2012 re-election of President Barack Obama.

With tributes to Floyd and Taylor painted across the city -- along with murals and signs calling for peace and justice -- there are some signs of change here.

In April, Democrat David Crowley was elected as Milwaukee County Executive. At 34, he's the youngest and first African American to hold the top job in the county's 185-year history. It's the same office once held by Scott Walker, who went onto become a two-term Republican governor.

"We have had a fire under fire under our belly for the past four years. And thinking about Wisconsin and how the President won with just 20,000 votes, we have to do better," Crowley said in an interview. 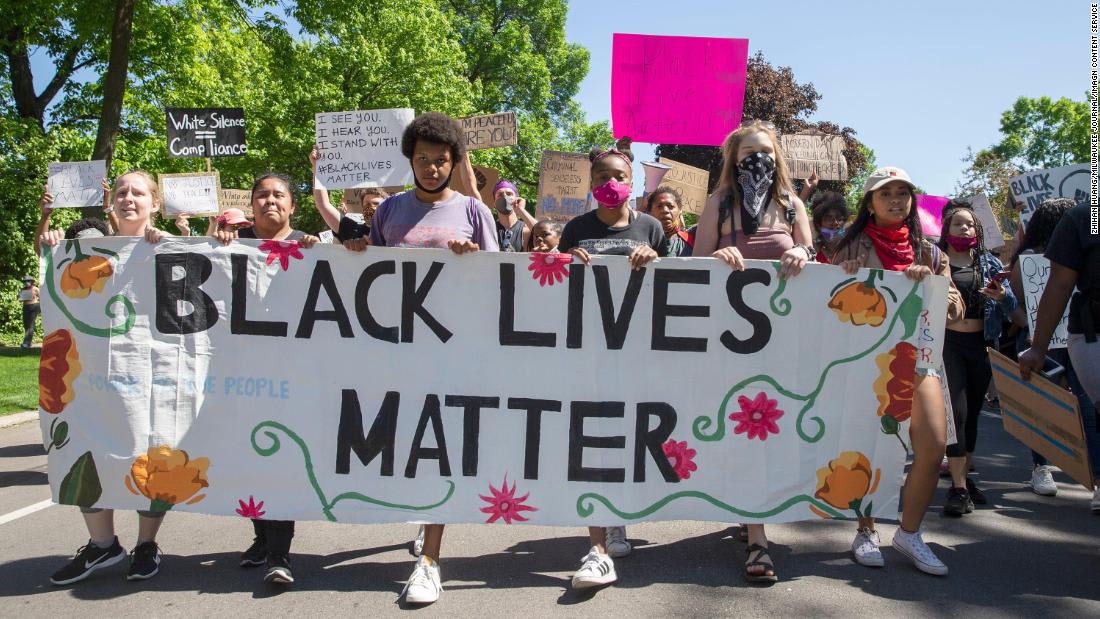 A summer of protests awakens a political movement animated against Trump