In an interview with MSNBC following his release on bond Thursday, Atlanta police officer Devin Brosnan said he's "looking forward to cooperating with any investigators who are interested in having a conversation about what happened that night."

Brosnan was booked and released Thursday before the interview.

"I have full faith in the criminal justice system," Brosnan said, adding that the booking process was quickly completed.

Brosnan's attorney Don Samuel told MSNBC that there "seems to be misunderstanding on the prosecutors' part."

"He's a defendant, he's not going to answer the DA's questions while they bring false charges against him," Samuel said.

Samuel said Brosnan has been fully cooperative with all investigators and plans on meeting with the Georgia Bureau of Investigation next week.

Asked if Brosnan had anything he wanted to say to the family of Rayshard Brooks, he said, "I think this is a tragic event."

"It's a total tragedy that a man had to lose his life that night," he added.

Brosnan said during his initial encounter with Brooks, he thought he was "friendly, respectful."

"I felt like he was potentially someone that needed my help. And I was really just there to see what I could do to make sure that he was safe," Brosnan said.

The Southeastern Conference (SEC) is calling for the state of Mississippi to change its flag saying it wants student-athletes to be able to compete in an inclusive environment.

“It is past time for change to be made to the flag of the State of Mississippi. Our students deserve an opportunity to learn and compete in environment that are inclusive and welcoming to all," Southeastern Conference Commissioner Greg Sankey said in a statement.

“In the event there is no change, there will be consideration of precluding Southeastern Conference championship events from being conducted in the State of Mississippi until the state flag is changed," the statement added.

The University of Mississippi and Mississippi State are both members of the Southeastern Conference. 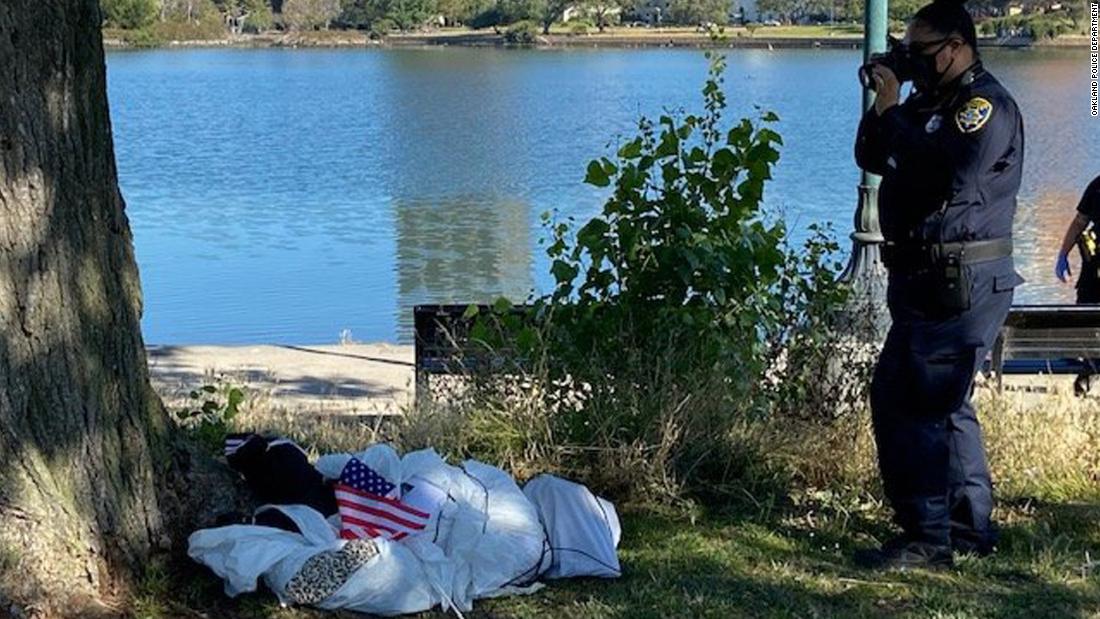 The effigy was found hanging in a tree near Lake Merritt on Thursday morning by a resident, according to a statement from the Oakland Police Department. The resident removed the effigy from the tree and called police, the statement said.

Police officers found "material stuffed in the shape of a human body with a rope tied around the torso and neck, laying on the ground next to a tree with an American flag lying next to it," the statement said.

Some context: The effigy was found a day after a hate crime investigation was opened into nooses found on trees in Oakland, California, according to police.

The FBI is investigating the effigy as a hate crime, Schaaf said.

California Attorney General Xavier Becerra weighed in on the incident, calling it "chilling."

"I've got to tell you it doesn't help circumstances. Everyone's on edge. There are a lot of people who are very frightened. A lot of people are courageous and peacefully protesting. To see these things just doesn't help," he told CNN on Thursday.

The California Attorney General's office is investigating the death of a 24-year-old black man who was found hanging from a tree in northern Los Angeles County.

The Fulton County Court of Clerks office said at this point, no court proceedings have been scheduled for the case.

Fulton County District Attorney Paul Howard said Wednesday that it is unlikely the case would be presented to a grand jury before January.

Some background: Rolfe faces felony murder and 10 other charges after he shot Brooks at a Wendy's drive-thru last week. Prosecutors allege that he declared, "I got him" after firing the shots and he did not provide medical attention for two minutes and 12 seconds.

Rolfe is facing 11 charges including felony murder in the death of Rayshard Brooks, Howard said during a news conference Wednesday. Brosnan, who is currently on administrative duty, faces three charges including aggravated assault.

"My view is if they didn't know we were gonna make a statement, they would be some of the few people in the country who didn't know about it because we certainly announced it to everybody else," Howard told CNN Thursday.

Howard said he was "mystified that they released the statement about us not consulting with them."

"I really don't see the purpose of it, and the district attorney is the person who makes the decision as to whether or not the case goes forward, and that's what we did on yesterday," Howard added.

Rayshard Brooks' viewing will be held on June 22 at Atlanta's Ebenezer Baptist Church.

The viewing will be from 3 p.m. to 7 p.m. ET, according to information from the office of L. Chris Stewart Trial Attorneys.

The viewing is open to the public, however no cameras will be allowed inside. Social distancing guidelines will be followed and masks will be required.

Social distancing guidelines will be followed and masks will be required.

Fulton County District Attorney Paul Howard told CNN’s Wolf Blitzer today that they are "not asking for the death penalty" in the case against a former Atlanta police officer who is charged in the fatal shooting of Rayshard Brooks.

"We simply cited that because statutorily, that is one of the possible sentences, but we're not seeking the death penalty. I don't think anyone rationally expected that we would ask for the death penalty in this case," he said.

Asked about critics saying he overcharged the officers at the center of Brooks' death, Howard said, “That’s just not true. What we did is we charged based up on the facts.”

Vince Champion, the Southeast regional director of the International Brotherhood of Police Officers, told CNN that “the union specifically” has received death threats over the past couple of days.

One of the threats warned that to be "very careful because we know where your office is,” Champion said while describing the threats.

Champion said he's been in law enforcement for "30 years, so I'm used to getting death threats but my employees are not."

"Some of my employees who are law enforcement, you know, dealt with some kind of similar stuff, but others are just, you know, everyday people trying to do a job. They shouldn't have to go through this," Champion added.

Fulton County District Attorney Paul Howard says he's "received some threats" following charges he made Wednesday against the two Atlanta police officers at the center of the Rayshard Brooks case.

"The threats seem to be racially-based. What I was saying is if you look historically at the deaths that I referred to earlier, the deaths that we've seen recently, there's certainly a racial connection. That same connection is evident in some of the threats that I received. I can say to those people who are threatening me in my office, we won't be intimidated," Howard told CNN Thursday afternoon.

Howard said he and his office will "continue to do what we think is right."

On Wednesday: Howard announced the charges filed against the police officers involved in the shooting of Brooks in a Wendy's parking lot in Atlanta.