Our live coverage has ended. You can read the latest on the severe weather here.

The severe weather threat in the South won't end tonight. The storm system over the Plains will make its trek toward the East Coast, fueling the risk for severe weather from the Gulf Coast through the eastern Great Lakes on Tuesday.

This puts Mississippi back at risk for tornadoes, but tornadoes could especially be possible in parts of Louisiana, Alabama and Tennessee as well, where there is a level 3 out of 5 severe weather risk.

"Large hail, damaging wind gusts and a few tornadoes will be likely along with rainfall rates in excess of an inch per hour," said the National Weather Service office in Jackson, Mississippi.

Rounds of thunderstorms and rain showers will traverse across the Ohio and Tennessee River Valleys throughout the day tomorrow. Farther south, scattered storms will likely develop midday from eastern Texas through Georgia.

The risk for severe weather will ramp up during the afternoon and evening hours. In addition to the storms in the Gulf Coast states, some of which will turn severe, a final line or two of strong storms will likely track east from the coast through the Ohio River Valley through Tuesday night.

Flash flooding will be possible across the South thanks to the combination of heavy rainfall and all the rain that has fallen in recent days and weeks. A widespread 1-3 inches of rain is forecast across this region into Tuesday night.

This line of storms should weaken by Wednesday morning as it approaches the East Coast of the US, but isolated severe weather will remain possible.

Follow the latest on the severe weather at cnn.com/weather.

A more volatile combination of tornado-producing ingredients is coming together across Texas and Oklahoma.

Severe weather will ramp up this evening and overnight tonight in the Southern Plains.

This severe storm risk has increased since this morning thanks to the warm air staying in place for a longer time: “The culprit is this cold front being 6 hours slower. Now a more volatile combo of instability and lift occurs over us,” National Weather Service in Fort Worth said in a tweet.

This region has been dry throughout the day, allowing for temperatures to rise into the 80s across northeastern Texas and southeastern Oklahoma. This heat, in addition to the high humidity, are two important ingredients needed for severe weather, and it’s this region where the Storm Prediction Center is most concerned for tornadoes. 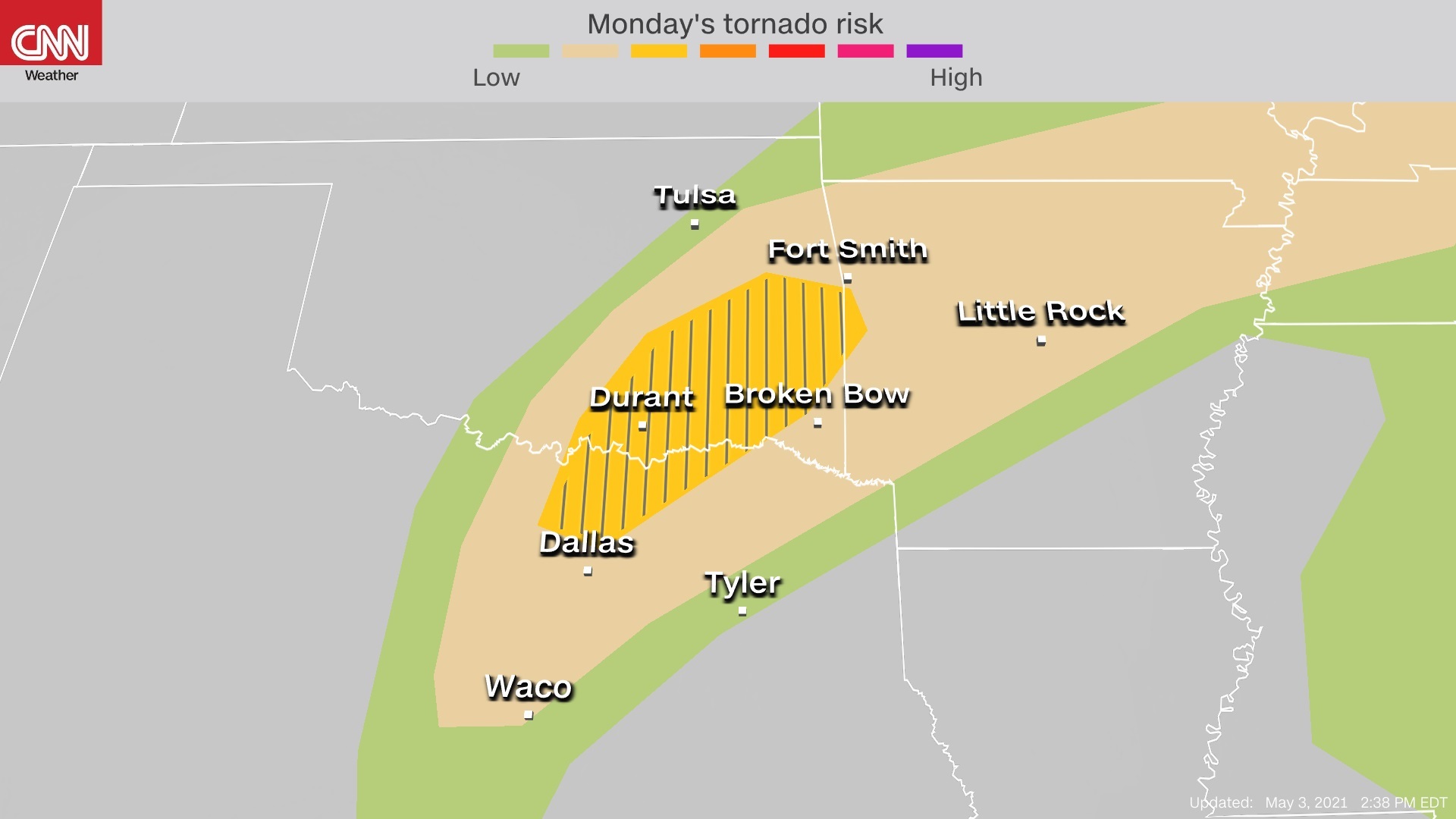 Thunderstorms will develop after 4 p.m. CT this afternoon, and they will become more widespread after sunset this evening. Some of these storms will be supercells, which are storms that spin and are more likely to produce tornadoes.

Cities like Dallas, Fort Worth and Arlington in Texas and Durant and Broken Bow in Oklahoma will be under threat by these storms.

A new tornado watch is in effect until 7 p.m. EDT for east-central Georgia, central South Carolina and south-central North Carolina. 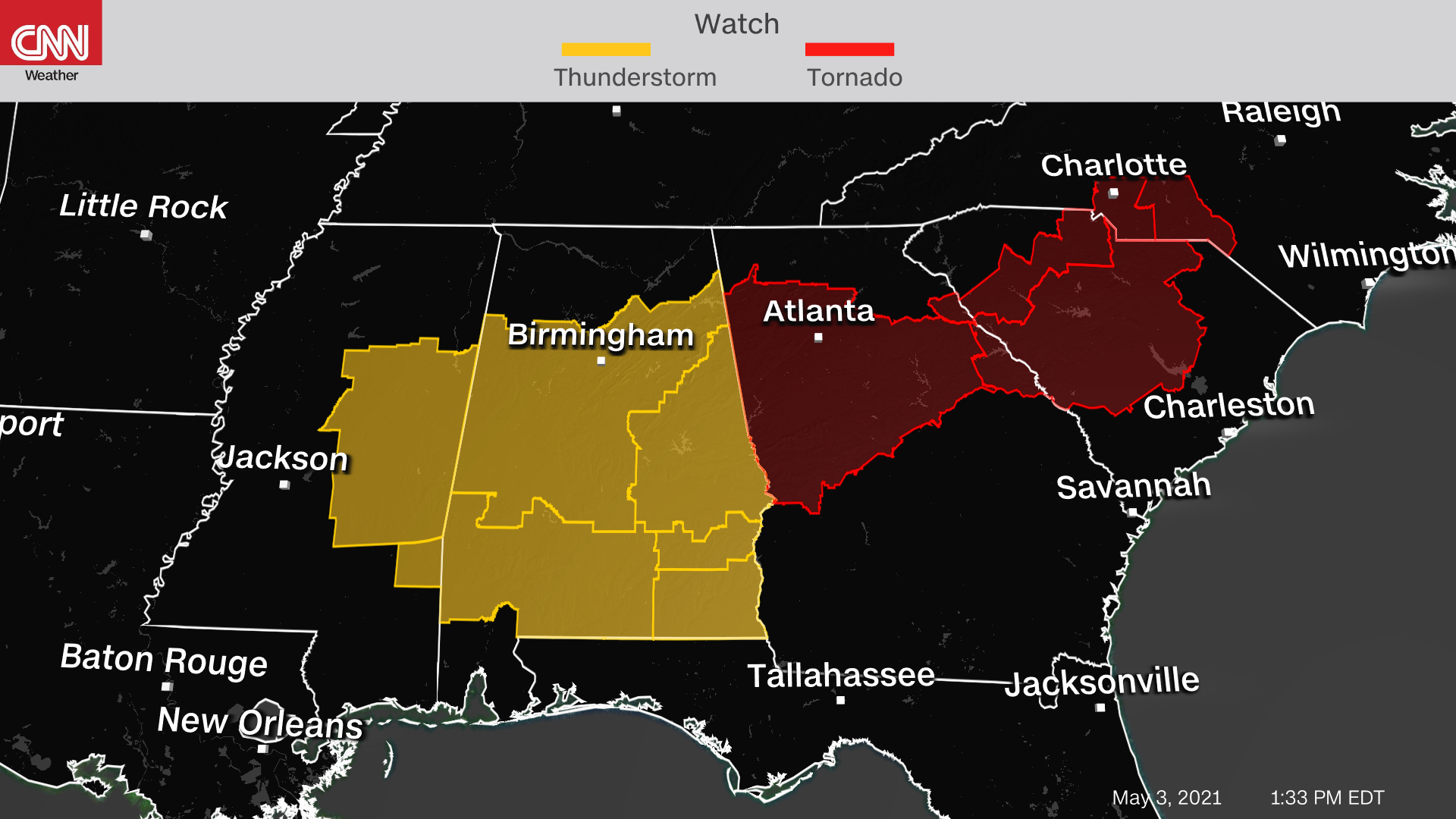 This includes Charlotte and Rockingham in North Carolina, and Columbia and Greenwood in South Carolina and Augusta in Georgia.

A couple of tornadoes are possible with the thunderstorms this afternoon, in addition to the risk for large hail up to the size of quarters and isolated wind gusts up to 70 mph, according to the Storm Prediction Center.

A tornado watch continues to cover central Georgia until 4 p.m ET. And a thunderstorm watch blankets some of central Mississippi and much of Alabama until 9 p.m. ET.

The National Weather Service says parts of North Carolina, including Charlotte, are now under a tornado warning.

This warning comes after one in Atlanta this morning.

While the Atlanta-area warning has been lifted, a tornado watch is still in effect for the entire metro-Atlanta area, as well as much of west-central Georgia and portions of eastern Alabama until 4 p.m. ET.

A flash flood warning has now in effect for parts of northern Georgia, including the Atlanta metroplex.

"Flash flooding is ongoing or expected to begin shortly," according to the National Weather Service office in Atlanta.

Rainfall totals of 1 to 2 inches have already fallen across the region this morning, and an additional 1 to 2 inches of rain is forecast with more storms through the afternoon. 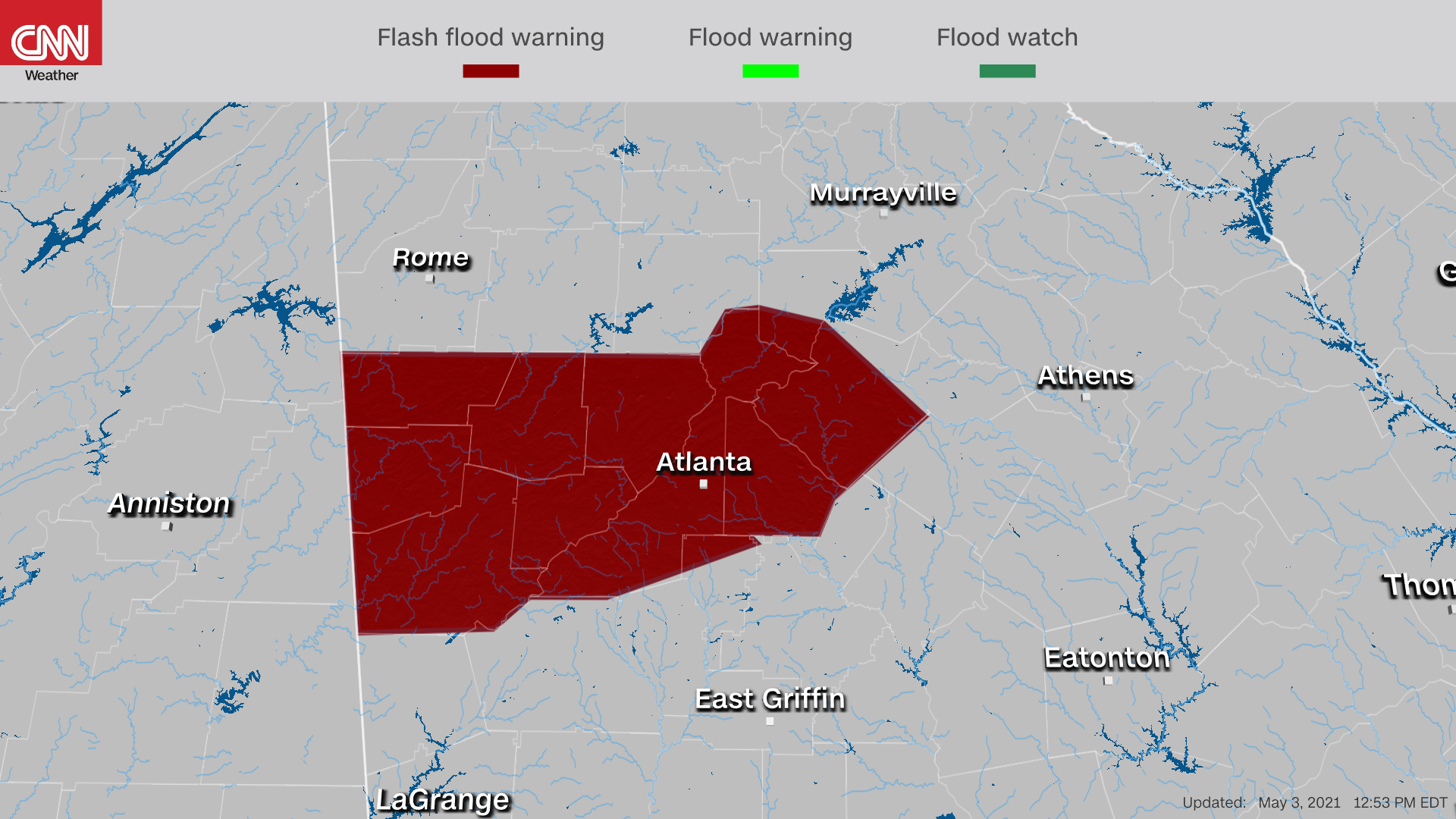 The tornado warning for the radar-confirmed tornado in the Atlanta area expired earlier this morning, but a tornado watch is still in effect for the entire metro-Atlanta area, as well as much of west-central Georgia and portions of eastern Alabama, until 4 p.m. ET.

The Storm Prediction Center and local National Weather Service offices closely monitor developing thunderstorms and issue a watch or warning if the storm warrants an alert.

Tornado watch: A tornado watch is issued by the Storm Prediction Center. It means that conditions are favorable for a potential tornado. "This highlights an area and usually alerts for the next four to six hours where risk is increasing," said Bill Bunting, chief of forecast operations at the prediction center.

If a tornado watch is issued, you should have your supplies, choose a safe place and have a plan in place — just in case a tornado develops. This does not mean there is a tornado. This only means to be on watch and stay informed about the weather in your area in case things intensify.

Tornado warning: A tornado warning means a tornado has been sighted, or that there is a strong indication on radar that a tornado is in progress. "When a particular area (is) under an immediate risk, then the local office will issue a warning and that's the call to action," said Bunting.

If a tornado warning is issued for your area, you should immediately seek shelter and get to your safe place until the tornado threat has passed. This means a tornado is imminent.

Atlanta Mayor Keisha Lance Bottoms tweeted that trees are down in her neighborhood following this morning's radar-confirmed tornado.

While the warning has been lifted, a tornado watch is still in effect for the entire metro-Atlanta area, as well as much of west-central Georgia and portions of eastern Alabama until 4 p.m. ET.

"Please be careful Atlanta," she tweeted alongside photos of some of the debris.

The Portland Trailblazers basketball team tweeted that they evacuated during this morning's tornado warning in Atlanta. The Trailblazers are in town to face the Atlanta Hawks tonight.

See the photos from their evacuation:

Parts of Atlanta were briefly put under a tornado warning this morning for a radar-confirmed tornado.

While that warning has been lifted, a tornado watch is still in effect for the entire metro-Atlanta area, as well as much of west-central Georgia and portions of eastern Alabama until 4 p.m. ET.

And much more of the Southeast is at risk of severe weather today.

The greatest risk for severe weather through tonight will be from Oklahoma through Indiana, where there is a level 3 out of 5, enhanced risk, according to the Storm Prediction Center. This includes Louisville and Evansville in Indiana and Fort Smith, Fayetteville and Jonesboro in Arkansas.

This region has the best chance for seeing a tornado and damaging winds, but large hail is also a threat, especially in northern portions of Texas and eastern Oklahoma.

Showers and storms Monday morning will exit the Ohio River Valley by midday, while the southern Plains remain dry most of the day.

By late afternoon, quickly moving thunderstorms will begin to form and they will persist into the night. Some of these storms are forecast to be supercells, which spin and can produce tornadoes. This tornado threat will continue into Monday night.

Here's a look at the areas at risk of severe weather: 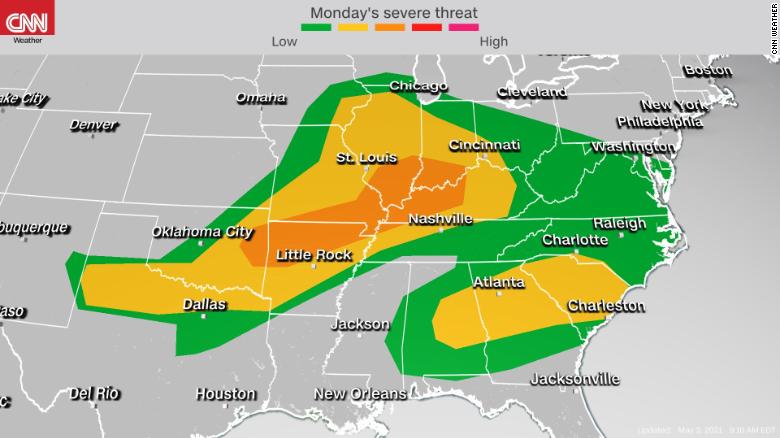