The latest on the deadly Astroworld crowd surge 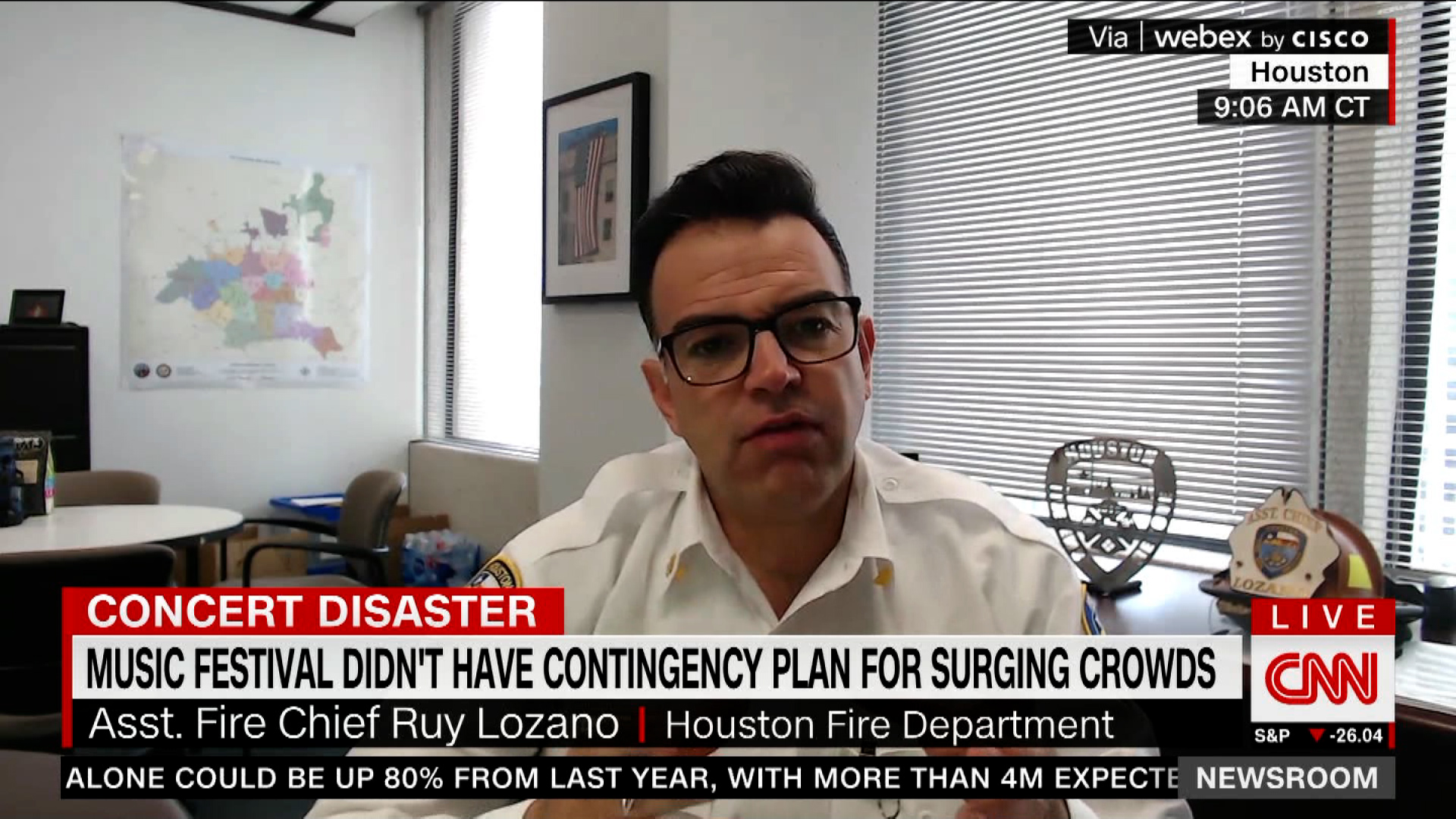 Houston Fire Department Assistant Fire Chief Ruy Lozano said that letting Travis Scott know what the situation was could have helped, since he had “the largest microphone in the venue."

In an interview with CNN Tuesday, Lozano mirrored what Houston Fire Chief Samuel Peña said previously of the Astroworld incident.

“I agree with the fire chief, letting the artist know the situation and saying that he has the largest microphone in the venue, it may have helped,” Lozano said.

While Lozano added he could not “definitely say” if it would have changed the outcome, having the artist “involved” could have made a difference.

“Because the concentration was up against the stage, having that large microphone, explaining to the crowd and hopefully, and that is hope, that the crowd would listen," he said.

Lozano said a way to do things differently in the future is to hold concerts in a “traditional brick-and-mortar venue” which keeps the crowds compartmentalized and doesn’t allow for someone at the back of the venue to surge to the front of the venue.

At least 18 lawsuits related to the Astroworld festival had been filed by Monday evening in Harris County District Court in Texas.

Event organizer Live Nation Entertainment was named as a defendant in all but one of the suits, while Travis Scott was named in most. Other people and organizations involved in the concert, including NRG Stadium as well as actor and musician Drake, were named in at least one of the suits.

"The injuries have had a serious effect on the Plaintiff's health and well-being. Some of the effects are permanent and will abide with the Plaintiff for a long time into the future, if not for his entire life," one of the lawsuits stated.

Other lawsuits allege serious injuries from being "trampled" during the crowd crush as well as "emotional distress."

The lawsuit in which Drake is named accuses him of helping to incite the crowd as the "surprise guest" alongside Scott, both of whom stayed on stage as "the crowd became out of control," the suit says.

Drake posted Monday on social media: "My heart is broken for the families and friends of those who lost their lives and for anyone who is suffering. I will continue to pray for all of them, and will be of service in any way I can."

Scott tweeted on Saturday: "I'm absolutely devastated by what took place last night. My prayers go out to the families and all those impacted by what happened at Astroworld Festival."

NRG told CNN in a statement it is unable to comment at this time. CNN has reached out to Scott, Live Nation and others named in the suits.

Three people who were injured at the Astroworld Festival over the weekend are still in the hospital, Houston Fire Chief Samuel Peña told CNN. Two of those people are in critical condition.

Eight people were killed and dozens more were injured at the Astroworld Festival in Houston on Friday night.

One of those severely hurt Friday was a 9-year-old boy who's in a medically induced coma, his grandfather said.

Drake is speaking out for the first time since the Astroworld Festival in Houston which resulted in the deaths of eight concertgoers.

He took to Instagram and wrote, "I've spent the past few days trying to wrap my mind around this devastating tragedy. I hate resorting to this platform to express an emotion as delicate as grief but this is where I find myself," he wrote.

"My heart is broken for the families and friends of those who lost their lives and for anyone who is suffering. I will continue to pray for all of them, and will be of service in any way I can. May God be with you all."

Drake had performed at the festival on Friday, which over 50,000 fans attended.

Travis Scott, the music festival's founder, said on Monday that he will cover all funeral costs for the eight victims who died. Separately, organizers of Astroworld will provide a full refund to all ticket holders – both those who attended Friday and those who held tickets for Saturday's canceled events.

Several individuals who were injured at the event are still in the hospital, including a 9-year-old boy who is currently in a medically-induced coma, his family says.

A nine-year-old boy who was seriously injured at the Astroworld Festival on Friday night is in a medically induced coma in an attempt to combat his brain trauma, according to the boy's grandfather, Bernon Blount.

Blount told CNN that his grandson, Ezra Blount, who was in town to see "his favorite artist," attended the concert with his father, Treston Blount.

"When my son went to the concert, he had my grandson on his shoulder," Blount said. "All the people pushed in and he could not breathe so he ended up passing out because of all the pressure that was being applied to his body. And when he passed out, Ezra fell off his shoulder and fell into the crowd," he said.

Blount said that when his son came to, "they had already taken Ezra to the hospital as a John Doe. They did not know anything about him, his name or anything because he got separated from my son."

When the father regained consciousness, "instead of being seen or getting himself checked out, he went and tried to find Ezra and ended up finding him at the Texas Children's hospital," according to Blount.

The nine-year-old child had cardiac arrest during the concert, according to the grandfather.

"During the event at the concert, he had cardiac arrest, which damaged his heart," he said. "He has damage to the liver, his lungs ... and on top of that, he has swelling on his brain," Blount said. CNN has not been able to independently confirm Ezra's medical status with the hospital.

The family is "devastated, because this was supposed to be a father-son outing for them to bond and it has turned into something horrible and tragic," according to Blount.

"There needs to be accountability, not just from the artist or the event planners, but also from the city of Houston," Blount added.

Ezra Blount's parents have retained attorneys Ben Crump and Alex and Bob Hilliard, according to a news release by the attorney's office.

Here's what we know about the eight people who died at the Astroworld Festival in Houston on Friday night:

Memorial High School Principal Lisa Weir sent a letter Saturday to parents at the school, informing them of the death.

"We are deeply saddened to inform you that a male ninth grade student died ... in an incident at the Astroworld Festival. Our hearts go out to the student's family and to his friends and our staff at Memorial. This is a terrible loss, and the entire MHS family is grieving today," Weir's letter reads.

Brianna was a junior at Heights High School in Houston, according to a verified GoFundMe account established by her family.

"Dancing was her passion and now she's dancing her way to heaven's pearly gates," the fundraising post says.

Patino, a senior at the University of Dayton, was studying mechanical engineering technology and human movement biomechanics, according to a statement from the university.

He was a member of Alpha Psi Lambda, a Hispanic-interest fraternity, the statement said, and was originally from Naperville, Illinois.

"He was loved by so many because of the loyal, loving, selfless, protective, funny, and caring person he was," his family said in a statement. "Even though he was a hardworking individual, he would always try to make time for his family and the people he cared about. We will miss the big heart Franco had and his passion for helping others."

Baig, from Euless, Texas, died trying to save his fiancée, who was getting stomped on and hit in the crowd surge at the concert, his brother Basil Baig told CNN Sunday.

His family said he was an amazing person who loved with all his heart.

"People would admire him for who he was," Basil Baig told CNN.

Basil Baig said his brother's fiancée survived but is bruised all over her body and is traumatized.

In the release, SIU Chancellor Austin Lane said Jurinek "was a creative, intelligent young man, with a promising career in journalism and advertising."

Peña lived in Laredo, Texas and studied at Laredo College, according to his Facebook page.

"I am starting a go fund me for my youngest brother (Rodolfo Angel Peña)'s passing please donate out of heart anything is great," the online fundraising post reads.

Peña was 23, according to CNN affiliate KTRK, which spoke with his sister.

Acosta was a junior at Western Washington University and had an interest in computer science, according to the university. He was from Tieton, Washington.

His brother Joel Acosta told CNN that Axel had turned 21 in October.

The student was at the event alone, his aunt Cynthia Acosta told CNN affiliate KTRK. "It was his first time going to an event like that," she told the Houston station.

According to Joel Acosta, the family last heard from his brother around 5 p.m. on Friday. On Saturday, the Harris County Medical Examiner's Office released a description and asked the public for help identifying the remains.

Dubiski, who was from Cypress, Texas, was listed by the Harris County Medical Examiner's Office as one of the people who died.