Rishi Sunak set to be UK's next prime minister

Rishi Sunak becoming Britain's prime minister is a “Barak Obama moment” for people of Indian descent in the UK, the president of the Hindu temple in the UK co-founded by Sunak’s grandparents in 1971 told CNN.

“It's a proud moment for us, definitely. Someone who belongs to the temple taking the highest post in the country as the prime minister of the United Kingdom,” Sanjay Chandarana, the president of the Vedic Society Hindu Temple in Southampton, told CNN.

“It’s a Barack Obama moment for us. A South Asian, Indian, origin prime minister in the UK. Everyone here is so thrilled to hear that news,” he added.

Rishi Sunak is set to become the first Hindu and person of color to become UK's prime minister. Sunak has spoken publicly about his British Indian heritage, telling the Business Standard in a 2015 interview that he ticks British Indian on the census.

"I am thoroughly British, this is my home and my country, but my religious and cultural heritage is Indian, my wife is Indian. I am open about being a Hindu,” Sunak told Business Standard.

The fireworks program at the temple to celebrate the Hindu festival of Diwali on Monday has been extended to 20 minutes from initial 12 to 15 minutes to mark Sunak's win.

“We have a festival within the festival going on at the moment,” Chandarana, the temple president, said.

He said that Sunak is a frequent visitor to the temple and he was there last in July, a few days before he resigned from the post of the Chancellor.

After it was announced that Sunak had won the race to be the Conservative Party leader, the main priest of the temple held a “special prayer” for Sunak.

The temple's president says he is certain that Sunak will visit the temple soon.

“His parents and relatives also come quite often. I’m looking at his aunt in front of me leaving the temple,” he chuckled.

Sunak’s grandparents were born in India and his parents emigrated to the UK from East Africa in the 1960s.

For two long months this summer, the British public watched Rishi Sunak and Liz Truss argue bitterly over the economy while setting out their pitch to a few thousand Conservative members to pick them as Britain’s next Prime Minister.

Sunak was victorious in a re-run of the leadership contest that was over before it began, seeing off Boris Johnson on Sunday and Penny Mordaunt earlier on Monday to finally enter Downing Street at the second time of asking.

It forced Truss into the ignominious position of having to publicly congratulate her former rival on succeeding her, just seven weeks after he accurately warned her plans would trash Britain’s economy.

And it marks a historic day for the country; Sunak is the first person of color, the first Hindu, and the youngest politician in two centuries to get the keys to Number 10.

But as the Conservative Party lays on a fanfare for its third leader since the leaves started falling from Westminster’s trees, it knows that Sunak represents a last chance to claw back some credibility with the British public.

Boris Johnson’s fall from grace — followed swiftly by Liz Truss’s 45-day nosedive into the footnotes of history — has left one of the world’s most successful political parties on the brink of rupturing.

Uniting the Conservative Party is Sunak’s first task if he wishes to avoid becoming another casualty of the unending Conservative psychodrama, and given the ill feeling towards him from many of Johnson’s allies, it may take some doing.

A harder challenge still for the ultra-rich former banker will be to stabilize Britain’s economy, and soothe the fears of families across the nation struggling through a cost of living crisis.

And he will be forced to bat away calls from day one for a general election, which have grown louder with each new Prime Minister.

Sunak’s rise to Number 10 has been meteoric. He will hope his stay there can be a lengthy one, but he has some difficult headwinds to weather first.

Rishi Sunak has given his first speech as Conservative Party leader, telling the party he is "humbled and honored" to win their support.

"I'd like to pay tribute to Liz Truss for her dedicated public service to the country," he said of the outgoing leader. "She has led with dignity and grace through a time of great change."

"It is the greatest privilege of my life to be able to serve the party I love, and to be able to give back to the country i owe so much to," Sunak said.

"The United Kingdom is a great country, but there is no doubt we face a profound economic challenge," he added. "We need stability and unity, and I will make it my utmost priority to bring our party and our country together."

"I pledge that I will serve you with integrity and humility ... I will work day in, day out to deliver for the British people," he concluded at the end of a very brief speech.

Rishi Sunak was the only person formally nominated to become the Conservative leader, meaning the planned week-long contest no longer needed to continue.

Instead, Sunak will spend Monday preparing to take over at Downing Street.

Charles will accept her resignation, and then welcome Sunak for a meeting and ask him to form a government.

We don't yet know whether those meetings will take place on Monday or on Tuesday.

Britain's King Charles III will be heading back to London from the private royal estate of Sandringham Monday afternoon, as had always been his plan, CNN understands. But each side may need an extra day until they're ready to go ahead with the handover of power.

Britain's King Charles III will be heading back to London from the private royal estate of Sandringham Monday afternoon, as had always been his plan, CNN understands.

CNN also understands that there has been no alteration to his schedule in light of this weekend’s events or today’s announcement.

It is not clear whether the King will host audiences at Buckingham Palace on Monday to accept the resignation of outgoing Prime Minister Liz Truss and appoint her successor Rishi Sunak, or whether that will happen later in the week.

Here's a tweet that Liz Truss didn't think she'd have to write seven weeks ago.

Truss, the outgoing and shortest-serving British prime minister, has congratulated Rishi Sunak on winning the race to replace her, less than two months after she defeated him in the year's first Conservative leadership contest.

In a short and muted statement, Truss said Sunak has her "full support."

Rishi Sunak, Britain’s third prime minister in seven weeks, will face the huge challenge of projecting stability after a period of historic political and financial market chaos. But his other task — shepherding the country through a recession — is poised to be just as daunting.

The pound rose against the US dollar as Sunak’s path to power cleared with the withdrawal of rival Boris Johnson earlier Monday, but was last down 0.2% to below $1.128. Yields on benchmark 10-year UK bonds, which move opposite prices, fell to 3.82%.

Sunak campaigned for the job over the summer with promises to help households tackle the rising cost of living, which is causing many to pull back spending. He said he would cut taxes, but only once price pressures eased.

Yet the economic outlook has deteriorated sharply since then — not least because of the market turmoil unleashed by Truss’ now-abandoned plan to slash taxes as soon as possible and boost government borrowing.

A closely watched gauge of economic activity dropped to a 21-month low in October. S&P Global, which tracks the data, said it effectively confirms the United Kingdom is in a recession.

“The heightened political and economic uncertainty has caused business activity to fall at a rate not seen since the global financial crisis in 2009, if pandemic lockdown months are excluded,” said Chris Williamson, chief business economist at S&P Global Market Intelligence.

As Truss’ disastrous tax cut plan proved, any economic stimulus beyond immediate support for energy bills could prove to be a nonstarter for Sunak.

“A key focus for the next Prime Minister and their chosen Chancellor needs to be fiscal responsibility,” Carl Emmerson, deputy director of the Institute for Fiscal Studies, said in a statement. “We need a credible plan to ensure that government debt can be expected to fall over the medium-term.” 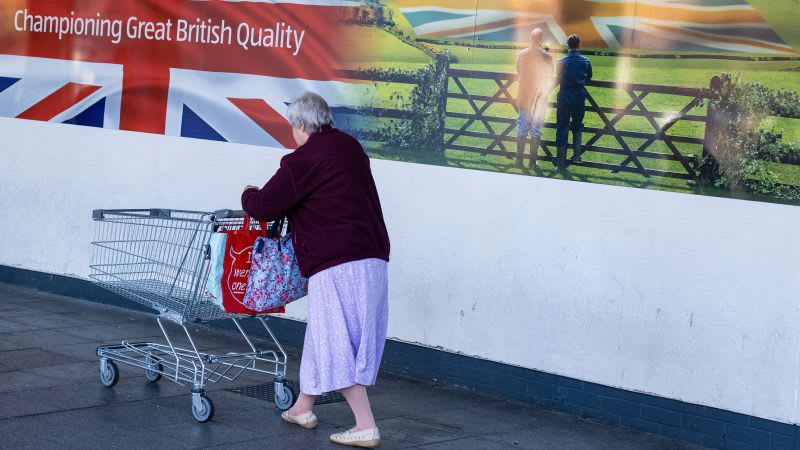 He will become the third person to lead the country in seven weeks, and the fifth since 2016.

It means yet more turnover at the heart of government -- Boris Johnson and Truss both frantically reshuffled their Cabinets as they fought to save their jobs, and Sunak will be expected to bring in his own team this week.

But Sunak will face immediate calls for a general election from opposition parties, who will demand he seeks his own mandate in order to govern with any authority.

Rishi Sunak will become the first Hindu and the first person of color to become Britain's Prime Minister.

At the age of 42, he is also the youngest person to take the office in more than 200 years.

The result of Monday's contest caps a spectacularly rapid rise to the pinnacle of British politics.

Sunak was first elected as an MP in 2015 and spent two years on the backbenches, during which Brexit dominated the political agenda. Sunak supported leaving the EU during the 2016 referendum.

He subsequently became a junior minister in Theresa May's government. It was Boris Johnson who gave Sunak his first major government role when he first appointed him as the Chief Secretary to the Treasury in 2019, and as the Chancellor in 2020.

Sunak won popularity during the early weeks of the pandemic when he unveiled an extensive support plan for those unable to work during lockdown.

But the "Partygate" scandal that took down Boris Johnson also tarnished his reputation, and he became archrivals with Johnson after quitting his government earlier this year.

Sunak has remained tight-lipped on his policy plan in the last few days, but he was widely seen as the more moderate of the two candidates in the last leadership contest over the summer. Compared to Liz Truss, he took a softer line on matters like Brexit and the economy.