If you're just joining us, then welcome! It was a historic victory for the Conservative Party in the UK general election.

Boris Johnson gambled and it paid off. He is the UK Prime Minister, has a handsome majority and the main opposition party has been decimated.

But what happens next on results day? Johnson is expected to make the traditional post-election journey to Buckingham Palace for an audience with the Queen. A re-elected prime minister is not required to see the Queen in person, but there has been no suggestion that Johnson will miss the opportunity to meet Her Majesty.

Labour leader Jeremy Corbyn is likely to speak in the wake of his pledge to resign following his party's disastrous showing. A happier SNP leader Nicola Sturgeon, whose party won 48 seats -- 13 more than in 2017 -- is also expected to speak at an event in the Scottish capital Edinburgh. 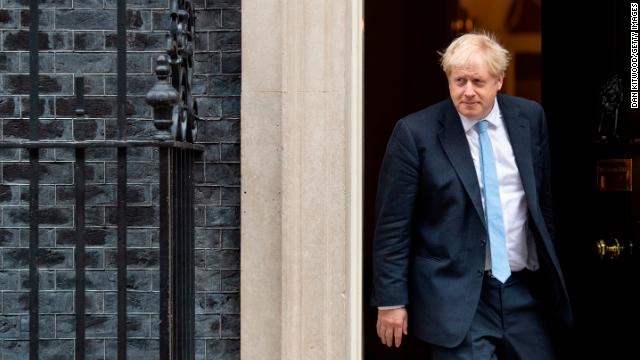 No government appointments will be made today, a Number 10 spokesperson told CNN.

The public will have to wait until Monday to see how Johnson stacks his new team.

There is just one more seat to call, but bad weather on an archipelago in Britain's south west means the count has been postponed to this afternoon.

The St. Ives constituency count had been held back until 2.30 p.m. local (9.30 a.m. ET) because boats were unable to carry ballot boxes from the outer islands of the Isles of Scilly to the main island, St. Mary's, PA News reports.

Even a helicopter struggled to make the transfer.

Once the ballots are counted on St. Mary's, the outcome will be relayed to the count on the mainland before declaration is made, PA News reports.

From Narendra Modi in India to Scott Morrison in Australia, world leaders have been sending their well wishes to Britain's Prime Minister Boris Johnson.

Here's what they had to say:

"Say g’day to the quiet Britons for us," write Australian Prime Minister Morrison to Johnson on Twitter.

Fun fact, some of the people who worked on Morrison's election campaign reportedly helped Johnson in the run-up to this year's vote.

As did Bulgaria's PM Boyko Borissov and Prime Minister of Latvia Krisjanis Karins.

The main FTSE 100 index is around 0.5% higher in the opening minutes of trade.

The more domestically focused FTSE 250, which is made up of smaller firms, is also trading higher. It climbed 2% in early trade.

While Boris Johnson will understandably claim December 12 as a victory for himself and the Conservatives, the numbers show the real story is the electorate’s rejection of Jeremy Corbyn’s Labour Party.

The SNP, Brexit Party, Greens and Liberal Democrats all ate into Labour’s vote -- and in this first-past-the-post system, the smaller parties nibbling away at Labour gave the Conservatives a chance to gobble up a huge swathe of seats.

One big surprise of the 2017 election was how much of the country voted for one or the other of the two big parties, Labour or the Conservatives.

That election may turn out to have been a blip -- and 2019 may signal the return to a more fragmented electorate.

Prime Minister Boris Johnson reiterated his campaign pledge to "get Brexit done" during a victory rally in central London on Friday, where he made digs at Labour leader Jeremy Corbyn and remain voters in the country.

"With this election we have put to end all those miserable threats of a second referendum."

"And I say respectfully to our friend in the blue twelve star hat that’s it time to put a sock in the megaphone and give everybody some peace," he said.

He reiterated the pledge to get the country out of the European Union by January 31 and deliver "the democratic mandate of the people" and celebrated what he said was the biggest majority for the Conservatives since the 1980s.

The Prime Minister is speaking to campaigners and supporters in London.