Stanley Johnson, father of Boris Johnson, has come under criticism for making allegedly Islamophobic comments during a live election night show on the UK's Channel 4.

He said: "If I was a female fighter jet pilot, I would expect someone to say 'don't wear a burqa.'"

A fellow panelist on the show labelled the comment as "disgraceful".

Boris Johnson has been accused of Islamophobia in the past, having previously said in a newspaper column that women in burqas "look like letter boxes".

Niqabs and burqas were at the center of a controversy involving Boris Johnson last year, when he likened Muslim women who wear veils to "letter boxes" and "bank robbers" in his column for the Daily Telegraph newspaper.

He has since partially apologized, saying at the launch of his bid to become Prime Minister this summer: "In so far as my words have given offense over the last twenty or thirty years when I've been a journalist and people have taken those words out of my articles and escalated them. Of course, I am sorry for the offense they have caused."

On the same show tonight, the Canadian comedian Katherine Ryan confronted Boris Johnson's father on the issue of single motherhood.

That came shortly after his son was criticized for a 1995 newspaper column in which he called the children of single mothers "ill-raised, ignorant, aggressive and illegitimate".

The European Union stands ready to take the “next steps” in reaching a deal on the final Withdrawal Agreement with the United Kingdom, whatever the result of Thursday’s election, European Council President Charles Michel said Friday morning in Brussels.

“About the outcome of the elections in the UK, we will wait to see what will be the official results. But there is a strong message … tomorrow we’ll have a discussion in the European Council on Article 50 and you know that we are ready for the next steps,” the European Council President said during a press conference in the early hours of Friday.

“We will see if it is possible for the British parliament to accept the Withdrawal Agreement, to take a decision. And, if it is the case, we are ready for the next steps,” Michel added, asserting that the EU remains committed to maintaining “close cooperation” with the UK.

Speaking to members of the press alongside the European Council President, European Commission President Ursula Von der Leyen said the EU is “ready to negotiate” whatever the result.

Their comments follow a meeting of European Heads of State on Thursday in Brussels to discuss the EU’s action against climate change and the bloc’s long-term budget.

Labour leader Jeremy Corbyn has appeared at his count in Islington, north London, on what appears to be a disastrous night for the party.

Corbyn looked sullen but managed some smiles for people greeting him at the counting center. He has mostly stayed with his team of aides, and hasn't made any public statements since polls closed.

But when he wins his seat (a foregone conclusion in super-safe Labour territory) he'll have to break his silence.

Jeremy Corbyn is still the Labour leader -- but the poor performance by his party so far has led to widespread speculation that he will be forced to step down.

An emotional Phillips was asked by ITV whether she'll run, to which Phillips nodded and made an affirmative sound.

"If people trust me then yes, I will take a role in rebuilding," she said, before adding: "This isn't about headlines, this is about people's lives."

Phillips is far further to the center than Corbyn, and her election would likely not be favored by the Momentum group within the Labour Party.

But she has the benefit of being from a seat in the Midlands; the party would be expected to look towards winning back the north and the Midlands as it elects its next leader, which is bad news for Remain-leaning London politicians like Keir Starmer and Emily Thornberry -- but it's great news for potential candidates away from the capital.

Boris Johnson and Scotland are on a collision course.

Nicola Sturgeon’s pro-independence Scottish National Party looks set to do just as well on its home turf as Johnson’s Conservatives are doing down south.

The new Tory majority suggested by exit polls will guarantee that Brexit will happen and that means that Scotland will be dragged out of the European Union against its will.

This is a scenario that is a recipe for antagonism between the SNP and London. Politically, Scotland and England will look like entirely different countries. That will create huge new pressure from the SNP for another independence referendum.

It doesn’t necessarily follow that everyone voting for the SNP wants to leave the UK. Given Labour’s eclipse in Scotland — a former heartland and the failure of the Liberal Democrats — the SNP may have been a refuge for homeless Remain voters.

Many of the economic concerns that prompted Scotland to turn down independence in the referendum by a 10% margin in 2014 still apply.

And Boris Johnson, who after all leads the Conservative and Unionist Party, has said he will not grant Scotland another referendum. His big majority means he won’t have to.

But if the SNP follows its bumper night on Thursday with another landslide in the elections for the Scottish parliament in 2021 — perhaps on an independence platform, the tensions between Scotland and London could become unsustainable.

A big Tory majority will also send shockwaves through the tortured politics of Northern Ireland. Many unionists see Johnson’s Brexit deal as a betrayal. There are fears that Brexit will revive the buried ghosts of the Troubles.

The Tory win will also fuel speculation that in the years to come the ties to the mainland among younger, more pro-European unionist voters will begin to fade. South of the border of course Ireland will remain in the European Union.

By no means is the United Kingdom safe yet.

Elections in the UK are dominated by the major traditional parties due to the first past the post system, but that doesn't mean that other candidates don't run. In fact, the country has a peculiar tradition of novelty candidates, who tend to run in opposition to big name politicians.

As a result they get the opportunity to appear alongside key figures such as the Prime Minister or the leader of the opposition at the results ceremony, giving rise to some surreal scenes.

Lord Buckethead (above), a Darth Vader-esque character, is based on an obscure villain from the 1984 Star Wars parody Gremloids (or Hyperspace).

Buckethead also called for tactical voting in an attempt to depose Johnson.

The politician -- or someone running under the same moniker -- stood against former PMs Theresa May in 2017, John Major in 1992 and Margaret Thatcher in 1987.

Count Binface (above) is a new challenger, although neither of the two are predicted to trouble Johnson.

Asked how he thought he had performed, Binface couldn't resist a dig at Johnson's biggest rivals.

"Very badly but not as badly as the Labour party seems to have done, so you know, it's all relative," he told CNN.

And Labour leader Jeremy Corbyn had a run-in with a protester dressed as the Sesame Street character Elmo at a polling station.

Corbyn's security team held Elmo back as the character chased Corbyn holding a sign reading: "Bobby Smith. Give me back Elmo." 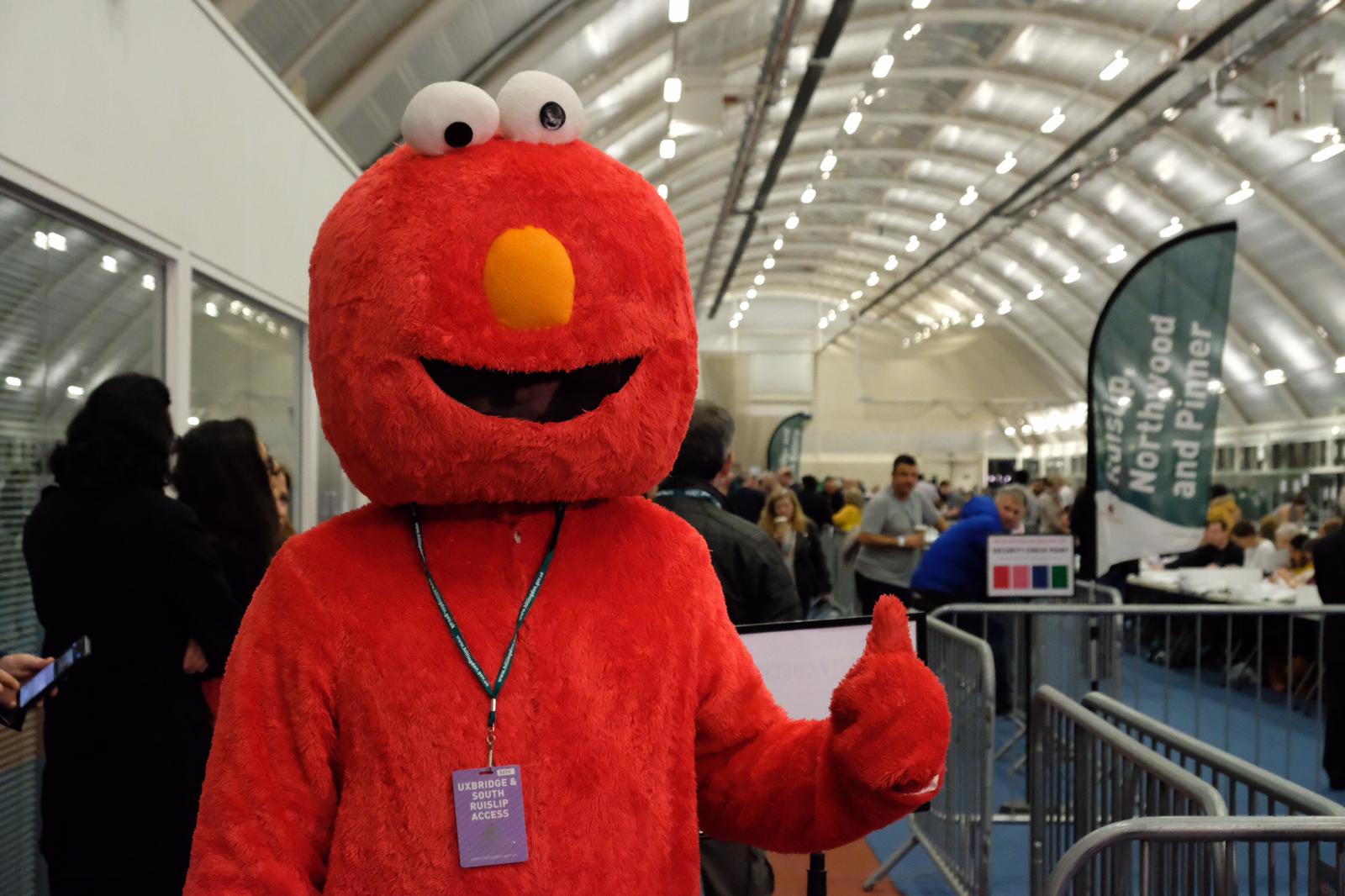 Bobby Smith is the name of the fathers' rights campaigner that ran as a candidate against then Prime Minister Theresa May in 2017 as a representative of the Give Me Back Elmo Party.

And one of the UK's smallest parties -- the Monster Raving Loony Party -- fields novelty candidates in multiple seats around the country.

It is currently led by a figure known as Howling Laud Hope, and its policy proposals include replacing Britain's nuclear deterrent, Trident, with "a tuning fork," and giving the vote to anyone over the age of five who can hold a crayon.

The picture they paint is clear; Boris Johnson is heading back to Downing Street, likely with a sizeable majority, while the Labour Party is hurtling towards disaster.

The trickle is about to turn into a flood as many more results come in over the next hour.

And this trend won't necessarily repeat itself everywhere; Labour will hope to make gains in London and in Remain-leaning areas of southern England.

But that will be little consolation for a party that, just hours ago, had been murmuring about the possibility of unseating Boris Johnson in his constituency.

Over in the Conservative camp, it's all smiles.

Throughout the campaign, a huge amount of attention was paid to the so-called Workington Man -- the archetypal working class voter, in a traditional Labour seat that voted for Brexit.

This is the voter the Conservative Party identified as the one it must win over.

And they have. The Tories have gained Workington comfortably, picking up 20,448 votes to Labour's 16,312. Labour had won the seat with a similar majority last time.

Moments later, the same result occurred in Darlington -- the Tories gained the seat from Labour with an 8% majority.

It means the Conservatives' electoral strategy has paid off spectacularly, while Labour has found itself cut adrift in its own heartlands.

Only a few results are in, but they're painting a dire picture for Jeremy Corbyn and the Labour Party -- and the recriminations are well underway.

Corbyn, the socialist leader who dragged the party to the left after his upset win in the 2015 leadership contest, has now led the party to one of its worst ever electoral results, if the exit poll is correct.

His ally John McDonnell told the BBC that Brexit dominated the campaign, with Boris Johnson's message resonating. But plenty of Labour candidates, MPs and insiders have blasted his leadership -- and called for his allies to follow him out of the door.

It's increasingly unlikely Corbyn will survive this result. What's up in the air is the role Momentum, the left-wing campaigning group that has remodeled the Labour Party since his 2015 victory, will play in the party going forward.

Corbyn was a disaster on the doorstep," longtime Labour politician Alan Johnson told Momentum founder Jon Lansman on ITV. "Everyone knew that he couldn't lead the working class out of a paper bag. Now Jon's developed this Momentum group ... I want them out of the party. I want Momentum gone. Go back to your student politics."

“For @UKLabour leadership to blame Brexit for the result is mendacious nonsense. Jeremy Corbyn’s leadership was a bigger problem. To say otherwise is delusional. The Party’s leadership went down like a lead balloon on the doorstep. Labour’s leadership needs to take responsibility,” he tweeted.

His anger followed similar verdicts from other Labour figures, including Ian Murray, who wrote: "Every door I knocked on, and my team and I spoke to 11,000 people, mentioned Corbyn. Not Brexit but Corbyn. I’ve been saying this for years. The outcome is that we’ve let the country down and we must change course and fast."