The latest on Boris Johnson's resignation

Boris Johnson's turbulent tenure as Britain's Prime Minister came to an end Thursday after a historic party revolt over a series of ethics scandals forced him to step down.

It took the resignation of nearly 60 members of his government — almost half the payroll — for Johnson to finally abandon his attempts to cling on to power.

Speaking in front of the famous 10 Downing Street door, the same place where many of his predecessors delivered their own resignation address, Johnson announced that he would be stepping down — without actually saying the words out loud.

Even then, the Prime Minister insisted that he would continue as caretaker leader while the Conservative Party launches the process of choosing a successor.

Some senior figures in his party say even that will be unsustainable, given the dwindling number of people willing to work for him.

Others are already lining up to replace him. Party officials say they will announce the timetable for a leadership election by Monday.

Thank you for joining us for our live coverage. Read our full report here.

After nearly a week of chaos and misery among Conservative lawmakers, "the bubble has been burst. We can move on," as one former government minister put it.

Despite all the problems facing the country, despite the Conservative party trailing in the polls and despite the potential stain Boris Johnson has left on the party, Conservatives are relieved and even optimistic.
However bad things were, the party seems to sincerely believe it can rebuild itself and that the leadership contest will allow it to reinvent itself after Johnson.

There is anger that Johnson might stay in post until autumn from those who feel the most let down by him, and some don’t quite believe that he won’t try and do further damage in the final weeks of his time in Downing Street.

Those two groups are largely from the extreme ends of the party: The arch-Conservative Euroskeptics who saw Johnson as the closest thing to an ideologically alighted leader they would ever see and the softer Conservatives who think he’s debased the party.

For most, the nightmare of the past few months is over and, for now, Conservatives largely believe they can get back to doing what they believe they do best: Finding ways to stay in power.

This is, of course, an early snapshot of opinion and a leadership contest could well bring up wrinkles, divisions and more fundamental problems with the party that has been in power for 12 years.

A poll published on Thursday by James Johnson, who worked for Theresa May when she was Prime Minister, indicated that only one of the potential candidates to replace Johnson, former Chancellor Rishi Sunak, outpolls the leader of the opposition Labour Party, Keir Starmer.

But for the time being, life in Conservative world is more upbeat than it’s been for a long time.

Outgoing British Prime Minister Boris Johnson’s government will not make major policy or fiscal changes before his successor is chosen, he told his Cabinet, according to a meeting readout seen by CNN.

"He made clear the government would not seek to implement new policies or make major changes of direction, rather it would focus on delivering the agenda on which the Government was elected. He said major fiscal decisions should be left for the next Prime Minister," according to the statement.

For the remainder of his tenure, the government’s priority would be to focus on delivering manifesto pledges, "the cost of energy, transport and housing and all else that matters to the public."

This move could see him become the caretaker Prime Minister if Boris Johnson stands down before a new Tory leader is elected.

Johnson resigned Thursday but has insisted he will stay on until the Tories elect a new leader despite mounting calls for him to step down right away.

Conservative MP Steve Baker told CNN’s Max Foster that if a Conservative politician were to be appointed as caretaker Prime Minister in the time between Johnson’s resignation and the party’s election of a new leader, that person could not enter the race to become the next British Prime Minister.

In a statement provided to CNN, US President Joe Biden said he looks forward to continuing “close cooperation with the government of the United Kingdom” and other allies on a host of issues, including Ukraine.

He also described the relationship between the United States and the United Kingdom as “strong and enduring."

The statement comes on the heels of British Prime Minister Boris Johnson’s announcing he intends to resign his post.

“The United Kingdom and the United States are the closest of friends and Allies, and the special relationship between our people remains strong and enduring. I look forward to continuing our close cooperation with the government of the United Kingdom, as well as our Allies and partners around the world, on a range of important priorities. That includes maintaining a strong and united approach to supporting the people of Ukraine as they defend themselves against Putin’s brutal war on their democracy, and holding Russia accountable for its actions.”

Johnson called Zelensky a "hero" and said "everybody loves you," according to an official readout of the call.

"The Prime Minister highlighted the UK’s unwavering cross-party support for President Zelensky’s people, and said the UK would continue to supply vital defensive aid for as long as needed," a Downing Street spokeswoman said.

Zelensky’s office confirmed they discussed the future of "defense cooperation" and Britain’s support for Ukraine. He thanked Johnson for his "decisive" action on Ukraine.

"We all heard this news with sadness. Not only me, but also the entire Ukrainian society," Zelensky told Johnson. "We have no doubt that Great Britain's support will be preserved, but your personal leadership and charisma made it special."

Johnson reportedly pledged to continue to work "at pace" toward ending Russia's grain blockade of Black Sea ports "in the coming weeks."

Under the UK political system, between elections, only Conservative members of Parliament have the power to remove a sitting Conservative Prime Minister.

Johnson indicated in his resignation speech that he plans to stay in office until a successor is chosen.

But it's not clear that the Conservative Party will stand for that in Johnson's case.

Take a look at who might replace Johnson as UK Prime Minister.

So, how will a new leader be selected and what can we expect?

How is the new Conservative Party leader chosen?

Leadership candidates need the support of at least eight lawmakers.

If there are more than two candidates, Conservative Party lawmakers hold round after round of votes to whittle the number of leadership candidates down to two.

Then Conservative Party members nationwide vote — by mail — between the two finalists.

The winner becomes leader of the party — and Prime Minister. 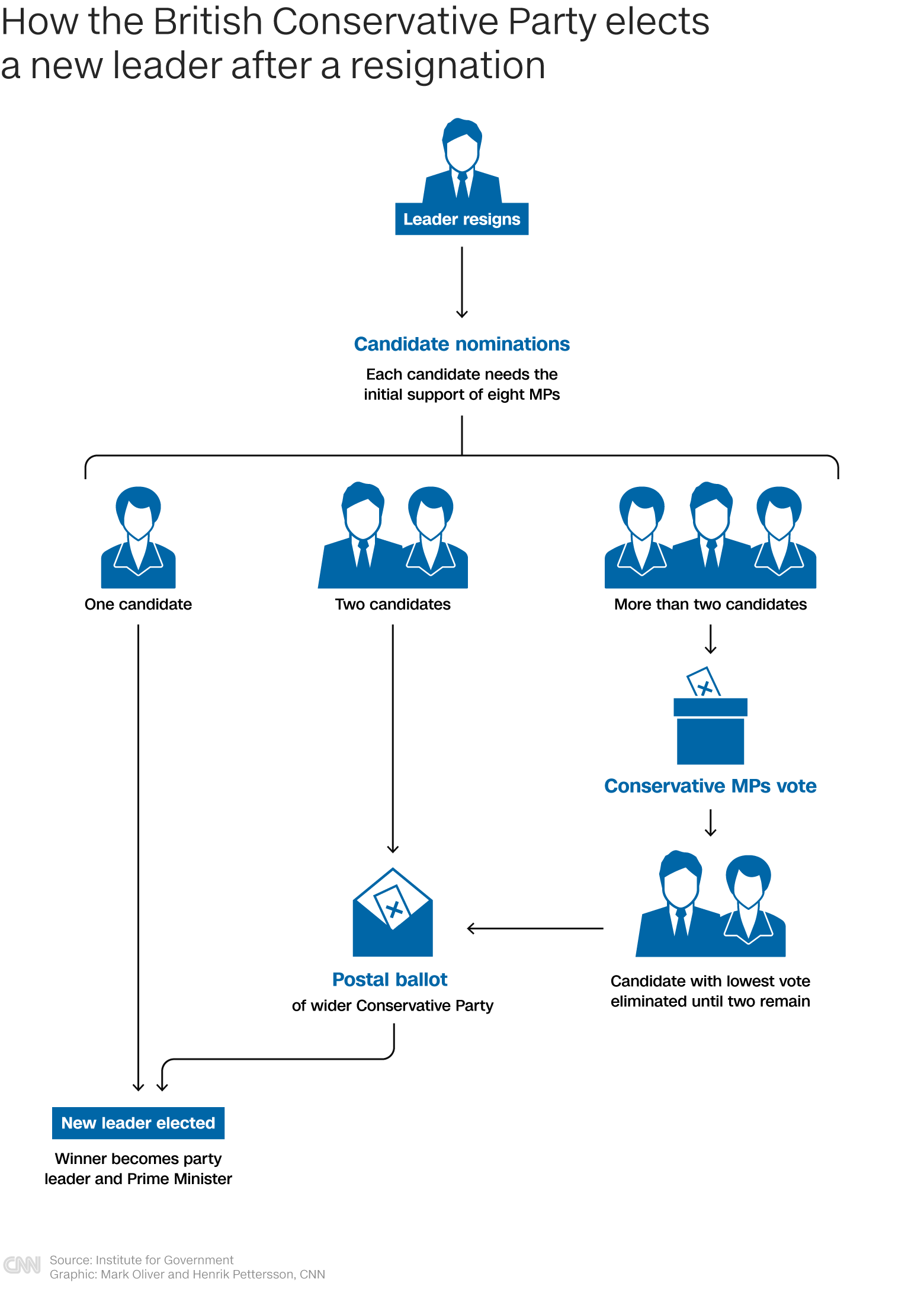 Is there any way to force Johnson to leave before a new Conservative Party leader is chosen?

Conservative lawmakers could, in theory, try to force him out themselves by calling a vote of confidence among Tory MPs. But Johnson survived a vote like that just a month ago.

Under current party rules, that means there can't be another party confidence vote in him for 12 months.

The rules could be changed, but it's not clear the Conservative Party wants to start that kind of infighting when Johnson has already said he's going, and when a leadership contest is under way.

Can't the opposition do anything to force Johnson out?

Labour leader Keir Starmer said Thursday that if the Conservatives didn't push Johnson out immediately, the opposition would call a confidence vote in the government among the entire House of Commons.

As crisis after crisis has engulfed Boris Johnson in recent months, so rivals of Britain's beleaguered Prime Minister have been plotting behind closed doors to replace him.

After a dramatic cascade of nearly 60 resignations by lawmakers and government officials, Johnson was forced to begrudgingly announce on Thursday that he would step down.

Here are the potential contenders to succeed him as the new leader of the Conservative Party:

The former chancellor was Johnson's presumed successor for several months after he won praise for overseeing Britain's initial financial response to the Covid-19 pandemic.

But Sunak's stock sank earlier this year after revelations that his wife had non-domicile tax status in the UK and that he held a US green card while a minister. He is, however, still among the bookmakers' odds-on favorites to take Johnson's job.

Like Sunak, Health Secretary Sajid Javid resigned this week over the botched handling of the resignation of Johnson's former deputy chief whip in a sexual misconduct scandal. Although Javid's resignation speech sounded very much like a pitch for Prime Minister, outlining how to reshape the party for future generations, it is not yet clear whether he will run.

The foreign secretary, who has made her leadership ambitions known in recent years, could now be in pole position. Truss is popular among Conservative members, who would pick the eventual winner of a contest. Last month, a source working in the Foreign Office told CNN that Truss had been in "endless meetings with MPs," and that "it's been insinuated that she's seeing what her support base is, should the time come." Truss' office denied that any covert leadership bid was coming.

The trade minister is one of the bookmakers' favorites to replace Johnson. After last month's confidence vote, Penny Mordaunt declined to comment on whether she backed Johnson, raising eyebrows among Westminster observers when she said: "I didn't choose this Prime Minister."

A former British military officer who chairs the Foreign Affairs Select Committee, Tom Tugendhat has been one of Johnson's most robust critics and has made no secret of his desire to become Prime Minister.

Less than two days after he was appointed to chancellor, replacing Sunak, Nadhim Zahawi publicly called on Johnson to resign. Until his promotion, Zahawi, who joined the cabinet less than a year ago, was considered an unlikely choice as the next Prime Minister. But his rise under Johnson has been rapid, making his mark with early success as vaccines minister amid the coronavirus pandemic and then as education secretary.

A former health and foreign secretary, Jeremy Hunt lost the 2019 leadership vote to Johnson. He has since styled himself as an antidote to Johnson and is without question the highest profile contender on the moderate, ex-Remain side of the party.

Read about the other contenders here.

The leader of the opposition Labour party has said Boris Johnson needs to go "completely" and "not cling on for a few months."

Earlier, Keir Starmer said that his party will bring forward a vote of confidence in Johnson if the Conservatives allow him to "cling on" to power.

Johnson is expected to remain as a caretaker prime minister until a new Conservative leader is picked.

"He needs to go completely — none of this nonsense about clinging on for a few months. He's inflicted lies, fraud and chaos in the country," Starmer said in a video posted to his Twitter account on Thursday.

Labour has not been in power since losing the 2010 election, and Starmer criticized 12 years of government under the Conservatives.

"We're stuck with a government which isn't functioning in the middle of cost of living crisis. And all of those that have been propping him up should be utterly ashamed of themselves. We've had 12 years of a stagnant economy, 12 years of broken public services, 12 years of empty promises. Enough is enough."

"And the change we need is not a change at the top of the Tory party, it's much more fundamental than that. We need a change of government and a fresh start for Britain," Starmer said.