The first members of the public were seen entering Westminster Hall to view Queen Elizabeth II's coffin lying in state after the hall was officially opened to the public at 12 p.m. ET (5 p.m. local time).

The Queen will lie in state until the morning of her funeral on Monday.

Tesco supermarkets across the UK will close on the day of the late Queen's state funeral, Tesco announced in a statement on Wednesday.

"On the morning of the funeral on Monday 19 September our stores across the UK will remain closed to allow our colleagues to pay their respects," said Jason Tarry, Tesco UK's CEO, in the statement.

However, some shops will remain open as an exception.

"A small number of our London stores will be open along the funeral procession," the statement added. 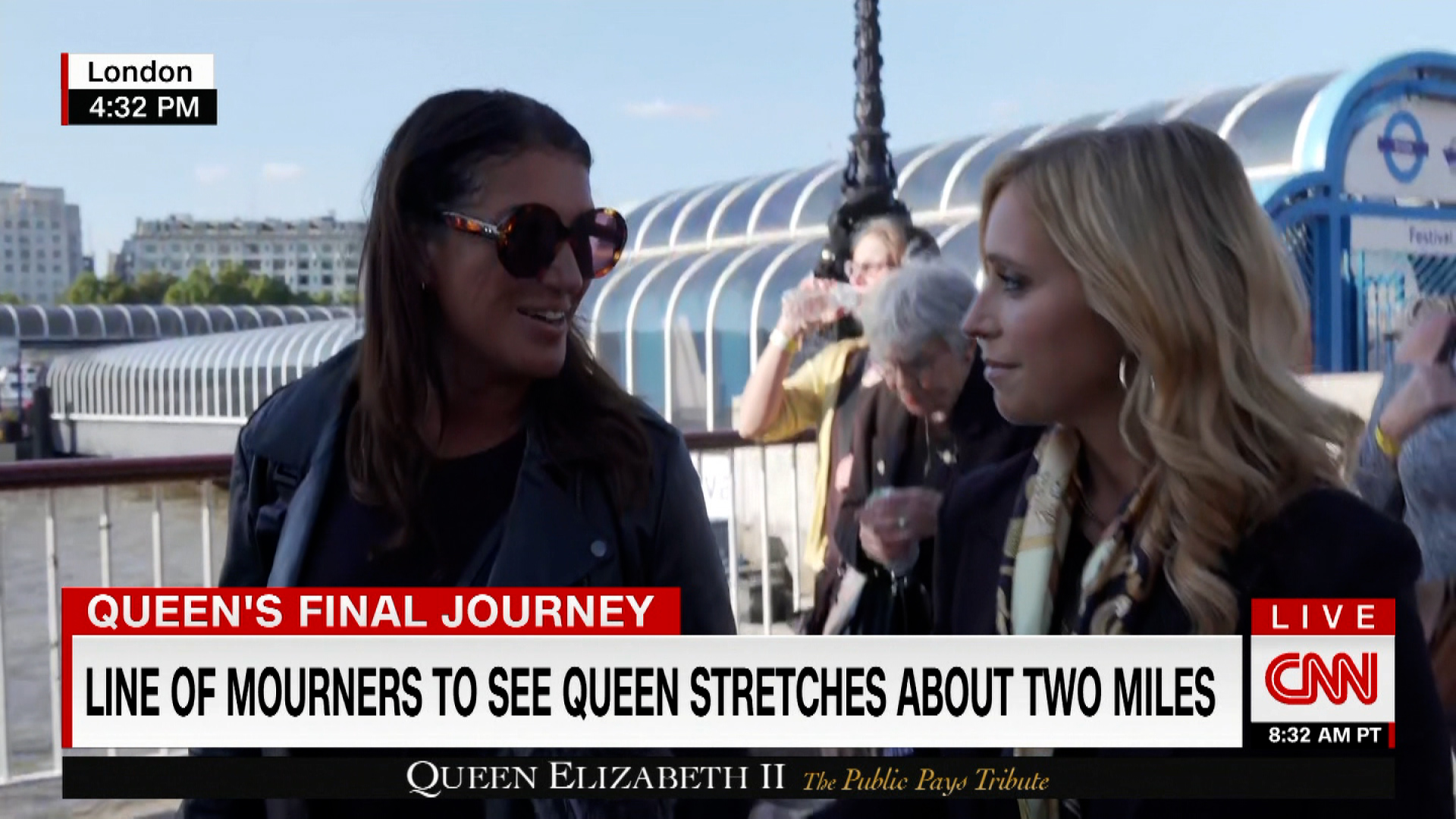 People in a 2.5-mile-long line (about 4 kilometers) in London to pay their respects to Queen Elizabeth II explained why they wanted to visit her coffin in Westminster Hall.

"I just feel like I will regret it if I don't. And I just felt like I needed to come and say goodbye. That's just me. And also, when my family has children — my boys have children — I'd like to teach them the history of it all. So, it just needed to be done today," one woman told CNN's Anna Stewart as she waited in line.

A group told Stewart that they were told the line could last about five hours from where they stood, but the queue is moving.

PBS announced a change in programming plans for coverage of the funeral of Queen Elizabeth II.

"The U.S and the Holocaust," a three-part film directed by documentarian Ken Burns, will no longer air on Monday to accommodate special programming from PBS and BBC around the funeral.

Episode 1 of the docuseries will still premiere on Sunday, with the second episode moving to Tuesday.

Catherine, the Princess of Wales, wore a diamond and pearl leaf brooch that belonged to Queen Elizabeth II at the short service marking the arrival of the late monarch's coffin at Westminster Hall, according to the UK’s Press Association.

The King’s Troop Royal Horse Artillery, which led the procession of Queen Elizabeth II’s coffin from Buckingham Palace to Westminster Hall earlier on Wednesday, has about 50% female regiment members, according to a defense source.

There is not a deliberate reason that a large number of the regiment members are women, the defense source told CNN.

"The King’s Troop Royal Horse Artillery role includes the firing of Royal Salutes to mark the grand occasions of State, including The Queen’s Birthday Parade, Royal Birthdays and Births," according to the British Army website. 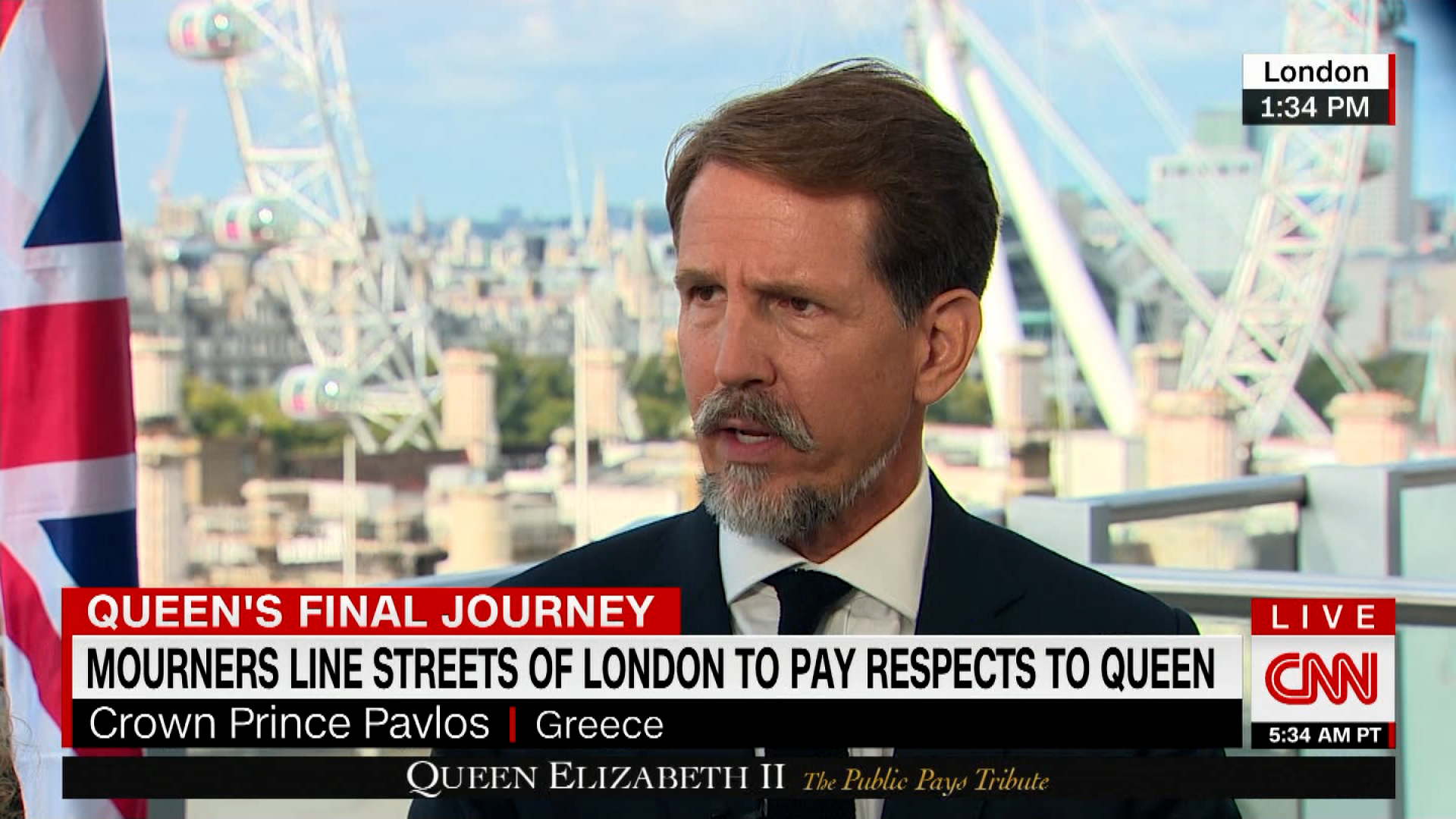 Pavlos, Crown Prince of Greece, told CNN that his cousin, Queen Elizabeth II, was "one of the kindest people I knew."

“She was always smiling … knowledgeable about everything… and had a very good sense of humor," he said.

He also expressed his love and praise for King Charles III, and he acknowledged the unique position of being an heir.

“What you’ve been waiting for your whole life is also the saddest day of your life,” he said.

King Charles III, according to Pavlos, is “best prepared” to inherit the Crown due to his vast knowledge of his country and the Commonwealth that he has acquired through his charity work under the Prince’s Trust.

Around 100 employees at King Charles III's former official residence, Clarence House, were given notice that they could lose their jobs after he became king, the Public and Commercial Services Union (PCS) said Wednesday.

[The] decision to announce redundancies in the Royal Household during the period of national mourning is nothing short of heartless," PCS said in a statement published on its website, calling for an "immediate halt to the redundancy process."

Some employees have worked there for decades, PCS noted.

This is a "significant majority of the household and many of these staff will be the same people who have so diligently supported the new king during this period of mourning, working extremely hard over recent days only to be given redundancy notices as thanks," PCS added.

“While some changes across the households were to be expected, as roles across the royal family change, the scale and speed at which this has been announced is callous in the extreme. Least of all because we do not know what staffing the incoming Prince of Wales and his family might need," PCS General Secretary Mark Serwotka said.

Clarence House's press office did not immediately respond to requests for comment.

Britain’s capital city expects hundreds of thousands of people to visit Queen Elizabeth II as she lies in state in Westminster Hall ahead her funeral on Monday, the mayor of London Sadiq Khan told CNN, adding that the situation was “unprecedented.”

The world has not seen a funeral like this,” he said, adding, “She was loved, revered, our monarch for more than 70 years.”

“We expect to see over the course of the next few days hundreds of thousands of people personally pay their respects to her majesty the Queen, but also we expect to see prime ministers, presidents, members of the royal family, and others from across the globe,” he continued.

As world leaders and their teams arrive in London for the Queen's funeral, Khan said the city has never before seen such crowd and this presence.

“In just a couple of days, we will have almost 300 world leaders and their teams and entourages coming to London. I don't think our city's ever seen the sort of presence we're going to see over the next few days,” Khan told Sky News.

The number of mourners far exceeds the scale of other events, such as the London Olympics and other Royal events, he said, suggesting that the crowds for the Queen’s passing are larger than all those events combined.

“If you think about the London marathon, the carnival, previous royal weddings, the Olympics -- it's all that, in one,” Khan said.

“This is a massive operation and we're working really hard together to make sure that we can do her, we can do King Charles, we can do the Royal Family, our city, our nation, and the Commonwealth, what it deserves,” the London mayor added.