A rainbow could be seen over the sky at Windsor Castle as the British flag was lowered after the announcement of Queen Elizabeth II's death.

Queen Elizabeth II, who has died age 96 after the longest reign in British history, will be mourned around the globe as one of the last monarchs born to a classic age of European royalty, when kings and queens wielded genuine political power.

Elizabeth Alexandra Mary was born in 1926, the first child of the Duke and Duchess of York.

But she didn't become heir presumptive to the throne until 1937, when her father was crowned King George VI after the scandalous abdication of his older brother — events dramatized in the Oscar-winning film "The King's Speech" and hit Netflix show "The Crown."

While living out the Blitz on London in nearby Windsor Castle, she was privately tutored in matters of constitution by Henry Marten, an eccentric yet respected teacher who reputedly kept a pet raven in his study.

She began taking tentative steps into public life in 1940 when, aged 14, she made her first radio broadcast: a speech to children displaced by the conflict. At 16, she was made an honorary colonel of the Grenadier Guards, a British army infantry regiment.

Wartime offered her certain freedoms beyond the traditional constraints of royal life.

In 1945 she joined the Auxiliary Territorial Service and spent four weeks getting her hands covered in oil and grease as she learned to drive and maintain military vehicles.

When victory was declared in Europe, a uniformed Elizabeth mingled with jubilant crowds outside Buckingham Palace.

Peacetime brought the return of Lieutenant Prince Philip of Greece and Denmark, a handsome young naval officer who had, by all accounts, won her heart when she was just 13. The pair married in Westminster Abbey in 1947. Their first son, Charles, was born just over a year later. 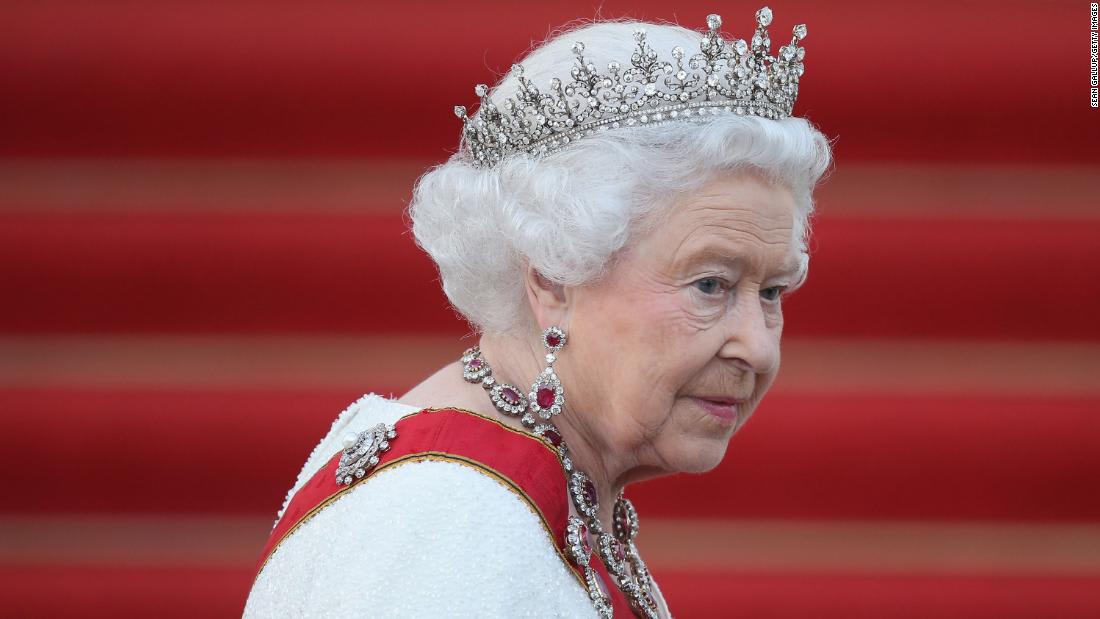 Elizabeth II:  The British Queen who weathered war and upheaval dies at 96

US House Speaker Nancy Pelosi has ordered the Capitol flags to be flown at half-staff after Queen Elizabeth’s death, according to her spokesperson Drew Hammil.

Tearful faces could be seen in outside the gates of Buckingham Palace on Thursday as news spread of Queen Elizabeth II's death.

Below, crowds gather along the road leading to the palace gates — where a statement announcing her death was just posted, per tradition.

Quiet singing of “God Save the Queen” has broken out across the gathered crowd.

White House press secretary Karine Jean-Pierre reacted Thursday to the news that Queen Elizabeth II has died at 96, saying that "our hearts and our thoughts" go to the family and the people of the United Kingdom.

"Our hearts and our thoughts go to the family members of the Queen, goes to the people of United Kingdom. I don't want to get ahead of what the President is going to say," Jean-Pierre said at the end of the White House press briefing, reacting live to the news of the Queen's passing.

"My life will always be devoted to your service."

It was a vow she made repeatedly throughout her record-breaking reign, most recently in a message marking the 70th anniversary of her accession to the throne.

Elizabeth II may not have been born to be monarch, but once fate had intervened, she steadfastly committed her time on earth to duty and service.

Even in the twilight years of her life, as many speculated on whether she might step back or perhaps even abdicate, she remained resolute in her devotion to her role.

As the coronavirus pandemic swept the world in 2020, the Queen and her husband, Prince Philip, retreated from London to Windsor Castle. As in other times of crisis, the nation sought reassurance from the monarch, who evoked wartime references before firmly declaring "we will succeed."

Keen to remain a presence in public life amid the lockdowns and social distancing measures, she pivoted like many of us did and began working from home, participating in virtual engagements and undertaking more calls.

Following the Duke of Edinburgh’s death in April 2021, she resumed her royal duties with typical steadfastness.

Her first public appearance took place a month after the death of her “strength and stay” with the State Opening of Parliament.

She tested positive for Covid-19 in February 2022, though she continued with some of her light duties despite suffering from mild cold-like symptoms.

In July, she traveled to her private Scottish home of Balmoral for the start of her traditional summer break. On Sept. 6, the Queen received former Prime Minister Boris Johnson at Balmoral Castle as he left office before she greeted Liz Truss to ask her to form a government and become prime minister. The historic audience was the first time the 96-year-old monarch carried out the key duty at her retreat in Aberdeenshire, rather than at London's Buckingham Palace.

News of her death truly marks the end of an era for the United Kingdom, with most of its people having known no other monarch at their head.

The Queen died peacefully this afternoon, the Royal Family announced on its social media accounts.

Her son Charles, who is now King, will return to London on Friday.

Queen Elizabeth II, the longest-reigning British monarch whose rule spanned seven decades, died on Thursday at the age of 96, Buckingham Palace has announced.

Elizabeth ascended to the throne in 1952, on the death of her father, King George VI. She oversaw the last throes of the British empire, weathered global upheaval and domestic scandal, and dramatically modernized the monarchy.

She died at Balmoral Castle in Scotland after doctors said they had become concerned about her health on Thursday.

Elizabeth ruled over the United Kingdom and 14 other Commonwealth realms, and became one of the most recognizable women ever to have lived. Her son, Charles, immediately became King upon her death.

Prince Harry is traveling to Balmoral from London, according to the UK’s PA Media news agency.

The Duke of Sussex was originally scheduled to attend the WellChild Awards in London on Thursday, which celebrates the inspirational qualities of seriously ill children and young people in the United Kingdom.

Harry canceled an appearance at the charity awards ceremony in London to fly to Scotland in the wake of fellow royals who have also travelled to Aberdeenshire, PA reported.

He is on his way to Balmoral separately from other royals but has been in coordination with other family members' plans, a spokesperson for the Sussexes told CNN earlier on Thursday.