Our live coverage has ended for the day. Read more for updates on Queen Elizabeth II's funeral plans here and King Charles III's accession to the throne here.

The Queen was at the Balmoral Castle, her Scottish country home, when she died on Thursday. Her funeral will be held in London and she will be buried in Windsor.

On Saturday, Buckingham Palace released some of the details of how this last cross-country journey of the late monarch will look like.

Here's what to expect: 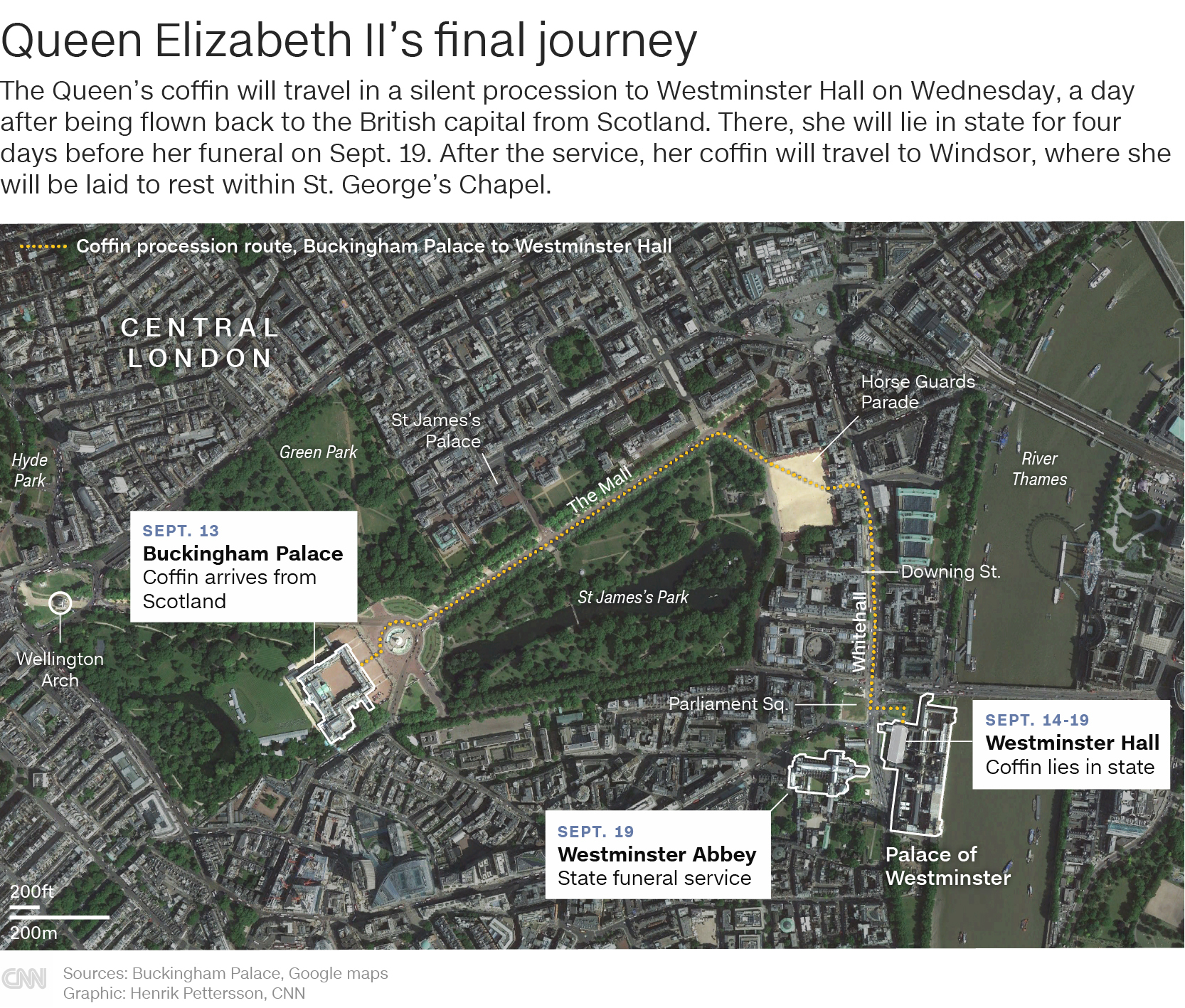 Billions of banknotes and coins around the world featuring the portrait of Queen Elizabeth II are set to be replaced following her death.

For almost 70 years, the Queen’s image has appeared on the United Kingdom’s coins, with different portraits of her profile as she aged. She was featured on the nation’s banknotes for more than 60 years, the first British monarch to do so. Her portrait also features on the currency of several countries that were formerly under British rule.

Since 1953, one year after the Queen took the throne, UK coins have borne five different versions of her portrait. She appeared on the country’s banknotes starting in 1960.

But now, the Bank of England, which prints the country’s banknotes, and the Royal Mint, which makes its coins, face the sizable task of withdrawing that currency from circulation and replacing it with money bearing the portrait of King Charles III.

There are more than 4.7 million banknotes in circulation in the UK, worth a collective 82 billion pounds ($95 billion), according to the central bank. There are also around 29 billion coins circulating, the Royal Mint said.

The new money is likely to be introduced gradually and will coexist as legal tender with the old notes and coins for a period of time.

A similar phase-in happened in 2017, when the Royal Mint began issuing a new 12-sided 1 pound coin. The new coin circulated at the same time as the old round-shaped coin for six months before the latter lost its status as legal tender.

But it’s not just cash that will require a makeover. The UK faces a mammoth operation to change the royal insignia on thousands of post boxes and newly issued passports. 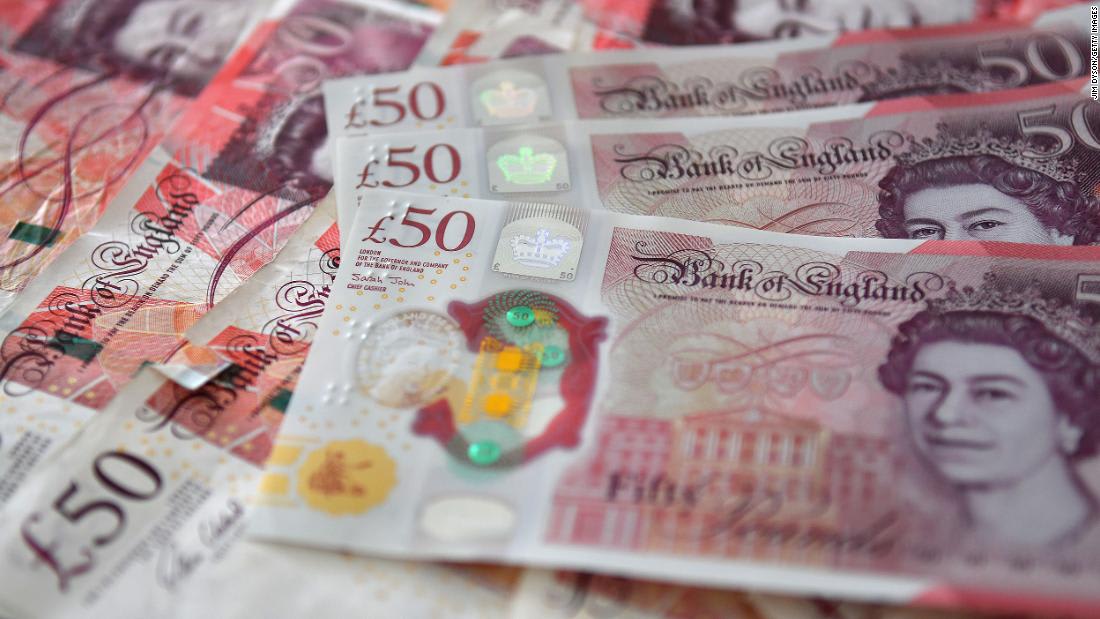 There are more than 4.7 million banknotes in the UK with the queen's face on them. They will all be replaced

British Prime Minister Liz Truss will join King Charles III next week as he leads “services of reflection” for the late Queen in Scotland, Northern Ireland and Wales, according to Downing Street.

Truss will travel with the King to all three nations, beginning with Scotland on Monday, followed by Northern Ireland on Tuesday and Wales on Friday.

A Downing Street spokesperson told the UK’s PA Media news agency that the prime minister “believes it is important to be present for what will be a significant moment of national mourning around the United Kingdom.” 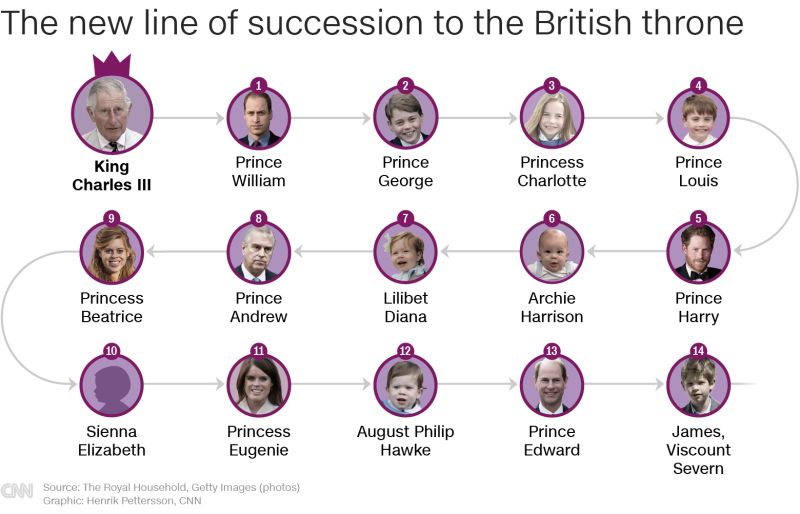 With the death of Queen Elizabeth II, her son, Charles, immediately became King.

Here’s what we know about the British royal family’s line of succession.

What to know: Charles was the longest serving British monarch-in-waiting; he’s been the heir apparent since the age of 3.

Before he became King, he was president of The Prince’s Trust and the Royal Shakespeare Company, and president or patron of more than 400 charitable organizations. Charles was also the first royal heir to earn a university degree.

More key relatives: Diana, Princess of Wales, to whom he was married from 1981 to 1996. They had two children together: Princes William and Harry.

Diana died in 1997 following a car accident in Paris, along with boyfriend Dodi Fayed and driver Henri Paul.

What to know: Prince William, King Charles’s older son, is now heir apparent. The King also bestowed the title of Prince of Wales on William on Friday. William and his wife Kate have taken on the additional titles of Duke and Duchess of Cornwall, which were previously held by Charles and Camilla.

William has achieved the highest educational degree – master of arts – of any member of the royal family. He served in the military from 2006 to 2013, participating in more than 150 helicopter search and rescue operations.

More key relatives: Catherine, Duchess of Cornwall, whom he married in 2011. The couple have three children together: Prince George, 9; Princess Charlotte, 7; and Prince Louis, 4.

The family live in Adelaide Cottage, a four-bedroom property in the grounds of Windsor Castle, Berkshire, about 25 miles from London. Their London residence, Kensington Palace, will remain the family’s principal residence, however, a royal source told CNN in August.

What to know: If all goes as planned and Prince George becomes King following the reigns of his grandfather Prince Charles and his father Prince William, George – now second in line – will be the 43rd monarch since William the Conqueror.

But for now, he’s still brushing up on his education: George currently attends Lambrook School near Windsor along with his younger sister, Princess Charlotte and his younger brother, Prince Louis.

A royal source has revealed the reason why the Prince of Wales, William, invited the Duke and Duchess of Sussex, Harry and Meghan, on a walkabout at Windsor Castle a short time ago.

William, the source said, thought it was an important show of unity at an incredibly difficult time for the family.

CNN understands Prince William reached out to the Sussexes shortly before the walkabout to extend the invitation, according to a source.

The Prince and Princess of Wales, William and Kate, and the Duke and Duchess of Sussex, Harry and Meghan, spent about 45 minutes engaging with crowds of well-wishers and viewing floral tributes in Windsor, before leaving in the same car.

The couples spoke to members of the public, accepted flowers and even gave some hugs during the walkabout.

William could be heard thanking people offering their condolences, reading a letter from a little girl out loud, petting dogs and receiving floral bouquets.

Meghan was pictured giving a teenage girl a hug.

Prince Harry told the crowd outside Windsor Castle that Queen Elizabeth's presence can still be felt everywhere in the castle.

"No matter what room of the castle you are in, you can feel her presence," the Duke of Sussex said.

"She was a great granny," he added.

Prince William and Prince Harry and their wives Kate and Meghan greeted crowds in Windsor paying tribute to the Queen.

The Prince of Wales invited the Duke and Duchess of Sussex to join him and his wife, Catherine, to view floral tributes in Windsor earlier, a source told CNN.

CNN understands Prince William reached out to the Sussexes shortly before the walkabout.

The joint appearance of the two couples came as a surprise, after months of speculation about a rift within the family.