The moment Prince William and Prince Harry walked outside Windsor Castle on Saturday marked the first time the public has seen the two brothers together since the Platinum Jubilee celebrations in June.

William and Harry were joined by their wives Catherine and Meghan. The four viewed some of the tributes to the Queen left by the gates of the castle and then proceeded to greet members of public.

The Prince and Princess of Wales, William and Kate, and the Duke and Duchess of Sussex, Harry and Meghan, are currently walking around the memorials to the Queen in Windsor.

Queen Elizabeth II’s state funeral will be at Westminster Abbey in London on Sept. 19 at 6 a.m. ET, the Earl Marshal of Buckingham Palace announced.

The arrangements will include a four-day lying in state at Westminster Hall — the oldest part of the Abbey — starting on Sept. 14.

The Queen’s coffin will be taken by road to the Palace of Holyroodhouse in Edinburgh on Sunday and will take a six-hour journey by hearse to allow mourners to pay their respects.

On Monday, the coffin will then go in procession to St Giles’s Cathedral, where it will lie at rest until Tuesday.

It will then be flown to Buckingham Palace before arriving at Westminster Hall, where the Queen will lie in state until the morning of her funeral. 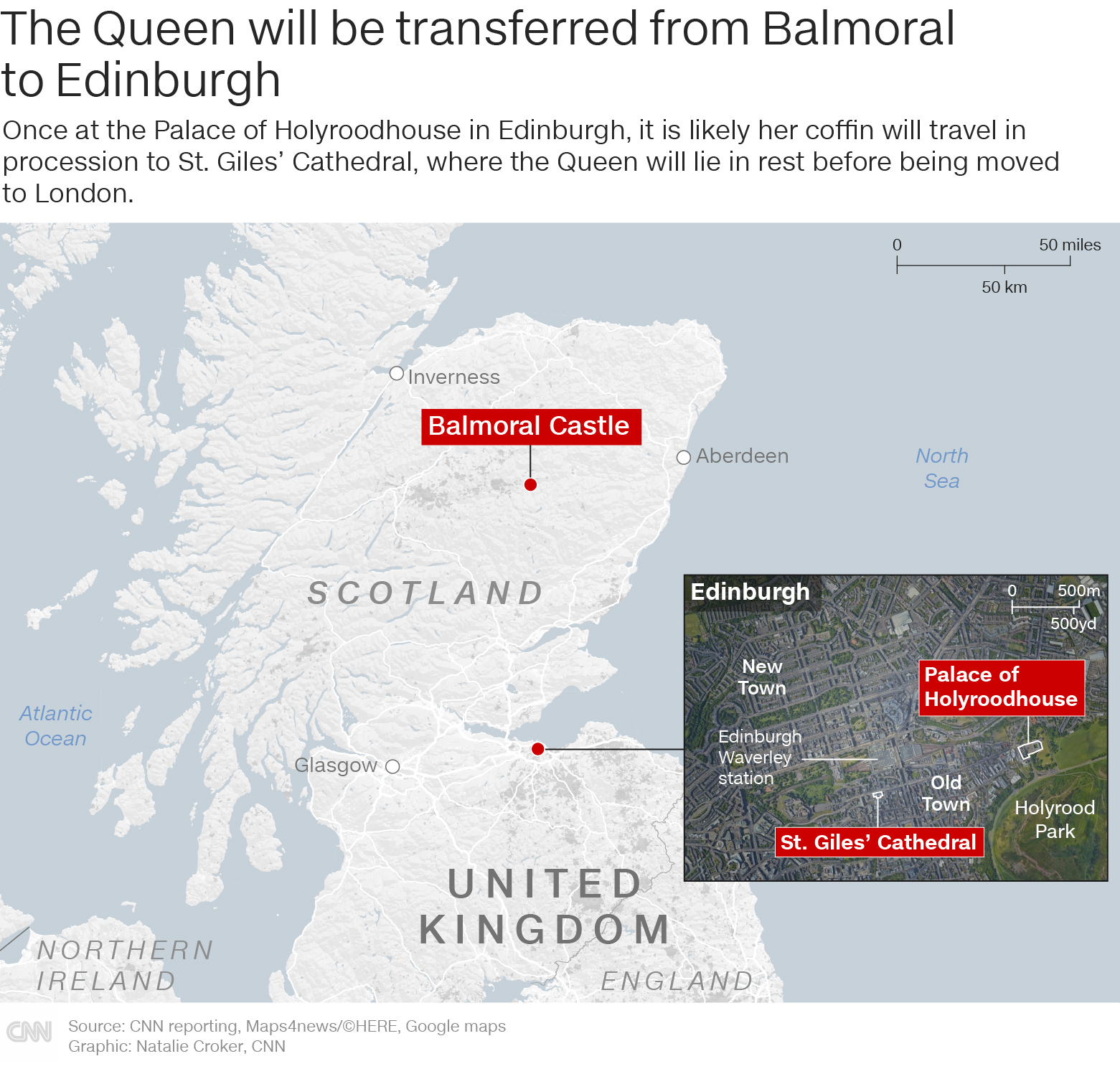 The state funeral of Queen Elizabeth II will be held in London at 11 a.m. on Monday, Sept. 19, Buckingham Palace announced on Saturday.

The late monarch's coffin will lie in state in Westminster Hall starting on Wednesday, giving the public an opportunity to pay their respects.

The Queen died at the Balmoral Castle in Scotland on Thursday, and preparations are currently being made for her remains to be transported back to London.

William, Prince of Wales, paid tribute to the late Queen, his grandmother, for the “wisdom and reassurance” she gave him.

His wife, Catherine, the Princess of Wales, “had twenty years of her guidance and support,” he said in the statement, which struck a personal tone.

His three children, George, Charlotte and Louis, “have got to spend holidays with her and create memories that will last their whole lives,” he said.

“She was by my side at my happiest moments. And she was by my side during the saddest days of my life. I knew this day would come, but it will be some time before the reality of life without Grannie will truly feel real.”

King Charles III has been proclaimed Canada's new head of state during an accession ceremony in Ottawa on Saturday.

As the new King, Charles automatically became the head of state of 15 countries, including the UK.

The ceremony at the Rideau Hall in Ottawa was held following the formal proclamation of the King as the new sovereign at events in London and was attended by Prime Minister Justin Trudeau and Governor General Mary Simon.

As part of the proceedings, Trudeau signed the order-in-council and the proclamation for the accession in the presence of Simon at the same table used by Charles' mother, Queen Elizabeth II, during her first official visit to Canada in October 1957.

The proclamation was followed by a 21-gun salute.

King Charles III held an audience with the Archbishop of Canterbury Justin Welby in the 1844 Room of Buckingham Palace on Saturday afternoon.

The 1844 Room, named to commemorate the 1844 visit by Russian Emperor Nicholas I, is used by the royal family to meet important guests.

It is where the Queen met the Japanese Emperor Akihito in 2007 and King Willem-Alexander of the Netherlands in 2018. She also recorded several of her traditional Christmas messages there.

The Archbishop was present this morning for the the Accession Council to sign the proclamation of Charles III as King.

The Archbishop of Canterbury is the leader of the Church of England, of which Charles is now the Supreme Governor of the church.

The King was also expected to hold audiences with the Dean of Westminster, the Prime Minister and members of the Cabinet, as well as leaders of opposition political parties on Saturday afternoon.

Members of the royal family in Balmoral, dressed in black, waved to crowds at the gates of the estate in Scotland on Saturday afternoon following their return from a private church service.

Prince Andrew, the Duke of York and the late Queen's second-oldest son, embraced his daughter Princess Eugenie as she shed a tear after a walkabout with the public.

The Duke of York thanked members of the public for coming, as the royal family was greeted by people waving, applauding and laying floral tributes in honor of the Queen.

"We've been allowed one day, now we start the process of handing her on," he said, according to the UK’s PA Media news agency.

Prince Edward, The Earl of Wessex and the late Queen's youngest son, also thanked well-wishers who came from both near and far away.

"Thank you very much for coming all that way, we appreciate it," Prince Edward said when he heard one group had traveled from Glasgow to show their support, PA reported.

Members of the royal family have returned to Balmoral estate following a private church service at nearby Crathie Kirk in Scotland.

The royal family then did a walkabout with members of the public on the road leading to Balmoral estate.

The royals who attended the short service include many of the late Queen's children and grandchildren, including Princess Anne, her husband Tim Laurence, and her children Zara Tindall and Peter Phillips.

Prince Andrew, the late Queen's second-oldest son, and his daughters Princesses Beatrice and Eugenie also attended, as did her youngest son Prince Edward, the Earl of Wessex, along with his wife Sophie, Countess of Wessex, and their daughter Lady Louise.

A CNN producer on the ground saw the walkabout and the cars with the royals return to the estate around 9:30 a.m. ET.