Commonwealth leaders have led global tributes to Prince Philip, as presidents, prime ministers and politicians around the world offer their condolences.

Canadian Prime Minister Justin Trudeau remembered Prince Philip as a man of "great service to others," in a statement, adding that he was "the patron of more than forty organizations in Canada, including the Canadian Aeronautics and Space Institute."

Australian Prime Minister Scott Morrison tweeted that Prince Philip was "no stranger" to the country, having visited on more than 20 occasions, adding that he had strong connections to many Australian organizations and the Australian Defence Force.

"Australians send our love and deepest condolences to Her Majesty and all the Royal family. The Commonwealth family joins together in sorrow and thanksgiving for the loss and life of Prince Philip. God bless from all here in Australia," he tweeted.

Other world leaders have also paid their respects, including Russian President Vladamir Putin and Turkish President Recep Tayyip Erdogan, who both offered their sympathies to Queen Elizabeth.

Former US President Barack Obama also paid tribute to the Duke of Edinburgh, tweeting that Prince Philip "proved that true partnership has room for both ambition and selflessness — all in service of something greater."

Prince Philip was born into the royal families of Greece and Denmark on the Greek island of Corfu on June 10, 1921.

He left Greece aged 18 months with his family when King Constantine was forced to abdicate after a revolt by Greece's war-stretched military forces.

The family moved first to Paris and later, in 1928, to England. He had an itinerant childhood, educated variously in the UK, France, and Germany. 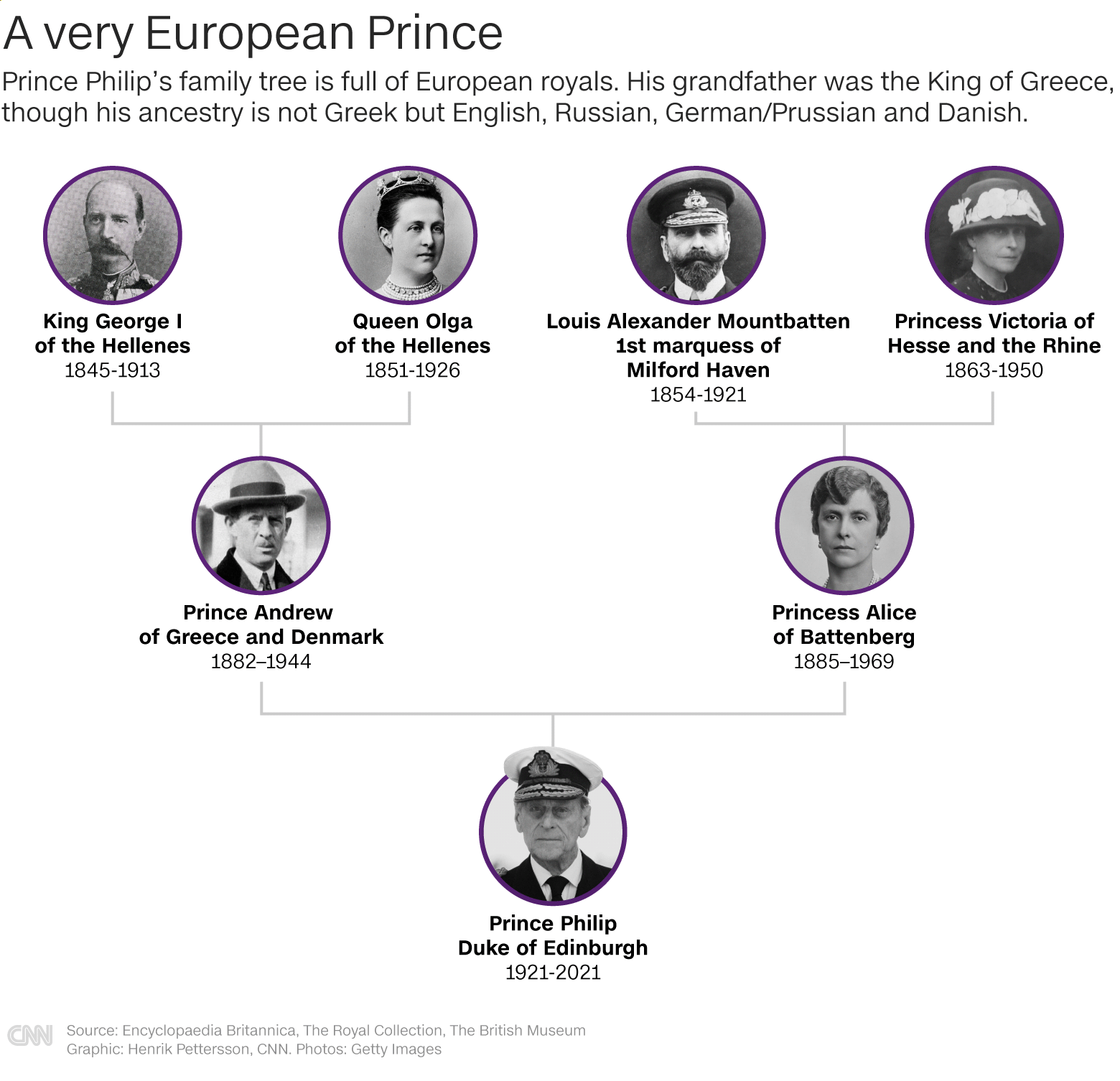 At the news of Prince Philip’s passing, World Wildlife Fund International’s Director General Marco Lambertini said “it’s a very sad day” for the organization because of the Duke of Edinburgh’s role in its formation.

“Prince Philip helped form WWF 60 years ago, in fact, this very month, April 1961. It's been associated with WWF for all the 60 years of our history. It's a day with a heavy heart," he told CNN.

Beyond the organization, Prince Philip “played a role, broadly speaking, in shaping the thinking of the conservation movement at the time. He was definitely, personally, deeply and genuinely passionate about nature. And also, he was also a tireless champion for the environment … He was a true visionary.”

The Duke also passed on his passion for nature to his children and grandchildren, Lambertini said.

“This is a passion that Prince Philip, a commitment, that never really faded,” he added. “I heard … he was always there for his family, his wife, the Queen. Well, he's been always there for the environment too.”

An online book of condolence has been launched on the Royal Family’s official website, allowing the public to leave messages of sympathy following the death of Prince Philip.

The family has asked members of the public to "consider making a donation to a charity instead of leaving floral tributes in memory of the Duke of Edinburgh."

"During the coronavirus pandemic, and in light of current Government advice and social distancing guidelines, modified funeral and ceremonial arrangements for His Royal Highness the Duke of Edinburgh are being considered by Her Majesty the Queen," said a statement from Buckingham Palace.

When Elizabeth of York first encountered Prince Philip, she was not intended to be queen. She was seven years old and serving as a bridesmaid to her aunt, Princess Marina of Greece and Denmark, at her wedding to the Duke of Kent at Westminster Abbey, while 12-year-old Philip was attending as the bride’s first cousin.

The children barely spoke -- but foreign newspapers had already listed Prince Philip as a suitably royal husband for the little Princess, as her third cousin through Queen Victoria.

When they met again five years later, in 1939, everything had changed. Elizabeth’s uncle, Edward VIII, had abdicated three years earlier. Her father was now King and she was the heir to the throne. Philip was an 18-year-old naval cadet. And Europe was on the brink of cataclysmic conflict and change, with World War II about to begin.

"How high he can jump!" Elizabeth said to her governess, Marion Crawford, in July 1939 when she saw Philip leaping over the tennis nets at the Royal Naval College in Dartmouth.

Elizabeth had led a very sheltered life with her family, spending most of her time with her sister and governess. Touring the college with her parents and sister, she was dazzled by the star cadet, who would soon be off on active service.

Elizabeth’s fascination was obvious to all and was most gratifying to Philip’s uncle, Dickie Mountbatten, who was hopeful of encouraging a marriage -- with himself as the power behind the throne.

During the war, Philip wrote to Elizabeth and came to stay at Christmas in 1943. Elizabeth was 17 and a young woman. Philip found her very appealing. She was not only attractive and witty, but she was cheerful and practical, very unlike his own fragile mother.

At the end of the war, Philip came to court Elizabeth with serious intent and took her out to concerts and restaurants or dined in the nursery with Princess Margaret.

The Palace was dubious about the match. The King and Queen wished her to "see more of the world" before marrying, and courtiers discussed how Philip was "no gentleman," "ill tempered" and possibly fickle -- he signed visitors' books as of "no fixed abode."

But Elizabeth refused to be swayed. She had been determined on Philip since the age of 13 and war had only intensified the romance. The King gave in and the engagement was announced on July 8, 1947, with the wedding date fixed for November 20.

Prince Philip was "an enormous support for the Queen to bring the monarchy into the second half of the 20th century and into the 21st century as well," Charles Anson, a former Press Secretary to Queen Elizabeth, told CNN.

The Duke of Edinburgh was "constantly a man open to new ideas and themes," he said.

Anson, who worked for the Queen in the 1990s, said Philip was "committed to supporting the Queen on every occasion, whether it's a happy one or a more difficult task with members of the family or a sad occasion."

The Prince also pursued his own professional life in support of the monarchy through wide-ranging public duties, Anson explained, adding that he was a man of action and ideas.

US President Joe Biden and his wife, First Lady Jill Biden, have offered their condolences to the Queen, the royal family and the United Kingdom, saying they were keeping the Queen and Prince Philip’s children, grandchildren, and great-grandchildren "in our hearts during this time."

On behalf of all the people of the United States, we send our deepest condolences to Her Majesty Queen Elizabeth II, the entire Royal Family, and all the people of the United Kingdom on the death of His Royal Highness Prince Philip, the Duke of Edinburgh.
Over the course of his 99-year life, he saw our world change dramatically and repeatedly. From his service during World War II, to his 73 years alongside the Queen, and his entire life in the public eye — Prince Philip gladly dedicated himself to the people of the UK, the Commonwealth, and to his family.
The impact of his decades of devoted public service is evident in the worthy causes he lifted up as patron, in the environmental efforts he championed, in the members of the Armed Forces that he supported, in the young people he inspired, and so much more. His legacy will live on not only through his family, but in all the charitable endeavors he shaped.

A similar message was posted on the US President's official Twitter feed:

Funeral arrangements for The Duke of Edinburgh are expected to be confirmed by Buckingham Palace on Saturday, April 10, according to a royal source.

CNN understands that plans for royal funerals have been in place for many years, but the ceremonial elements have had to be altered due to current COVID restrictions in the UK.

Earlier on Friday, the College of Arms confirmed that Prince Philip’s funeral will be held at St George's Chapel at Windsor Castle, "in line with custom and with His Royal Highness's wishes."

The College of Arms, which oversees many ceremonial aspects of the royal family's work, said the ceremony would not be a state funeral and would not be preceded by a lying-in-state, which could have seen thousands of members of the public lining up to view Prince Philip's coffin.

The funeral arrangements have been revised, because of the coronavirus pandemic, it added.

In view of the prevailing circumstances arising from the COVID-19 pandemic ... it is regretfully requested that members of the public do not attempt to attend or participate in any of the events that make up the funeral."

Players in the English Premier League will wear black armbands, and "there will be a minute’s silence before kick-off at all Premier League matches ... across the weekend," to mark the death of Prince Philip, the organization has announced.

The Premier League is just one of many UK sports governing bodies and clubs paying tribute to the Duke of Edinburgh on social media on Friday.

The Duke of Edinburgh Award acknowledged the passing of its founder and patron:

Liverpool Football Club announced that it will fly its flags at half-mast as a mark of respect.

The Welsh Rugby Union tweeted that Prince Philip's legacy of public service was "a lasting one."

The England and Wales Cricket Board tweeted: "We owe him a great debt for his support and passion over many decades.”