Our live coverage of the Oprah Winfrey interview with Meghan, the Duchess of Sussex, and Prince Harry has ended. Here are some of the biggest revelations in the wide-ranging conversation.

Ruling Conservative Party lawmaker Zac Goldsmith, who is the Minister for Pacific and the Environment at the Foreign Office, said Prince Harry was "blowing up his family" in a tweet on Monday.

The tweet also referenced a quote attributed to the Prince by unnamed sources in the British press.

Meghan told Oprah Winfrey that she was not close with her half-sister Samantha Markle, adding that Samantha "changed her last name back to Markle... only when I started dating Harry so I think that says enough."

In the latest clip by CBS, Meghan said it would be hard for Samantha to write a tell-all book on her "when you don't know me."

"This is a very different situation than my dad.. when you talk about betrayal, betrayal comes from someone you have a relationship with," Meghan said.

"I grew up as an only child... and I wished I had siblings," she said, adding that the last time she saw Samantha was 18 years ago.

Samantha emerged around Meghan and Harry's wedding in 2018, making headlines when she said their father, Thomas Markle, would not attend the wedding on Satu because of embarrassment over a series of staged photographs, which she encouraged him to take.

UK Prime Minister Boris Johnson declined to comment on whether Buckingham Palace should launch an investigation into allegations of racism following Harry and Meghan's interview with Oprah Winfrey.

"The best thing I can say is I have always had the highest admiration for the Queen and the unifying role she plays in our country and across the Commonwealth," he said during a press conference on Monday.

He said he has spent a long time not commenting on royal family matters, and "I don't intend on departing from that today."

During the interview, Meghan, the Duchess of Sussex, listed a number of incidents, including an unnamed person in the institution who had "concerns" over how dark her son's skin would be.

During Oprah Winfrey's interview with Prince Harry and Meghan, the Duchess of Sussex said the palace did not protect her from the press in the same way as her sister-in-law Catherine, Duchess of Cambridge.

"Kate was called Waity Katie, waiting to marry William, while I imagine that was really hard and I do... this is not the same and if a member of his family will comfortably say: "we've all had to deal with things that are rude,"" she said.

"Rude & racist are not the same," she added.

And equally you've also had a press team who go on the record to defend you, especially when they know something is not true and that did not happen to us," she said.

Winfrey as Harry if it would make a difference if his family acknowledged that Meghan's treatment in the press was different because of race. 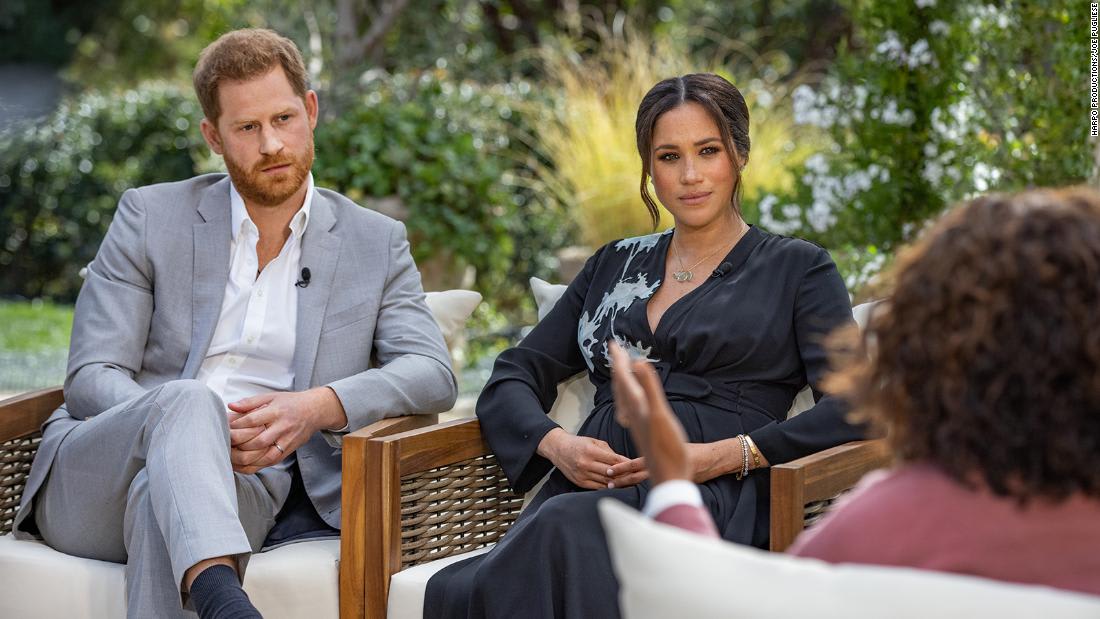 'Rude and racist are not the same': Meghan compares her media coverage to Kate's - CNN Video

Unlike the US press, the British media, especially the tabloids, are more cynical about Prince Harry and Meghan, and are "broadly sympathetic to the palace's view," CNN's royal correspondent Max Foster said Monday following a morning of furious tabloid headlines in the UK.

But to get the true measure of the British public's reaction to the Oprah Winfrey interview, we will have to wait until Tuesday, he said. The full interview is airing for the first time in the UK on Monday night.

I think the bigger response will be among Brits tomorrow," he said. "But we’re seeing the drip grab of information coming through and they are beginning to form opinions."

"But the palace is going to have to respond in some kind of way I think. They had a policy of not giving a running policy on the Oprah interview, but the allegations are huge and seismic ... I don’t know how they can avoid it," he said.

The relationship between the British press and the Sussexes was tumultuous from the start, and the couple's interview with Oprah Winfrey has reignited a heated debate about the media's handling of race.

Tennis star Serena Williams empathised with her friend Meghan in a post on Twitter, saying she knew "first hand the sexism and racism institutions and the media use to vilify women and people of color to minimize us, to break us down and demonize us. We must recognize our obligation to decry malicious, unfounded gossip and tabloid journalism."

But British media personalities and commentators hit back on Monday morning, accusing the pair of disrespecting the monarchy

"This is not necessarily just about color, it is about character and anyone like me who is White, privileged and well educated is not able to say anything without it being viewed as racist," royal biographer Anna Pasternak told the BBC, before falsely stating that White people were a minority in the UK. "We are a White minority now a days and we are silenced from speaking our truth because then it’s immediately labelled as racist.”

Television personality Piers Morgan said on Twitter that the Winfrey interview "was just another reminder that anyone who criticises Meghan Markle is automatically deemed a racist bully."

He brought up bullying allegations made against Meghan in the British media, which cited unnamed royal aides days before the Winfrey interview aired Sunday. "When she bullies her female staff or spray-guns her husband's family on global TV, it's a cry for help from a poor victim," Morgan added.

CNN polling in 2020 revealed a stark disconnect between how White and Black people in Britain perceive racism in the UK press.

The poll found that Black Britons are three times more likely than White ones to say Black celebrities were treated worse than White counterparts by the British media -- a frequent topic of debate around Meghan, who is mixed race.

In 2019, a BBC radio broadcaster was fired after posting a racist tweet about the Duke and Duchess of Sussex’s new baby. The tweet included a black and white photo of a man and woman holding hands with a chimpanzee in a suit and a top hat, with the caption, “Royal baby leaves hospital.”

During her interview with Winfrey, Meghan discussed the different standards applied to her and Catherine, the Duchess of Cambridge. Winfrey contrasted media coverage of Meghan and Kate eating avocados during their pregnancies. For Kate, it was said to be helping with morning sickness. However, for Meghan, avocados became a fruit linked to water shortages and "environmental devastation."

"I just didn't want to be alive anymore."

Meghan's powerfully honest admission in her conversation with Oprah is likely to be as explosive as Princess Diana's sit-down with the BBC's Martin Bashir back in 1995 — which helped spark a crisis that took the monarchy years to recover from.

The Duchess of Sussex's words could potentially be even more seismic than the late Princess of Wales's because the questions she raises are harder for the palace to answer.

Harry told Oprah: "What I was seeing was history repeating itself, but more, perhaps — or definitely far more dangerous, because then you add race in."

For Meghan, the feelings of loneliness and isolation that drove her to suicidal thoughts were only compounded when, in her last months of pregnancy, she was told their newborn would not be given a title. Being a prince or princess was of little consequence to the couple — except that that withholding a title meant their child wouldn't have the security that comes with it. 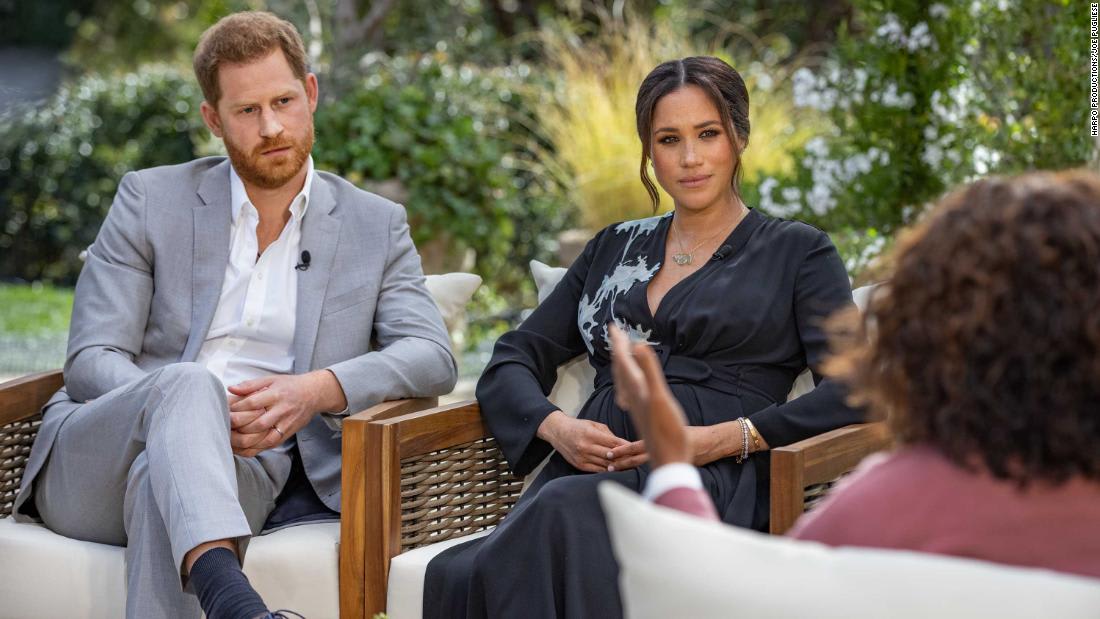 Royal News: Is Meghan and Harry's interview a bigger crisis for the monarchy than the Diana scandal?

In an interview on CBS on Monday, Oprah Winfrey said Harry told her that the Queen and Prince Philip did not take part in conversations about Archie's skin tone.

Meghan told Winfrey during their blockbuster interview that there had been several conversations within the royal family about how dark their unborn baby Archie's skin would be while she was pregnant.

Winfrey, speaking on CBS This Morning to anchor Gayle King, said Harry had told her “it was not his grandmother nor his grandfather that were part of those conversations."

Winfrey added that Harry did not reveal the identity of the family member who had made the comments.

"He didn't tell me who were a part of those conversations. As you can see I tried to get that on camera and off," she said.