In her interview with Oprah Winfrey, Meghan said that she had been silenced after she got married and joined the royal family.

It was only when she joined the institution that she understood she "wasn't being protected," she said.

"They were willing to lie to protect other members of the family, but they weren't willing to tell the truth to protect me and my husband," she said.

She added that she had been welcomed into the family, and that the family members are different from "the people running the institution."

"The Queen has always been wonderful to me," she said. On their first joint engagement, the Queen gave her a gift of pearl earrings and a matching necklace. In the car between engagements, the Queen had a blanket across her knees for warmth -- and "she said, 'Meghan, come on,' and put it across my knees as well," said Meghan. "It made me think of my grandma as well."

This post has been amended to clarify Meghan's statement on the protection offered by the royal family.

Before she met the Queen for the first time, Meghan, the Duchess of Sussex, said she was taught to curtsy.

"I thought genuinely that that was what happens outside, I thought that was part of the fanfare. I didn't think that's what happens inside. And I said, 'But it's your grandmother.' [Harry] goes, 'It's the Queen,'" she told Oprah Winfrey in the interview.

"That was really the first moment that the penny dropped," she added.

She said she practiced it quickly with Harry before the meeting and did a "very deep curtsy" in front of the Queen.

"We just sat there and we chatted. And it was lovely and easy," she said of their first meeting.

In her one-on-one interview with Oprah Winfrey, Meghan addressed the rumors that she had made Prince William's partner, Catherine, Duchess of Cambridge, cry during her wedding preparations.

The rumor had made headlines and sparked public hostility -- but it wasn't true, said Meghan. In fact, it was the other way around -- Meghan had been the one in tears.

"A few days before the wedding she was upset about something pertaining to flower girl dresses. It made me cry, it really hurt my feelings," she said.

She added that "There was no confrontation," and that she has forgiven the Duchess of Cambridge, who is known as Kate. She is "a good person," said Meghan.

"I don't think it's fair to her to get into the details of that, because she's apologized," she said -- but the hard part was being publicly and relentlessly "blamed for something I didn't do, but happened to me."

"Everyone in the institution knew it wasn't true," she said -- the institution being the royal family. When Winfrey asked why nobody had spoken up, Meghan replied, "That's a good question."

Meghan and Harry got married three days before the royal wedding that captured the world's attention, Meghan revealed on her interview with Oprah Winfrey.

The vows framed in their home shows the two of them during their private wedding, Meghan said.

Life now in their new home has been "really fulfilling," she added -- the couple has been able to focus on "getting back down to basics."

Meghan, Duchess of Sussex, started her interview with Oprah Winfrey by discussing her wedding day and what it was like to enter the royal family.

The wedding was an "out of body experience," she said. She had woken up that morning, listened to the "Going to the Chapel" song -- but all the while, she and Harry were aware that "this wasn't our day -- this was the day that was planned for the world."

"I went into it naively because I didn't grow up knowing much about the royal family," she said. "It wasn't part of conversation at home it wasn't something we followed ... I didn't do any research. I've never looked up my husband online," she said.

She didn't know much about the British royals beforehand, she said -- her mother didn't even know about Princess Diana's bombshell interview. "What do you know about the royals? It's what you read in fairy tales," Meghan said.

Prince Harry and Meghan, the Duchess of Sussex, announced they were stepping back from their roles as senior royals in January 2020, explaining on Instagram that they hoped to "carve out a progressive new role within this institution."

Under the terms brokered by the palace, the couple had to step back from their royal duties, including military appointments and would no longer represent the Queen. The arrangement -- which would go into effect in the spring -- also saw them drop the titles His and Her Royal Highness and they would no longer receive funds for royal duties.

"It brings me great sadness that it has come to this. The decision that I have made for my wife and I to step back is not one I made lightly," Harry said shortly after the announcement while speaking at a charity event in London. "It was so many months of talks after so many years of challenges. And I know I haven't always got it right, but as far as this goes, there really was no other option."

He added, "What I want to make clear is we're not walking away, and we certainly aren't walking away from you. Our hope was to continue serving the Queen, the Commonwealth, and my military associations, but without public funding. Unfortunately, that wasn't possible."

Hints of unhappiness in court documents: Meghan disclosed in court documents from her successful invasion of privacy case that she felt "unprotected" by the monarchy during her first pregnancy, in the face of "a large number of false and damaging articles."

The legal documents were the first time Meghan had publicly indicated her unhappiness at the support Palace staff were providing to her. More specifically it disclosed a hint of her frustration at the royal protocol not to respond to speculative media reports.

Move to Los Angeles: As the end of the one-year transition period drew closer, friction reignited between the Sussexes now based in Los Angeles and the royals back home in the United Kingdom.

It was announced that Harry and Meghan had agreed with the Queen that they would not be returning as working members of the family. As a result, their honorary military appointments and royal patronages were revoked and would be redistributed.

Oprah Winfrey's interview with Prince Harry and Meghan is airing now on CBS.

Oprah's interview with Harry and Meghan was pre-taped, and CBS has teased preview clips over the past several days.

Viewers in the United States can watch the interview on CBS broadcast stations or online at CBS.com.

By the time the sun rises in the UK on Monday, the public will have a new perspective from Harry and Meghan, the former senior royals, on the machinations of the palace.

This week has already seen a frenzy of stories citing unnamed sources and royal commentators but the Palace has adhered to its usual protocol of silence in the face of the speculative reporting surrounding the broadcast.

It did, however, announce Wednesday it would investigate allegations that Meghan bullied members of staff, claims made anonymously in a British newspaper that the Sussexes' spokesperson dismissed as "a calculated smear campaign."

"It's no coincidence that distorted several-year-old accusations aimed at undermining The Duchess are being briefed to the British media shortly before she and The Duke are due to speak openly and honestly about their experience of recent years," their statement added on Wednesday.

The more keenly anticipated TV special falls at an already fraught time for the royals, with Prince Philip, the Queen's 99-year-old husband, spending a third week in hospital, having undergone a heart procedure on Thursday.

But the royals likely know from history the impact the televised spectacle could have. The palace encounters a bombshell TV tell-all roughly once a generation; a 1970 interview with the abdicated King Edward VIII and Wallis Simpson posed problems for the Palace, 25 years before Princess Diana's "Panorama" confessional was watched by tens of millions in Britain. 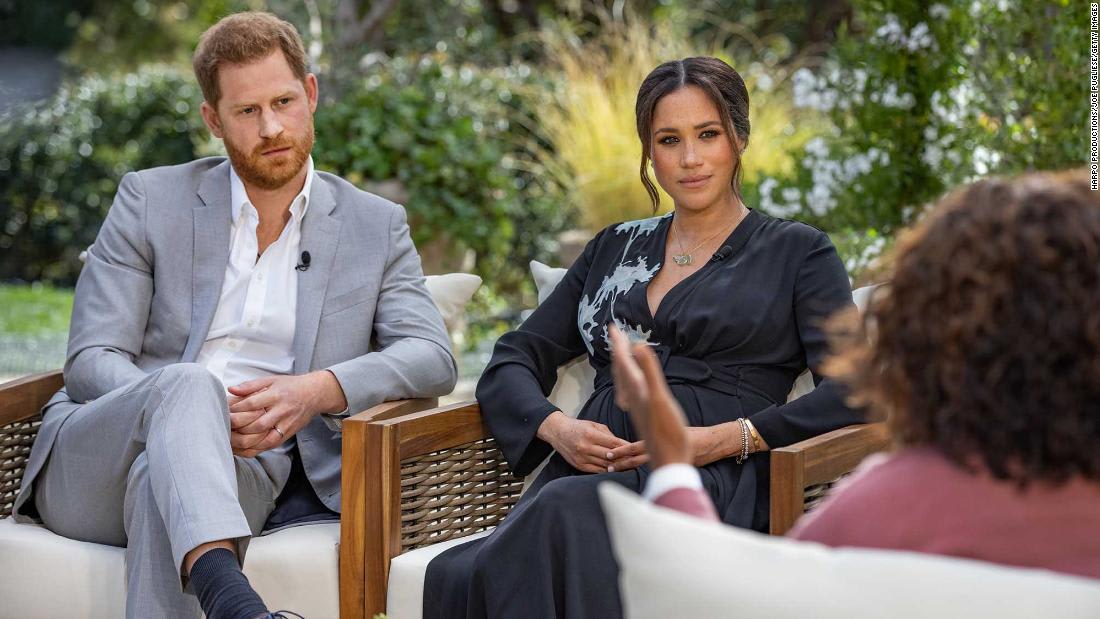 World waits for a made-for-TV bombshell, as Harry and Meghan sit down with Oprah

The primetime event of the couple's Oprah interview threatens to lift the lid on a litany of frustrations and grievances held by the couple against the institution they quit last year.

Prince Harry and Meghan, the Duchess of Sussex, have fought multiple legal cases against publications and photo agencies that had printed details of their private lives.

Earlier this year Meghan won a privacy claim against the publishers of the Mail on Sunday after they published a letter she sent her father, and launched a stinging rebuke to "dehumanizing" media organizations after the verdict, saying the "damage they have done and continue to do runs deep."

"It has been unbelievably tough for the two of us, but at least we had each other," Harry told Winfrey in another promo clip, drawing parallels between their experience and that of his mother, Princess Diana, who was similarly exiled from the royals in the 1990s.

The door was closed on a potential return for the pair as working royals earlier this year.

But even that announcement was shrouded in tension; Harry and Meghan's statement that "service is universal" was widely seen as a rebuke of the Palace's framing of events, after the Queen confirmed that "in stepping away from the work of the Royal Family, it is not possible to continue with the responsibilities and duties that come with a life of public service."