Thirty-five-year-old Lloyd Griffiths lives and works in London. He told CNN that he was traveling on a bus when he saw an altercation taking place on the street.

"it was very, very traumatizing. A horrible experience," Griffiths said a little while ago. "I was actually on my phone before. Then I realized there was an altercation happening so I kind of pressed record.

At that moment, I kind of saw -- it looked like a shine of light come across from the man on the floor and I realized quickly it was a knife, the sun was shining on the knife. It was a relatively large knife."

He continued, "And very quickly, there's at least one member of the public to help and then the police went over with some guns and it ended with the man being shot."

Restaurants in Borough Market area have been closed up following the incident near London Bridge on Friday afternoon. CNN say tables left in a state of disarray as diners picked up their belongings and left in a hurry.

A man was shot dead by police following an attack on London Bridge on Friday, the Metropolitan police assistant commissioner Neil Basu said in a press conference.

Police are treating the attack as terror related, Basu said, adding that the suspect had a hoax explosive device strapped to him.

Simon Shorey and his family are on a day trip to London from Sussex, an area south of the capital. After grabbing a bite to eat at Gourmet Burger Kitchen (GBK) in Clink Street, they had planned on visiting the Shard tower. But their lunch was interrupted by the incident and they were told to hide under tables.

“The whole restaurant had people under their tables and sat down on the floor," he told CNN. He says people were trying to keep updated with the latest developments on their phones and the atmosphere started to calm down.

"It seemed to suggest it was all over and then after 25 minutes it felt like it kicked off again," he continued. "There were people running down the street just outside the windows of the restaurant. They weren’t screaming at that time but people were running back down and after a few more minutes we were told ‘everyone out, everyone out.”

Shorey praised police for their handling of the situation.

"We have three young kids and the police were able to smile and keep the calm. I don’t know what’s going on but clearly it’s not over.”

Sadiq Khan, Mayor of London, has now tweeted out a longer statement thanking emergency services for their response on Friday afternoon.

London's Metropolitan Police have released another update, saying that "a number of people have been stabbed." 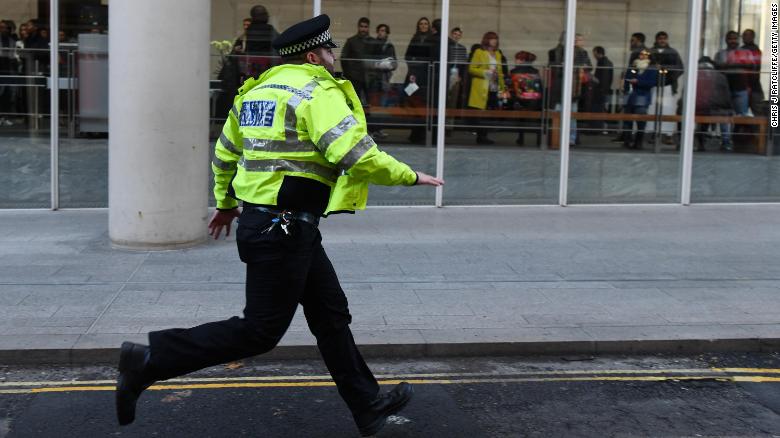 Owen Jones, a columnist for the Guardian, was by London Bridge when this incident started to unfold on Friday afternoon.

“I was about to cycle across London Bridge," he explains to CNN. "This was just minutes after the incident had unfolded and ... all the emergency services were arriving at that point."

Jones says he realized the incident was serious when he "cycled into a police cordon as it was being unfurled."

Jones said the area around London Bridge remains cordoned off and the area is evacuated.

London's Metropolitan Police are expected to make a statement at the top of the hour from outside Scotland Yard.

London's Metropolitan Police Service says on Twitter that their officials are responding to the incident "as though it is terror-related."

They also clarified that one man has been shot. The person's identity was not immediately clear.