The leaders of UK opposition parties met on Thursday to discuss a plan to stop Prime Minister Boris Johnson from taking the country out of the European Union without a deal. They will meet again on Monday.

They've agreed their priority was to stop a no-deal and said that any proposal to hold an election without a locked-in block of a no-deal would not get through parliament.

Labour said it wants to hold an election as soon as no-deal is blocked.

Prime Minister Boris Johnson has finally addressed the outpouring of criticism following the heated debate in Parliament on Wednesday.

Speaking to the BBC, Johnson said:

We must deplore any threats to anybody, particularly female MPs.
Tempers need to come down, and people need to come together because it's only by getting Brexit done that you'll lance the boil, as it were, of the current anxiety and we will be able to get on with the domestic agenda."

However, the PM doubled down on his use of the phrase "surrender act" to describe the law that Parliament passed to prevent the UK from crashing out of the European Union without a deal. The law requires the PM to ask for an extension to Brexit if he cannot get a new deal with the European Union.

Labour MP Jess Phillips -- who hours ago asked an urgent question about political rhetoric and the safety of MPs -- says a man has been arrested after calling her a "fascist" and trying to "kick the door" of her constituency office.

"I've only just heard about it myself but my staff had to be locked into my office while the man tried to smash the windows and kick the door," Phillips told London radio station LBC.

"I don't know what I can say because the man has been arrested," she added.

Phillips has spoken frequently about abuse she has suffered as an MP. Earlier Thursday, she criticized Boris Johnson in the House of Commons after the Prime Minister dismissed concerns about lawmakers' safety.

Boris Johnson's spokesman said the Prime Minister was "disappointed" that MPs voted against allowing the Conservative Party a recess for their conference next week.

"For many years it has been the case that Parliament has been in recess so that parties can hold their party conference," the spokesman said, according to the PA.

The vote was the seventh consecutive defeat for Johnson in Parliament, out of seven.

"As the Prime Minister has made clear, the Conservative Party conference will go ahead as planned," the spokesman added.

The government's request for a recess during the Conservative Party conference has been rejected by MPs.

Lawmakers voted down the motion by 306 votes to 289, in what can clearly be read as a message to Boris Johnson after his efforts to prorogue Parliament.

MPs are voting now on a motion for a conference recess, which would enable Conservative lawmakers to attend their annual event in Manchester next week.

Normally, that request would be entirely routine -- but given that Boris Johnson has no majority and has infuriated lawmakers by unlawfully trying to proroguing Parliament for five weeks, it could be awkward this time.

One former Tory MP, Nick Boles -- who quit the bloc over its Brexit strategy earlier this year -- has said he's switched from abstaining to voting against the request.

Boles explained he wants Johnson to face Prime Minister's Questions next week after his "behavior" yesterday.

It remains to be seen how many on the opposing benches will join him, but if only a chunk of MPs abstain, the motion should pass.

Boris Johnson's sister, Rachel Johnson, has condemned the Prime Minister's language in the House of Commons.

"My brother is using words like 'surrender' and 'capitulation' as if the people standing in the way of the blessed will of the people, as defined by the 17.4 million votes in 2016, should be hung, drawn, quartered, tarred, and feathered," Johnson told Sky News. "I think that is highly reprehensible."

"I think it was particularly tasteless for those who are grieving a mother, MP and friend to say the best way to honor her memory is to deliver the thing she and her family campaigned against -- Brexit," she added on her brother's comments about Jo Cox.

"It was a very tasteless way of referring to the memory of a murdered MP, who was murdered by someone who said 'Britain first,' obviously of the far-right tendency, which is being whipped up by this sort of language."

Rachel Johnson has been a critic of Brexit, and stood as a candidate for the pro-EU rebel bloc The Independent Group for Change at this year's European elections.

"The language that leaders use matters, because it sets the tone for public debate," Jo Swinson said.

"I'm sure I'm not alone in looking across the Atlantic, at the rallies of crowds of people chanting 'lock her up' about Hillary Clinton, or 'send her back' about Ilhan Omar -- and by the way, it is no coincide that it is women who are often the targets of this hate, and especially women of color -- and see worrying echoes in our own politics of that Trumpian approach," Swinson said.

"And so I ask the minister whether he can give any assurance that there will be no deliberate campaign to use that kind of language to inflame, but I fear he cannot -- because the repeated use of those inflammatory words by the Prime Minister yesterday was, it seemed, very obviously deliberate."

Kevin Foster responded: "I think we all want to see an environment where everybody feels they can take part."

"While I've never voted for him, seeing a group of people chanting 'Tony Blair can f-off and die' is something we would all condemn," he added, on the issue of rallies of Trump supporters chanting about political opponents. 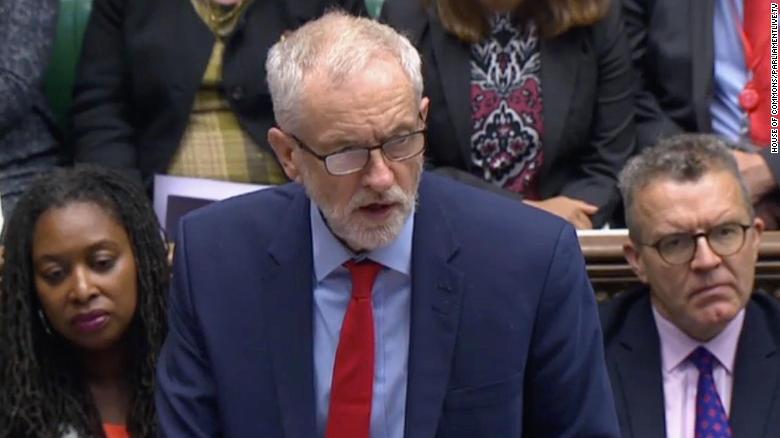 "It's extremely disappointing that the Prime Minister has not respected this House by attending here today," Corbyn said, noting Johnson's absence from the discussion about his rhetoric. "The Prime Minster's language and demeanor yesterday was frankly nothing short of disgraceful."

"Three years ago, our colleague, our member Jo Cox was murdered by a far-right activist shouting, 'Britain first! This is for Britain,'" Corbyn added.

"The language that politicians use matters, and has real consequences."

Corbyn said that he has written to all Labour MPs expressing his solidarity and setting out the conduct "expected of all colleagues."

"No side of this House has a monopoly of virtue. Inappropriate language has been used by all sides," Corbyn noted. "But we all have a duty to keep our debates political."

"Not only should the Prime Minister comply with the law, he should come to this House and apologize for his conduct yesterday, which fell well below the standards expected by the people of this country," Corbyn said, to cheers from his benches.