Text by Maggie Hiufu Wong and illustrations by Anastasia Beltyukova, for CNN
Updated 5:13 AM EDT, Fri September 30, 2016
Link Copied!
Cool travel jobs hiring right now —
If you're a barber with a sense of adventure, the US Antarctic research center McMurdo Station is currently looking for an on-site hairstylist.
Anastasia Beltyukova
McMurdo Station —
McMurdo (pictured) is one of several Antarctic bases regularly recruiting support staff, from chefs to firefighters.
Handout/Getty Images Europe/Getty Images
Big cat caretaker —
For people who want to spend time taking care of big cats, Turpentine Creek Wildlife Refuge in Arkansas offers a six-month Exotic Cat Internship for 12 candidates twice a year.
Anastasia Beltyukova
Kitty treats —
Responsibilities include creating birthday treats and hosting parties for rescued Bengal tigers like Sierra, pictured.
courtesy Turpentine Creek Wildlife Refuge
Director of toughness —
Outdoor gear brand Columbia is hiring two "directors of toughness" who can "test gear in the most unforgiving conditions on Planet Earth and then tell the world about it." Interviews will be held in tough-to-reach locations around the world.
Anastasia Beltyukova
Elves wanted —
Santa Claus Village in Lapland hires extra elves to work at its post office in both winter (November to March) and summer (June to August).
Anastasia Beltyukova
Sorting letters —
In addition to selling special stamps and souvenirs, they -- and potentially you -- wear elf clothes and Christmas hats and sort letters for Santa next to a cozy fireplace.
courtesy Santa Claus' Main Post Office
What shall we do with the hungry sailors? —
The Royal Navy of the United Kingdom is looking for a hard-working, adventure-loving submarine chef with a good sense of humor.
Anastasia Beltyukova
HMS Artful —
A Royal Navy submarine like the newly commissioned HMS Artful could be the successful applicant's new home.
ANDY BUCHANAN/AFP/AFP/Getty Images
Lighthouse keeper —
Tasmania Parks & Wildlife Service offers a range of volunteer caretaker programs, including a three-month stint as a lighthouse-keeper on the usually uninhabited Deal Island. Some candidates prefer the winter months, when they don't have to meet anyone.
Anastasia Beltyukova
Northern light spotter —
Finland's Arctic Snow Hotel was recruiting this month for a northern lights spotter. The role was snapped up, but there's still a slim chance of getting a position as a receptionist, maid or guide.
Visit Rovaniemi
Live-in housekeeper at Buckingham Palace —
This could be your new pad if you get the job as live-in housekeeper at London's Buckingham Palace. The application deadline is September 30.
Matt Cardy/Getty Images Europe/Getty Images

Unusual job vacancies that might appeal to travelers include Antarctic hairdresser

Decommissioned lighthouse keepers, 'director of toughness,' among others

Moving to a deserted island or to Santa Claus Village for a job?

Whether you’re looking for a change of scenery or a different lifestyle, here are some roles for globetrotters and adventure-seekers that could make a weird but interesting addition to your resume.

Hardworking elves go through about half a million letters for Santa every year.
Anastasia Beltyukova

Can’t get enough of Christmas? Here’s the position for you.

Santa Claus Village in the Arctic Circle (near Rovaniemi, Lapland) hires extra elves to work at its post office in both winter (November to March) and summer (June to August).

In addition to selling special stamps and souvenirs, they – and potentially you – wear elf clothes and Christmas hats and sort letters for Santa next to a cozy fireplace.

Post elves are responsible for opening the 500,000 or so letters that arrive for Santa and checking for a return address.

“Santa usually replies to mails from kindergartens and school classes, but also to a few thousand individual children all around the World,” Riitta, one of the post elves, tells CNN.

Elves are usually hired through the official recruitment page of Finland Post from late September to October.

The “most important requirement is that you can speak many languages (on top of fluent Finnish and English),” says the post elf.

MORE: Defrosted Finland: How a land of ‘sorrow’ got happy

Chef in a submarine

The newly commissioned submarine HMS Artful could be your next office/kitchen.
Anastasia Beltyukova

If you’re a claustrophile who dreams of traveling underwater for months, then the Royal Navy of the United Kingdom has a job for you.

It’s looking for a submarine chef with a sense of humor, who is hard-working and adventure-loving.

Although it requires “no specific qualifications,” it’s an important position for keeping morale high among the crew.

“The truth is, for a submarine crew, meals will be something to look forward to and at the very core of your vessel’s well-being,” says the Royal Navy.

Good physical and metal stamina are valued higher than the ability to cook – in fact, the requirements makes no mention of cooking experience other than having a passion for food.

MORE: Personal submarine: Is this the world’s coolest hotel perk?

Lighthouse keeper on a deserted island

Some candidates prefer the winter months so they don't have to see anyone.
Anastasia Beltyukova

Australia has a smart and economical way of keeping remote nature spots well maintained while providing a complete city escape for loners.

Tasmania Parks & Wildlife Service offers a range of volunteer caretaker programs where the post-holders take charge of a wild destination for up to six months.

One of the hottest is a three-month lighthouse keeper position on Deal Island, a usually uninhabited spot in Bass Strait.

Volunteers will guard the highest (but disused) lighthouse in Australia. They’re preferably nature-loving, good with their hands and don’t mind bringing their own food supplies to last the full three months.

The keepers are also expected to perform duties from weeding to welcoming occasional visitors in summer.

The island doesn’t have any shops or pubs. So this is a chance to enjoy nature – the island’s majestic cliffs, wildlife and sandy beaches – in solitude.

Caretakers on Deal Island are housed in the old lighthouse keeper’s hut but some gigs require volunteers to prepare their own accommodation too.

Mount Field, where there are plentiful waterfalls, alpine areas, glacial lakes, rainforests and wildlife, is one remote station where volunteers are asked to bring their own tent or camper van.

McMurdo Station in Antarctica is hiring a hairstylist.
Anastasia Beltyukova

The British Antarctic Survey, an institute that delivers and enables research in the polar regions, was recently hiring a physical oceanographer to spend a few months venturing into the Antarctic on its supply and research ship RRS James Clark Ross.

But don’t give up yet if you don’t have postdoctoral experience in physical oceanography.

Various bases in Antarctica are constantly looking for supporting staff, from chefs to firefighters.

For example, McMurdo Station – a US Antarctic research center on Ross Island – is looking for a hairstylist (preferably with experience in military cuts). 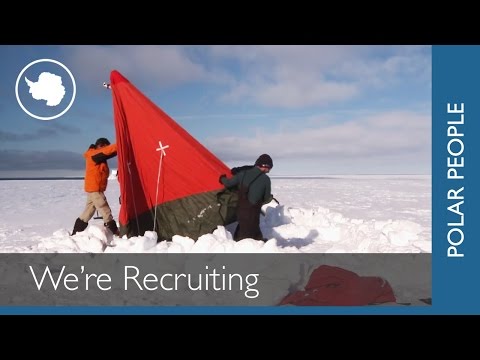 Extreme gear tester in ‘the most unforgiving’ destinations on earth

Your first challenge will be to reach the interview location.
Anastasia Beltyukova

Outdoor gear brand Columbia is hiring two “directors of toughness” who can “test gear in the most unforgiving conditions on Planet Earth and then tell the world about it,” says its recruitment page.

Successful candidates – who will ideally be world travelers, glacier climbers, social media junkies as well as photographers – will become brand ambassadors and beta testers for nine months with salaries of $39,000.

Getting the chance to interview is itself a challenge.

First there’s the online fight to get a spot when registration opens.

Interviews will be held in hard-to-get-to locations around the world and getting there will require candidates to “hike, scramble, sweat, and more,” the brand says.

There are four rounds of interviews in total.

The first one, already closed, was held at Mount Hood Wilderness in Oregon.

Registrations for candidates on the US East Coast (September 30) Canada and the United Kingdom (October 3) are coming soon.

The Aurora Borealis lit up skies in Reykjavik this week.
@xingqiaoyan/ Instagram

Reykjavik was plunged into darkness on Wednesday so that residents and visitors could enjoy a particularly spectacular display of the Aurora Borealis.

The responsibility of this selfless role is to stay awake through the night during freezing weather as low as minus 35 C and alert hotel guests to the arrival northern lights so they don’t have to wait up.

The hotel, fitted with glass igloos and a snow hotel that sleeps 70 guests, opens only from December to March each year.

The role was snapped up quickly this year, but earlier this month the hotel said on its Facebook page that there were still vacancies for receptionists, maids and guides.

Given the popularity of the light-spotter job, though, likelihood of success are similar to snowflake’s chances in front of the hotel fireplace.

If you love big kitties, head to Arkansas.
Anastasia Beltyukova

For people who want to spend time taking care of big cats, this US facility offers a six-month Exotic Cat Internship for 12 candidates twice a year.

Turpentine Creek Wildlife Refuge is a 459-hectare home in Arkansas for abused or abandoned big cats – including tigers, lions, black leopards and African servals – and some other mammals.

Candidates, preferably with a degree in a related field or experience with exotic animal care, will be responsible for building shelters, taking care of the animals, keeping a record of their behavior and educating the public about the animals in residence.

“Our interns care for our animal residents on a daily basis and form a type of bond with a lot of them,” says Ike Wever, promotions coordinator of the refuge.

“They learn the animals’ characteristics, quirks and personalities, and the relationship that forms is one of mutual understanding, appreciation, trust and respect.”

It can be an fraught job, warns Wever.

“It’s emotionally challenging because sometimes we experience our highest highs and our lowest lows all in one day,” Wever tells CNN.

“We may celebrate the rescue and/or arrival of a new animal on the same day we mourn another who has passed from old age.”

Application for the next spring position (beginning February 2017) ends November 1, 2016.

You could attend (to) the next banquet at Buckingham Palace.
SHAUN CURRY/AFP/AFP/Getty Images

OK, so this one isn’t really a job for travelers, but the successful candidate does get to live in one of the London’s most-visited landmarks.

The most loved royal family in the world is looking for a live-in assistant housekeeper at Buckingham Palace, Queen Elizabeth and Prince Philip’s weekday residence and the British monarch family’s administrative headquarters.

Housekeeping skills and a keen attention to details are some of the criteria the Queen is looking for.

Downton Abbey wannabes will be responsible for cleaning, caring for the historic interiors and art pieces, and looking after guests of the palace.

With an honorable return of possible royal sightings and lodgings on-site, you don’t expect a big paycheck from the Queen – just $21,800 per annum.

The deadline is September 30, so you’d better be quick.

MORE: Fancy living in Buckingham Palace? This is your chance