By Thom Patterson, CNN
Updated 6:53 AM EDT, Wed July 29, 2015
Link Copied!
The Experimental Aircraft Association AirVenture in Oshkosh, Wisconsin, draws an estimated half-million people and 10,000 aircraft every year. Click through to see the highlights from 2015.
THOM PATTERSON/CNN
Goodyear's new Zeppelin airship "Wingfoot One" appeared at Oshkosh this year for the first time since its 2014 launch.
THOM PATTERSON/CNN
"FIFI" is a World War II-era bomber that's billed as the only flying B-29 Superfortress.
Thom Patterson/CNN
The Oshkosh airshow featured the Perlan 2 glider, which is designed to set an altitude record for piloted, sustained fixed-wing flight.
THOM PATTERSON/CNN
Jim Payne plans to pilot the experimental Perlan 2 glider to a record height of between 90,000 and 100,000 feet in 2016.
Thom Patterson/CNN
The world's newest airliner, the Airbus A350XWB, stopped at Oshkosh during its tour of North and South America.
THOM PATTERSON/CNN
A test pilot put the A350XWB through its paces over tiny Wittman Regional Airport. Maneuvers included tight turns and low passes over the airfield. The super-efficient airliner seats more than 300 passengers. American Airlines is set to be the first carrier in North America to fly it, beginning in 2017.
THOM PATTERSON/CNN
FAA air traffic controllers call Oshkosh the "Super Bowl" of air traffic control. Special teams are created each year to add extra layers of safety. They have to handle about 10,000 aircraft that fly into and out of the airport during the week.
THOM PATTERSON/CNN
On July 17, Air Force Reserve Maj. Jeremy Holt was the first pilot to land a giant B-52 bomber at Oshkosh. Despite a very short runway, he touched down safely, thanks to careful planning and preparation.
THOM PATTERSON/CNN
Experimental aircraft like this 2001 Seawind 3000 are a big part of the week at Oshkosh.
THOM PATTERSON/CNN
Oshkosh also features new aircraft, like this ICON A5, a portable, amphibious two-seater described by some as a "Jet Ski with wings."
THOM PATTERSON/CNN

"Wingfoot One" is longer, faster and more nimble than older blimps

For the first time in generations, this aviation icon shifts to a new design

That’s what I’m thinking as I stand under the looming shadow of Goodyear’s new Zeppelin. The helium inside this gigantic thing makes it repel gravity. Its natural inclination is to rise.

This week, this airship has been floating over an estimated half-million people at the Experimental Aircraft Association AirVenture air show in Oshkosh, Wisconsin.

Now, I’m actually about to fly on it! 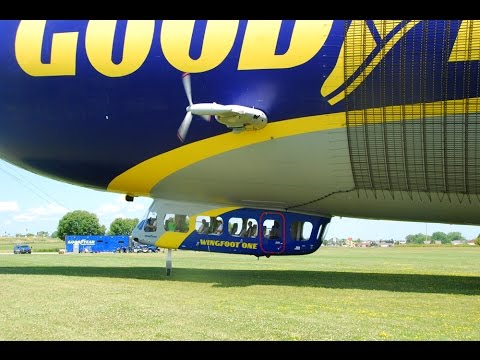 As the airship’s metal gondola hovers just a couple of feet off the grass, I can see two pilots in the cockpit. At the back, a set of folding steps extends to the ground as if to say, “Welcome aboard Wingfoot One.”

Just the fact that an actual Zeppelin is flying at Oshkosh this year is a treat, even for the most jaded of aviation enthusiasts. The word Zeppelin conjures up visions from 1930s newsreels of huge airships cruising above the Atlantic.

Zeppelins also remind me of the Hollywood fantasy portrayed in the Jude Law film “Sky Captain and the World of Tomorrow.” It seemed like everyone in that 2004 movie had their own airplane or blimp.

I strap myself in along with a handful of other aviation adventurers, including Goodyear Vice President Pierre Jambon.

When it comes to lighter-than-air ships, this ain’t my first go-round.

In December, I spent New Year’s Eve flying 2,000 feet above Atlanta in an older, non-Zeppelin Goodyear blimp called the GZ20A. I even got to spend a few minutes steering it with my hands and feet.

Goodyear's older models are based on a 45-year-old design.
courtesy goodyear

But this flight is going to be a new thrill. Here’s why:

More room: The difference between the older blimp’s gondola and the gondola in the Zeppelin is like night and day.

Seating on the old model was cramped for a maximum of seven passengers. But this new cabin comfortably holds a dozen people. And it’s the first Goodyear blimp with seat belts.

And there’s a cozy little alcove in the rear that offers beautiful panoramic views. On the old blimp, you could actually open the windows and get a nice whiff of whatever was below. Not here. On the Zeppelin, these windows are sealed.

The gondola of Goodyear's new Zeppelin airship seats 12, which is five more than its predecessor.
THOM PATTERSON/CNN

It’s got a restroom. Goodyear’s older blimps were not outfitted with such “modern conveniences” as “indoor plumbing.”

Finally, after decades of holding it during six-hour flights, passengers and crew can safely and privately take a whiz aboard the Goodyear Blimp. And, thanks to a big window, this powder room’s got a pretty nice view! (No, I didn’t test it, thank you very much.)

New @GoodyearBlimp Wingfoot One has a restroom that today offers a 500 ft view of #OSH15 (and no, I didnt test it) pic.twitter.com/ltSyX3XHlJ

More power: Three “thrust-vectored” engines allow the airship to maneuver a little like a helicopter. Because it’s filled with helium, the Zeppelin is always trying to float upward. But pilots in this new airship can swivel these engines so the propellers are pointed up, pushing the airship toward the ground.

The old version’s two engines didn’t swivel. When it was close to the ground, the blimp was harder to control. A stiff wind was all it took to make it buck like a bronco. Controlling that bronco required a ground crew to hold it with ropes.

With the new Zeppelin, there’s none of that. Not only is the angle of the engine adjustable, pilots can fine-tune the angle of the propellers themselves, tweaking the airship’s position even further.

@thompatterson @GoodyearBlimp I didn't realize how sophisticated a simple Blimp is

More power makes this airship faster than the old model, which moseyed along at a maximum 50 mph. Unfortunately, today our pilots won’t demonstrate this aircraft’s maximum speed of 73 mph. They’ve got us cruising at a respectable 26 mph.

Reid said he reached 110 mph last year when he piloted Wingfoot One on its maiden flight. “We actually hit a record for me personally,” he said. “We had a really good tailwind on it.” Reid says that when you’re in the cockpit, it handles like a machine that really wants to fly.

Better controls: In the old blimps, pilots steered using controls connected to steel cables that moved the rudder and elevators at the back of the aircraft.

These new Zeppelins are controlled electronically with “fly-by-wire” technology that makes them much easier and more reliable. Pilots have a handy cockpit monitor that shows them the real-time configuration of all the parts that steer the Zeppelin.

Goodyear pilot Mike Dougherty explains how to fly the new Wingfoot one Zeppelin! 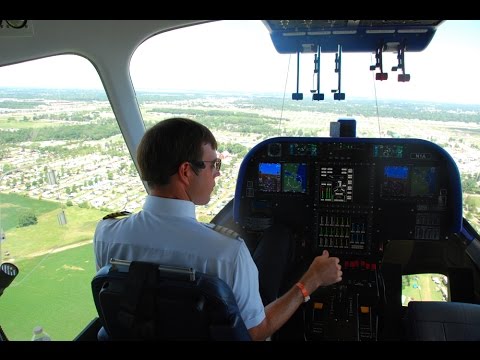 Longer profile: Wingfoot One is 50 feet longer than the old blimps.

It’s not a blimp: But Goodyear wants to call it one anyway.

Experts are annoyed by this because these Zeppelins have an internal skeleton, which by definition makes them “semi-rigid dirigibles.” Blimps don’t have skeletons.

But Goodyear likes the word “blimp.” The company has pretty much owned that word for generations now, and it’s not letting go. “It’s recognizable as an icon, and that’s never going to change,” Dougherty said.

Goodyear’s new aircraft are indeed built by the same company that made the famous airship that burned in 1937, killing 36.

But Goodyear’s Zeppelins are much smaller and filled with helium, not the more flammable hydrogen that Hindenburg used.

In fact, the pilots joke that the only thing Wingfoot One has in common with the old blimps is the helium. Goodyear’s remaining two older models are expected to be replaced by Zeppelins by 2018.

Goodyear plans to switch out its remaining two blimps with new Zeppelins by 2018.
THOM PATTERSON/CNN

When the airship levels out, we’re allowed to get up from our seats and “move freely about the cabin,” as they say.

The view outside these extra-large windows is nothing short of spectacular. I can see giant tents and colorful airplanes parked at the air show below. Flying below us, I spot vintage aircraft, experimental planes and helicopters. Off in the distance, Lake Winnebago shimmers in the sun.

@thompatterson @GoodyearBlimp COOL. I could stay up there ALL DAY!

It’s hard to describe, but there really is something about this kind of flying that sets it apart from airplanes or helicopters. It’s something wistful and romantic, in a different way.

“Lighter-than-air seems to be a category of aircraft that captures people’s imaginations,” Jambon said.

“It’s peaceful; it’s slow; it’s a wonderful experience. Will there be an airship renaissance? Anything is possible, but I wouldn’t predict that,” he said. “But the legacy of Goodyear in designing and building and operating airships is over 100 years old – nearly as old as the company. So that’s a connection that we feel strongly attached to.”

After a while, this sightseeing tour is over. It’s time to take our seats, strap in and prep for something special: a pitch landing. Dougherty puts the Zeppelin into a 30-degree downward pitch toward our landing zone.

Whoa! We can definitely feel it.

Yep, this new airship may be more sophisticated than its predecessor, but when it wants to, it can still get a little sassy.