Communities across the USA ring in each year with local (and awesomely quirky) variations on Times Square’s Ball Drop, along with plenty of other things to do.

In this West Georgia town, which was once called “Possum Snout,” a stuffed possum is lowered inside a ball festooned with lights from one of Tallapoosa’s oldest buildings.

This celebration on Alabama’s Gulf Coast honors the iconic Southern snack made of marshmallow and graham cracker and covered in chocolate.

Festivities start with the cutting of the world’s largest edible MoonPie and a second-line parade, followed by musical performances before the 600-pound electric MoonPie drops.

The 6-foot illuminated aluminum pine cone is lowered from the roof of the historic Weatherford Hotel twice: first at 10 p.m. to coincide with New York’s Times Square celebration, and again at midnight to mark Arizona’s big moment.

10 great places to spend New Year's Eve around the world

A cluster of grapes seemed the appropriate centerpiece for a New Year’s celebration in Southern California wine country.

Partygoers begin to gather at nightfall for live music, before the grapes descend with both an East Coast and West Coast countdown.

Leave it to Key West to come up with multiple, eccentric drops.

One: A stewardess takes flight

A restaurant in a historic building known as the birthplace of Pan American World Airways hosts the newest soiree in Key West’s busy New Year’s Eve lineup. First Flight Island Restaurant & Brewery pays homage to its aviation roots with a Gatsby-themed party culminating in the descent of a makeshift airplane carrying a Pan Am flight attendant, or stewardess as they were called in the defunct airline’s heyday.

“Sushi” descends in a giant red high heel shoe from the balcony of the New Orleans House. VIP balcony tickets usually sell out fast, and Duval Street is jammed with people who party into the wee hours.

Two: Lowering of the pirate wench

Visit the tall ship America 2.0 at Schooner Wharf and brace for cannon blasts that herald the new year. You can watch the pirate wench be lowered from the top of the ship while listening to live music and enjoying the scene at Schooner Wharf Bar.

The conch shell is an enduring symbol of Key West, and this drop happens above Sloppy Joe’s, probably the most famous bar in Key West. Thousands gather to enjoy this annual tradition. If you’re not big on crowds, avoid this one.

The Ocean Key Resort has a fake Key lime wedge splashing into a giant margarita glass.

If you can’t make it to the Smokin Tuna Saloon before midnight, you can try watching their tuna cam for a live stream of its tuna drop.

Party central of the Florida Panhandle has two countdowns.

The first one is at 8 p.m. for the younger crowd, in which 10,000 inflatable beach balls are dropped from overhead, followed by fireworks. The second one is the midnight countdown, which involves an 800-pound LED-lit beach ball being lowered for the countdown to the new year, followed by more fireworks.

Both take place at Panama City Beach’s Pier Park, and musical acts are lined up. 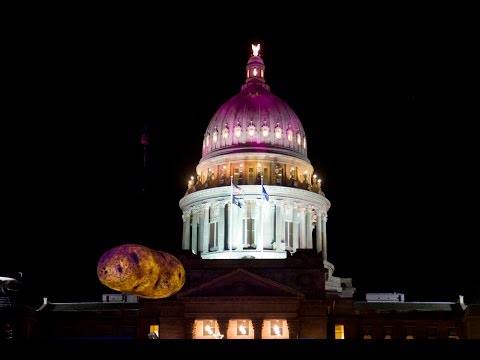 Idaho welcomes “SpecTaters” (their words, not ours) to the capitol building in Boise for its annual potato drop.

In addition to the fireworks and potato drop (the slogan is #DropItLikeItsHot), revelers can enjoy wrestling matches, an ice sculpture show, snow park, live music and a dance floor. And there’s plenty of food and drink vendors on hand. 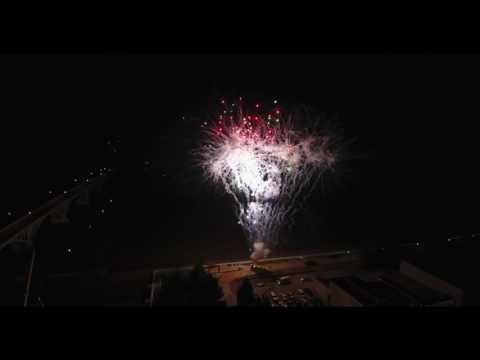 But instead of slowly lowering a glittering sculpture of a melon (boring!), they drop a bunch of actual watermelons that plummet toward the ground and burst open upon a raised wooden “splatform.”

You can also catch live music in a heated tent in this southwestern Indiana town on the shores of the Wabash River across from Illinois.

Krumpe’s Do-nuts is a local institution in Hagerstown, Maryland, known and loved for its sweet treats since 1934.

They eat what? New Year's food traditions around the world

The muskrat has been trapped for pelts and meat for generations in the Chesapeake Bay region, making it a prime candidate for New Year’s Eve mascot. Unlike in other events that use replicas, Marshall Muskrat is the real deal: a stuffed muskrat in top hat and cape.

The Las Cruces Chile Drop debuted on December 31, 2014, as an homage to chili growers in the region and New Mexico.

Thousands of revelers pack this eastern North Carolina town each December 31 to watch the Mt. Olive Pickle Company celebrate the new year by dropping a 3-foot glowing pickle down a flagpole into a pickle tank.

Along the Ohio shoreline of Lake Erie, Port Clinton reels in the New Year with a 20-foot, 600-pound Fiberglas fish modeled after the town mascot, Wylie the Walleye.

Since 1996, residents of the self-proclaimed Walleye Capital of the World have braved freezing temperatures for Walleye Madness at Midnight. Festivities begin in the afternoon and culminate in the lowering of Wylie before midnight, followed by fireworks.

Residents of Lebanon, Pennsylvania, ring in the New Year by cheering on a massive cylinder of sandwich meat. After all, it’s a longstanding point of pride in the region that bologna made in Lebanon is not your average Oscar Mayer fare.

Organizers promise dancing and food as part of festivities, including, of course, free bologna sandwiches.

The result of an Eagle Scout project by a Mechanicsburg Area School District graduate, this small town west of Harrisburg dropped its first wrench on New Year’s Eve in 2004.

Since New Year’s Eve 2011, an oversized pair of brightly lit flip-flops has been dropped in Folly Beach, near Charleston, in honor of the coastal community’s signature footwear.

The Big Cheese Drop in Plymouth, Wisconsin, honors the region’s history as former home of the National Cheese Exchange, which helped establish cheese prices until 1955.

The 80-pound metal wedge, which is lowered from a 100-foot truck ladder, is dairy free, but organizers hand out complimentary bags of cheese wedges to the first 250 families in attendance.

A giant 800-lb peach is the centerpiece of the celebration, as a symbol of the state’s official fruit.

The home of the marshmallow candy brand rings in the New Year with a giant replica of its iconic sweet treat. Weighing around 400 pounds and standing four feet and nine inches tall, the chick drops at a kid-friendly time of 5:15 p.m.