The abandoned airport terminal where everything still works

By Chris Sloan, CNN
Updated 10:54 AM EDT, Sun July 18, 2021
Link Copied!
Louis Armstrong New Orleans International Airport (MSY): New Orleans' international airport opened its modern new "Jet Age" terminal in 1959.
Courtesy New Orleans Aviation Board
Moisant International Airport: It was originally named for the aviator John Moisant, who died in a crash at the site in 1910.
Courtesy New Orleans Aviation Board
The name game: It became New Orleans International Airport in 1961 and Louis Armstrong New Orleans International Airport in 2001.
Courtesy New Orleans Aviation Board
Architecture: The striking mid-century design was by the firm Goldstein, Parham and Labouisse with Herbert A. Benson and George J. Riehl.
Courtesy New Orleans Aviation Board
Hurricane Katrina: In 2005, the building's darkest and finest hour was as a shelter and staging area during Hurricane Katrina.
Mario Tama/Getty Images
Closure: The terminal closed in November 2019. CNN Travel went to visit 18 months later.
Chris Sloan
"Satchmo": The iconic nine-foot-high Louis Armstrong sculpture which presided over the vintage parabola structure, welcoming the masses of humanity, was still there.
Chris Sloan
Ghost airport: It was once the bustling location of emotional embraces, reunions and farewells, and late passengers breathlessly running to make their flight.
Chris Sloan
Memories: "My very first flight was out of this facility when I was seven years old," says Kevin Dolliole, the airport's director of aviation.
Chris Sloan
Eerie: "And having worked here over the years, having all of the memories of the hustle and bustle in this facility," says Dolliole. "It was really strange and almost sad to see it in a state like this."
Chris Sloan
Anybody home?: CNN found the lights and air conditioning on. The whole place was spotless, even in the still functioning restrooms.
Chris Sloan
Powered down: It wasn't quite dead, but wasn't quite alive either. CNN was hard-pressed to find any detritus, save for a sole unprinted boarding pass.
Chris Sloan
What next: Much of the 1.2 million square feet terminal will eventually meet its demise, with the original 1950s-era departures hall and Concourse A and B being the first to fall to the wrecking ball.
Chris Sloan
Bit by bit: "Our architectural team is going through the building figuring out how to break down a building with multiple generations of construction," says Jamie McCluskie, the airport's deputy director of aviation.
Chris Sloan
Empty apron: A passenger hadn't set foot in the place nor a jet parked on one of its gates since a few months before the Covid pandemic.
Chris Sloan
Pieces of the past: For those interested in owning an old ticket counter, a baggage claim carousel, gate chairs, or even a jet-bridge; there will likely be a public auction.
Chris Sloan

“The first thing you notice about New Orleans are the burying grounds – the cemeteries – one of the best things there are here” wrote Bob Dylan in his 2004 book “Chronicles: Volume One.”

“Going by, you try to be as quiet as possible, better to let them sleep… The past doesn’t pass away so quickly here.”

The legendary American folksinger wasn’t thinking about the virtually abandoned airport terminal at New Orleans Louis Armstrong International (MSY), but his words certainly are apposite. While not dead yet, the old MSY is currently stuck in quiet purgatory.

In November 2019, just months before the Covid pandemic swept the world, New Orleans inaugurated its gleaming new $1.3 billion airport terminal, which speaks more to where the Crescent City, then celebrating its Tricentennial, was headed for the next 300 years than wallowing in its past.

Architecturally speaking, the ultramodern César Pelli-designed terminal is an international gateway that might look more at home in Bahrain than the Bayou.

In its 20 months in operation, the new MSY has won praise from passengers and pundits, with USA Today naming it “one of America’s three top airports in 2020.” This, even after the devastation to the aviation industry wrought by the pandemic.

On the south side of the airfield, “The City That Care Forgot” has all but forgotten its old airline terminal.

It was the bustling location of countless tourists toasting their Mardi Gras trip with one last Hurricane, emotional embraces of reunions and farewells, and late passengers breathlessly running to make their flight. The building’s darkest and finest hour was as a shelter and staging area during Hurricane Katrina. Now it lies in repose.

On its final day of operations on November 5, 2019, nearly 15,000 people flowed through its doors. As the last flight out neared, New Orleans laissez le bon temps rouler one last time, sending the tired 61-year-old edifice off in style with a traditional jazz funeral second line parading throughout the terminal.

As is tradition, when the deceased is laid to rest – or “the body is cut loose” – the mourners cut loose too. 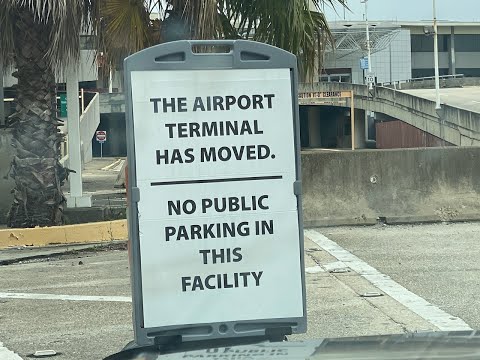 In MSY’s case, the mourners weren’t actually mourning but were passengers joining in the impromptu celebration while others looked on in bemusement. The passengers boarding the last departure out, a Southwest Airlines flight to Tampa, Florida, just after 9 p.m., struck up a rousing rendition of “When The Saints Go Marching In.”

With the hard cutover to the new terminal just hours away, work crews loaded the last of airline signage, computer terminals, concession supplies, and TSA security equipment into an armada of moving vans – bound for their new home.

By midnight, with its raison d’être done, the curtain had come down on the South Terminal on Airline Drive which abruptly and hauntingly became a ghost town.

Kevin Dolliole, a native New Orleanian and the airport’s director of aviation, has a whiff of nostalgia when describing what it’s like when he steps from his new 21st-century airport showplace back in time to the old facility where the airport’s administration offices still remain.

“My very first flight was out of this facility when I was seven years old,” he says. “And having worked here over the years, having all of the memories of the hustle and bustle in this facility it was really strange and almost sad to see it in a state like this.”

A year and a half since it closed, I paid a visit to a forlorn old friend I’d last seen on its last day as a functioning airline terminal.

A passenger hadn’t set foot in the place nor a jet parked on one of its gates since that last 2019 flight before the world changed.

I’d expected to find a deserted shell with old tickets, unsold magazines, and beignet crumbs strewn about. I imagined a dark, moldy space with clocks frozen in time, and evidence of a last-minute evacuation, much like I’d seen at another deserted airport I’d visited years before, Colorado’s Denver Stapleton.

Instead, New Orleans, a city that reveres its past, has cleaned and temporarily preserved the city’s old front door – a stay of execution, before the inevitable. I found the lights and air conditioning on. And it was cleaner than I’d ever seen it. Spotless. Even in the still functioning restrooms.

It wasn’t quite dead, but wasn’t quite alive either. The flight screens were all dark and powered down. Check-in desks were devoid of signage, stanchions, kiosks… and people. I was hard-pressed to find any detritus, save for a sole unprinted boarding pass. The former rumbling baggage claim belts were stopped in their tracks.

Where once TSA checkpoint screening equipment, personnel and interminable passenger lines had stood, was now clear and empty space. The jetways, though still intact, were empty portals to nothingness. The bars and restaurants cleared out of their last Abita beer and Lucky Dogs, with nary a discarded bottle or napkin left behind.

The iconic nine-foot-high Louis Armstrong “Satchmo” sculpture which presided over the vintage parabola structure, welcoming the masses of humanity, was still there. But his ebullient expression belied a loneliness that comes with no one to welcome.

Apart from a layer of dust, what was left behind was almost perfectly preserved. Curiously there were canned airline public address announcements still occasionally echoing through the air: “Curbside is used for loading and unloading only.”

It was as if the rapture had happened. Or Stephen King’s “The Langoliers” was fact, not fiction.

Much of the 1.2 million square feet terminal will eventually meet its demise, with the original 1950s-era departures hall and Concourse A and B being the first to fall to the wrecking ball in the next 18-24 months. This isn’t as easy as it seems.

“Our architectural team is going through the building figuring out how to break down a building with multiple generations of construction that makes it a little bit complex”, says Jamie McCluskie, the airport’s deputy director of aviation, planning and development.

The Old MSY still exhibits a faint pulse. Much of the building continues to be maintained and powered up because the airport’s administrative offices, emergency operations center, law enforcement offices, and maintenance and carpentry shops remain here; and will for some time. Their move across the campus was delayed by the pandemic.

The sprawling capacious terminal has found a temporary second life as a location for TV and film productions which provides a revenue stream. The shows shot here include “NCIS: New Orleans” and adventure reality game show “The Amazing Race.” The airport director says with a laugh that he “tried to convince the producer to put clues in my office, but they didn’t end up going for it.”

In May 2021 it was also turned into a temporary skate park, when skate crews from across the southern states gathered for a skate jam as part of the Red Bull Terminal Takeover.

A skater performs a kickflip as part of the Red Bull Terminal Takeover held in May 2021.
Jonathan Mehring/Red Bull Content Pool

In fact, part of the terminal will be preserved and repurposed, including the iconic 1959 parabola dome structure.

“In New Orleans we have a lot of value for historic buildings and it certainly has a lot of history. So we’re all for retaining that as part of future development plans”, said McCluskie. The relatively new Concourse D, which opened in 1996, will be repurposed for charters and possible uses for private operation. The parking structures and rental car facilities will remain permanently in place as well.

For those interested in owning an old ticket counter, a baggage claim carousel, gate chairs, or even a jet-bridge; there will likely be a public auction. Yes, history has proven there are actually enthusiastic buyers for these concourse castoffs. Just check eBay.

With a small hemmed-in site area of 1,700 acres, redevelopment of the current terminal’s footprint is crucial to the economic future of the airport and region. The airport is in the midst of a 20-year master plan that seeks to redeploy that real estate into space for hangars, cargo, a logistics hub for companies like Amazon and UPS, and even light rail. “We’re going to be very prudent about how we go about this and be very thoughtful looking forward”, says Dolliole.

As he oversees the long, slow goodbye to the old MSY, Dolliole knows the time has come in spite of his affection for it. “The new terminal kind of makes you forget about the old one. I just sold a car that I had owned and loved for 13 years. I almost cried when I walked away from it. But the first time I drove its replacement, I forgot all about that old car.”